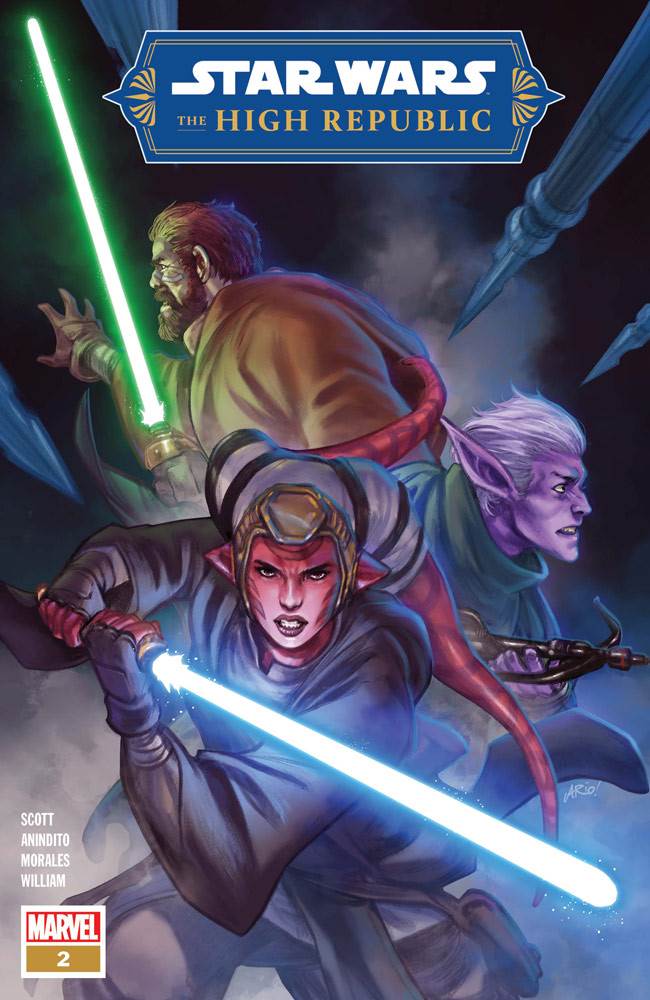 Last month’s premiere issue of Star Wars: The High Republic’s second-phase Marvel comic book ended with a shocking cliffhanger– the apparent death of noble Jedi Knight Vildar Mac, who had only just been introduced to readers. I was incredibly intrigued by this turn of events, and thought it was a memorably bold way for writer Cavan Scott to launch this new chapter of High Republic storytelling.

So naturally I found myself just a tiny bit disappointed when, near the beginning of the title’s second issue– released today– it is revealed that Vildar Mac in fact survived the supposed dark-side attack, and lives to fight another day on the Pilgrim Moon of Jedha. It just felt like a fake-out, and a waste of a good jumping-off point, considering the implications of said death. 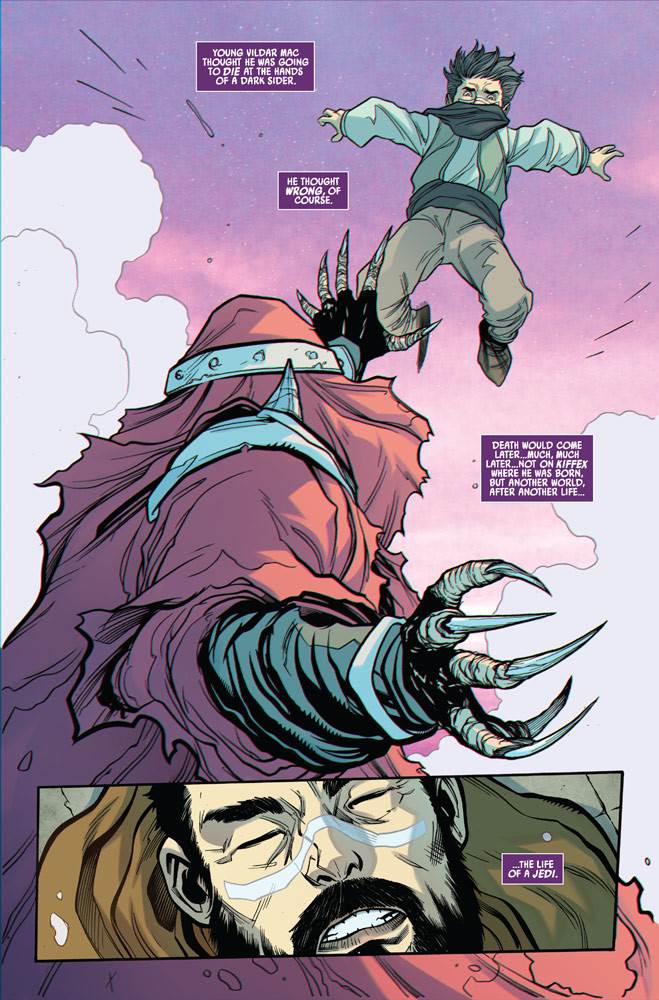 But fortunately Scott is a talented enough writer that the deception didn’t bother me for too long, especially once we started to learn more about the being who did the deceiving. Investigating the attack, Vildar and his associate Padawan Matthew Cathley track their suspect to a bar called Enlightenment, where the bouncers are menacing hulks named the Twinkle Sisters (can I get action figures of them, please?)– but not before encountering the Path of the Open Hand (see the excellent young-adult novel Star Wars: The High Republic – Path of Deceit for more on that particular cult) in the streets of Jedha City. I’m really enjoying how the High Republic authors made sure we knew who the Path were and what they were capable of before introducing them into the comics, and it was pretty interesting to see them confront two Jedi in the holy city. But as of yet that was just a brief detour on the way to Enlightenment, where Mac discovers from the amiable bartender Kradon that his assailant was no dark Force user, but “righter of wrongs” Tey Sirrek– a member of the Sephi species, capable of temporarily incapacitate others. It turns out that the Jedi and Tey are on the same side in their attempts to solve the disappearances of religious artifacts, so the three end up in a street fight against a Condluran named Briff who deals in exotic objects. While this lead doesn’t quite pan out the way Tey had hoped, he does spot a Kyber statue among Briff’s collection, which points the trio of investigators toward the Temple of Kyber– home of the order known as the Guardians of the Whills (remember them from Rogue One: A Star Wars Story?) and another tantalizing cliffhanger. Disregarding the fact that I was a tad let down by the bait-and-switch death at the beginning of this comic, I remain impressed by Cavan Scott’s ability to keep things moving at a brisk pace and artist Ario Anindito’s skill at rendering this title’s characters and locations in appealing ways. I wrote last month about how pleased I am to be spending more time on Jedha, and in this new issue Scott and Anindito proved that they are willing to explore the nooks and crannies of the Pilgrim Moon as we learn more about how it and its denizens operate. Tey Sirrek is definitely a compelling character so far, and I’m looking forward to learning more about him as the story goes on– the teaser for next issue says the “truth” about him will be revealed, so that sounds promising. But mostly I’m enjoying being immersed in this world among the various Force sects– all of which seem to have their own fascinating backstories– as the mystery continues to unfold. Star Wars: The High Republic #2 is available now wherever comic books are sold.