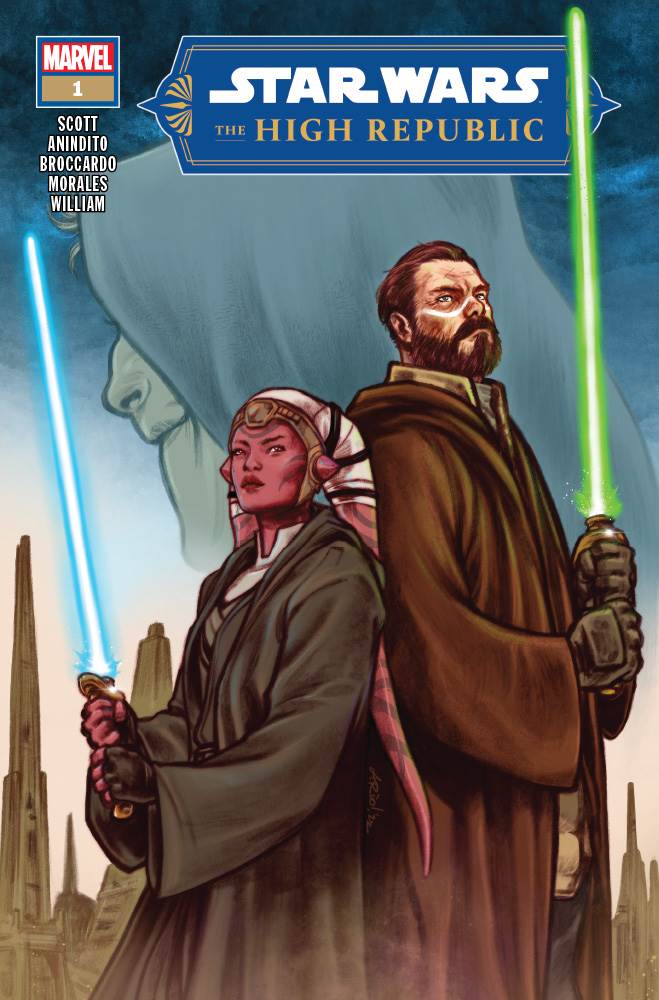 In Lucasfilm’s 2016 film Rogue One: A Star Wars Story, we were introduced to– and, SPOILER ALERT, had to almost immediately bid farewell to– the moon of Jedha (also known as the Pilgrim Moon, the Cold Moon, and the Kyber Heart, according to Wookieepedia)– basically a stand-in for the holy city of Jerusalem in A Galaxy Far, Far Away.

At that point, many fans such as myself were so intrigued by Jedha as a concept that we’ve been clamoring for a deeper exploration of the moon’s past and inner workings ever since. We did get a brief taste of what Jedha was like in the aftermath of the Death Star’s attack via the first volume of Marvel’s current-canon Star Wars comic book, but it wasn’t until now that we’re really getting the deep-dive we’ve been hoping for. Enter Phase II of Lucasfilm Publishing’s multi-platform initiative Star Wars: The High Republic, which launched earlier this month with a new young-adult novel and today saw the release of its first new comic book issue. The High Republic’s second phase is set 150 years before its first, and that means writer Cavan Scott has again been tasked with introducing another entirely new cast of characters for this comic. The great news is that Scott– as always– does a terrific job of this, starting us off with flashbacks to Jedi Vildar Mac’s youth and a showdown with a member of the dark-side sect known as the Sorcerers of Tund. We then flash to the “present” of this title, where Vildar is still haunted by the PTSD of that incident. Mac arrives on Jedha, where he meets a young Padawan named Matthea Cathley (she goes by Matty) who shows him around the city. Here we get a taste of the conflict between the various religious faiths on the Pilgrim Moon, and it’s instantly rewarding to get so much information about the many ways people interpret the Force in this period of the galaxy. Some of this information has been out there already, of course, but I love seeing it spelled out in this way and getting to spend time with members of each denomination. There’s an altercation in the streets after a so-called “Truthsayer of Bpfassh” is called out for being a supposed charlatan during his stage show, which culminates in Vildar chasing an opportunistic pickpocket off down the city’s winding alleyways. After losing track of the thief, the real panic sets in when another Sorcerer of Tund appears to calm the disturbance in the marketplace, setting off Mac’s unhappy memories once again. But this Sorcerer is merely a delegate to the Convocation on Jedha (essentially a council of Force-based religions intended to foster unity between faiths), and Vildar must quickly learn to put aside his animosity if he’s going to endure his new surroundings. Matty brings him to a shrine and explains that religious artifacts have been going missing lately (tying in with the new High Republic novel Path of Deceit), and there’s a fantastic cliffhanger of a twist ending to this installment that I won’t spoil here. We also get a supplemental story involving another Jedi’s role as mediator in the Convocation– seriously, I love getting all this information about how these organizations function on Jedha– and the reintroduction of the scoundrel Sunshine Dobbs (also from Path of Deceit) to the story. Gosh, this phase of The High Republic is already off to a wonderful start, though I could have easily predicted that Scott’s comic-book contribution would be one of its strongest elements. I also have to mention artists Ario Anindito and Andrea Broccardo, whose illustrations instantaneously drew me back into this world after this summer’s hiatus. What more can I say except that if this title remains this excellent throughout the run of Phase II, we’re all in for a real treat. Star Wars: The High Republic #1 is available now wherever comic books are sold.