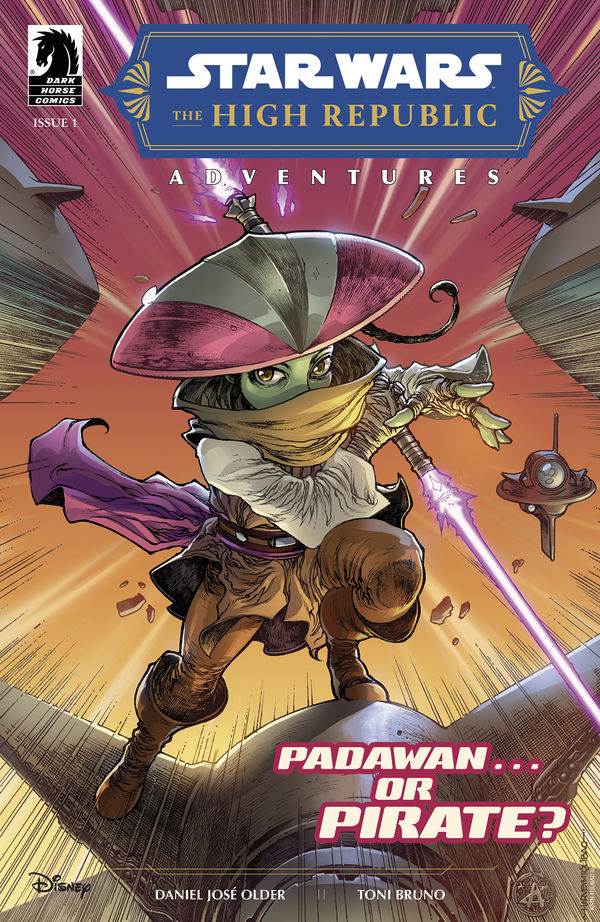 Now, as Dark Horse Comics takes over publication of The High Republic Adventures, Older (not to mention the rest of The High Republic’s creative team) has rewound time 150 years to find Sav Malagán as a Padawan in training under Jedi on the same planet. 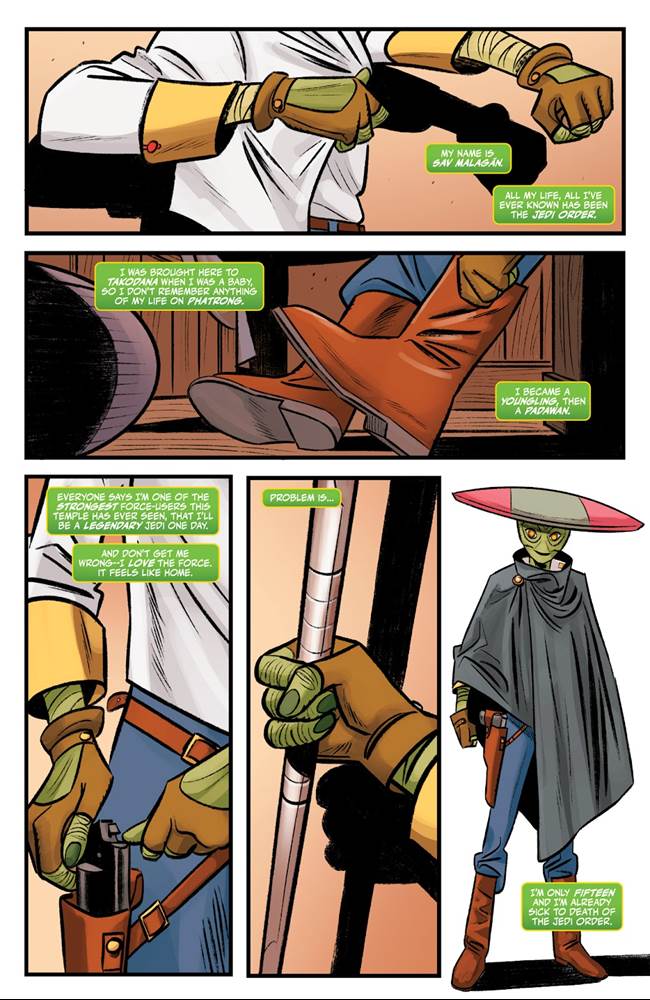 Malagán, decked in almost Wild West-style garb with knee-high boots and a sarape covering her torso, holsters her blaster and sets out into the Takodana night, having grown tired of the rules and regulations of the Jedi Order. In the cloak of darkness, the Padawan likes to sneak out of the local temple and make her way across the lake to the castle of pirate queen Maz Kanata (first seen in 2015’s Star Wars: The Force Awakens), where the dregs of the galaxy hang out. There, Sav just wants to soak in the atmosphere, stir up a little trouble, and hopefully become recognized as one of the regulars, but she soon finds herself wrapped up in a covert investigation that could uncover a threat to Maz’s livelihood and the castle’s very existence. But the big surprise for me in reading this debut issue of The High Republic Adventures’ second phase is the inclusion of Dexter Jettster (Obi-Wan Kenobi’s Besalisk buddy from Star Wars: Episode II – Attack of the Clones) as a heavily featured character. I’m not sure if Dex’s presence was something that was advertised beforehand, but if not it’s certainly a pleasant surprise. 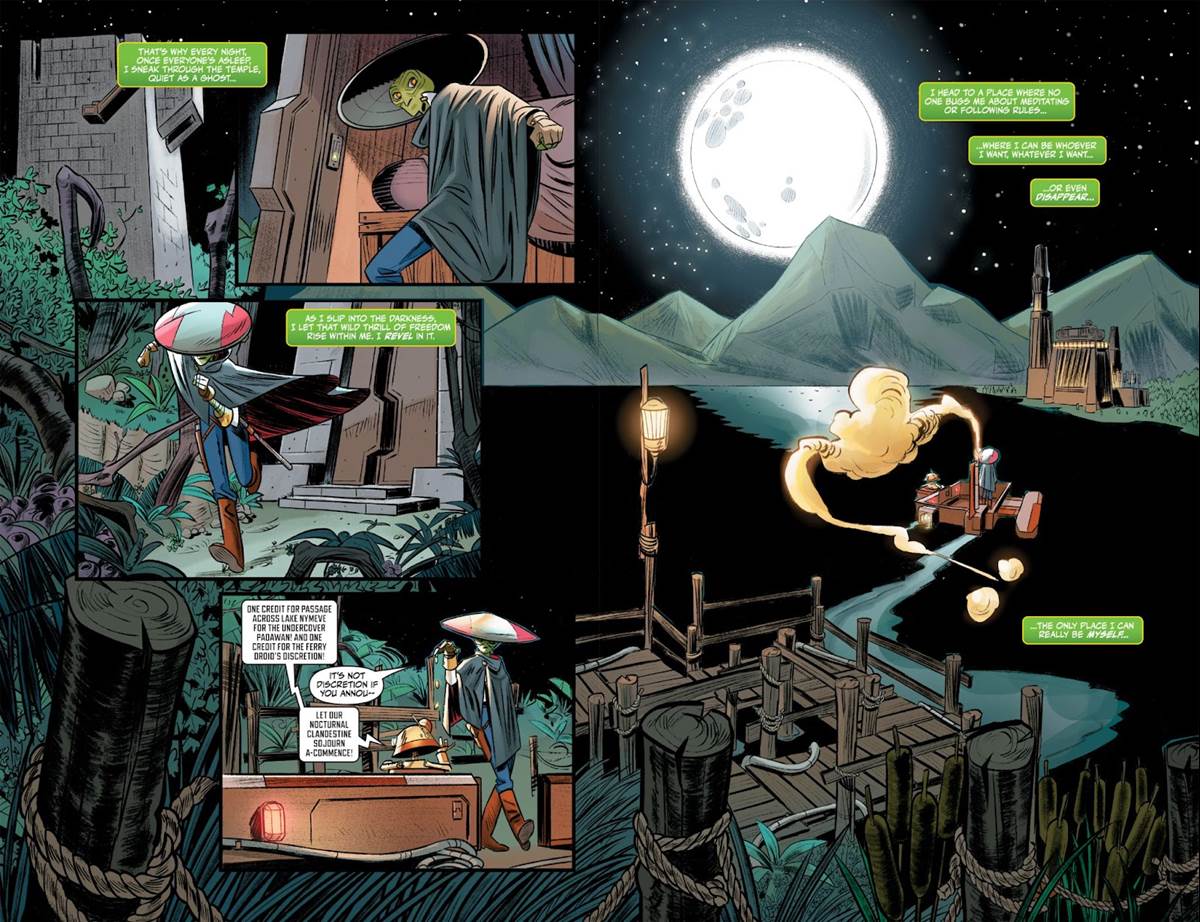 As Sav, Dex, and the rest of Maz’s crew embark on a quest to protect Takodana from a siege by a group called the Dank Graks, we get to experience Older’s trademark playful tone in a setting that feels wholly appropriate. I think The High Republic Adventures has turned out to be the perfect venue for the writer’s often irreverent, offbeat approach to Star Wars, and so far I’m enjoying seeing him have fun with the material again as this title launches in a new era. The artwork by Toni Bruno (who is carrying over from penciling and inking a few issues of Phase I) feels right as well, striking a suitable balance between cartoonish and grounded in the Galaxy Far, Far Away that we’ve come to know and love. Plus, the world of Takodana itself is so ripe for exploration. It’s a place where we haven’t spent a whole lot of time since we first saw Rey and Finn visit Maz’s castle, and I have a feeling the planet holds a lot of secrets left to be uncovered, especially in this period set hundreds of years before the Skywalker Saga. And last but not least, I have to mention the squeal of excitement I let out when I saw that Older and Bruno have included Therm Scissorpunch– an excellently named background alien from Solo: A Star Wars Story– as a player here. I bet it’s going to be a whole lot of fun getting to see Therm in action alongside these other, more familiar characters. This issue is a promising kick-off to Phase II, indeed. 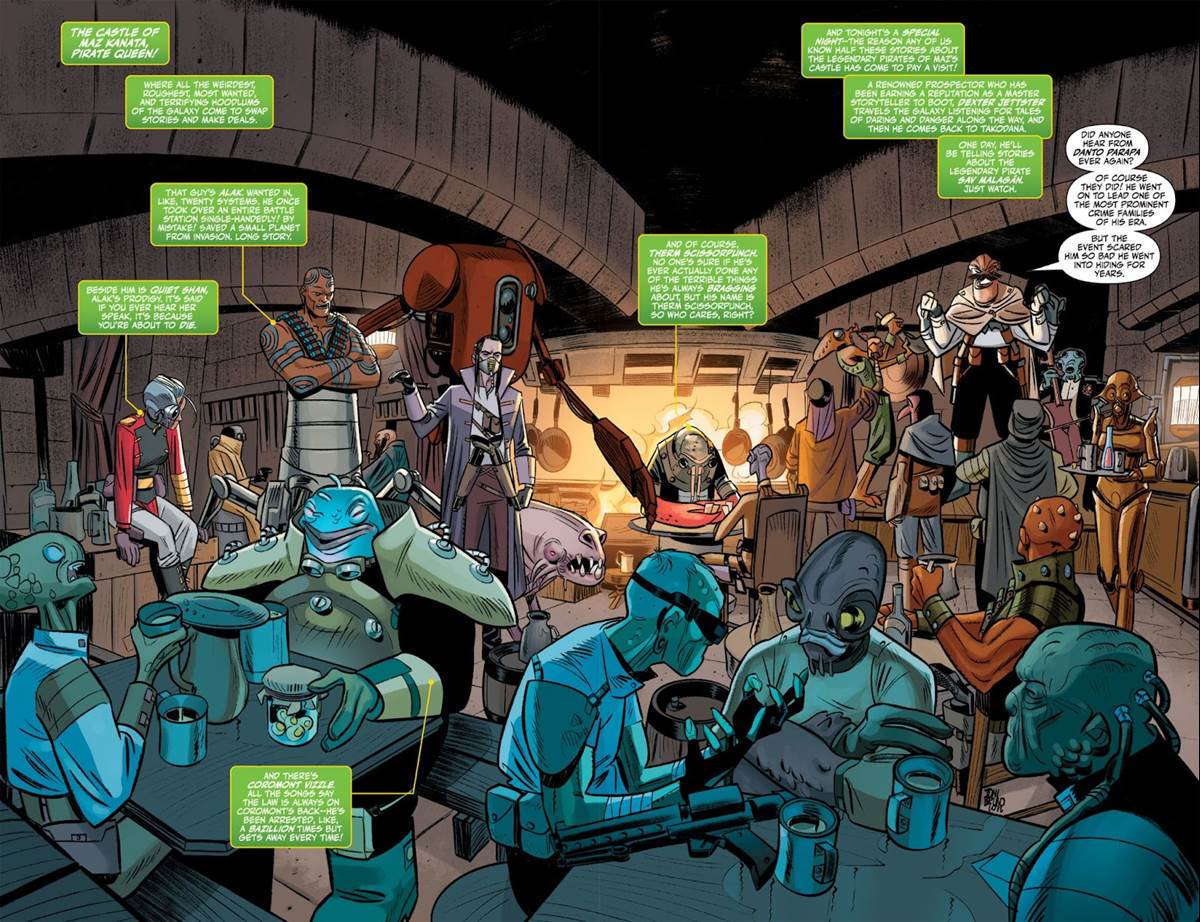