I’ve called “The Prisoner” my favorite self-contained episode of The Mandalorian’s first season– it’s really skillfully directed (and co-written) by Rick Famuyiwa, it’s got plenty of fun character beats, and for my money it has the best action scenes that show off how good the title character actually is at his job.

So naturally I was excited to see what the talented writer/artist team of Rodney Barnes and Georges Jeanty came up with in adapting “The Prisoner” from the television screen to the comic book page in Marvel’s Star Wars: The Mandalorian #6. 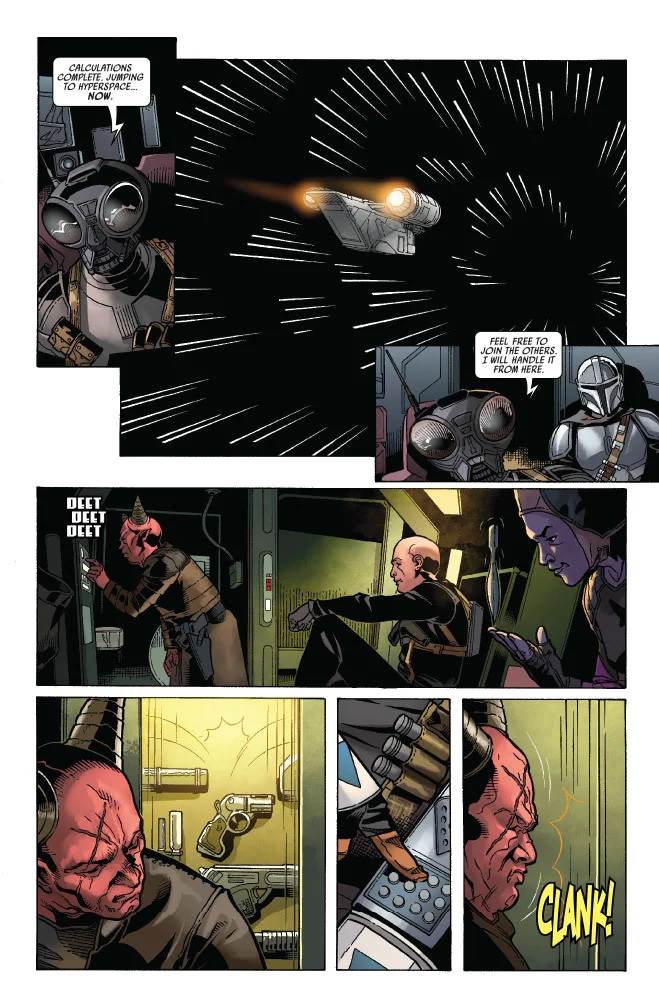 And I’d say things get off to a pretty good start in this issue: Barnes finds the right pacing for Mando’s arrival at Ranzar Malk’s Roost space station, and I enjoyed revisiting the introduction to all the characters we meet there– Jeanty’s likenesses of Migs Mayfeld, Burg, and Xi’an may not be 100% photo-real to the actors (namely Bill Burr, Clancy Brown, and Natalia Tena) who played them in the show, but they do capture the spirit of those personas perfectly. Even Zero the droid feels right… I can almost hear British comedian Richard Ayoade’s voice coming out of his vocabulator. And I think Act II feels right on target as well– in case you don’t recall, this episode is about Mando being recruited by Ran to join the crew in rescuing their captured comrade aboard a New Republic prison transport. First they have a briefing aboard the Roost, then they travel through hyperspace on the Razor Crest, then they arrive at their destination, where they must combat a number of security droids before freeing Xi’an’s brother Qin from his cell. The only major hiccup they encounter is a living, breather New Republic soldier, who covertly triggers a homing beacon before he is killed by Xi-an, endangering the mission unless Mayfeld’s crew can escape in time. 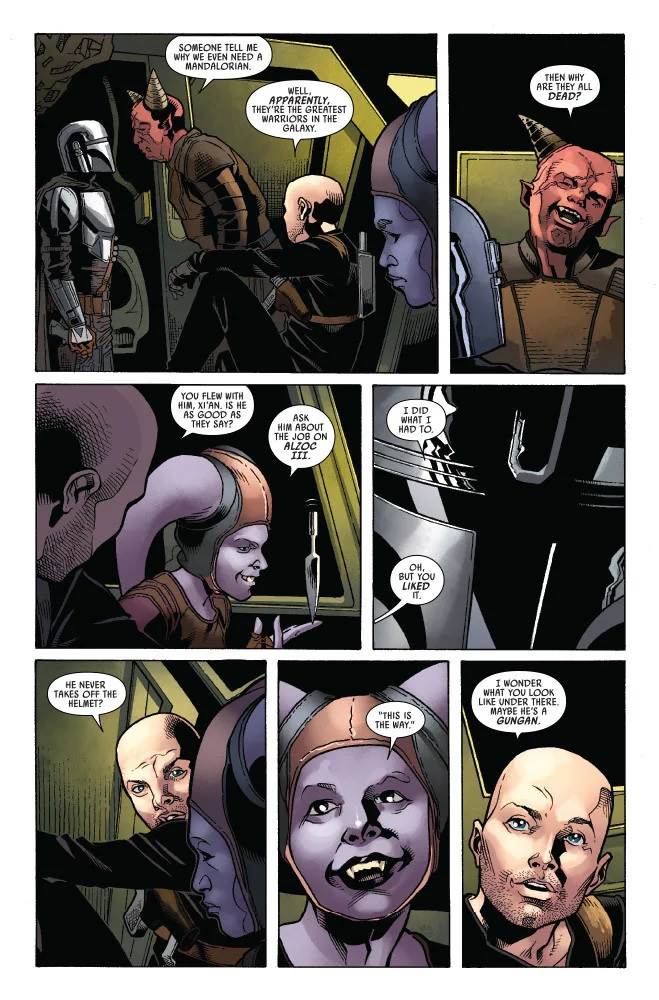 Here’s where things get iffy for me in the comic-book version of the story: on Disney+, the climax of this episode is perfectly edited, with Mando almost acting as a Batman or Xenomorph-from-Alien type threat to the gang of criminals, taking out one at a time as they wander helplessly around the corridors of the ship. But in the comic, that entire sequence comes across as rushed, as though Barnes and Jeanty ran out of space. It’s funny, because I had been wondering what the process was of spacing out the scenes and beats of a series that consists of episodes of varying length when translating it to the comic page. I suppose the answer is that sometimes the comic creators must sacrifice the effectiveness and pace of certain sequences in order to make room for others in the same issue. It’s a shame because, with just a few additional pages I think this would be a near-perfect adaptation, but as it stands there are moments I loved in live-action that just plain fall flat here. But I also understand that, unlike the series’ episodes, each issue must be confined to a certain page count, and compression must be made in some areas along the way. Still, disappointment about those sacrifices aside, I still believe that this team is doing a mostly bang-up job bringing The Mandalorian to another medium, and I’m looking forward to finding out how they pull off season one’s final two episodes. Star Wars: The Mandalorian #6 is available now wherever comic books are sold.