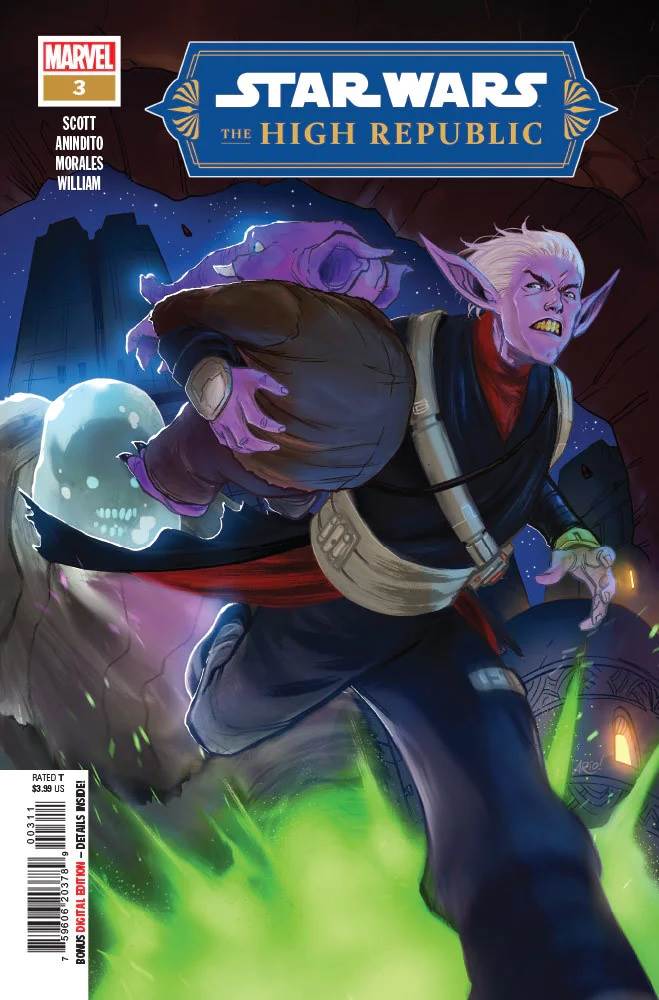 We’re three issues into the second phase of Marvel’s Star Wars: The High Republic comic book by Cavan Scott, and we’re already getting some pretty intriguing backstory on its new characters.

Case in point: the thief we’ve known only as Tey Sirrek, who in issue #3– out today– is revealed to have a much more interesting past than we may have expected. 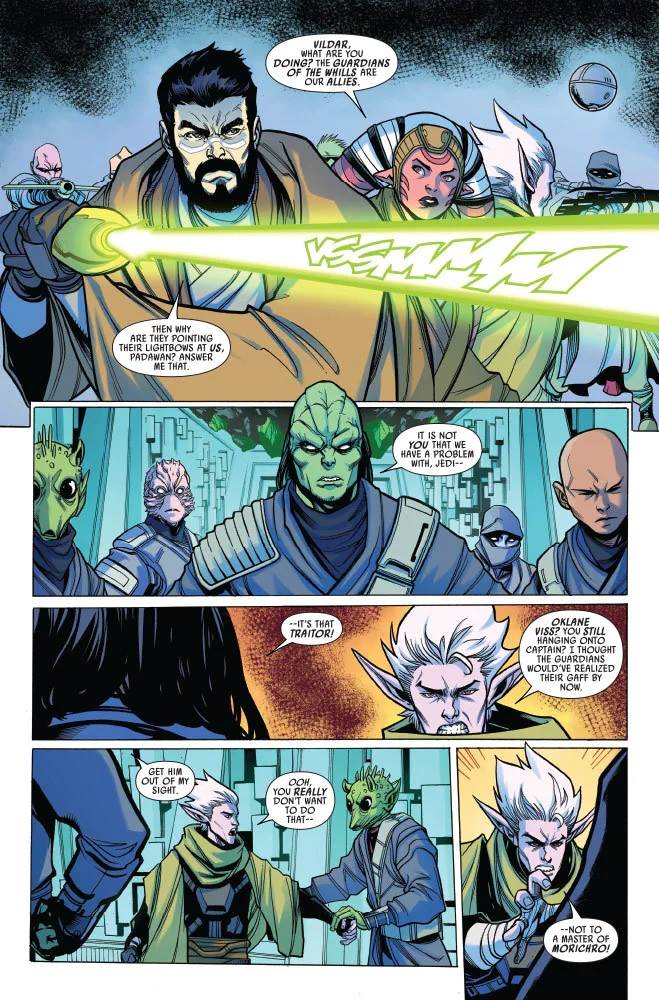 The High Republic #3 begins with Sirrek having entered the Temple of the Kyber in Jedha City with the Jedi Knight Vildar Mac and a Twi’lek Padawan named Metthea “Matty” Cathley. The Guardians of the Whills who guard the temple (first established in 2016’s Rogue One: A Star Wars Story) immediately draw their lightbows when they see the trio approaching, but they quickly explain that it’s Sirrek they have a problem with, not the two Jedi. After being further accosted, Tey flees the temple with his orb-shaped flying droid Skoot and we cut to a flashback set five years earlier, when Sirrek actually counted himself among the ranks of the Guardians. Tey becomes fixated on a street urchin named Flim and his gang leader Anst Wozo, who’s sort of like the Artful Dodger of Jedha City. Sirrek is intent on taking Wozo down, but his superior in the Temple of the Kyber reminds him that the Guardians’ jurisdiction doesn’t extend beyond its grounds. And when Flim turns up dead among other critically injured children in a very dark scene, Tey Sirrek swears off the Guardians of the Whills’ non-interfering ways and goes off on his own to exact vigilante justice on Anst Wozo. Back in the story’s present day, the current Guardians show the Jedi around the temple, assuring them that nothing has been stolen on their watch, though they soon find they are mistaken about that. With an artifact called the Firebird of Colsassa missing from its pedestal, the Guardians are quick to blame Tey, but Vildar believes there are other forces at work. When Sirrek sneaks back into the temple through a window looking for clues, he finds an explosive device and is then discovered by Mac, who in his haste quickly assumes Tey is planting the device, not removing it. He Force-pushes it out the window and there’s a sudden explosion that serves as this issue’s cliffhanger ending, though the teaser synopsis for next month on the final page implies that Vildar Mac may be injured in the incident. It will be very interesting to see how (and if) Tey Sirrek manages to talk his way out of this misunderstanding, especially considering he was on such shaky ground with both the Jedi and the Guardians of the Whills already. As for The High Republic as a comic book, there’s not much more I can say except that Scott and artist Ario Anindito continue to do an excellent job keeping things moving, and I loved learning more about the Guardians. I’ll also say that I’m particularly excited to discover how this title crosses over with the events of the Star Wars: The High Republic – The Battle of Jedha audio drama in the coming months. Star Wars: The High Republic #3 is available now wherever comic books are sold.