Marvel’s Star Wars: The Mandalorian comic book has reached its penultimate issue adapting the smash-hit live-action Disney+ series’ first season, and with it comes a return to Nevarro for Mando and Grogu alongside friends Cara Dune and Kuiil.

Star Wars: The Mandalorian #7, released last week, opens with the title character and “The Child”– as he was officially known at this point in the series– drifting through space, when they receive a hologram message from Bounty Hunter Guild agent Greef Karga. The message implores Mando to return to the planet Nevarro where his adventure began, so that he might help Karga put an end to its current Imperial occupation. But first the Razor Crest makes pit stops on Arvala-7 and Sorgan, where it picks up new passengers Cara Dune (the former Rebel Alliance shock trooper Mando met in issue #4), Kuiil the Ugnaught (see #1 and 2), and even the assassin droid IG-11, which Kuiil has reprogrammed as a service droid– plus a few beast-of-burden Blurrgs for good measure. They arrive on Nevarro and rendezvous with Karga, who has enlisted some guild members to escort the travelers to the city, but not before resting for the evening at the side of a lava river, where they are attacked by reptavians. After a Blurrg and one of the bounty hunters are carried away by the creatures, Greef Karga finds himself mortally wounded in the attack, though Grogu steps forth and heals his wound using the Force. The next day, Karga kills the other two hunters he hired, admitting to Mando and friends that he was walking them into a trap, and that he changed his mind when Grogu healed him. The group accepts his change of heart and alters the plan, posing the Mandalorian as a fake prisoner and sending Kuiil back to the Razor Crest with Grogu. 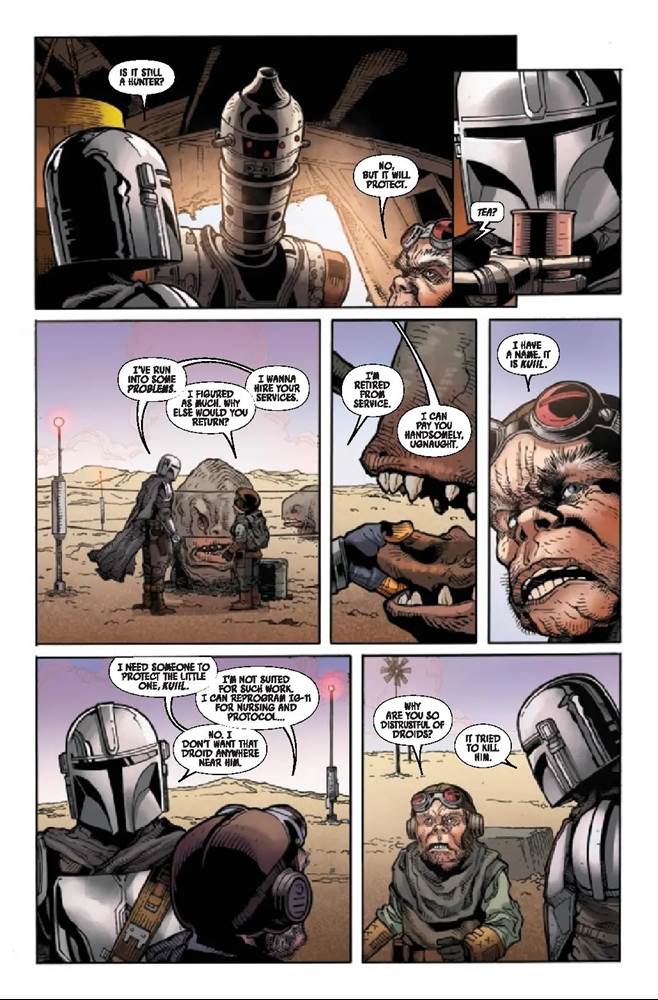 Anyone who’s seen the series knows how this chapter ends: with a standoff in the Nevarro City common house and Moff Gideon outside explaining how much the Child means to him. It was an emotional, hard-hitting episode when it was released on Disney+, and I have to say this particular story also translates quite well to the comic-book page. I think the fact that this installment wasn’t terribly action-heavy actually helps writer Rodney Barnes maintain a steady pace throughout the issue, while Georges Jeanty’s always-reliable artwork delivers the necessary tone and atmosphere. Having seen this episode a good number of times on the small-screen, I was surprised at how much I found myself wrapped up in the story and dialogue here, despite it being translated almost verbatim from the original teleplay written by Jon Favreau, Dave Filoni, Christopher Yost, and Rick Famuyiwa. I’ll go so far as to say that this was my favorite issue of The Mandalorian comic so far, and I’m definitely looking forward to seeing how its creative team wraps up their adaptation of season one in the final chapter “Redemption,” which will be released next month just in time for the long-awaited season three to begin shortly thereafter. Star Wars: The Mandalorian #7 is available now wherever comic books are sold.