Disney Extinct Attractions: The Making of My Symbiosis

Tags: Symbiosis, The Making of Me

Welcome to Disney Extinct Attractions. My name is Cole, and today I’ll be your guide on a journey into the Epcot of old. 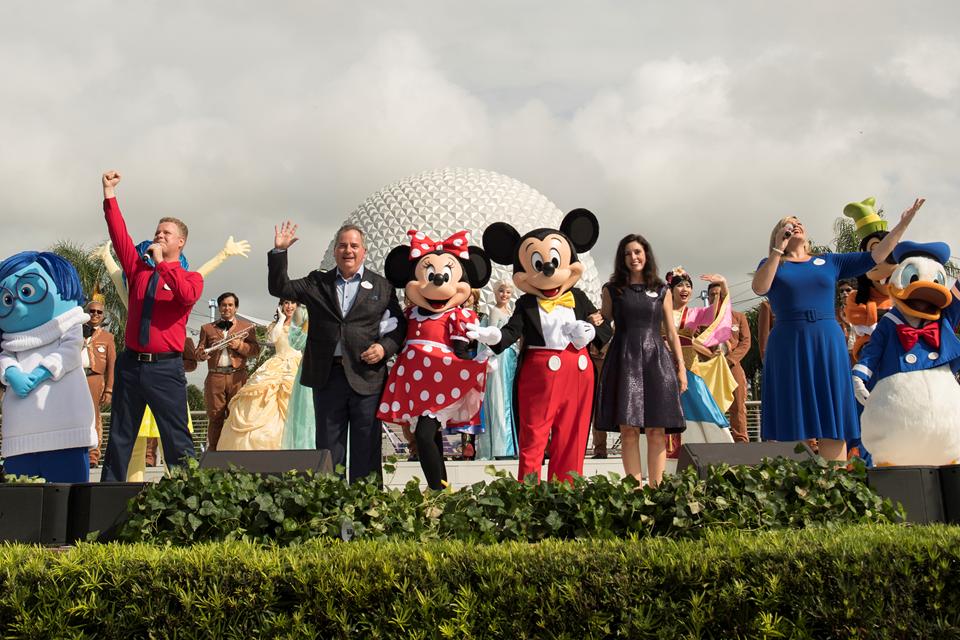 This past Sunday, Epcot celebrated its 35th anniversary, with the merchandise coming out in droves. I’m not going to lie, I almost never purchase merch at the parks, but all of the product that has been released has me really sad that I can’t go down to Epcot and check it out for myself in person. Instead, I’ve got to live vicariously through my friends down there enjoying the 35th anniversary festivities and the Food & Wine Festival.

Even with everything awesome going on there, many still miss the original Epcot that opened on October 1st, 1982. So, to celebrate the anniversary of Epcot, we are going to take a look back at some Epcot attractions of yesteryear to pay our respects to one of the greatest parks of all time. 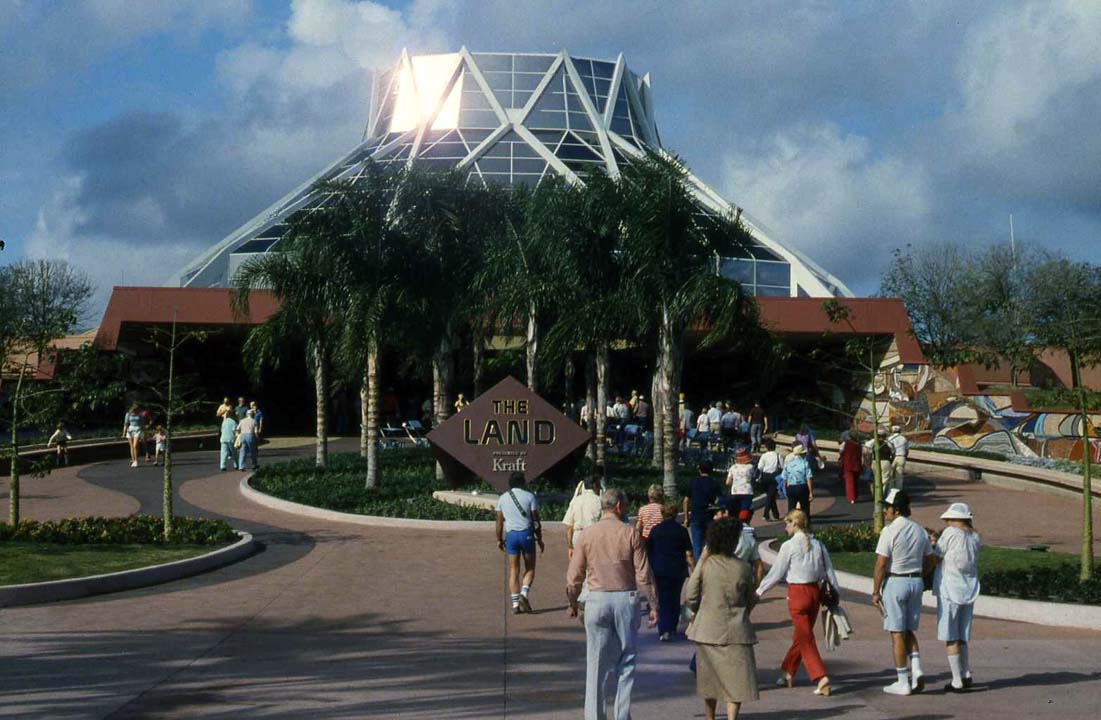 Via Stuff from the Park

When the park opened, one of the pavilions that opened with the park was The Land, focused on the environment and preservation. Within the pavilion there was Listen to the Land, which lives on today as Living with the Land; Kitchen Kabaret, in the place where Soarin’ is today, and finally Symbiosis, one of our featured attractions today.

Symbiosis spread the message of environmentalism to the audience of the Harvest Theater in Epcot. Projected on 70 mm, the film has actually made its way into a few film festivals since its departure from the parks. But before I get too into it, you can check out the video below for a look at it spoiler-free.

The beginning starts much like a nature documentary would. There are beautiful shots of nature and animals, all set to a stunning score. As it continued, the film began to show the effects of what happens when we mess with nature, such as deforestation and lack of food. In this way, Symbiosis made a political statement in a way that few others could because of how many people this film could ultimately reach.

In many ways, Symbiosis reminded me of the True-Life Adventure series of films that Walt helped create. These films focused on animals and the environment and brought the knowledge of them to a mainstream audience. In fact, the series even won eight Oscars, further cementing its place in both critical and commercial minds.

I really feel that Symbiosis is engrained with the spirit of Walt. He was such a champion of these types of attractions in the park that I know he would have loved every second of Symbiosis. It may not be the flashiest attraction, but having that part of Walt in it makes it a pretty great attraction in my opinion. 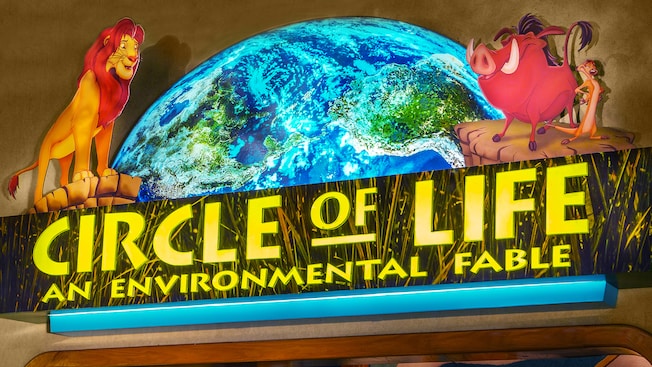 But overall, the attraction was one of the drier attractions in the park, so Symbiosis closed for good on January 1st, 1995, but its life of over 12 years is still longer than many other films that have made their home in the Disney parks. But Symbiosis wasn’t quieted forever as many of the same themes were continued over in its successor, Circle of Life: An Environment Fable. In fact, some of the footage from Symbiosis was even reused in Circle of Life, so Symbiosis still lives on today (though how much longer it will actually stay open remains to be seen).

So now that we’ve seen one of the attractions from Epcot in the 1980s, let’s take a leap back in time to look at one of the most peculiar attractions to ever grace the Disney parks.

Now before I jump into it, this video is one of the ones that I highly suggest that you watch. I’m going to be talking a lot about it, so having some context for what happened in the film would be helpful. Also, just a warning that parental guidance is advised for the rest of this article, as some adult themes will be discussed throughout.

The story begins with Martin Short jumping back in time to see his parents in various states of childhood and up through their wedding day. Martin was hysterical as usual, and I really enjoyed the time traveling aspect that had a very Back to the Future vibe to it. It was all a lot of fun . . . but then things got really weird.

At his parents’ high school dance, each parent started the dance with a date. As happens at dances, the slow dance began, and as each parent was dancing with their date, they both looked up and made eye contact with other. Still slow dancing, they began to move closer and closer until their dates’ backs were against each other, and his parents were staring into each other’s eyes. It was just one of the oddest things I’ve ever seen, Disney park or not. (If you tune to minute 6:30 of the video, you’ll be able to see the scene yourself because I didn’t really do it justice.)

After that scene, things were normal for a little while as we saw Martin’s parents going on their honeymoon and enjoying newlywed activities. But then everything got even weirder when his parents finally decided to have a child, and there was a brief scene of them kissing before panning to the roof where Martin was just sitting. He begins to talk about the sanctity of reproduction and how we humans share the secret to making love. All in the context of his parents procreating. His parents!

It was one of the oddest scenes that I have seen in any film, especially one in a Disney Park. I just can’t believe that this film was actually made and in Epcot for 18 years. It was just one of the most bizarre films I’ve ever seen, especially when it suddenly jumped to animation to discuss more about reproduction and depict the race that sperm cells take to reach the egg. Something like this could never be made in the Disney Parks today, and frankly, it’s amazing that it was even made in 1980s. 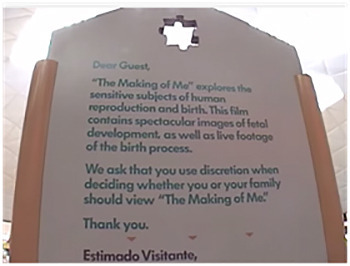 In fact, Disney was so hesitant about the content of the film that they included the above warning sign before guests entered the attraction.

But all of that being said, I thought this attraction was great. It was a really interesting subject, and I like that Disney had the courage to toe the line a bit and try to create something that you wouldn’t normally see at the park. If you’ve read this blog enough, you know that I love the really weird attractions, so of course this attraction fits that bill. It was just so ridiculous that I know I’ll be returning to watch this one time and time again. After over 17 years, The Making of Me closed along with the pavilion on January 1, 2007. The area was so out of the way that it did not attract many visitors who wanted to learn about the human body. Today, the pavilion still stands, playing host to many parts of the Food & Wine Festival, and the theater that showed The Making of Me currently shows the short film, Seasons of the Vine. Also, Martin Short is still in the parks in the short film in Canadian pavilion, so traces of the attraction continue to live on today.

And with that, our look at some Epcot short films comes to a close, so here’s our look at next week’s attractions.

I hope you enjoyed reading all about these attractions today. I’m still not over how crazy The Making of Me was and how it made its way into Epcot. 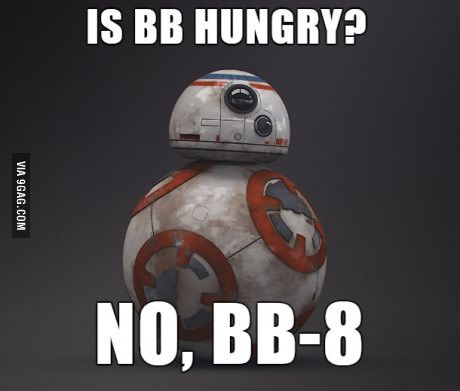 Thank for reading and have a magical day!