Heavy crowds flocked to the Disney Resort today (yesterday for you East Coasters), clogging vehicle traffic and causing long lines, mostly to see things that are either going away permanently, or for a long time. Most of those things are connected to the pending development of a massive addition to the original park themed to Star Wars.

I want to say three things before I get to my main opinions.

1) I’m a fan of the whole Star Wars thing. Not enough to buy collectibles or make my own costume or anything like that, but I’ve always been a fan of the movies. I was a little kid when the first movie hit the screens, and I can remember all the excitement over the second and third movies. I had some action figures and an X-Wing Fighter toy. Once I got over the shift from expecting some sort of coaster-based thrill ride (pretty much based entirely on the vague “coming soon” signs on the construction walls) to accepting the worth of a simulator, I really enjoyed the original Star Tours attraction.

2) I want to see Disneyland change and grow in positive ways, so I like to see major additions made to the original Disney theme park, and I’m thankful that a company that is ever-mindful about pleasing shareholders is willing to make significant capital investments into a 60 year-old venue that is already very crowded.

All that being said, I dislike the placing of SWL in the northwest portion of Disneyland.

Although a good case can, and has, been made lamenting what tangible things will be lost as a result of this placement (Big Thunder Ranch, the backstage Circle D, parts of the Rivers of America and Tom Sawyer Island, and whatever the powers that be decide not to bring back), I have an additional concern: thematic integrity.

The west side of Disneyland takes guests to the past, to places in the old west of America (New Orleans, the frontier) and locales exotic to Americans (Polynesia, Africa, Arabia), albeit idealized mashups of such.

Fantasyland is largely of European inspiration, but again is highly idealized and infused with a fairy-tale magic.

If rumor has it right (and even actual plans change, so it remains to be seen), SWL will be accessible through what is current the Big Thunder Trail, including what was the entrance to the Big Thunder Ranch as well as across from the exit of Big Thunder Mountain, and from Critter Country.

If from Critter Country, guests will be leaving what is (or used to be) a folklore version of the backwoods of the Old South and going into… a landscape from a galaxy far, far away.

If from the Big Thunder Trail, guests will be leaving what is a depiction of the old/wild American west and going into… a landscape from a galaxy far, far away.

How does that work, exactly? 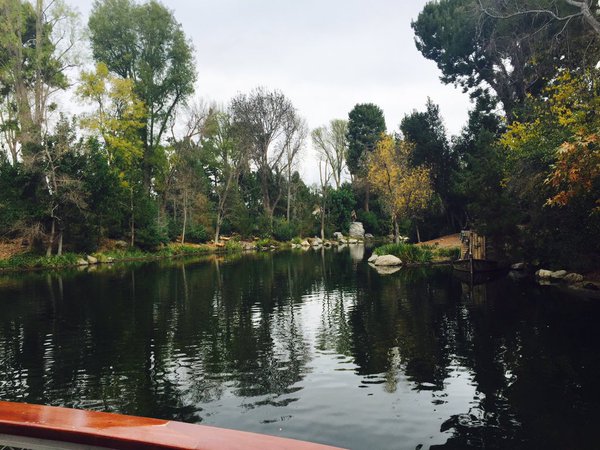 It seems to me that, thematically, if this is going to be part of Disneyland, it should be in, or connected to, Tomorrowland. I know, I know, the movies all start with “A long time ago…” Other than that nod to classic storytelling by George Lucas, is there any indication in the Star Wars canon that these things are actually in the past? I’m only familiar with the movies, not the books or animated television series, and the movies, absent any other part of the canon, would all be considered futurism if not for the flash of text before the opening crawl. Really, a lot of people do consider them futurism on some level, even though it is fantasy.

Disneyland’s Tomorrowland has been a thematic struggle pretty much ever since the 1967 version faded out, and it could be helped with a cohesive major overhaul/addition. This is why SWL should go there.

Where, exactly, do you ask? Where is the 14 acres that is needed? 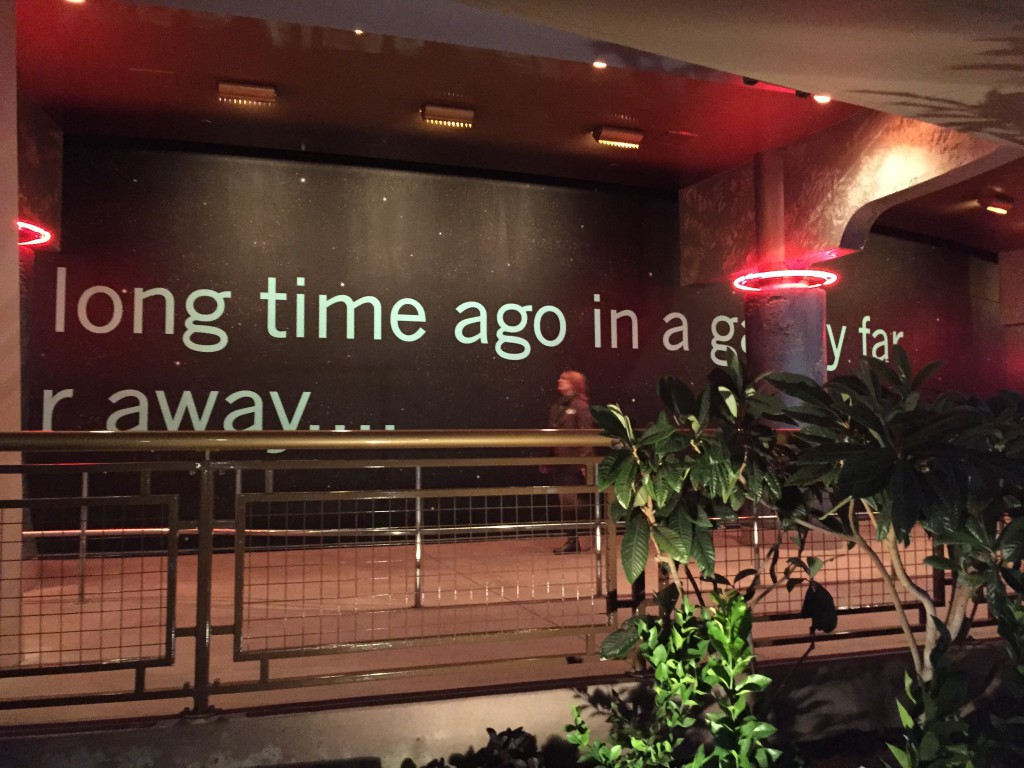 Well, I ask “What about the southern part of Tomorrowland, and beyond?” The former Innoventions/Carousel Theater building (currently Marvel Superhero HQ on the second level and Star Wars Launch Bay on the lower), the Magic Eye Theater, and the former Starcade, and the towering structure that used to be the Rocket Rods/Peoplemover loading areas and Rocket Jets are all places that are ripe for major change. So what I propose is that from Star Tours to Star Wars Launch Bay, everything, with perhaps the exception of Space Mountain, be overhauled into SWL.

But that’s not enough land, you say? Well then, how about pulling a Universal Orlando and putting part of SWL in the under-developed Hollywood section of California Adventure? Then, it can be linked to the Tomorrowland portion with a themed form of transit, or a full-blown development between the parks could be made, with a Star Wars-themed hotel fronting Harbor Boulevard.

Yes, some critical backstage amenities would need to be moved or changed and the shuttle area would have to be moved across Harbor Boulevard to land Disney now owns, with a link across Harbor. But it would be a bold, exciting move that would encourage the purchase of parkhopper tickets.

I know there are many people who think SWL in its entirety should go into California Adventure or get its own park or be part of a third park. I’m not sure how the whole thing would fit into DCA. I suppose it is possible, but then Star Tours is still over there in Tomorrowland (as it will be after SWL is built, unless it is moved). A third theme park could be great, but it’s clear Disney wants to capitalize on the renewed enthusiasm for Star Wars, and building a third park, especially due to government-mandated processes before ground can be broken, would take at least a few additional years than adding on to the existing theme parks will take.

Back to the northwest of Disneyland. I would like to see that area developed. It’s not like I just think it should be left alone. However, I think there are many more thematically appropriate concepts that could go there, including things for for which Disney does have intellectual property that would fit nicely.

I get logistics can be more favorable to quickly adding SWL to the northern Rivers area, but thematic integrity and flow are an important part of the formula that has made Disneyland work so well. Unless it will be completely obscured from the Rivers and the accessing the land will be an experience in itself that is a satisfactory transition out of the frontier, it’s going to be be somewhat of a disruption the flow of themes. But then, Disney parks, including Disneyland, have been dealing with that issue for a while. It always seemed to me that Fantasmic should have either been moved to become an addition to Fantasyland or should have an opening that fits with the theme of the area. (I wish they’d take this opportunity to do just that, with an upgrading of the show.) Plenty of eyebrows raised when a “permanent” Winnie the Pooh attraction was added to Critter Country, which had, until then, been themed to a fantasy version of the backwoods of the South, an extension of New Orleans Square. There are other examples Disney park enthusiasts can rattle off. I’m not one to grumble about the construction itself, and attractions being closed for a time because of the construction. Construction is usually difficult. Long closures are not unprecedented for the Rivers of America or the Disneyland Railroad, but the course of the Rivers have been essentially the same since Walt Disney himself set it down in the plans. I’m sure most mourning this loss/change would be fine with an extension of the Rivers, but rumors of significant shortening of the Rivers is upsetting many. The Railroad has had to deal with growth and change throughout the history of the park. I remember when the Disneyland Railroad was closed as Splash Mountain was built and Bear Country was transformed into Critter Country.

Speaking of Critter County, there is no reason I know of much of what we’re losing from the closure of Big Thunder Ranch couldn’t be recreated in an expansion/remaking of Critter Country, provided the rumored access from there into SWL won’t preclude that. Or, perhaps, a ranch could be built at California Adventure? Since there isn’t a similar experience elsewhere at the Resort, it would be quite the loss to have it disappear permanently. How many people would object if the Hungry Bear Restaurant became the new BBQ place? The general audience of Disneyland has lost too many “smaller” experiences in recent times. The Court of Angels was taken up by Club 33. The Disney Gallery over Pirates of the Caribbean was “moved” to Main Street so that the Dream Suite could take the space. We lost Fort Wilderness on Tom Sawyer Island. The Keel Boats have been gone for almost 20 years now. And now the Big Thunder Ranch will be gone, along with certain scenes and scenery along the Rivers.

Something the Resort management is doing right about this thing is having limited-time experiences with some of the closed attractions. From what I’ve read, it sounds like guests will definitely be able to examine the Disneyland Railroad trains and talk with cast members experienced in operating the railroad, and Jungle Cruise skippers will still be entertaining guests. I also hear something similar might be done with the Mark Twain.

So let me sum up:
Yay for Star Wars Land!
It would be even better if placed somewhere more appropriate.
Yay for limited-time experiences at some closed attractions.
Please bring back the canoes and whatever else you can.
Can we please get the Ranch back in another location?

What do you think?

For another take on the Rivers of America controversy, be sure to read FanBoy’s take. Also, new information has been released about what the Rivers will look like after the construction period.