Final Episode of “Big Hero 6 The Series” Starts Off Krei-zy, But Ends Poignantly

Though originally set to be the season finale of Big Hero 6 The Series, it was announced a few weeks ago that today’s episode would be the final episode for the animated television series. Though the first half is a traditional mad-cap adventure for the show featuring karaoke tunes and some Krei nonsense, the second half is a little more poignant, with some twists and turns and a more proper note to end the series on. 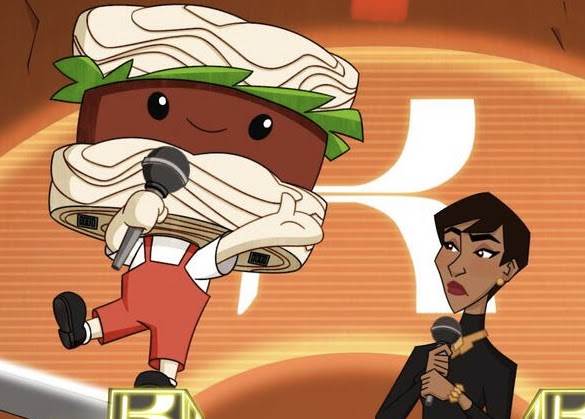 Super weapon?? Krei is showing Big Hero 6 a new prototype that is technically a sonic cannon, but that isn’t why they’re there. Though, the heroes know trouble is ahead with that prototype fearing it could fall into the wrong hands. The wrong hands happen to know exactly about that cannon, as Noodleburger Boy and the mascot bots are hacking into Krei’s network, thanks to abilities left over inside the programming of Noodleburger Boy, who then performs a song about how they are going to steal the sonic cannon.

We find out that the real reason that Krei has invited Big Hero 6 over is to show off a new Karaoke machine for the next evolution (that he is betting the farm (Krei Acres) on) of the music fun, Krei-oke. Mistaking the gang for “teen influencers,” he asks that they perform to get people to attend Krei-oke Night, and inevitably purchase a Krei-oke machine.

Though similar in nature to a recent episode of Big City Greens, the songs the characters sing (including appearances from Aunt Cass, Felony Carl, Globby, and Professor Granville) aren’t nearly as catchy, or dare I say, fun. However, the songs all reflect what is happening with Noodleburger Boy and the bots as they try to break into Krei’s facility and steal the sonic cannon. While Granville is singing her number, the bots get in and get their hands on the cannon, but it’s revealed that Hiro needs an amp to stop them, and where would he find that? Why, the Krei-oke machine of course! Noodleburger Boy has discovered the Krei-oke machine as well, and jumps into Granville’s (surprisingly amazing) performance, driving the amp to the power it needs to overwhelm the sonic cannon, resulting in the near destruction of Krei’s building, much to his chagrin, demanding that someone explain why they never told him that could be used as a weapon. Honey Lemon suggests that the Krei-oke was a hit, but turns out, Krei only sold one machine after all that. Who bought it? Noodleburger Boy, who we see singing his Noodleburger Boy Blues as the first half of the final episode closes.

The second half of this episode is truly where the last episode of the series shines, and though originally listed as the first half, is likely why the powers that be switched things around.

We first find Noodleburger Boy and his bot family attempting to steal the giant Noodleburger Boy statue, when Big Hero 6 arrives on scene to stop him. The bots get away but it's revealed that the real point was to allow Gogo to put a tracking device on Crushroom so they can keep an eye on whatever the bots are up to.

In doing so, the heroes find out that the bots are holding auditions for a new member for their bot family. Although Fred wants to try out, Baymax and Mini-Max are considered instead since they are, you know, actual bots and not a human.

Mini Max auditions and tells them the bots that he is now villainous and wants to betray the Big Hero 6 gang. After some convincing, the bots welcome him with open arms and invite him to be part of their family, giving him mugs and framed photos (the frame costs extra, you know!). Despite being a part of Big Hero 6, Mini-Max feels like he is now part of their family, and starts feeling guilt about the plan to ultimately betray them.

The bots are all at the Noodleburger Boy headquarters scheming to deep fry Big Hero 6 when the heroes show up as part of their plan they made in advance thanks to the tracker and Mini-Max. But Twist! Thanks to the obvious location in which GoGo placed the tracker, the bots knew what was going on the whole time, mocking Mini-Max in the process, and disappointing him as they explain they never considered him a part of their family, and call their back up in, and Momakase (who we last saw in “Big Hero Battle”) comes crashing through the roof, slicing off the various gloves (and tail in the case of Fred) of the heroes of Big Hero 6.

But another twist! Making this the rare Triple Double Cross that Fred never thought he’d ever see, Momakase was working with Hiro, and together the humans round up and take out the chips of the mascot bots. Mini-Max, feeling bad, asks what will become of the bots, and we then see them reprogrammed and now working for Aunt Cass at the Lucky Cat Cafe, as hosts and servers. The episode ends with a view of the San Fransokyo Bridge, a fitting ending for the series.

This episode is available on DisneyXD, as well as streaming on the DisneyNOW App. 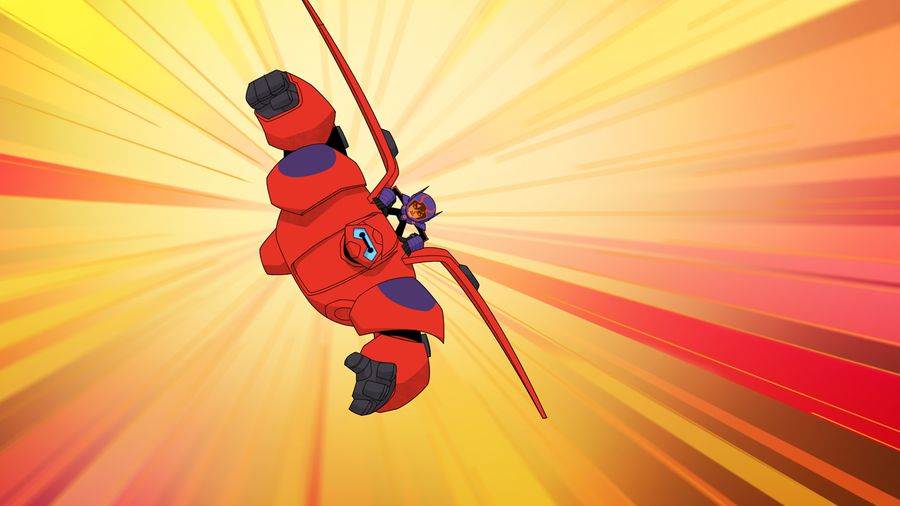