We’re embarking on one of the first cruises aboard the Disney Cruise Line today, sailing away on the beautiful Disney Dream, and we’re sharing some of the differences guests will notice almost immediately when they set out to discover uncharted magic. 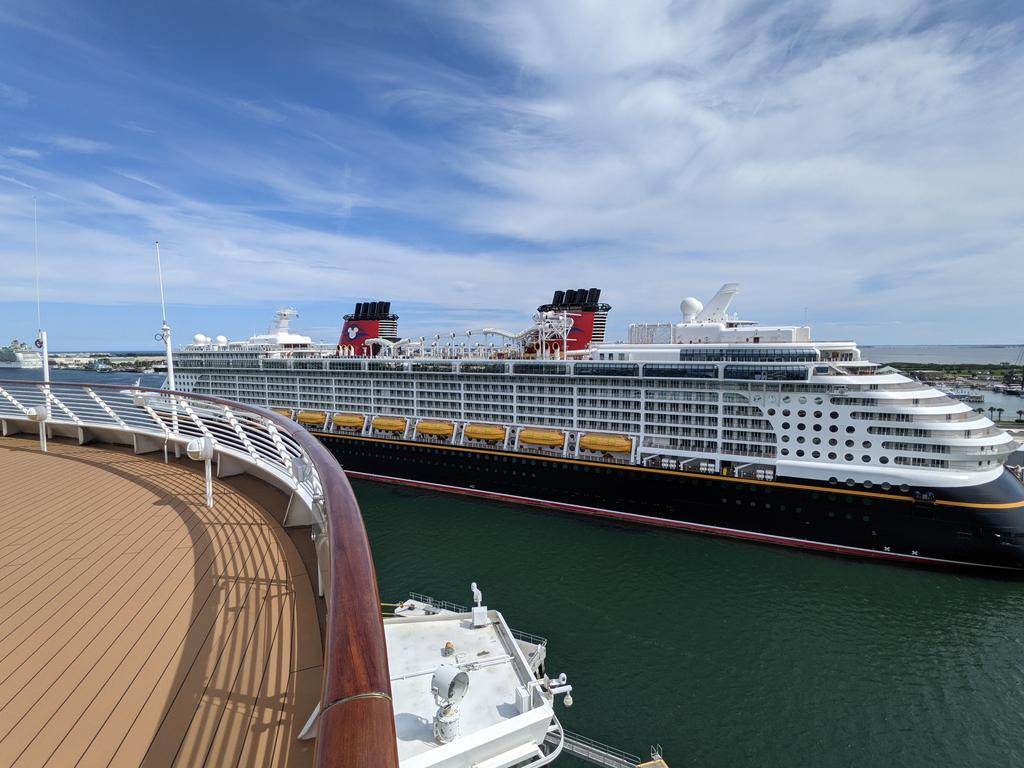 When arriving at the Disney Cruise Line terminal to board the Disney Dream, we noticed (it’s hard not to!) sister ship, the Disney Fantasy in port as well. Guests are now given a specific time in which to arrive at the port. This time is enforced.

After unloading luggage at the curb, instead of heading into the terminal, guests are now directed to health screening locations. Guest records are then searched to see if you’re vaccinated or if you need to be tested. Guests whose records indicate that they are fully vaccinated will not be subject to testing. However, if testing is required, guests are given a kit and directed to another location where you are walked through the process.  (Note: If you arrive in your own vehicle, you'll be directed to the parking structure after dropping off your luggage where you'll take the test and await the results in your car).

The test is self-administered and guests are moved to another tent (complete with television showing Mickey Mouse shorts) with another screen showing test results by reservation number. The process ranges from 30-45 minutes. Once cleared, guests can move to the boarding terminal. From there, the process is relatively the same with a security check, and the presentation of travel documents (passport, etc.). Most of these documents and identification photos are now uploaded through the Disney Cruise Line App but should there be any issue with any of the uploads, they can be resolved at the desk in the terminal. 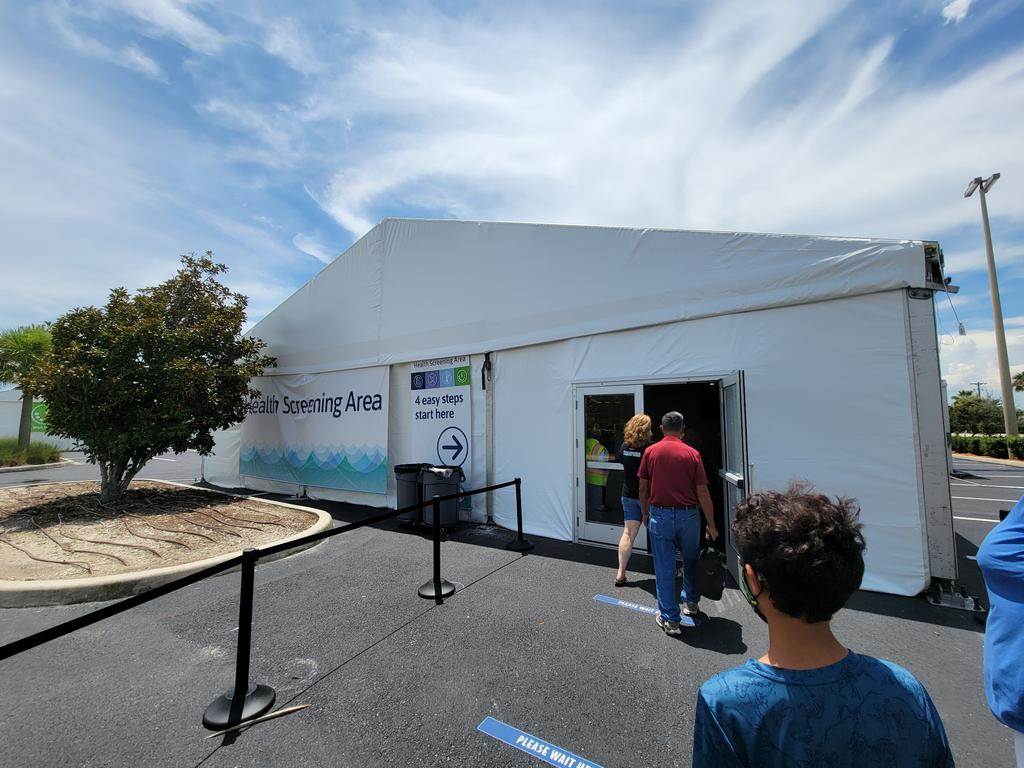 Guests are given a boarding time, promising a time in which they are welcomed aboard. Previously, this would be done en masse and groups would file onto the ship. While the more traditional welcome line is gone, there are still a number of Crew Members welcoming families aboard, and are then grouped into socially distanced circles for a brief welcome performance featuring Captain Mickey and Minnie Mouse. Based on the events listed in the schedule (or “Navigator”) this brief performance is in lieu of a Sailing Away party. 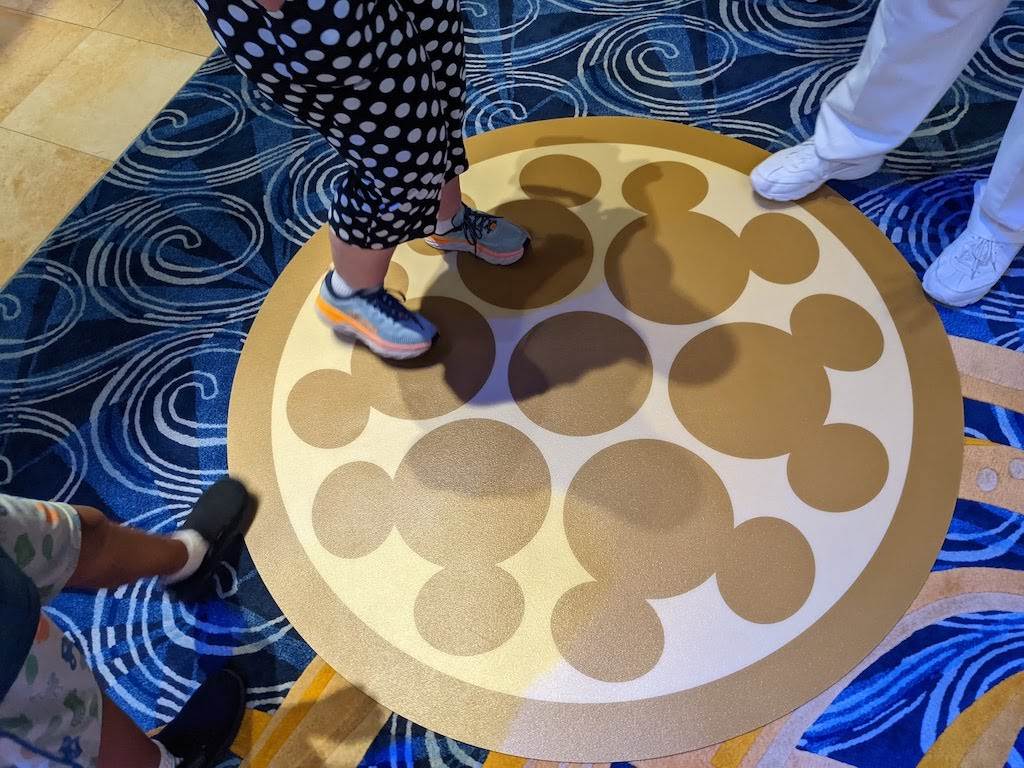 Anyone who has ever been on a Disney Cruise or just cruise in general knows that each departure is preceded by a Muster Drill. These legally required drills, simulating the evacuation procedure in the rare event the captain orders an Abandon Ship, are again, usually done as a giant group of thousands at a time. Now, they are done by individual staterooms, with guests heading to their designated location with a card, and finding their appropriate Crew Member who will scan their card to prove that they have been there and know where their muster location is in the event of an emergency. Throughout the ship, new policies and procedures are in place, with the one that truly captured our attention located at the fitness center in the Senses Spa and Salon. While the gym is open to all guests aboard the ship, there are designated times throughout the journey that it is only open to Fully Vaccinated Guests. The locker room at the spa is also currently restrooms only, with no access to the showers. There are distancing markers in the gym as well, but a big change was noticed by fans of the Rainforest Room. Now, there are booking windows for you and up to ten in your party, coming in at $174 to book for 1 hour and 45 minutes at a time. No areas in terms of food or drink (save for water fountains) are self-serve anymore. Now, drink stations in Cabanas (the ship’s buffet) are staffed by a Crew Member and food stations throughout are now dished and served by someone tending to the station. Drink stations near the pools are also staffed by a Crew Member. What might be bad news for some is that this also applies to that delicious soft serve. Once self-serve itself, it too is now manned by a crew member dishing out portions that won’t defy gravity nearly as much as some passengers might have tempted to previously. But that doesn’t mean you can’t go back for seconds! 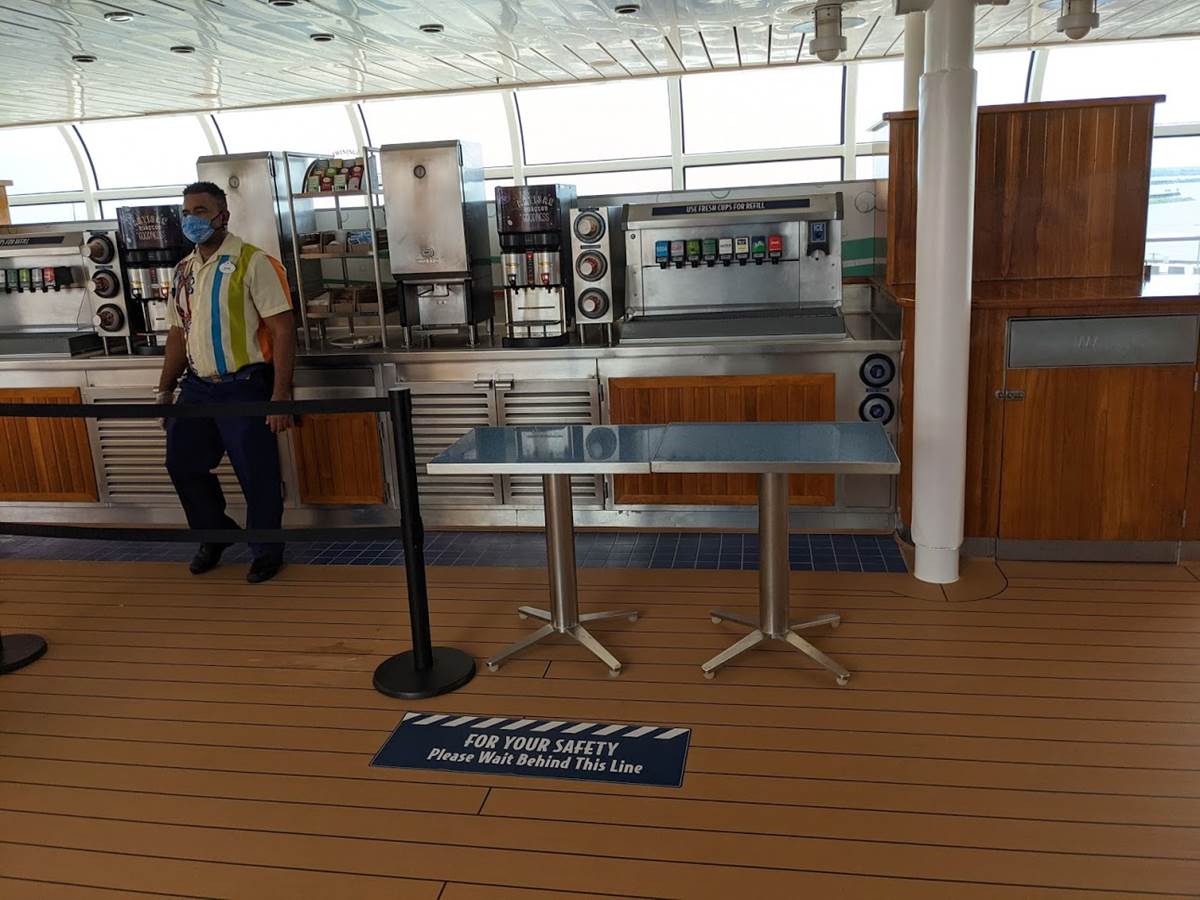 Much of what is happening on the ship is similar to what we saw when the parks and resorts of Walt Disney World first reopened last summer, with social distancing markers placed throughout so that guests keep their distance. These were found in the common areas, in pools and tables, with some tables even closed so that guests would not be that close to each other. The pool decks, once a long alley of sun chairs, are also spread out to allow for distancing. Menus for the bars and restaurants are found on the Disney Cruise Line app by scanning QR codes, and some areas, like the Disney Vacation Club booths, concierge services, and guest relations are all equipped with plastic shields due to their high levels of face-to-face contact. It should also be noted that use of the Disney Cruise Line App on the ship’s WiFi is complimentary. Other internet and WiFi use still retains an additional charge. One little thing we were a big fan of though, are these water bottle refill stations we found on Deck Four. As for the kid’s activities, while we weren’t able to partake in a usual open house like has been done in the past prior to the Muster Drill and the ship setting sail, we were able to find out that reservations for the Oceaneer’s Club and the Oceaneer’s Lab are set up in 90 minute blocks and you can go back as long as they are available. No food is served and no food is allowed into these areas. 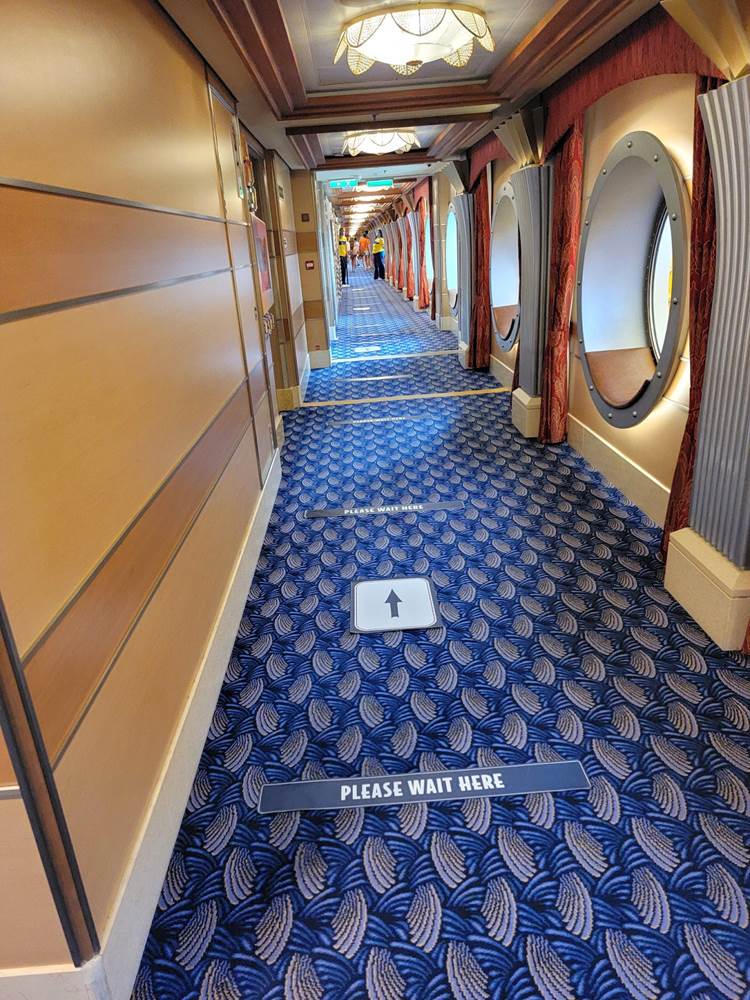 Also, while the Buena Vista Theater is showing first run movies like Jungle Cruise and Black Widow, concessions are not available in the theaters, and only water is available.

The most notable change however, is the reduced capacity of the ship. For the embarkation day of an allegedly sold out cruise, the crowd is surprisingly light throughout the ship.