Pandora – The World of Avatar – A Guide

Pandora – the World of Avatar is an exciting new expansion coming to Disney’s Animal Kingdom in Walt Disney World. Based on the hit James Cameron film Avatar, Pandora invites guests into a lush and mystical terrain, which promises a number of surprises. The new land is set to officially open May 27th, 2017. Guests to Disney’s Animal Kingdom cross the park’s Discovery River into Pandora – The World of Avatar and continue along a winding rainforest path for their first glimpse of the land’s iconic floating mountains. Pandora – The World of Avatar at Disney’s Animal Kingdom

The new land welcomes guests to the lush world of Pandora long after the human conflict with the native Na’vi inhabitants has ended. The dramatic daytime beauty of the land transforms to glow by night when bioluminescent flora and intricate nighttime experiences add a dreamlike quality to Pandora.

Below is a complete guide the land’s attractions, dining, and more:

The Valley of Mo’ara is where your discovery and exploration of Pandora begins. It’s where the land is an adventure unto itself. Where you don’t climb over mountains—you hike under them. It’s where the night sky comes alive with a bioluminescent glow. It’s where you’ll experience the start of a jaw-dropping, “I’ll-be-talking-about-it-for-years” type of adventure.

Climb aboard a reed boat and soon you’ll see that on the sacred Kaspavan River, every moment tells a story, and every bend sings a song. This expedition into the rainforest deep within the Valley of Mo’ara will take you right into the middle of Pandora and Na’vi culture. Traveling into the darkest part of the forest, you’ll find yourself surrounded by a canopy of exotic glowing plants and amazing animals on the move. The eight-seat reed boats float past exotic glowing plants and Pandoran creatures into the midst of a musical Na’vi ceremony. Listen closely and you’ll hear the Na’vi Shaman of Songs as she fills the forest with beautiful music about the sacred bond between nature and ourselves.

Avatar Flight of Passage launches each guest on an exhilarating, wind-in-your-face experience on a winged mountain banshee over the awe-inspiring world of Pandora. Guests will actually feel the banshee breathe beneath them as they soar through the forest and past floating mountains. What was a rite of passage for Na’vi in Cameron’s film becomes a multisensory experience for guests seeking the ultimate adventure – a faceoff with the most feared predator of Pandora, the Great Leonopteryx. 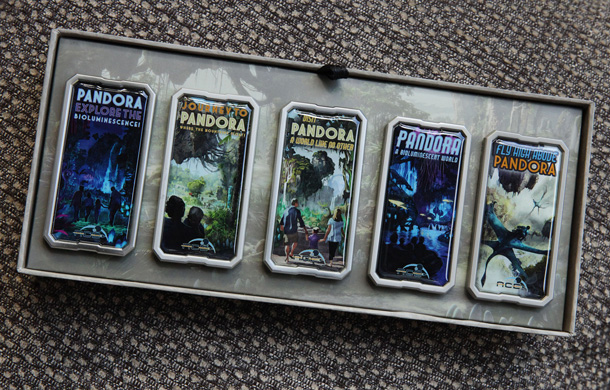 Indulge in the art and culture of the Na’vi while dining inside this former RDA mess hall, only at Pandora – The World of Avatar. Owned and operated by Alpha Centauri Expeditions (ACE), Satu’li Canteen supplies travelers all the comforts of home—courtesy of a unique, fast-casual menu that’s been crafted from Pandora’s natural abundance.

Featuring international-inspired cuisine, vegetarian options and specialty libations, it’s the perfect place to refuel as you venture through the Valley of Mo’ara.

Satu’li Canteen will also offer specialty drink, such as the the Pandoran Sunrise — a non-alcoholic mix of tropical juices blended with Powerade Melon, also available in a souvenir Satu’li Canteen Flute Flask. 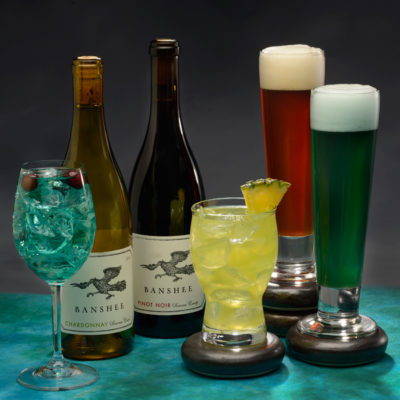 In terms of alcohol, the restaurant will serve wine (Chardonnay and Pinot Noir) by the glass from a Napa Valley winery named Banshee. Additionally, there’s the Dreamwalker Sangria with a splash of Blue Curaçao. Also on the menu are two craft beers: Hawkes’ Grog Ale (with notes apricot, peach, and wheat) and Mo’ara High Country Ale, a malty amber ale with the aroma of herbal spice hops and tastes of caramel, toffee, and nuts.

Wet your whistle at this popular drink stand run by an expat who fell in love with Pandora – The World of Avatar… and never left.

Quench your thirst the Pandoran way at an otherworldly pit-stop offering Na’vi-inspired refreshment.

Are your expeditions at Avatar Flight of Passage and Na’vi River Journey leaving you parched? Hike to the corner of Windtraders where you’ll find Pongu Pongu—when you spot a friendly expat serving out-of-this-world drinks, you’ve come to the right place.

Meaning “Party Party” in the language of the Na’vi, Pongu Pongu welcomes weary travelers to try our bioluminescent frozen cocktail, indigenous beers—or even a sweet snack you won’t find elsewhere!

One of the first specialty beverages is The Night Blossom — a non-alcoholic frozen drink that mixes limeade with apple and desert pear flavors topped with passion fruit boba balls, available in a souvenir mug. 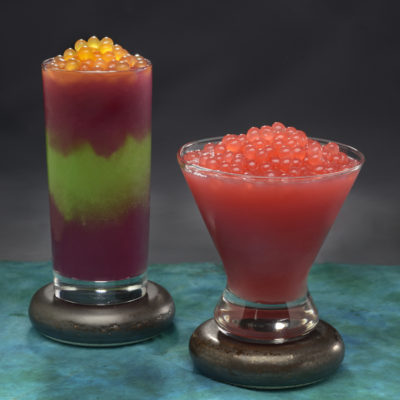 There’s also the Mo’ara Frozen Margarita made with Sauza Conmemorativo Añejo Tequila, strawberry and blood orange flavoring, and strawberry boba balls. Once again, this is available in a specialty mug.

Both beer options — Hawkes’ Grog Ale and the Mo’ara High Country Ale — are also on tap here and can be purchased in a souvenir mug.

The hosts of ABC’s The Chew recently got to try one of the dishes on the menu at Pongu Pongu: Lumpia. Take a look:

We’re ready for sweet treats from #VisitPandora! Get a sneak peek @WaltDisneyWorld's @visitpandora and see even more tonight on @Nightline! pic.twitter.com/DltwE9WBpH