Feliz Navidad! The holiday season is already well underway at Southern California’s Disneyland Resort, and that means the return of the ¡Viva Navidad! themed area to Paradise Gardens at Disney California Adventure, where guests can “revel in authentic holiday music, dance, décor and a dash of Disney magic,” all in an effort to celebrate Christmas in the same festive way as our friends south of the border.

“Celebrate with The Three Caballeros, giant mojiganga puppets, musicians and more. ‘Wing’ in the holidays—join Donald Duck and his amigos at the ultimate family fiesta.

Alongside Mexico’s Panchito and José Carioca from Brazil, Donald heads up a holly, jolly, joyous celebration through the streets! Get ready to kick up your heels at an exuberant bash featuring mariachi and samba musicians, folklórico dancers, some of your favorite Disney Characters and incredible 12-foot-tall mojiganga puppets of Santa and Mrs. Claus!”

And here’s what Disney has to say about “Princess Elena of Avalor’s Grand Arrival”:

“Say bienvenidos to Disney princess Elena of Avalor during a music-filled cavalcade. Hear the fanfare and prepare to wave as Princess Elena arrives on her magical float!

Escorted by colorful companions, Elena will greet well-wishers with stories and songs from her native land. Replete with pomp, circumstance and a dash of enchantment, this traveling fiesta winds around Paradise Bay several times each day.

Come one, come all—celebrate Princess Elena of Avalor and discover more about her magical realm. It’s an imperial sighting you won’t want to miss!” 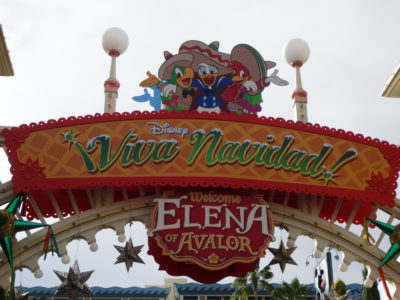 ¡Viva Navidad! runs alongside Festival of Holidays from now through Tuesday, January 8 at Disney California Adventure in Anaheim, California. For more information, be sure to visit the park’s official website.