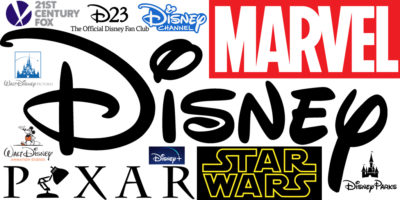 This week we said goodbye to 2018 and hello to a brand new year, one that could potentially be the biggest in The Walt Disney Company‘s history. Between the Fox acquisition, the launch of the highly anticipated Disney+ streaming service, and some very big things coming from Disney Parks, Marvel Studios, Lucasfilm, and Pixar (not to mention Disney’s own live-action and animation departments), once the ball gets rolling on 2019, it won’t stop for quite a while.

With that in mind, the Laughing Place staff has compiled a list, in increasing order of our personal enthusiasm, of the nineteen biggest events, movies, and theme park attractions coming from Disney over the next 52 weeks. We’ve also assembled a fun and exciting video below which showcases the same assortment of what are sure to be among any Disney fan’s top moments of 2019. Enjoy!

The popular action/comedy series from 2002-2007 is being revived in a big way: with live-action. Newcomer Sadie Stanley is taking on the role of the high school student turned crimefighter, with the directing duo Zachary Lipovsky and Adam B. Stein (Mech X-4) tasked with bringing the hit show to life with costars Alyson Hannigan (Buffy the Vampire Slayer), Sean Giambrone (The Goldbergs), and Patton Oswalt (Ratatouille) along for the adventure. 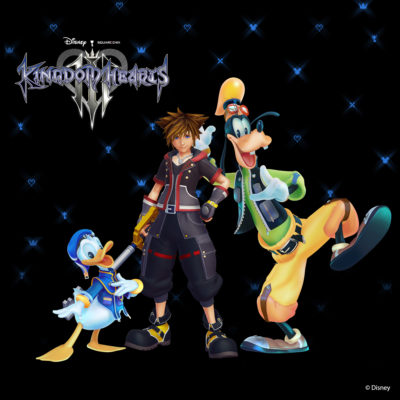 Kingdom Hearts III will be released worldwide for PlayStation 4 and XBOX One on Tuesday, January 29.

One of several remakes of classic Disney animated features headed to theaters this year, Aladdin stars Mena Massoud (Tom Clancy’s Jack Ryan) as the title character, alongside Naomi Scott (Power Rangers) as Jasmine, Marwan Kenzari (Ben-Hur) as Jafar, and Men in Black megastar Will Smith as Genie. Can director Guy Ritchie (Sherlock Holmes) deliver an adventure on par with the original, and can the Fresh Prince come close to capturing the magic that made Robin Williams’ performance so memorable? We’ll find out this summer. 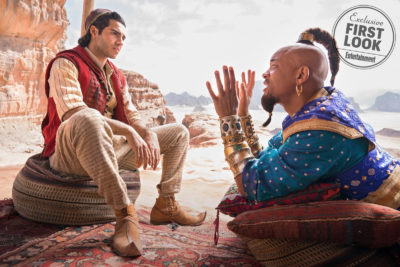 Aladdin opens in theaters nationwide on Friday, May 24th.

Back in 1989, Walt Disney World beat Universal Studios Florida to the punch by opening Disney-MGM Studios, dedicated to celebrating the Golden Age of Hollywood, a full year ahead of its chief Central Florida theme-park competitor. Under its current name since 2008, today the park is undergoing a major overhaul, with new areas like Toy Story Land and the upcoming Star Wars: Galaxy’s Edge drawing guests from around the world. This spring we’ll celebrate the end of this wonderful park’s first three decades, and look forward to all the fun the future will bring at Walt Disney World’s third gate. 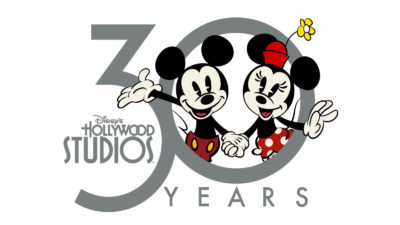 Celebrate the 30th Anniversary of Disney’s Hollywood Studios on Wednesday, May 1st. 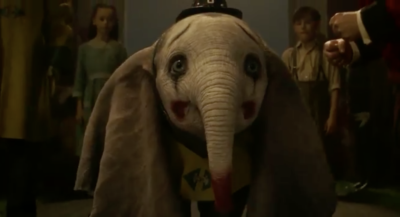 The biggest fan gathering in the galaxy returns after a year’s hiatus with a tremendous five-day event in the Windy Cindy. Star Wars enthusiasts can expect countless celebrity appearances, big reveals about Episode IX and the several upcoming TV series, and probably one final update about Galaxy’s Edge before it opens to Disney Parks guests. 2018 was a rough year for the state of the Star Wars fan community, so it will be nice to have some positive vibes coming from Lucasfilm and its supporters as we approach some huge milestones for the iconic space opera franchise. 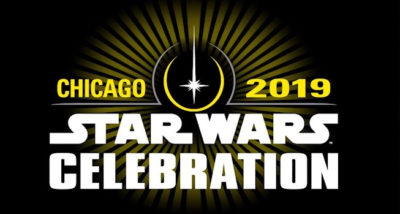 Anna (Kristen Bell), Queen Elsa (Idina Menzel), iceman Kristoff (Jonathan Groff), and that lovable snowman Olaf (Josh Gad) are back for a sequel to the highest-grossing animated film of all time. Very few details have been released about the movie’s plot, but rest assured our Frozen friends will find time for weather-related adventures, catchy musical numbers, and further celebrations of sisterhood in the fantasy world of Arendelle. 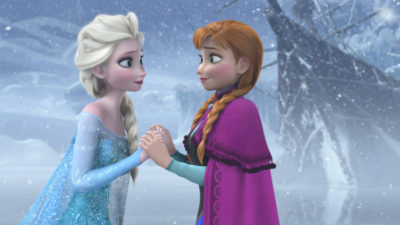 Director Jon Favreau (Iron Man) took some big technological leaps forward with his 2016 reimagining of Disney’s The Jungle Book, and now he’s continuing that trend with a remake of 1994’s most popular animated movie, just in time for its 25th anniversary. Simba (Donald Glover of Solo: A Star Wars Story), Nala (superstar musician Beyoncé), and Scar (Chiwetel Ejiofor of Doctor Strange) will look more lifelike than ever in this feature film event that defies categorization. 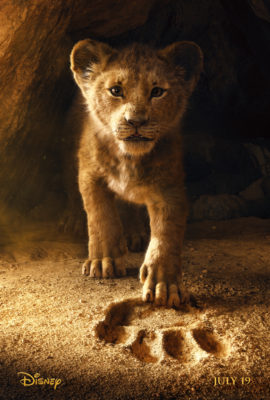 The Lion King roars into theaters on Friday, July 19th.

Gone are the days of Disneyland’s Skyway, the gondola ride which traversed Fantasyland and Tomorrowland and was later replicated at Walt Disney World’s Magic Kingdom and Tokyo Disneyland in Japan. But Walt Disney World guests can now look forward to enjoying a smooth ride in sky thanks to the new Disney Skyliner lift system, which will connect the Disney’s Hollywood Studios and Epcot theme parks, plus four resort hotels. Guests have already noticed the many towers and cables being stretched around Walt Disney World, and we can’t wait to finally get aboard. 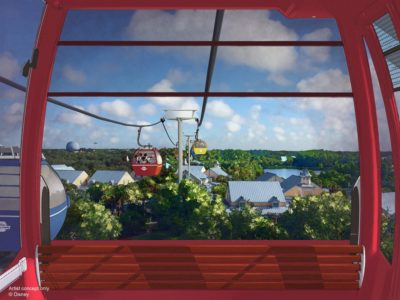 The Disney Skyliner is expected to open this fall at Walt Disney World.

The Marvel Universe is gradually making its way into Disney Parks, and the next big step in that process is the opening of the Ant-Man ride at Hong Kong Disneyland. A competitive shooter experience like Buzz Lightyear Astro Blasters, Nano Battle! has guests joining forces with Scott Lang and Hope Van Dyne in a fight against Arnim Zola and his army of Hydra swarm-bots in a state-of-the-art S.H.I.E.L.D. vehicle during a trip to Stark Expo. If any of that makes sense to you, you probably fall squarely within the target demographic for this high-tech Marvel superhero attraction. 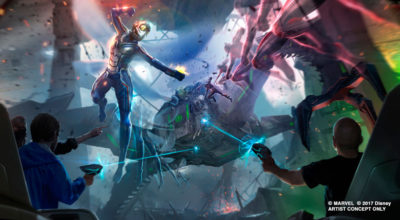 Ant-Man and The Wasp: Nano Battle! opens this March at Hong Kong Disneyland.

It may seem odd that a new Toy Story movie would be all the way down at number nine on a list of Disney things to be excited about this year, but bear in mind that Toy Story 3 felt like the perfect conclusion to what is undoubtedly Pixar’s most beloved film series. For that reason, a good number of fans are understandably hesitant to see the narrative continue. Regardless, this fourth entry will see Woody (Tom Hanks) embark on a quest to recover the long-missing Bo Peep (Annie Potts), with the help of his pals Buzz Lightyear (Tim Allen) and Jessie the Yodeling Cowgirl (Joan Cusack), of course.

Now that we’ve had time to mourn the closure of The Great Movie Ride, it’s time to look forward to its replacement: the first ride-through attraction at a Disney theme park to feature Mickey Mouse and friends. Based on the animation style and humor of the recent Disney Channel Mickey shorts, this new ride will have guests board a train conducted by Goofy, passing through a simulated movie screen, and experiencing a “zippy zany out-of-control adventure” using what Walt Disney Imagineering is calling “2 and 1/2 D” technology, which brings depth to images without the need for glasses. 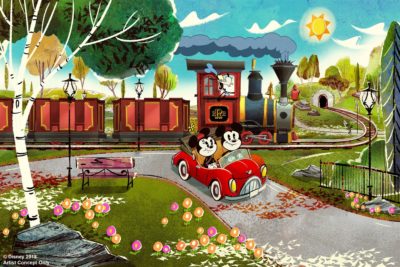 The 21st movie in the Marvel Cinematic Universe will find heroic Air Force pilot Carol Danvers (Brie Larson of Room and Kong: Skull Island) caught in the middle of an intergalactic conflict between two alien races known as the Kree and the Skrulls. Back on Earth, Captain Marvel meets a younger, two-eyed Nick Fury (Samuel L. Jackson) and interacts with characters from the Guardians of the Galaxy films, while facing off against the evil Talos (Ben Mendelsohn of Rogue One: A Star Wars Story). The first Marvel feature with a solo female lead is certain to elicit enthusiastic responses from the franchise’s fervent fanbase. 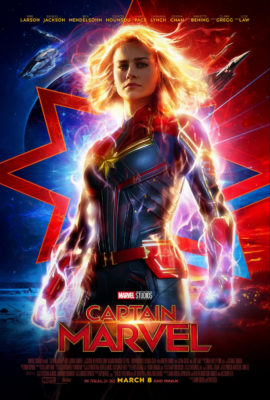 This is the big one, folks. The Ultimate Disney Fan Experience is returning for its biennial event at the Anaheim Convention Center, and we simply can’t wait to see what’s in store for all the announcements, star-studded presentations, and celebration of all things Disney this year. Animation, Live-Action, Disney Parks, Pixar, Marvel, Lucasfilm, television, and more will all be featured over three days of non-stop Disney fun. If you’re passionate about the House of Mouse, D23 Expo is without a doubt the place to be this summer. 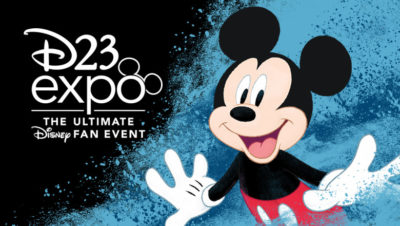 The Last Jedi may be considered the most divisive Star Wars movie yet, but the vehement passion from both sides of the debate surrounding that film only means people still care what happens with the future of the George Lucas-created epic. For the next chapter, the as-yet-untitled climactic entry in the Skywalker saga, co-writer and director J.J. Abrams has taken the reins again, after delivering a smash hit with 2015’s The Force Awakens. What will become of Rey, Finn, Poe Dameron, and the rest of the Resistance? How will they take down Kylo Ren and the First Order? What will be our final send-off for Luke, Leia, Lando, and the rest of the legacy characters? We can’t wait to find out. 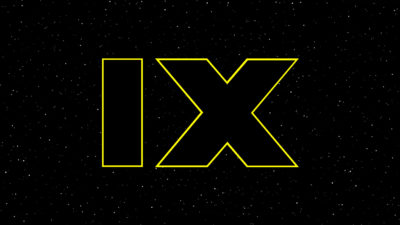 Star Wars: Episode IX will be released into theaters on Friday, December 20th.

It sure seems like Disney as a company gets bigger every year. But the pending acquisition of 21st Century Fox’s assets will mean one of the most Earth-shattering corporate restructurings in the history of the entertainment industry. Not only will Disney come into control of franchises like Avatar, Die Hard, The Simpsons, Planet of the Apes, Family Guy, The X-Files, Predator, and Alien, but the movie rights to Marvel character groups like X-Men and Fantastic Four will finally return home after being licensed out to Fox in the 1990s. It’s mind-boggling to even consider the possibilities.

The 21st Century Fox acquisition is expected to go through early this year.

Time to move over, Netflix. The Walt Disney Company’s upcoming streaming service will be the one-stop location to watch all the new content from Disney and its subsidiaries right in the comfort of your own home. Not only will the studio’s theatrical releases find their way to Disney+, but the service will debut numerous original movies, television shows, and both live-action and animated series from Marvel Studios and Lucasfilm. Between this and the previous entry on this list, Disney’s plan for global domination certainly looks to be in its final stages. 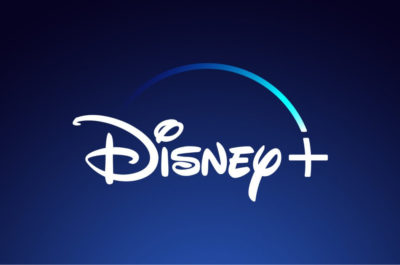 Disney+ is expected to become available to consumers late this year.

It was the snap heard ’round the Marvel Cinematic Universe: Thanos (Josh Brolin) acquired the sixth and final Infinity Stone, and wished away half the population of every species everywhere. While the Mad Titan may not have considered the long-term futility of his Infinity War actions, our heroes in the Avengers still have to deal with the fallout. With Tony Stark AKA Iron Man (Robert Downey, Jr.) lost in space, Captain America (Chris Evans), Hulk (Mark Ruffalo), Black Widow (Scarlett Johansson), Hawkeye (Jeremy Renner), and Ant-Man (Paul Rudd) must formulate a plan to get their buddies back from nonexistence and bring down that dastardly purple-faced supervillain. 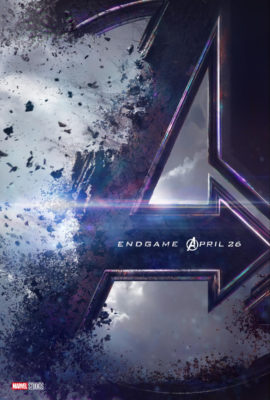 The biggest single-land expansion in the history of Disneyland will bring A Galaxy Far, Far Away to our Southern California backyards this summer, with the same area opening later in the year down at Walt Disney World in Florida. Fully immersive, with an incomparable amount detail and two blockbuster E-ticket attractions, Star Wars: Galaxy’s Edge is the next logical step in world-class theme park design from the company that does it best. Since Disney CEO Bob Iger first announced these areas at D23 Expo 2015, we have been counting down the seconds until we can finally walk through those entrance gates and take our first steps into a larger world. 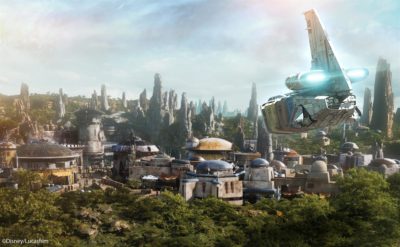 In case you’re at all curious, here’s a spreadsheet breakdown of the voting process that led to the order of the above list, with five members of the Laughing Place staff represented. Votes were tallied, averaged, and summed, with the final result representing an ascending lineup of our most highly anticipated Disney events in the coming year. 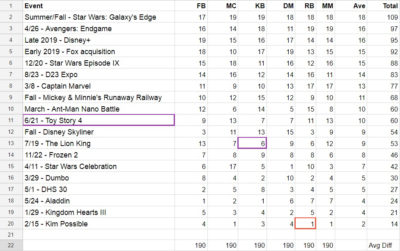