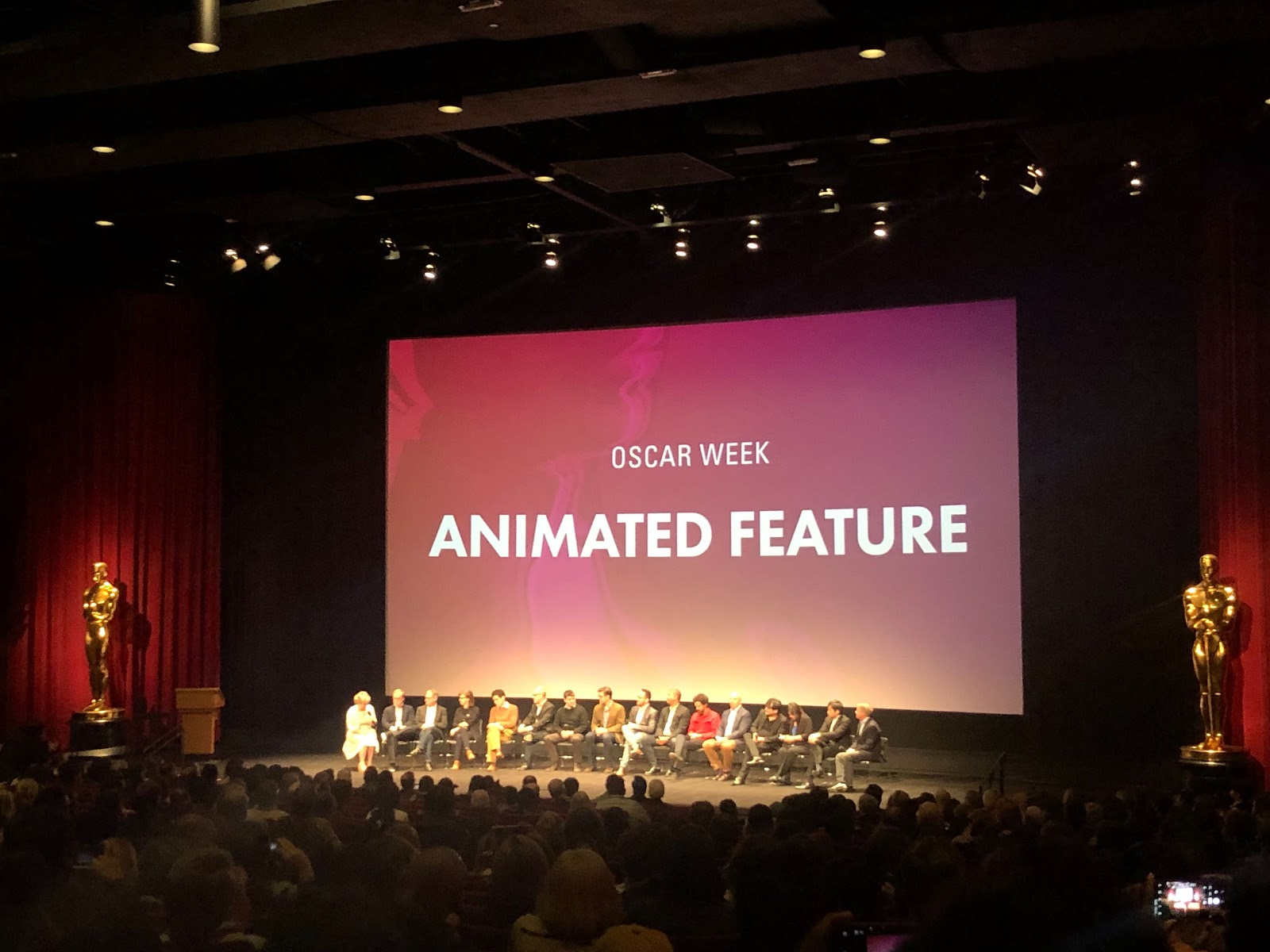 Oscar weekend is upon us! Today, the most revered, star-studded, and important ceremony in Hollywood– The Academy Awards— takes place, and leading up to the big event the titular Academy has held a series of panel discussions for Oscar Week. Saturday morning saw the installment of that series which will be of most interest to Disney fans: the one centered around the Animated Feature category.

Nominated for Best Animated Feature at this year’s Oscars are Disney’s Ralph Breaks the Internet, Pixar Animation Studios’ Incredibles 2, Sony’s Spider-Man: Into the Spider-Verse, Fox’s Isle of Dogs, and Studio Chizu’s Mirai. For those keeping track, that’s only one out of five that has absolutely nothing to do with Disney. Filmmakers representing each of those movies took the stage at the Samuel Goldwyn theatre in Beverly Hills the morning before the big day to discuss their creative processes, the specifics of each piece, and their hopes for the future of animation.

During the Incredibles 2 Q&A, host Bonnie Arnold (producer of the original Toy Story) asked Brad Bird if he had felt pressure from Disney and Pixar to make a sequel to his hit 2004 superhero adventure The Incredibles. “If a film makes money, they always want another one, even if it’s not warranted. Hollywood has a long tradition of that,” he responded. “Yeah, there was pressure, but it was a nice, friendly, not-too-pushy pressure from Pixar.”

“I had the idea for the role switch when we were promoting the first film, and I also know that we had the unexploded bomb of Jack-Jack. The audience knew that he had multiple powers, but the Incredibles did not. If there was going to be another film, that was definitely going to be a big part of it.”

For the Isle of Dogs portion of the event, Steven Rales apologized for the absence of director Wes Anderson, who is currently overseas in production on his next live-action feature, entitled The French Dispatch. But Rales talked about his experience working with the quirky filmmaker: “He’s got a remarkable sensibility, a tremendous sense of humility, which I think makes its way into his writing and onto the screen. Animation offers Wes an opportunity to explore his visual aesthetic in a way that’s different. There’s a playfulness to it, there’s an artform to it, because so much of it is handmade. I think he feels that he can put his imprimatur on a very different medium.”

“Wes has the ability to see and understand the flaws in all of us. None of us is perfect, and I think he likes to explore both the positive and negative side of human beings. In this particular movie, he was attracted not only to the imperfection of certain characters, but also to Japanese cinema, and for some reason, trash.”

Speaking of Japanese cinema, the next feature discussed was Mirai, the slice-of-life tale of a four-year-old boy who grows jealous of his newborn sister after his parents bring her home. Momoru Hosoda said, “I tend to make films that are inspired by my own life” and he grew up an only child who eventually became jealous of his own son for getting to have a sibling.

“The biggest challenge was making a four-year-old boy the protagonist of a feature film,” continued Hosoda, who also remarked on the concept of being a stay-at-home father in Japanese culture. “The concept of what a family is is changing and I really wanted to depict that in my movie.”

Rich Moore and Phil Johnston were predictably the most irreverently hilarious speakers during the morning’s proceedings, commenting that Clark Spencer (who they call the “eye of the hurricane”) was so good a producer on Ralph Breaks the Internet, and made production run so smoothly that they’re– jokingly, of course– convinced he “goes home and beats his dogs” and “started that fire out in Malibu.”

But seriously, Johnston and Moore are tired of being asked about that Disney Princess scene. “[Out of] 300 interviews, probably 298 people asked us about the princesses. And we just realized today the other two probably didn’t see the movie.” The two then proceeded to talk about why Vanellope Von Schweetz is a much more important character in the Wreck-It Ralph sequel (because her journey is the longest), but Ralph is still the protagonist because he changes the most.

The film that brought down the house at this Oscar Week event wasn’t made by Disney, but it does star a Disney-owned character: Spider-Man: Into the Spider-Verse has three directors, and they’re all convincingly passionate about having brought Marvel’s Miles Morales to the big screen. They even compare Spider-Man having been bitten by a radioactive spider against his will to their having been bitten by the creativity bug at a young age, pursuing a career in the arts, and embracing the consequences (and rewards) of that decision.

Watch Spider-Man: Into the Spider-Verse trailer:

Perhaps the most fascinating part of this movie’s Q&A was finding out how composer Daniel Pemberton (Steve Jobs) recorded Spider Man: Into the Spider-Verse’s score: apparenty the full soundtrack was performed by an orchestra, then pressed onto vinyl and “scratched” by a DJ into the finished film. That tidbit aside, wunderkinds Lord and Miller responded to a question about when they first knew the movie was coming together by remarking, “At the premiere.”

The event ended with a gathering of all the nominees on stage, and with Brad Bird pleading passionately for animators to be taken more seriously as artists, comparing them to actors in the way they breathe life into their characters. And with that , Bonnie Arnold wished them luck and sent them on their way to Oscar gold.

This morning we’re at the Samuel Goldwyn Theater in Beverly Hills for @TheAcademy’s series of panels on the Oscar-nominated Animated Features. pic.twitter.com/75euvYmVpR

The 91st annual Academy Awards will take place on Sunday, Feb. 24 at the Dolby Theatre in Hollywood. The ceremony will be broadcast on the Disney-owned ABC Network beginning at 5:00 PM PST.