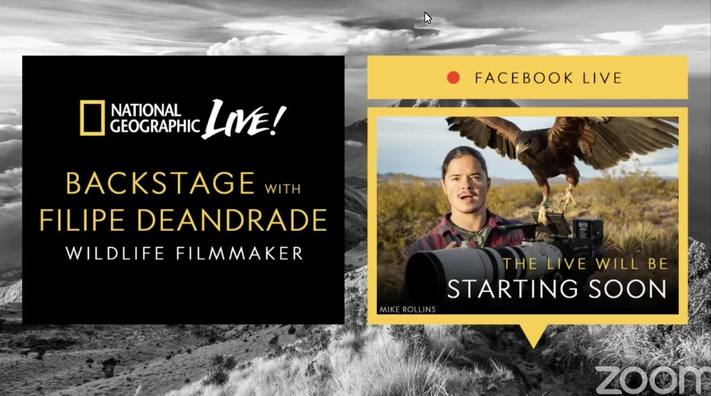 National Geographic Live’s latest virtual event was with Emmy-award winning wildlife filmmaker Filipe DeAndrade. Filipe has participated in over twenty Nat Geo Live events, but this was his first time on the virtual stage. He gave a presentation about three elemental powers and the animals that best represent each. But first, a little background on the adventurous filmmaker.

“I chose to live in a place with Wildlife all around me,” the Brazilian-born filmmaker who was raised by a single mother in the US shared about his current home of Costa Rica. “I want to be able to go outside the door and see animals.” Costa Rica is one of the most biodiverse locations in the world with over fifty different species of hummingbirds, thousands of dolphins, five species of sea turtles, and four species of primates. “I always like to inject a little bit of my personal story and a little bit of background into what I do,” he shared as he pulled out his iPhone to Facetime with his mother, Selena. “She is every bit as formidable as any apex predator I’ve ever seen in the wild,” he added, saying that he’s never been scared while out in the wild because his mother raised him to be fearless. “My mom is literally the most special person in my life.” His mother is a nurse and he sent out a special shoutout to any healthcare workers watching to thank them for their heroic work on the frontlines.

The first elemental power he talked about was water and the animal that best represents this element is sharks. “Sharks are some of my favorite creatures on the planet. Why? Because in my opinion, they’re one of the most important creatures on the planet.” After sharing some incredible facts about different types of sharks and some footage he shot in the wild, he shared why they’re essential to the planet’s survival. Half the world’s population depends on the ocean as a food source and half the world’s oxygen comes from the ocean. “Sharks are the vacuum cleaners of the ocean,” he shared, explaining how they clean out the dead and dying to keep the balance in the ecosystem. “They have outlived the dinosaurs. They’ve been on the planet for 450 million years.” He also talked about how he documents sharks with his Red Gemini 5K camera with a little help from a marine explorer in a shark onesie. He said you have to make eye contact the entire time, which lets the sharks think they’re facing another predator and earns their respect. Felipe keeps his body calm and knows that if their pectoral fins are out to the side, they’re calm, too. If their pectorals go down, it means they feel threatened and are about to attack. It’s also important to keep your mind and body calm because sharks have a sixth sense called ampullae of Lorenzini, which detects electronic waves and can pick up on how fast your heart is beating. He shared an image he took on his Instagram of his friend Jim calmly swimming next to a relaxed hammerhead shark who was approaching Felippe to get a better look at him. 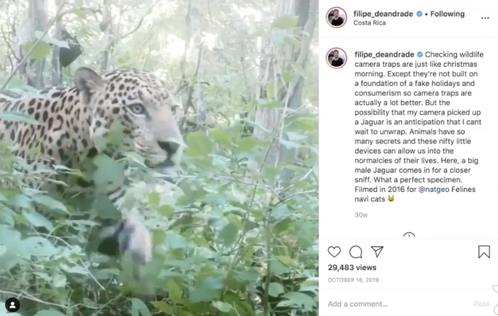 The next habitat was earth, represented by the jungles. “In my opinion, there’s no animal that best represents the secret, the spirit, the allure, and the love of the jungle than the jaguar,” Fellipe shared. Researchers follow the scat (poop) and urine trails to learn more about them. “When I’m on the metaphorical hunt for a jaguar, it’s a very detailed process. You have to understand the secrets of what that animal is going through.” He will dissect the scat to understand what the jaguar is eating, where it’s roaming, and its health. Males can patrol an area of 100 km and females patrol an area half that size. Fellipe’s secret to success with documenting jaguars in the jungle has been to learn an animal’s roaming habits and set up camera traps.

“In Costa Rica, it’s the only country where they exist and they are endangered,” he shared about the importance of studying these animals before time runs out. He wants to share as much information about them with the local community to get everyone on board with protecting their habitat. One of his documentary films, Jaguar Beach Battle, premiered in 2018 on National Geographic. He waited for 21 days in a jaguar hide in the sweltering jungle heat but was rewarded when he found a pregnant female who was named Amanda. National Geographic let him name one of the cubs, who he dubbed Jane after his hero, Jane Goodall. The other cub was named after Filippe and he was very honored. “This is one of the most challenging things I’ve ever done. No, the most challenging… In the brush and the thickness of the forest, you’ve gotta look for the scat cat and urine and prints… Difficulty level, 10/10 when it comes to jaguars.” 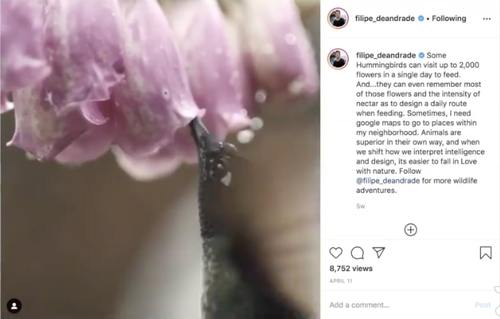 The last element was air. “My favorite avian ambassador is none other than the hummingbird,” he shared, adding that they're the most important pollinator in the world. Their long noses allow them to get deep into flowers to find the nectar, which coats their face and beak in pollen that they spread to the next flower. They can hit 2,000 flowers in a single day of feeding and migrate 3,000 km in a season. “They are literally breathing life into every single thing that they come into contact with.”

“Nature is all around us,” he shared, grabbing his camera and bringing his audience into his backyard. “Right here in California, there is a hummingbird nest right outside my window.” He showed off the small nest while talking about how the babies are the size of a Tic Tac. “What’s incredible about these young pollinators is that the nest is built out of brush and debris that the female finds in the yard and then weaves together out of spider webs.” “These are three of my spirit animals, some of my favorite creatures that best represent the natural world,” he shared to close out his presentation. But he also shared his philosophy about a bonus fourth element that is often overlooked. “In my opinion, the element that brings all those things together and is responsible for ensuring that we have these beautiful creatures and their habitats for generations going forward is the youth.” He shared that adults talk about kids being the future, but he sees kids as having all the power right now. They can help educate their parents and influence their political decisions to bring about responsible conservation right now.

Filippe DeAndrade shared his gratitude for supporters of National Geographic and he is currently the recipient of two grants. The first is a research grant in the Bahamas to learn more about tiger sharks mating habbits along with his friend Austin Gallagher. The second is on the theme of helping kids take action now with a conservation education grant in Costa Rica public schools that he hopes to expand to the rest of the world someday. You can watch the full live event on National Geographic Live’s Facebook page and check out the schedule of upcoming live events.