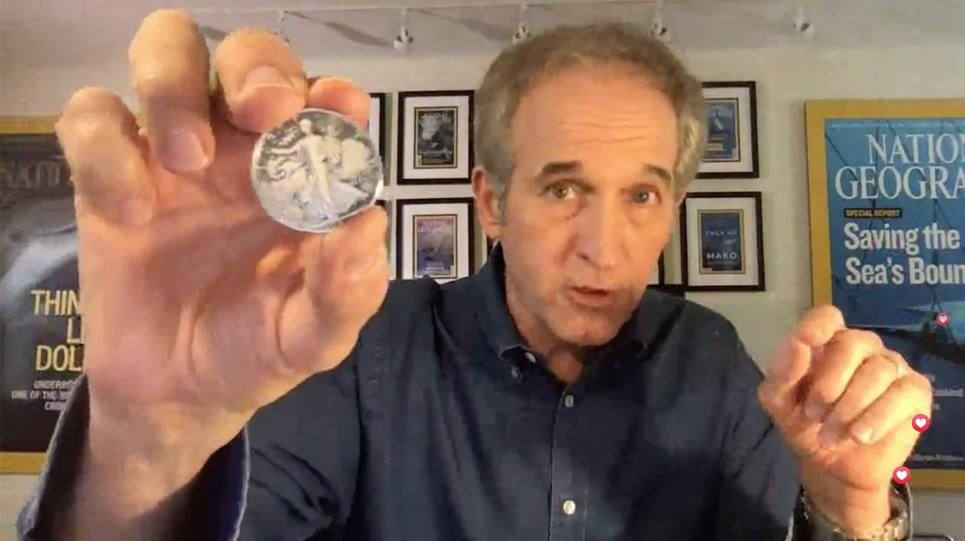 Broadcasting live from his studio in Southern Maine, Brian Skerry most recently worked on the Earth Day special Born Wild: The Next Generation on the humpback whale segments filmed in Hawaii. His trip was cut short due to the global pandemic and he self-quarantined in his office for two weeks before seeing his family just in case he was contagious.

Growing up in Massachusetts, he was inspired as a child by Jacques Cousteau and National Geographic, imagining himself as an ocean explorer in his backyard pool. He became a certified scuba diver in 1977 at his local YMCA and he showed off his original diver card. On his first certification dive in a stone quarry, he found a silver half dollar that has become his lucky charm, accompanying him on every trip he takes. 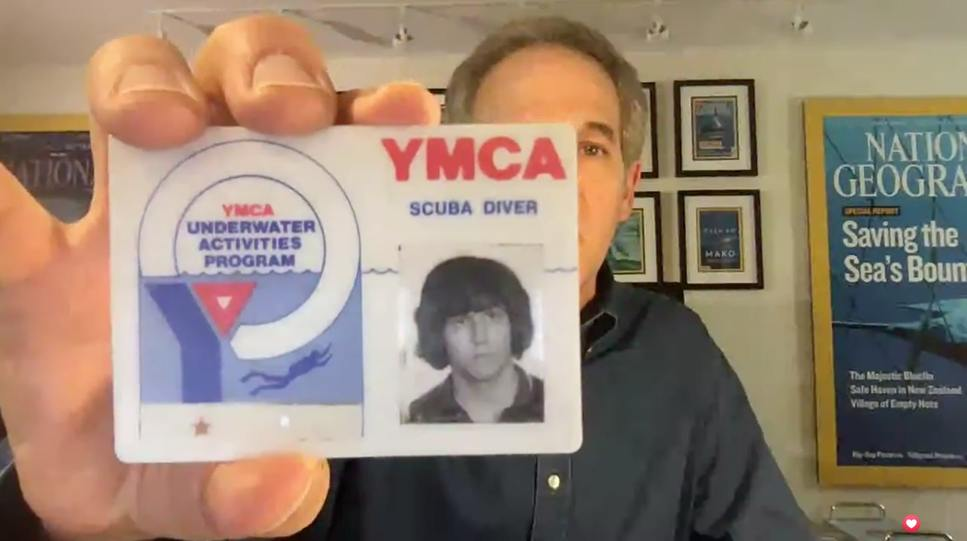 His enthusiasm for diving and photography was soon combined as he began photographing local marine wildlife and shipwrecks, leading to his first book. One of his first shipwreck treasures was a binnacle stand from 1860 shaped like three dolphins. He explained that in Maine, it was legal to take items from shipwrecks. He shared a photo of his find from 1985.

Brian eventually became friends with Bill Hurtzinger, one of the National Geographic photographers. Bill had made trips to sunken pirate ships off the coast of Maine before and determined that the water was too murky to get great shots of the wrecks, but National Geographic really wanted coverage of them. He gave Brian the opportunity to accept the job, which was a make-or-break deal with a high rate of failure. By having additional divers join him with lights, Brian Skerry was able to capture great shots of the ships, cementing an exciting future with National Geographic for years to come.

Branching out into wildlife stories gave Brian the chance to shadow another Nat Geo Explorer, David Coubilet, and work alongside a personal hero. Peter Benchley was the author of Jaws, a source of inspiration that made Brian want to become a diver, and he spent a month with the late author in Cuba, who signed his first edition copy of the book. The first story that Brian Skerry pitched to National Geographic also became his first cover story in 2004. He documented the arctic Harp Seals where the mortality rate was starting to increase due to shortened ice periods caused by climate change. It ended up being his first environmental story as well and he likes writing about problems and solutions without getting preachy, allowing readers to make their own decisions on the topic. On a similar theme, he shared that when he started his career he would never see plastic in the ocean. Now he sees it all the time, even on remote islands where plastics aren’t common.

One of Brian’s secrets to success is staying optimistic. He shared that hope isn’t a strategy, but it is important and he credits it with getting him through a time when he and an assistant were lost at sea for three hours. They were documenting sealife of Ireland on a sunny day when a strong current carried him and his diving partner out to sea. They were picked up by a local fisherman who answered the radio call and was on his way back from giving a tour of Skellig Islands, which doubles as Ahch To in the recent Star Wars trilogy. When he got on the rescue boat, he was nervous but felt like James Bond as he peeled off his mask and wished he had a tuxedo on under his wetsuit to complete the effect. He introduced himself as “Skerry, Brian Skerry.”

Brian is currently hard at work on a project involving whales and their culture, which will become a National Geographic book in the next few years. His research so far has led him to conclude that whales of the same species have different regional dialects the same way human’s do. Sperm Whales, for example, can tell where another pod is from by the sounds that they make. Orcas have different tastes and food strategies depending on where they’re from as well. Fans can pick up Brian Skerry’s newest books on shopDisney including the coffee table book Shark and a kid’s book called The Ultimate Book of Sharks. Another fun item he shared is a diving hood with googly eyes glued to the back, which he uses when swimming with sharks because they will be tricked into thinking his back is his front and they won’t sneak up on him. He closed his presentation by expressing his gratitude for the assistants that have joined him on his many trips over the years and for National Geographic donors who have funded his research over the past two decades.