Happy 92nd birthday, Mickey! Disney+ launched the new series The Wonderful World of Mickey Mouse with two shorts premiering each week. In this recap of the first two episodes, I’ll be recapping Mickey and the gang’s madcap adventures and also pointing out some of the best in-jokes in each short. In the words of Mickey Mouse: “Everybody neat and pretty? Then on with the show!”

The season begins in the farthest corners of Frontierland. That’s not a Disneyland joke, shots from this episode literally place the characters in Walt Disney’s vision of the American west, complete with the Mark Twain and all! 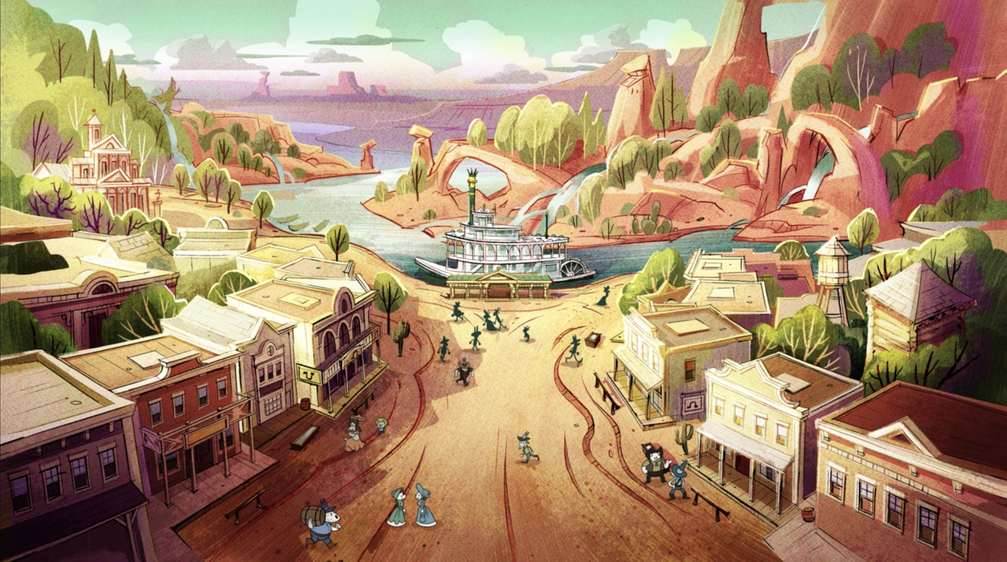 Mickey, Donald and Goofy are western wranglers and instead of cattle, they wrangle wheels of cheese. But when Peg Leg Pete and his gang of weasels (originally from The Adventures of Ichabod and Mr. Toad) steal their herd, Mickey and his gang have to get a little sneaky to steal them back. Disguised as a wheel of cheese, Mickey saves the herd through song, delivering them back to his sweetheart Minnie. The episode features a fun new song about “The Code” that features a cameo from one of my favorite obscure Disney characters, Humphrey the Bear! An homage to the western film genre, Mickey, Donald and Goofy get very serious when they say “The Code” outside of the song. In these moments, they hilariously transform into rugged western movie stars like Clint Walker. Look at this guy… 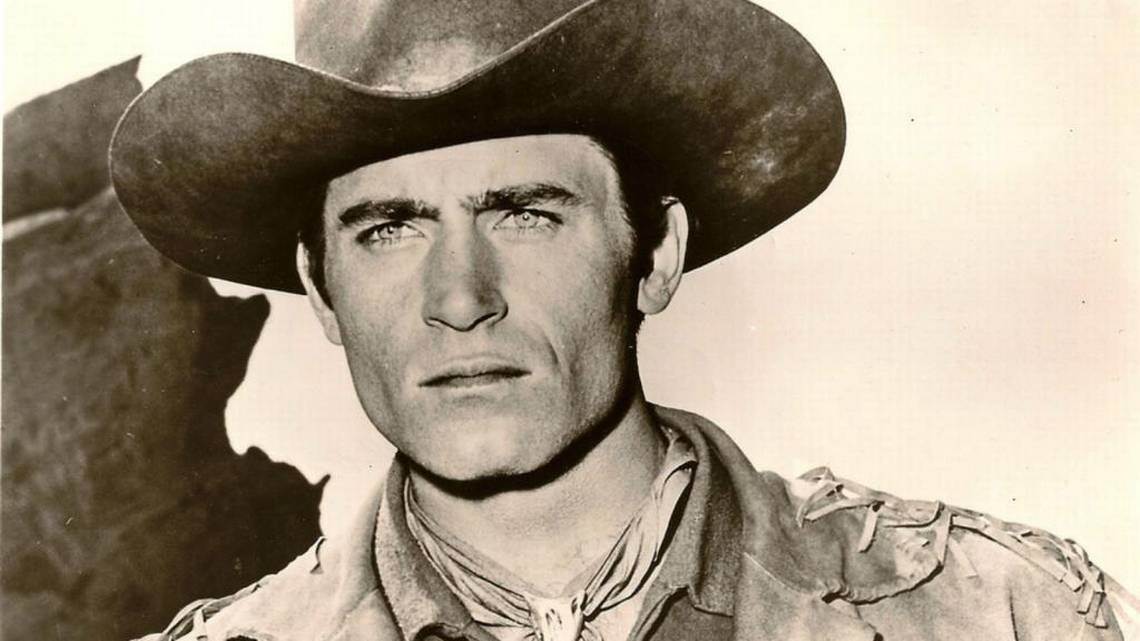 …And now look at these guys. 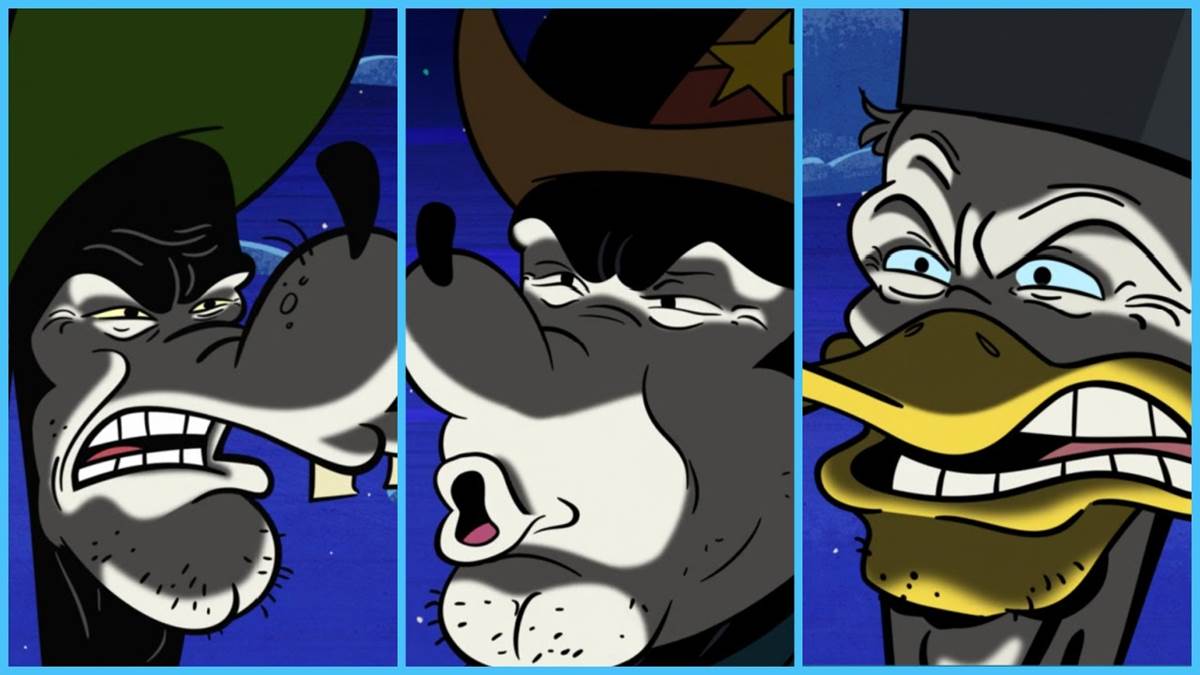 Another fun in-joke for Disney fans is the Two Ears Ranch run by Minnie Mouse. The horse barns at both Disneyland and Walt Disney World are called the Tri-Circle D Ranch, a nod to both the three circles that make up the shape of Mickey’s head, but also to a Mickey Mouse Club serial called Spin & Marty, which was set at the Triple R Ranch (Andy wears a shirt from the ranch in the original Toy Story). More Disneyland fun abounds in the second short, this one celebrating Disneyland’s past. It’s set in Tomorrowland of the 1950’s and the opening shot finds Mickey, Donald and Goofy walking past the old Hall of Science. If you’re a big fan of the Mickey Mouse series, it’s actually appeared in three shorts before (“Down the Hatch,” “Split Decision,” and “Outta Time”). It’s inspired by the 1955 attraction Monsanto Hall of Chemistry. That building is now the home of Star Tours. Coincidentally, the rest of the episode takes place inside another Monsanto sponsored Disneyland attraction, the Monsanto House of the Future, which opened in 1957. Another one of my favorite lesser-seen characters, Professor Ludwig Von Drake, leads Mickey and his pals on a tour outside of the house. Mickey is very excited to experience “Tomorrow’s technology today,” but when he asks Von Drake when they can see it, he says “Tomorrow, because that’s when it opens.” When the Artificial Intelligence opens the door while Von Drake isn’t looking, Mickey convinces Donald and Goofy to sneak inside with him. 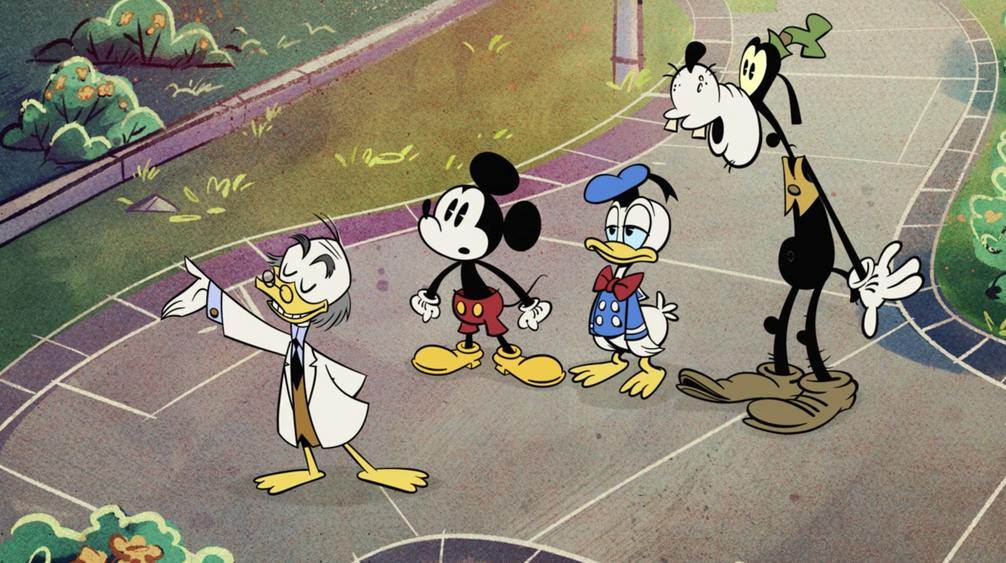 Inside the house, the AI (voiced by Alan Tudyk) starts to fulfill all of their needs. He cleans Mickey up and feeds him breakfast and puts Donald in a relaxation chamber. But things get a little complicated when Goofy starts spitting out needs at a rapid pace, causing the house to overload. Mickey tells Goofy to just do one need at a time, causing the goof to have a panic attack trying to pick just one. Excited by the high tech house, Mickey sings the Sherman Brothers classic “There’s a Great Big Beautiful Tomorrow,” originally written for Carousel of Progress. But Mickey’s first annoyance with the house comes when he’s trying to read Bambi and the AI ruins the ending. The AI goes overboard trying to meet their needs, getting rough with Donald’s massage and intervening when Mickey tries to bake cookies for Minnie. It forces Mickey to write a lot of poems for Minnie and then puts him in a room full of paintings the AI has created, one of which is a photo of one of the first Minnie Mouse costumes made in the 1930’s, which Mickey is understandably frightened by. 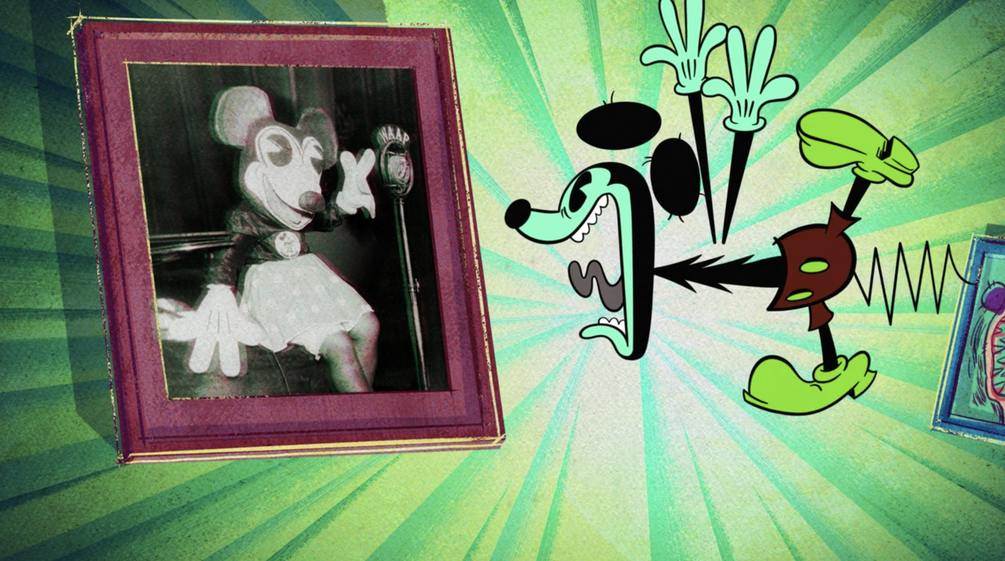 As the AI loses control and traps the gang inside, Mickey tells Goofy to let out all of his needs, destroying the house and setting them free. I hope you’ve enjoyed this recap of the first two shorts of The Wonderful World of Mickey Mouse. Both shorts are now streaming on Disney+ and two new shorts will premiere on Fridays starting November 27th.