A fashion icon as special as Minnie Mouse deserves to be celebrated. Over the past 92 years she’s inspired millions with her positive attitude, the way she supports her friends and yes, her sense of style. Minnie has had such an impact that Create & Cultivate decided to build an entire event around her! 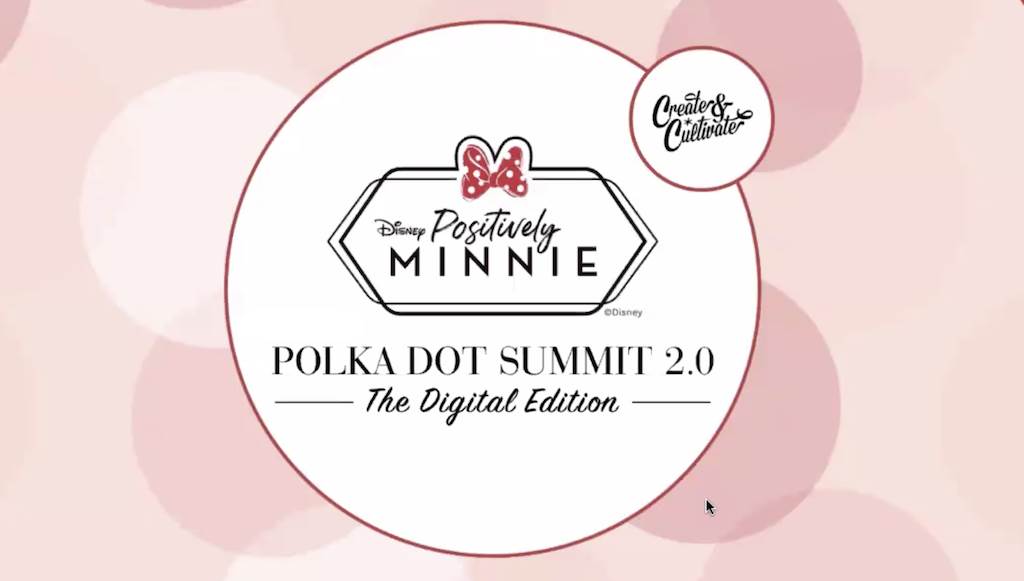 This weekend the media company hosted their Positively Minnie Polka Dot Summit 2.0, an uplifting celebration of positivity and fashion inspired by none other than Minnie Mouse! While previous iterations were held in person, the 2021 program was offered as a 2-hour virtual event and featured a combination of livestream and pre-recorded sessions. Taking advantage of the now essential virtual format, Create & Cultivate gave audiences a delightful and almost personal experience with each sessions that featured conversations with Queer Eye’s Jonathan Van Ness, Black-ish’s Marsai Martin, and model and entrepreneur Hailey Bieber.

Adding to the fun were pre-recorded sessions with stylist Maeve Reilly and lifestyle blogger, Bri Emery. Maeve gave tips on putting together three looks for going out or staying in that all featured Minnie inspirations. Bri guided audiences through all the steps of hosting a casual brunch for yourself or friends, and then transformed that same space into a comfortable way to Work From Home. 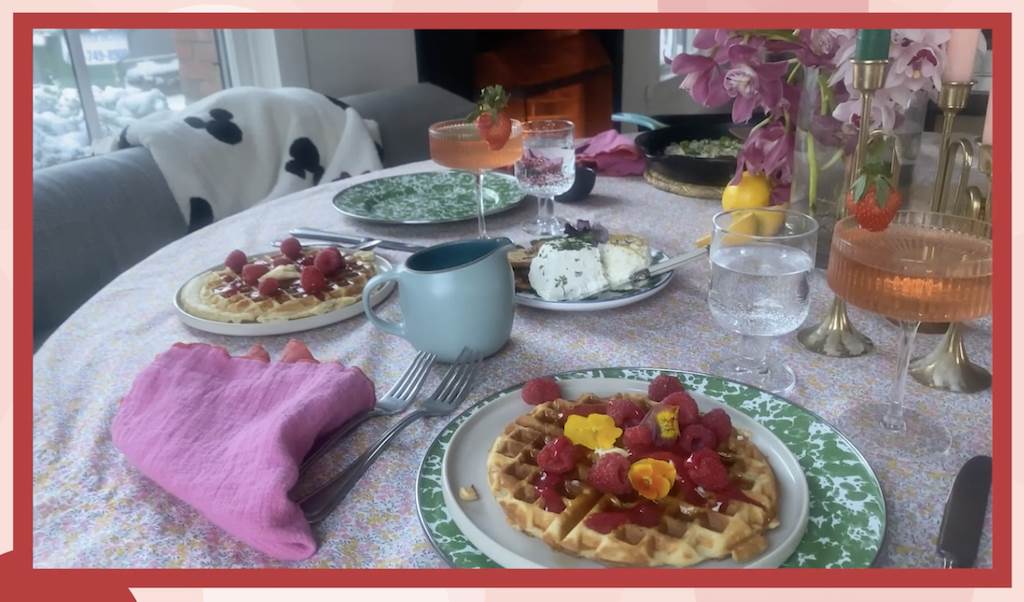 Throughout the morning each speaker touched on different topics, however there were several recurring themes that everyone wanted to focus on: Positivity, Confidence, and Self Care/Self Love.

Starting off the event was Jonathan Van Ness who was joined by moderator Ashlee Marie Preston. The duo talked about learning to be fearless and confident and determining when to listen to your inner critic. Jonathan mentioned that we have two critics: one that will help us to build confidence and one that only serves negativity. He says it’s important to, “listen to the wise.” And when struggling with the feeling that you’ll never have or never be enough, he encouraged using those moments as an opportunity for growth.

From the time he was young, Jonathan knew he wanted to be famous like a skater, gymnast or dancer, but he knew he didn’t have those skills. He was bullied his entire youth for being different and expressing his feminine side, but he realized that what he could do was make sure no one else experienced that same mistreatment. Being famous would be too easy, what he wanted to do was create change.

He focused his attention on doing what he loved which was hair styling. Through that pursuit he met clients who not only supported him monetarily, but also mentally and emotionally. Eventually his experiences led to global opportunities and have given him a platform to cultivate awareness, love, and ultimately change. 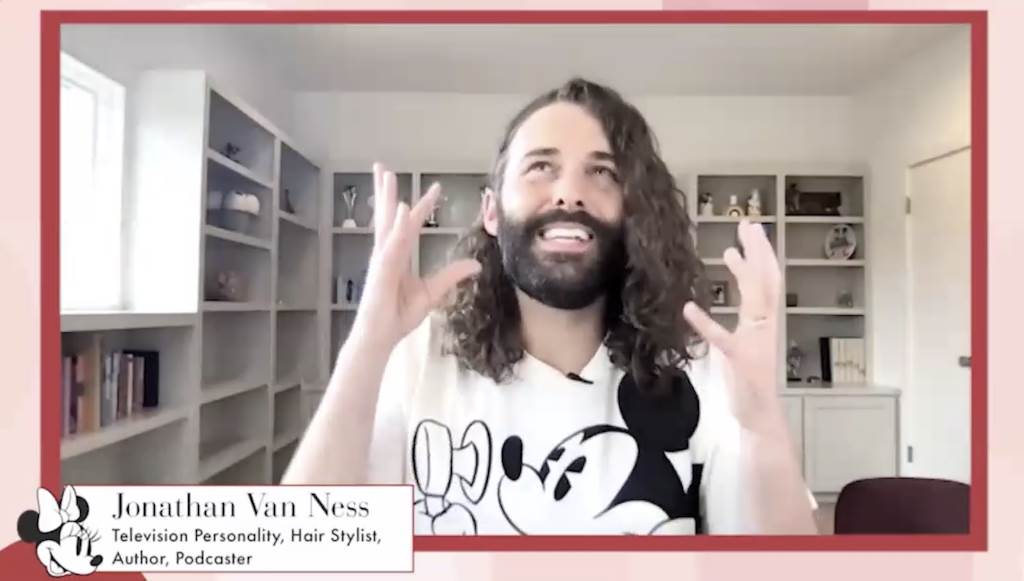 Jonathan says he’s authentic in his joy, but doesn’t share that with everybody, stating that it’s important to have boundaries. However he encourages giving yourself permission to follow your passions, the things that give you joy.

Before saying goodbye, Ashlee Marie asked Jonathan some rapid fire questions that included a few about Minnie Mouse.He says Minnie represents, “bold, strong, femininity,” and his must have Minnie look is the iconic polka dot dress. When asked what being bold means he responded, “sitting with your fear long enough to do it anyway.” And finally his #1 tip for cultivating confidence, “positive self talk.” 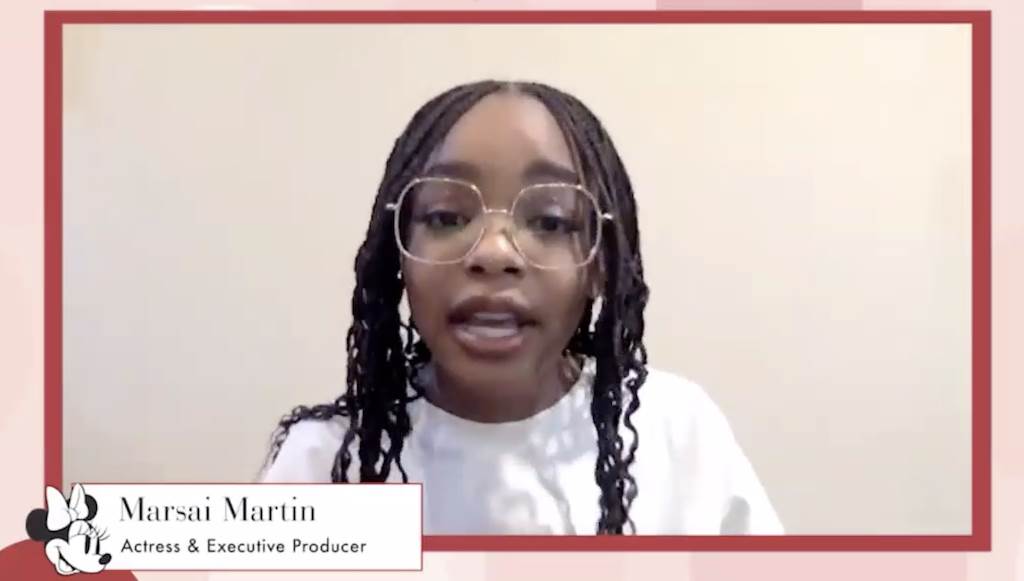 Marsai Martin was the next speaker to take the stage for the FireSide Chat and was joined by moderator Olivia Hancock. At just 16 years old, Marsai has already earned numerous awards and accolades, developed original projects, and has become a producer. She loves the entertainment industry and is most recognized for playing Diane Johnson on Black-ish. She landed the role at the age of 9 and says she loves that the series shows Black families, Black power, Black love and tackles timely, real life topics.

When asked about how she gets past being the first and often youngest in the room, she says she’s never alone. Her parents are with her and she’s worked at becoming more comfortable meeting new people. Her trick is to act like everyone is already your friend and take that energy with you. Marsai says having a support system is important, and being yourself is what matters.

As for remaining true and authentic to who she is, Marsai says she takes self care days which include turning off her phone. Social media tends to take people out of reality, and she encourages loving the reality you’re in. Part of loving reality is doing what makes you happy. “The more you care for yourself, the more you become confident with yourself.

Another way she works to protect her mental health and confidence is by avoiding the comments because there can be so much negativity. However, when she occasionally does peek and feels like responding, her method is to kill the haters with sarcasm.

Before leaving, the ladies chatted a bit about Minnie Mouse and Marsai revealed that Minnie inspires her with her clothing, her status as a global icon, how she remains true to herself, and the way she’s sweet to everyone she encounters. Her Minnie must haves are yellow shoes, polka dots and red lipstick. She couldn’t remember the last bold move she took, but Olivia suggested that she makes so many bold moves daily, there’s no way to choose! Marsai says she’s positively herself when she’s around her family, and her #1 tip for being bold and fearless is being confident in yourself and loving yourself.

Closing out the livestream speaker sessions were Hailey Bieber and Creative & Cultivate CEO and Founder Jaclyn Johnson. Right off the bat, Jaclyn mentioned that Hailey has been a huge Disney fan ever since she was a child. Hailey says she loves how Minnie Mouse exudes confidence and noted the strong feelings of nostalgia attached to the character. She says you don’t forget your first visit to Disney, and as exciting as it is for kids it’s just as exhilarating for adults. People grow up in the parks and with these characters.

Hailey grew up surrounded by a family of actors and learned to love an audience from an early age. That love for the spotlight has helped her discover a natural confidence when she’s modeling, but just like everyone else, she struggles when facing rejection. She said one big casting director told her she wasn’t right for his fashion shows and that made her want to avoid the runway entirely.

When it comes to Social Media she works to remain her authentic self and recognizes that there will always be people who won’t understand her. Like her fellow Polka Dot Summit speakers, Hailey will ignore the comments and won’t read into anything that isn’t helpful. As a way of self care, she stays off Instagram from Monday through Friday and set her account so only people she follows can leave comments.

Jaclyn asked who would be Daisy to her Minnie, but Hailey doesn’t have just one person, she has a team of great women she works with, friends, and her mother. “I feel lucky to be surrounded by strong women, who I can trust, who I know have my back, and are going to speak into my life in a positive way.”

As the morning drew to a close, Hailey donned Rose Gold Minnie Ears to answer some rapid fire questions. Her Minnie must have unsurprisingly are Minnie Ears, and Minnie’s style means, “something and someone who’s captivated their own ascetic.” Minnie is Hailey’s muse, “because she is confident and she inspires me to be more positive.” Hailey’s greatest fashion moment (pre pandemic) was wearing a black Versace gown at the Vanity Fair Gala; she feels positively herself when surrounded with people she loves, and says being bold means being unapologetically yourself.

This was my first Polka Dot Summit and I truly enjoyed the event. As nice as it will be to experience the program in person, having the livestream sessions felt almost intimate as it was just me, the speaker and the moderator. Given the circumstances preventing us from gathering in real life, Creative & Cultivate put together a lovely program that was fun, informative, and positive and I’m looking forward to their next event.