Who would have thought that 500 hours of community service would lead to almost 30 years of a single franchise? Reported to have an originally been quite a bit darker, focusing on an Ex-NHL Player who becomes an alcoholic, and seeks revenge on his old coach by opposing him, Disney bought the story of The Mighty Ducks but obviously changing an element or two, throwing in more comedy and downplaying some of the more mature themes. The story we did get, in case you’ve forgotten over the past few decades, is that of a lawyer, Gordon Bombay (Emilio Estevez), who is pulled over for drunk driving and sentenced to 500 hours of community service coaching a peewee hockey team. The District 5 team is the worst in the league and loses every game by at least five goals. Notably, Bombay was once a player in the same league, for the most elite team actually, the Hawks. Bombay’s time playing hockey ended back then though, after the embarrassment of missing a penalty shot, causing the team to lose in overtime and costing the Hawks the championship. After finding a sponsor for the District 5 team, Bombay’s boss Mr. Ducksworth, the team changes their name to The Ducks, and start winning games managing to make the playoffs. The team inevitably comes to face the Hawks in the championship, who are still being led by Jack Reilly (Lane Smith), who just so happens to be the same coach that Bombay once played for. Spoiler Alert: The Ducks win on a penalty shot scored by Charlie Conway (Joshua Jackson), Bombay’s protege. 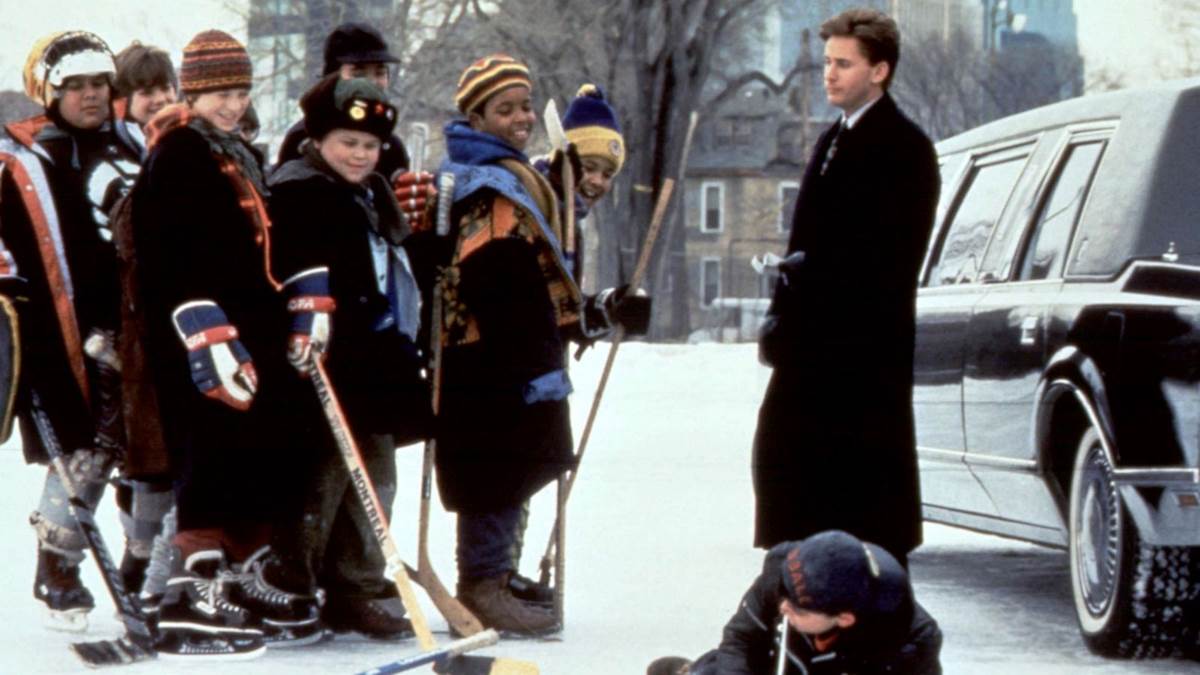 Just some fun very 90’s trivia, Leonardo DiCaprio auditioned for the role of Charlie, as did Jake Gyllenhaal. Gyllenhaal actually was cast, but his parents wouldn’t allow him to do the movie, so Jackson was cast. Juliette Lewis (National Lampoon’s Christmas Vacation) auditioned for the role of Connie before it was given to Marguerite Moreau. It was the role of coach Gordon Bombay who saw the big list of stars, with other actors including Tom Cruise, Tom Hanks, Bill Murray, Michael J. Fox, and even Emilio Estevez’s own brother, Charlie Sheen reported to have been considered for the role. The film’s writer, Steven Brill, reportedly asked to portray Coach Bombay in the movie before Disney execs said they prefer a known actor to play the role. 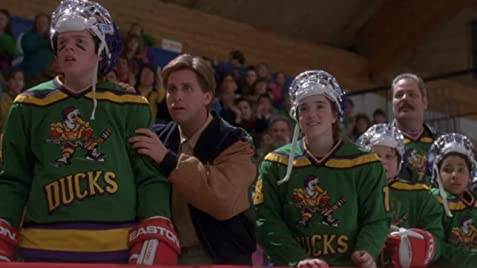 Though critically panned, with Roger Ebert giving the film two stars and saying it was “sweet and innocent, and that at a certain level it might appeal to younger kids. I doubt if its ambitions reach much beyond that,” and a current 23% rating on RottenTomatoes, the film was a box office hit, churning out $50.8 million on the film’s $14 million budget. The fans loved the film, and it has even been nominated for AFI’s 100 Years…100 Cheers (Most inspiring), and AFI’s 10 Top 10, for a sports film, though never making the final lists. Interestingly, the film’s star Emilio Estevez is reported to have said that he has been surprised at the popularity of the movie series. 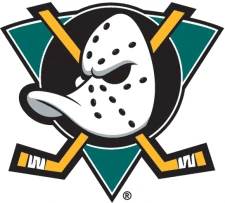 The success of the film also prompted the Walt Disney Company to venture into new territory, a real NHL hockey team, named after the team in the film, The Mighty Ducks of Anaheim were founded in 1993. The team’s first game was against the Pittsburgh Penguins, with the team finishing their inaugural season by setting a record for the most wins for an expansion team. The team remained The Mighty Ducks of Anaheim until 2005, when the Walt Disney Company sold the team, which stayed in Anaheim, CA, and were named simply the Anaheim Ducks. Disney purists might be a little disappointed by the team’s new look that debuted with the name in 2006. 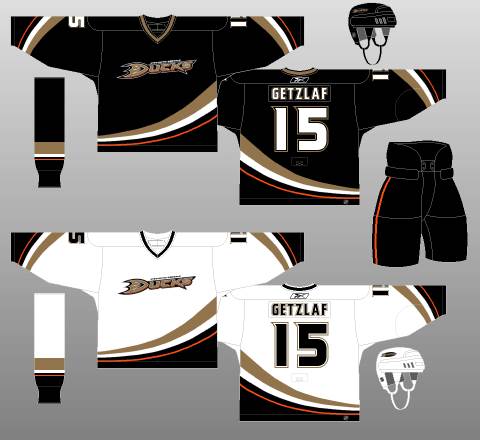 In later seasons, closer to the present day, the team answered to fan outcry and newer jerseys also incorporate the original logo into their design as well as the alternates. 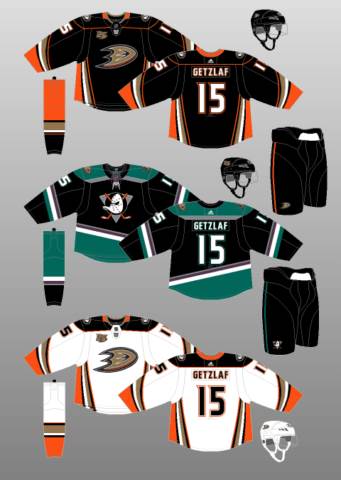 In the 2006-2007, the first season in which the Ducks were not owned by the Walt Disney Company, the team went on to win the Stanley Cup, becoming the first California team, and fourth on the west coast to win the championship.

The Anaheim Ducks, though no longer owned by the Walt Disney Company, still have a good relationship, with Duck Days being celebrated at the neighboring Disneyland Resort. Back to 1994, the inevitable sequel came along, D2: The Mighty Ducks, which sees Gordon Bombay once again return to coaching duties, representing the United States in the Junior Goodwill Games. He reunites most of the original Ducks and introduces that to new players from around the country to form Team USA. After embarrassing losses, the team comes across a street hockey team that teaches them new ways to play, and leads to the recruitment of Russ Tyler (Kenan Thompson), keeper of the infamous “Knuckle Puck.” Once again, Bombay remembers the point of the game is to have fun, and the Ducks begin to win again, working up the ladder to the Finals. 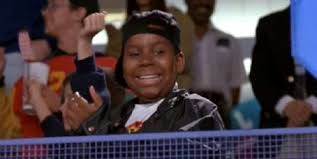 1995 was a silent year for anything new and Mighty Ducks related, but 1996 made up for it with D3: The Mighty Ducks. Coach Bombay wasn’t the main focus in this film, as it shifted to that of Joshua Jackson’s Charlie Conway. After their win at the Junior Goodwill Games, the team is awarded scholarships to the Eden Hall Academy, where Bombay attended in his youth. The team’s arrival is under controversy as the Varsity team’s younger siblings were cut from the JV Team to make room for the Ducks. Charlie is also annoyed by new coach Ted Orion’s way of playing, and leaves the team, but rejoins after a conversation with coach Bombay where he learns more about Orion. The new duo quickly bond in time for the JV-Varsity showdown, and win on a last second goal by Goldberg (who is now playing defense instead of his former Goalie position.) 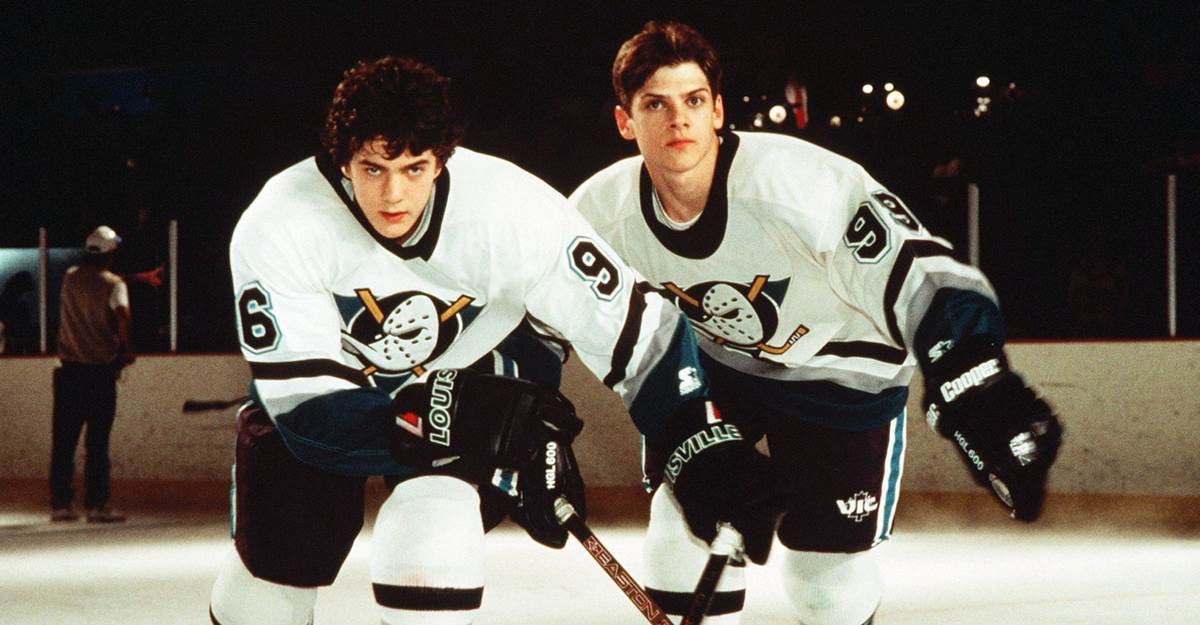 Also in 1996, we saw the debut of Mighty Ducks: The Animated Series.

Lasting only one season, Mighty Ducks: The Animated Series aired on ABC from 1996-97 and had 26 episodes. The show was featured on the legendary Disney Afternoon block of programming, though nearer to the end of that run. The series takes place in the futuristic universe, and follows the adventures of humanoid-duck hockey playing superheroes on their planet, Puckworld.

With the help of a high-tech Goalie mask, an invasion by a reptilian race called the Saurians was prevented, but the evil Dragaunus has escaped a dimensional limbo that they were trapped in thanks to the mask, and try to enslave the people of Puckworld. A resistance is formed by Canard, who has the Mask in his possession, and before sacrificing himself, gives it to Wildwing Flashblade. Using the mask, they enter a new dimension that takes them to Earth, linding in the city of Anaheim, California. 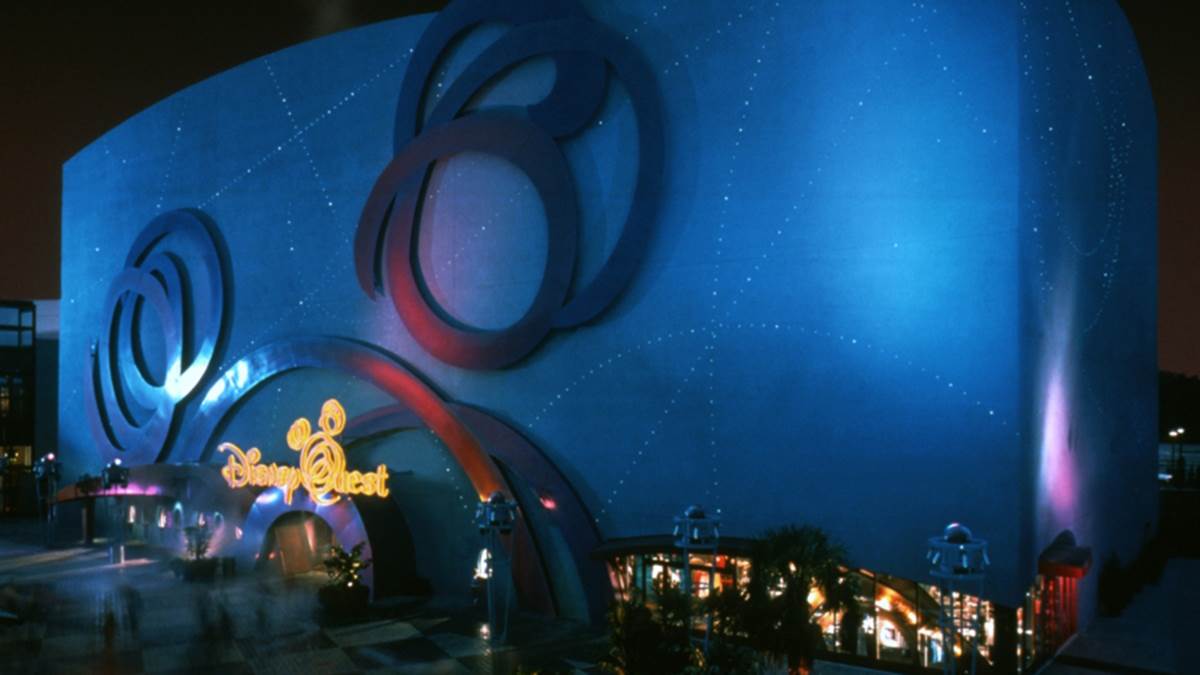 Though it only lasted that first season, Mighty Ducks: The Animated Series provided the inspiration for one of the headlining attractions in a new venture that debuted at Walt Disney World in 1998, DisneyQuest. Originally meant to be a regional experience that would be spread throughout cities around the world, would only appear at Walt Disney World and Chicago. But at the heart of the Indoor Interactive Theme Park’s Score Zone on the third floor was  Mighty Ducks Pinball Slam.

In the game, players would act as a human joystick, becoming a pinball on a giant virtual pinball game. By rocking their duck/joystick back and forth, players would control their pinball on the screen, working to collect the most points and “slamming” and of the eleven other players (up to 12 could play at a time) of the way while doing so. 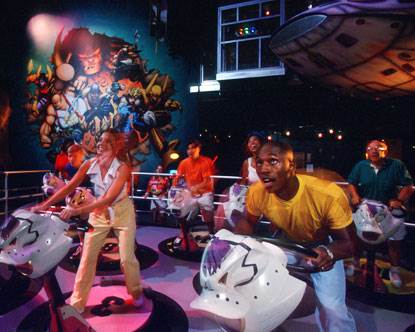 Mighty Ducks Pinball Slam operated at both locations while they were in operation, Chicago from 1999 until 2001, and Walt Disney World from 1998 until 2017. But wait! Guests visiting Walt Disney World that need some kind of Mighty Ducks representation can head to Disney’s All Star Movies Resort! Since the resort opened in 1999,  along with 101 Dalmatians, Fantasia, Toy Story, and The Love Bug, a whole section of the hotel is themed to The Mighty Ducks. The section of the hotel also includes the second of two pools at the resort, The Duck Pond pool. 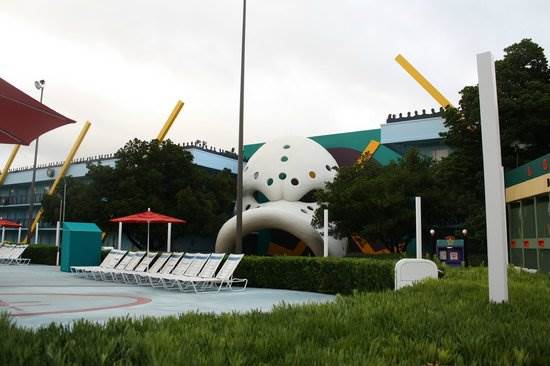 The pool, considered a “quiet pool,” is themed like a hockey rink, with aesthetic designs in both the pool proper and on the pool deck. Figures of the goals, as well as goalie Goofy (in an original Mighty Ducks of Anaheim jersey) flank either side of the pool. As is the norm for Disney’s All Star Resorts, giant themed touches adorn the buildings, including 45 feet tall Hockey Sticks, as well as the giant Duck-Billed goalie mask at the center of either of the building’s two sections. 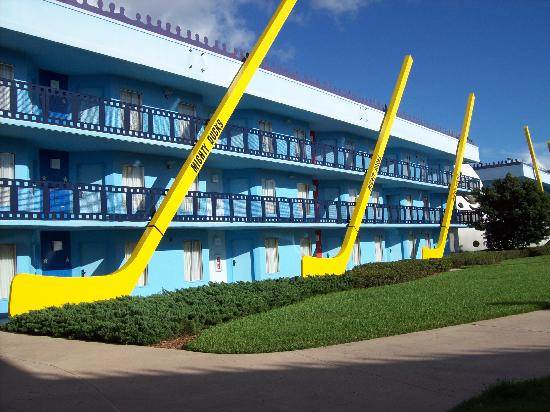 Aside from the occasional appearance at NHL games or ESPN specials, not much new has been happening in The Mighty Ducks franchise since the late 90s. The original movie, long-deemed a fan favorite, has even had special anniversary showings, including one in 2019 where the cast reunited.

It was at the Walt Disney Company’s 2020 Investors Day that it was announced a new series, The Mighty Ducks: Game Changers would take us back to the ice, sparking fans to reunite in excitement on social media and beyond. In the 10-episode season set in present day Minnesota, the Mighty Ducks have evolved from scrappy underdogs to an ultra-competitive, powerhouse youth hockey team. After 12-year-old Evan Morrow (Brady Noon) is unceremoniously cut from the Ducks, he and his mom, Alex (Lauren Graham), set out to build their own team of misfits to challenge the cutthroat, win-at-all-costs culture of youth sports today. With the help of Gordon Bombay (Emilio Estevez), they rediscover the joys of playing just for love of the game.

And as we approach the debut of the show this Friday, Disney has also shared that at a certain point in the new series, some of the original team will be reunited to teach these kids a thing or two. The fictitious team also appears in their very own ESPN 30 for 30 special to catch fans up on what they’ve missed over the last couple of decades in advance of the new series. After almost 30 years, the quack attack is back, Jack! All three of the original films are now available to stream on Disney+, and The Mighty Ducks: Game Changers debuts this Friday, March 26th.