One of several original series based on Pixar classics has arrived on Disney+, and the first two episodes (both now streaming) set up a season of misadventures with the new Monsters At Work. 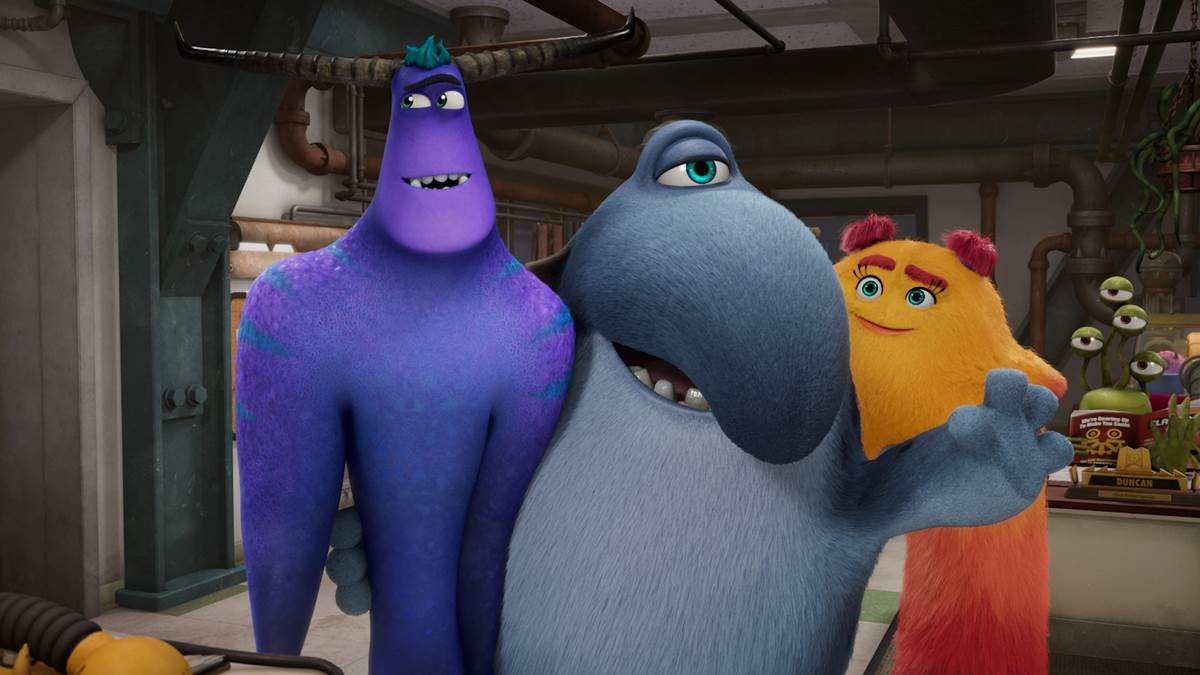 Similar to the opening of Monsters, Inc, the film on which Monsters at Work is loosely based, we see our main character Tylor Tuskmon (Ben Feldman) in the simulation room, waking a child in the night to scare him enough to generate scream energy to power Monstropolis. He is then offered a job via letter while at Monsters University (where he studied to become a scarer) signed by Henry Waternoose.

The prologue is especially insightful if you know the original film, as this one scene immediately sets the tone and premise for what’s to come. If you aren’t that familiar…well, Monsters, Inc is also streaming on Disney+. Familiarize yourself because they don’t really touch upon what happened in the film aside from the fact that the factory has now switched from harnessing scream power to laugh power.

After a new opening number with an a capella rendition of the original Monsters, Inc. theme, we head into the lobby of Monsters, Inc. for a bit of exposition further setting the time and place of this series, with the factory still open and scarers trying to figure out what to do next. We see our familiar friends, Mike and Sulley get promoted, now in charge of the company, with Mike immediately promoting Celia. At the same time, power is flickering and the duo must figure out how to keep the power on and stat!

Outside, new graduate Tylor Tuskmon is ready to arrive for his first day at work, but is completely unaware of the situation he’s about to walk into. He heads to meet Ms. Flint, who is running veteran scarers through the training simulations, now equipped for laughter. Tyler sits in and is confused about what’s going on. Ms. Flint realizes that he was hired before the change so he has to head to new employee orientation (a fun sequence for anybody who’s been in any kind of corporate orientation) where he gets a new assignment as the factory is no longer looking for scarers. As Tylor tries to process what is going on, he says his parents saved all their money from working at a Hardware Store so that he could go to college at Monsters University, but all his HR monster hears is “hardware store” and assigns him to a position on the Monsters, Inc Facilities Team (MIFT).

Fans looking for more Mike and Sulley are now abundantly aware this series is not about Mike and Sulley, but rather Tylor and his misadventures that await him in this new job position. After an encounter with former classmate Val (Mindy Kaling), he discovers that he will be working with her and she takes him down to their office in the deepest basements of the factory.

Here, we are introduced to the rest of the MIFT team, including wacky boss Fritz (Henry Winkler) who wants to be an “uncle-figure,” comfortable in her position but kind of over-it Cutter (Alanna Ubach), eager for the supervisor position Duncan (Lucas Neff), and quiet Banana Bread (Dee Bradley Baker) who only makes noises, but brings in banana bread daily.

Duncan pulls Tylor aside and says he’s on to him, knowing his type thinking he’s out for Fritz’s job when he says he’s been the one waiting for it for so long, kicking off a potentially adversarial relationship between the two.

While this whole formula might seem new and fresh to the target family audience with kids, the adults watching who are familiar with a faux-documentary comedy series about a paper company in Scranton, PA, The Office, might feel these characters are very familiar.

When it all gets to be too much for Tylor, he runs outside where he throws his job offer letter away, but after overhearing some comments from Needleman, seemingly echoing his own thoughts, he goes back inside to the Laugh Floor. Mike and Sulley are there with Celia and Fungus, who see Tylor and send him into a kid’s room thinking he’s been approved by Ms. Flint.

What results is an absolute disaster with Tylor waking the kid, destroying the room, waking the parents, and again, letting a kid into Monstropolis.  The situation gets under control and Tylor apologizes to Mike and Sulley, and Sulley realizes who he is, having personally recommended him for the job after breaking his scare record. During this process, Mike also is inspired to start Monsters, Inc. Comedy Classes with Tylor quick to jump on board.

After some words of inspiration and a reminder to Tylor (and the viewers) that Mike and Sulley started in the mailroom at the company (as seen in Monsters University), Tylor accepts his new position in MIFT and heads down to join his new team, ready to work his way to becoming a jokester on the Laugh Floor. 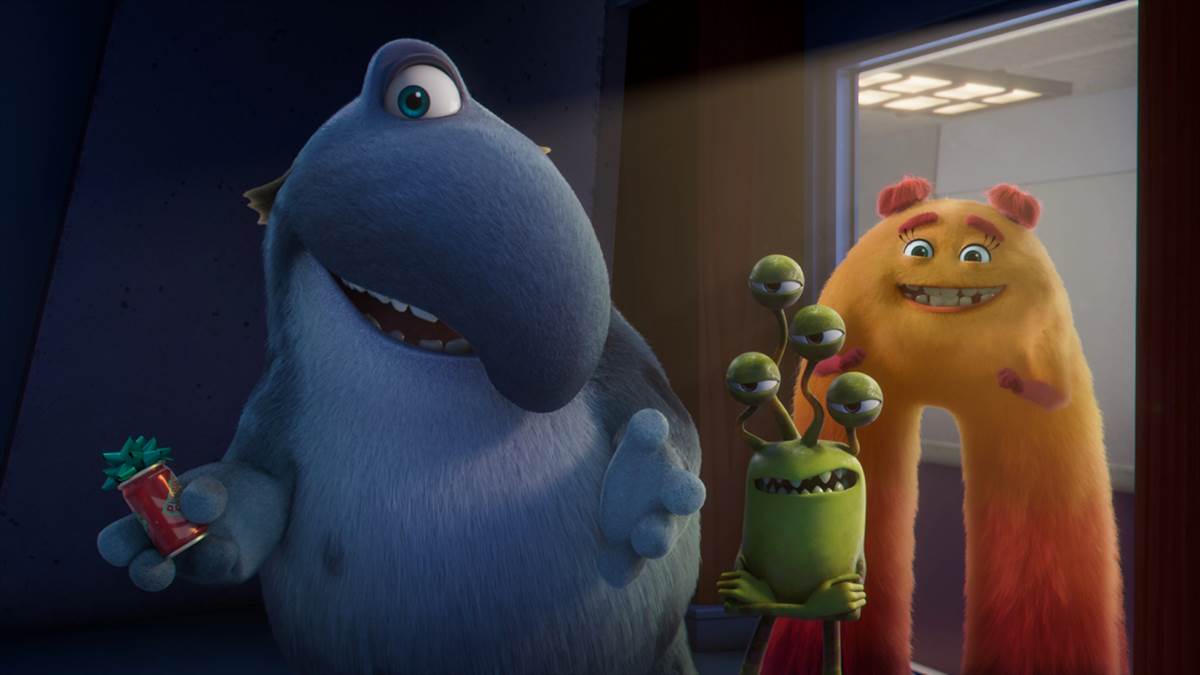 Tylor is getting dropped off for work by his mom, and the rest of the members of MIFT show up, fully embarrassing him. Despite what happened last episode, he’s still not proud of where he is working, eager to leave the group and become a jokester on the Laugh Floor.

After the opening credits, we see Tylor try to talk to the team about what just happened outside the factory but nobody is in the break room with him. This is Tylor’s first day on the team and they’re all ready to subject him to an initiation, officially a MIFTER.

Tylor tells them not to worry about him, he’s only there temporarily, with Cutter asking if he means “Temporarily” like former MIFTER Rodney, who had a fateful encounter with a hydraulic press. Cutter’s stories about prior members of the MIFT team have been a bit of a running gag in the first two episodes of the series, and I truly hope they continue throughout the remaining episodes. Tylor emphasizes that he’s only there until he can become a jokester but the whole thing goes ignored as the team encourages him to “wrench the nut” and finalize his initiation, but he can’t do it and the nut rolls out and down a nearby drain. They say it still counts, and they throw him on a conveyor built through an old door portal. He runs against the conveyor simply because he does not want to be one of them, but the power goes out again.

Up on the Laugh Floor, Mike, Sulley, and Celia are dealing with the continuing power outages with Mike and other veteran jokesters working doubles just to keep Monstropolis powered, despite how tired they are. Mike is falling asleep standing up while getting a cup of coffee, so they all know they must do something. Roz’s sister Roze (who took Roz’s old job) reminds Mike that he has to teach a comedy class, and Needleman gives Mike a 36-hour energy drink. His eyes dilate, ready for comedic hijinks to ensue.

Back down in the MIFT office, Tylor is getting a bunch of welcome gifts, still saying that he’s not going to be there for long, with Duncan eager to watch him go but tries teaching him how to fix damaged power canisters in the meantime, setting him up for failure. Frustrated, he leaves and heads to Mike’s comedy class. Fritz and Val come back with pinatas to continue the welcome party, but blame Duncan for scaring him away.

The comedy class is in progress and Mike is speaking a mile a minute when Fritz shows up with the rest of the MIFTERs to bring him his “Drooler Cooler” drink that he left behind. The entire team is now in his class, which Mike has handed over to Ms. Flint. Mike returns to the Laugh floor where power is still flickering so bad that he becomes trapped inside one of the kid’s rooms. In the classroom, Banana Bread has succeeded in making Ms. Flint laugh, when Celia comes over the loudspeaker announcing that MIFT needs to report to the Laugh Floor to help with a “1320” and save a trapped monster. While Tylor tries to stay behind, Fritz for the first time gets serious and says he is with them while they run out of the room. Ms. Flint asks Banana Bread to stay behind, but the rest of the team reports to the Laugh Floor, where, for the first time, we see the group work together harmoniously and in sync. Tylor is watching, processing everything that is going on and even though they may be a group of “MIFTfits” they work well together. The group needs to wrench a nut, but Duncan’s arms are too weak so they all look to Tylor to solve the problem. The group starts chanting (much like we saw earlier in the episode) and even Sulley looks at Tylor and just says “Wrench the nut.”

Tylor does it, albeit begrudgingly, and the day is saved. Everyone thanks the MIFT team and Tylor who starts to realize there is more than meets the eye here. Back down in the MIFT office, they are celebrating a job well done when Ms. Flint comes down with Winchester (AKA Banana Bread) informing them that he has a new position on the Laugh Floor. Tylor takes over his desk, and might have a little hope that he’ll get to that laugh floor after all.

Before the episode ends, we are treated to Mike’s Comedy Class, a short segment featuring a bit of a rhyme about how to make kids bust a gut laughing. The bit is charming enough, and I’m curious if we’ll see more of them throughout the series.

The first two episodes of Monsters at Work are now available on Disney+.