We’re back for another recap of Freeform’s Motherland: Fort Salem. Raelle has been taken by the Camarilla and the Army, Willa and Scylla are desperate to find her. Meanwhile Abigail and Adil set out to track down Charvel’s killer. 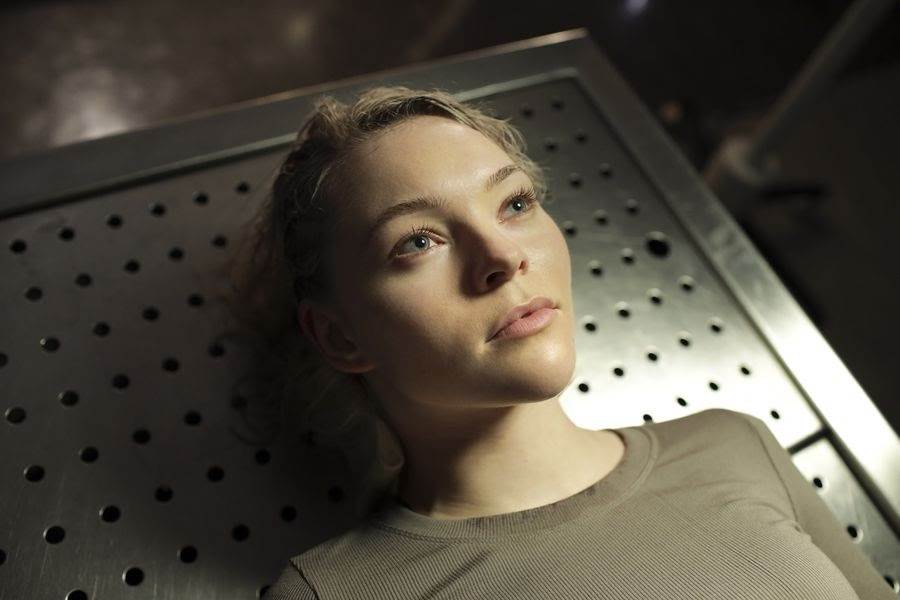 Petra walks the grounds and spots Charvel’s grave where a small tree is growing from the earth. As she goes to inspect it, Claude approaches telling her that Tally’s on the phone and Raelle has been kidnapped.

At Fort Salem, Alder and the Biddies are still on the mend, but they’re looking much better. Alder, using her own voice, thanks Anacostia for staying then asks what happened while she was out. Anacostia says that Raelle’s security detail was attacked and that the Camarilla have her. A visibly upset Alder struggles with this news.

In an unknown location, a newly awakened Raelle is strapped to a metal table. She doesn’t speak, but one of her captors, a Camarilla doctor, turns to see she’s up. He tells her he’s surprised that she’s awake considering the strong paralytic she was given. He goes on to talk about her special gift, “we’re going to have it.” He addresses medical assistants, referring to her mycelium colonized vocal chords, “there’s only one throat like that in the world.” They inject something into her neck, and she passes out.

Back at the Bellwether home, Abigail and Adil are on their mission to find Charvel’s killer. They stop by a creek and Adil picks up a smooth rock. He places it in his hand and sings a low seed. When he uncovers it, there are directional markings. He tells her in Mothertongue that it’s a blood compass and that’s how the Tarim keep track of each other. Abigail pulls out the vial of Charvel’s blood. He adds it to the stone, covers it and sings. The blood stretches out in two directions, one leading to Charvel’s grave and the other…a couple hundred miles away, but it’s where they’ll find her killer.

In Chippewa Cession, two witches talk with Tally and Edwin and thank them for their cooperation. Tally wants to continue helping, but the witches tell her to stay there, then they take off. Tally tells Edwin “we will find her.” Just then the phone rings, but it’s not Raelle as he’d hoped, it's Scylla posing as someone from War College Administration and she’s looking for Raelle. He tells her to talk to her people as they’ve been at his home all day. He hangs up. Scylla tells Willa they’re too late, Raelle is gone and she ponders what the Camarilla would want with her anyway. Willa doesn’t care about the why, she wants to know where she is. Scylla says she knows who they can ask.

Alder is ready to get up and tend to more pressing matters, but Anacostia won’t let her leave the Warding Circle. She tells the General that can’t protect her or guarantee she won't be immediately attacked. Alder says she won’t sit there while one of her daughters is in the hands of the enemy. Petra comes in and tells her they’re sending for Tally and that Vice President Silver is here to meet with her about the testing facilities. Alder wants to push it off, but Petra says he’s holding firm. Alder tells Petra she’s prepared a statement, and to tell the VP she’s attending to a classified matter. 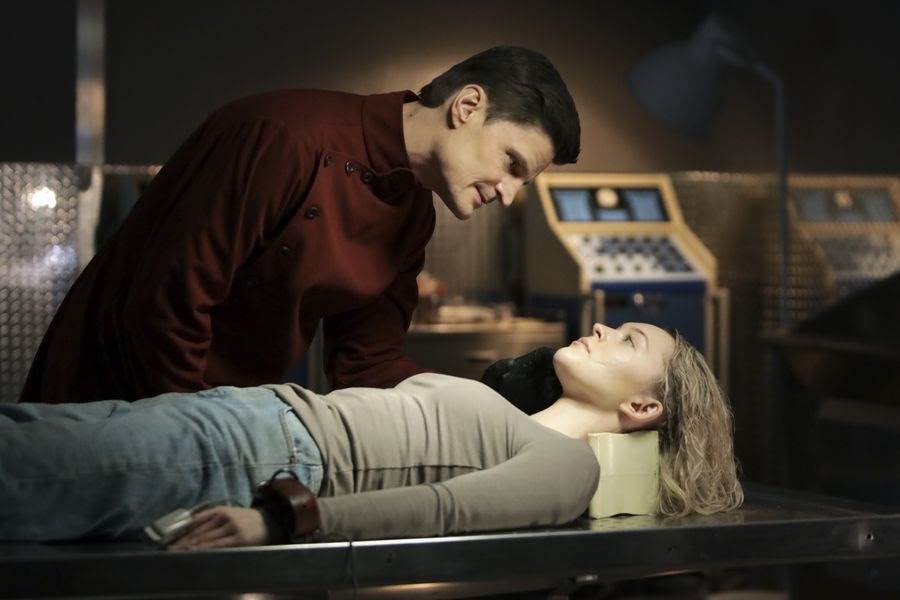 In the room where she's being held, three assistants prepare to extract Raelle’s “gift” while the doctor watches through an observation window. They make two incisions on each side of her neck and the second one knicks an artery causing Raelle to lose a lot of blood. She starts to flatline and lets out a slow breath of mycelium. It dances above her head and then attacks the three assistants knocking them to the ground. The doctor watches and says, “for the gifts and the calling of God are irrevocable.” As for Raelle, it would appear that she’s not finished just yet. Even though her body is on the table her conscience is inside the mycelium?

Raelle appears to be alone inside a living entity that’s almost forest-like in it’s appearance. She asks aloud if she’s dead, and a voice speaks to her in Mothertongue telling her it's where the dead dream. Then it says to wake up. She opens her eyes and sees the doctor who’s now wearing a gas mask and bodysuit and accompanied by new assistants. He touches her neck and comments on how he’s never seen anything that could heal itself so quickly. He also states that death is what triggers it and says to move Raelle to a clean room. As they unstrap her arms she reaches for a scalpel and cuts one of the helpers, but the doctor is too fast and injects her with a sedative.

On a back road, a cop pulls Toombs over and approaches his van. He asks the man if he knows who he is and makes eye contact with the officer. It’s him. The officer Toombs punches the real Toombs in the nose and pulls out a lighter to reveal Scylla. He recognizes her from the Halloween party and she tells him he's going to lead her and Willa to where they’ve been taking the girls.

Tally goes to see Quinn to tell her what’s happened to Raelle. Quinn is meeting with a group of dodgers and says she knows the Camarilla are back. She asks Tally to share what she knows and tells her that the Army will have the best of the best looking for Raelle. Tally asks everyone to spread the word. 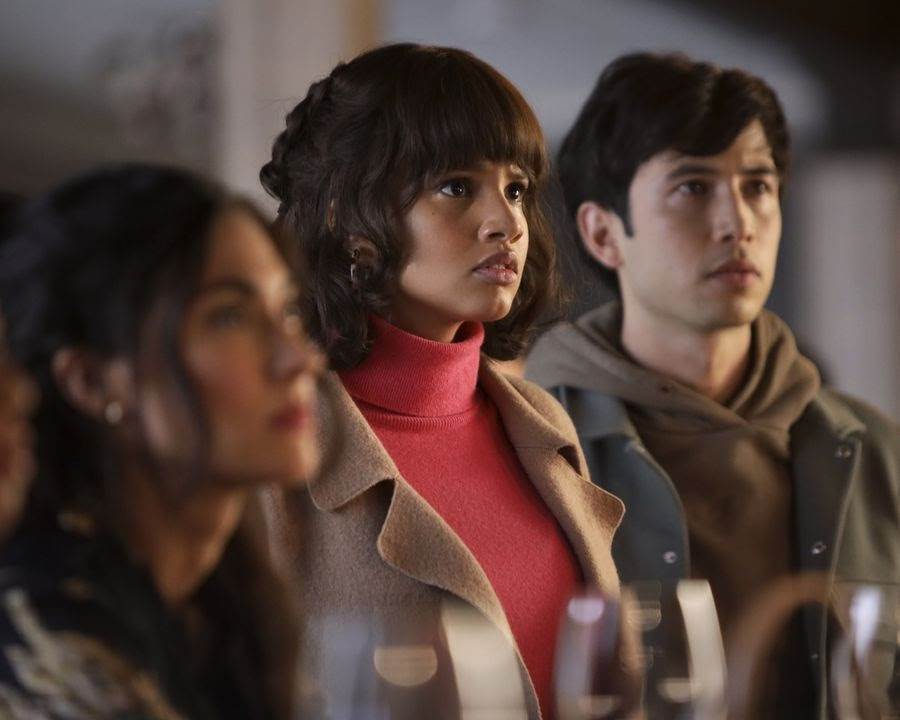 Abigail and Adil discuss their plans at a restaurant. As they’re talking Adil sees Petra and Vice President Silver on the news. Abigail gets up to watch and wonders why Alder isn’t the one speaking. A group of patrons comment on Petra and how witches raise their families, irritating Abigail to the point where she speaks up. As male guest stands toe to toe with her, egging her on. Adil pushes him away and the man strikes. Adil punches the man then he and Abigail quickly exit.

Having been moved to a new room at the lab, Raelle is further restrained and the doctor quotes scripture. A metal collar is placed over her throat and above her is a giant stone that is designed to crush her. The doctor says he knows death will trigger the mycelium but he wants to know if Raelle can control it. Just then the door opens and young girls are escorted in to watch. Raelle begs to let them go, but the doctor starts his sick toture. She looks at the girls and apologizes as she dies. Inside the mycelium, Raelle screams and asks what it wants from her. In Mothertounge it tells her that she’ll be the one to turn the tide and that while many seek power, it knows she doesn’t. Raelle wakes up and the stone is gone. The girls are fine.

Coming upon their destination, Adil shares reservations about what they’re going to do. He talks about how hitting the man at the restaurant isn’t the same as killing, but Abigail says today it has to be. She asks him not to lose his nerve because she might too and if that’s the case, they won’t survive. They observe a large abandoned looking building in the middle of nowhere, but see people milling about the grounds. Adil performs a spell to see what’s inside and the best place for them to enter. Abigail takes his hand and he transports them to the building.

Toombs delivers Willa and Scylla to the same abandoned building Abigail and Adil are about to enter. The women make their way inside and find a room with security monitors, but they can’t find Raelle.

Adil and Abigail get in just as three Camarilla come to choose a caged girl for testing. Abigail performs Work knocking the men into a hallway while Adil helps to free the girls. One of the Camarilla speaks to Abigail with Charvel’s voice and she becomes livid. She calls out a strong and destructive seed that pushes the man against a wall with a forceful wind. Her power intensifies and his flesh starts to crack and bleed until he’s dead. She retrieves his voice box and opens it to see a small part of flesh connected to wires. As her back is turned, another Camarilla makes a move to attack her. Adil stops him, causing the man’s body to bend and twist in ways it shouldn't. Abigail is surprised at his power, and so is he. She says to get the girls and leave, but he stops her saying they said something about the blonde witch who won’t die. “They have Raelle?” She heads off to find her friend.

The doctor has another test for Raelle, this time he’ll be using the Witch Plague. Willa and Scylla finally spot Raelle on the monitors and run to find her. The Plague starts to take over her body and even stays with her inside the mycelium.

Willa and Scylla watch her struggle and Willa says to tell Raelle she’s sorry. She then enters the room and begins to untie the restraints. She puts her hands on Raelle’s body and draws the plague onto herself. Raelle opens her eyes and sees her mother, then slips back into the mycelium. This time Willa joins her. Willa says she thought she’d have more time to explain, and begins telling her daughter how sorry she is about leaving her. “That was the biggest mistake of my life. I’m sorry.” Raelle starts to cry and the plague spreads over Willa. “I love you more than anything.” Willa says. “I hope one day you’ll forgive me.” Raelle sobs and begs her mom to stay.

As the plague takes over Willa’s body, Scylla and Abigail run in to grab Raelle. They make it out to the van where Adil and the girls are waiting. They drive a safe distance away and then stop. Abigail and Adil get out and she says the Camarilla will keep coming for them. Adil crouches down and touches the ground, singing a seed that’s powerful enough to demolish the building.

Tally makes it back to Fort Salem and enters the Warding Circle. Anacostia tells her Raelle is safe. Alder says the asset is in their hands, and this irritates Tally who yells at the general. Suddenly Alder and the Biddies are attacked again, with the General hoisted into the air by invisible restraints on her limbs. Anacostia runs for help and Tally watches in shock. Anacostia returns with Major Verger who says an attack shouldn't be possible in a Warding Circle. Calling back to the Dollhouse testing, Tally looks for what’s causing the attack. A red essence is coming from one of the Biddies and Tally hisses at her, sending the woman outside of the circle and ending the assault. She makes eye contact with the woman and sees Nicte’s face.

At Willa’s house Scylla sits and watches over Raelle who wakes up and is a bit disoriented. Scylla leans forward to grab her hand and tells her, “you’re safe now.”