What happens when Luz is sick and sends her friends on a mission to help her get back to the Human Realm? That’s what we discover in this week’s episode of The Owl House. 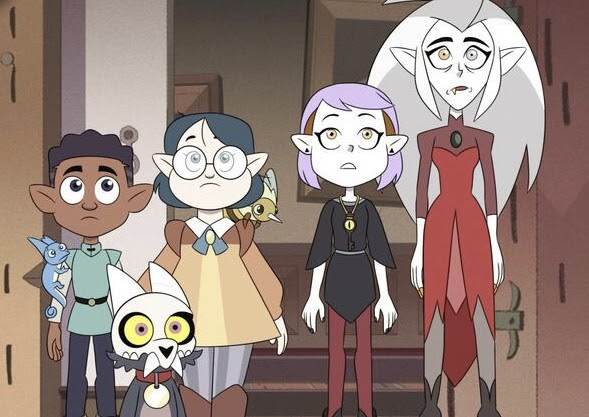 Emperor Belos has reassembled the door, but he can’t open it without the portal key that is in Luz’s possession. For the first time, we see him unmasked while Hunter (The Golden Guard) is watching from afar (Read: Spying) before he is called over and told more about the Human Realm with Belos saying that he’s been there before and tells Hunter more about it. Fearing that the Emperor is still disappointed in him for failing, the Emperor reassures him that the Titan has big plans for him, and he will be of use later. Ominous foreshadowing? Keep in mind this is what Kikimora told Rain Whispers recently as well, regarding the upcoming Day of Unity, before using his Coven mark to basically encase him in a tomb of vines.

Luz has what in the Boiling Isles would be called the “common mold” but looks more like a human flu to those of us on this side of the portal. So whatever adventures are set for us in this episode of The Owl House, it’s pretty clear from the outset that Luz might not be heavily involved.

Because Luz has a human illness, Eda and everyone else have never seen anything like it and don’t know what to do about it. The gang’s all here, Willow (who we’ve barely seen this season), Gus, and Luz’s new official girlfriend, Amity are all working with Eda, King, and Hooty to figure out how to deal with Luz’s illness.

While her illness has made her loopy, the echo Mouse springs to life and gives us more information about Philip Wittebane (who’s silhouette looks eerily like the Emperor’s) on his quest to a location called Eclipse Lake, in a hunt for a magical substance that can access the human world, called Titan’s Blood. Devotees may recall Eda’s mom mentioned this a few episodes ago.

Eda, who has been trying to figure out how to become Harpy Eda on demand, jumps at the chance to go out on an adventure, as does King, since they both have new powers to test out. Amity, not wanting to let her girlfriend down, also joins. But they are not the only ones. Kikimora, who has been tasked with finding the Titan’s blood, is also on the lookout but knows Hunter will be there soon as well to prove himself to the Emperor.

While everyone is in the mine digging to find Eclipse Lake (and the Titan’s Blood), Hunter is discovered fairly quickly not only by Kikimora but directly caught by Eda, King, and Amity who recognize him by his voice alone. While Eda and King constantly ridicule Hunter, Amity starts to feel bad about his situation. She also gets messages from Luz on a little toy the two use to stay in touch while she’s gone, but she doesn’t understand her human emojis and what she is trying to say. Hunter says that she is in the same boat that he is, pointing out that he thinks it means “bring results or else” implying if she doesn’t get the Titan’s blood, she’ll leave her.

Back at the House, the Echo Mouse springs to life again with more about Wittebane’s trip to Eclipse Lake, explaining the dangers of Fool’s Blood, saying he survived the encounter with the substance, but his companions did not. Luz tries to figure out a way to warn her friends, but Willow, Gus, and Hooty are all downstairs using headphones mixing different kinds of human sounds and music, completely oblivious to what’s going on. Luz uses her little toy to message Amity about the danger of Fool’s blood but there’s no need. Hunter somehow knew about it (perhaps from the Emperor?) and warned them. Eda and King think this is a ploy so he can keep it all to himself but are immediately thrown into a crevasse when they attempt to retrieve it.

Kikimora and her scouts hear the noise and come after Hunter and Amity, but as soon as Amity lets Hunter go, he jumps into a mine cart to beat everyone to Eclipse Lake. Kikimora captures Amity and discovers that the Golden Guard is there, just as she thought, trying to make her look bad again. She takes all the scouts, save for one, who is told to watch Amity. The guard gets bored doing so, and throws her down into a crevasse… where Eda and King are holding on to Owlbert and the staff that is wedged between two canyon walls while Eda is still trying to transform into Harpy Eda. King advised her to maybe just talk to the beast side of her and see if that's the true trigger. Owlbert is starting to break thanks to all the weight and time is running out so she does, and ends up making a deal (which we learn later is eating numerous creatures on the way home) and finally turns into Harpy Eda.

Together, they all are able to escape the crevasse and fly towards Eclipse Lake and discover the entire group has been nearly decimated by the Fool’s blood. One of the captains tries to stop Eda, who stays behind to fight while Amity and King head to Eclipse Lake. There, the two find Hunter frantically digging into the ground.

When Amity asks why, he says there isn’t any Titan’s blood left, so now he might as well dig his own grave since he can’t return to the Emperor empty handed again. He asks for sympathy from Amity since Luz obviously thinks the same for her, based on the symbols she keeps sending her. King actually takes a look and turns the toy on its side revealing the true messages, saying “U R RAD” and warnings about the Fool’s Blood and other positive notes of affection. Amity had no reason to be worried.

While she’s talking with Hunter, he spots Luz’s portal key around her neck and charges her. Amity defends herself and King as best she can, with Hunter’s Palisman (who has been following him all episode) becomes his staff which he is still getting used to. The two enter into a climactic fight for the key. Hunter finally stops, saying he’s tired and Amity is strong, mentioning that she would likely escape but threatening that they know where to find her and more importantly they know where to find Luz.

Amity, realizing that he is right, squeezes the key tightly (to a point we hear a small glass breaking sound), and then hands it over to him. All Hunter says is that he appreciates it. And that he meant that.

Back at the Owl House, Luz is feeling better and everyone returns home with Eda asking Amity if she wants to tell Luz the bad news or if she should. The bad news? The empty lake, The Golden Guard, and losing the portal key. But Amity points out that might not be a problem, revealing a hand covered in Titan’s blood that she literally squeezed out of the key before handing it to Hunter, ensuring that it won’t work anyway.

As the episode ends we see Hunter and a mostly empty (and still dripping) portal key, realizing it’s broken when his Palisman shows up again and for the first time, the magic-less Hunter says he thinks he’s finally understanding his faithful companion. Not quite the cliffhanger we’ve seen in the last few episodes, but definitely one that has us wondering what will be happening next.