When Disney fans hear the date “October 1st,” the first thing they think of is the opening of Walt Disney World. While that won’t change, they may also associate the date with the premiere of Disney Television Animation’s The Ghost and Molly McGee. For, if there is any justice in the world, the show will join DuckTales, Phineas & Ferb, and Gravity Falls as one of the best series Disney has ever produced. On the surface, the show may sound unappealing. The concept is that an exuberant girl is cursed by a ghost. The ghost then discovers the girl is overjoyed to be with the ghost, and the ghost is stuck with the girl. So you may think you have two unappealing characters that will annoy each other and the viewer. That could not be further from the truth.

The ghost, Scratch, and the girl, Molly McGee are instantly likeable. The creative team struck the perfect balance of having cartoon exaggerations, while not pushing them so far that they are annoying. Credit also goes to the stellar voice cast which includes Dana Snyder (Scratch) and Ashly Burch. They strike the same balance, which is a testament to their craftsmanship as voice actors.

Speaking of the voice talent, the series continues Disney’s legacy of song with a diverse array of catchy tunes by Rob Cantor. The songs are catchy and filled with witty lyrics such as, “Like a parasitic worm, you live in my heart.” Without being a distraction from the show, the songs add even more fun. 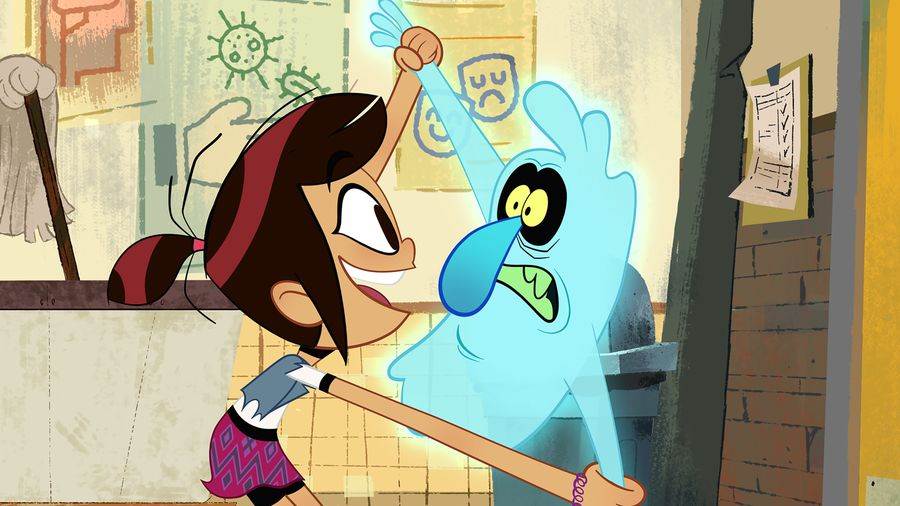 The animation is among the best on television. The characters act, the settings are numerous, and the emotion comes through. This is particularly evident with Scratch whose eternal conflict comes through. The groundwork has also been laid for a great supporting cast, but it is hard to tell how much they will be part of the show through the episodes we screened.

While the show can be zany, the series also has heart. The alchemy the creative team has used resulted in a show that balances both in a way that results in fun. In a tough year, this is a show that will bring joy to both parents and children. If I may paraphrase a wise man, “There should be an amusement enterprise where parents and children can have fun together.” The Ghost and Molly McGee is just that.

I know many folks reading this site have other plans on October 1st. But do yourself a favor, catch up on The Ghost and Molly McGee following your Walt Disney World 50th anniversary celebration through the Disney NOW app. Because much like the Magic Kingdom, the show is a source of joy and inspiration to all who watch.