Who is Echo? Get to Know the Marvel Hero Before Her Disney+ Series

The first two episodes of Marvel’s Hawkeye debuted on Disney+ this week and with it came several new characters. We were introduced to Kate Bishop, the second Hawkeye, as well as her mother, her apparent soon-to-be stepdad, some goofy mob thugs and a pizza dog. But there was one very interesting character who made an appearance at the end of the second episode. At the end of the second episode, we have both Clint Barton and Kate captured by the Tracksuit Mafia (those aforementioned goofy thugs). One of the goons heads to a room to summon their apparent boss, a woman standing in a red room surrounded by some heavy duty speakers. She dismisses the thug and the episode comes to a close with a close-up on her face.

Many of you may be confused by this ending as we have never seen this woman before, so let me try to clear things up for you. This woman is Maya Lopez. The comic book character, played here by Alaqua Cox, also eventually adopts the superhero identity of Echo and even becomes an Avenger.

Who is this mysterious new hero though? Maya Lopez is a Native American who was born deaf. Able to overcome her disability, she proved to be incredibly talented at various forms of art and eventually in hand-to-hand combat as well. Unbeknownst to her, her father worked for the notorious crime boss known as the Kingpin, before he was killed.

Looking for vengeance for her father’s death, Lopez adopted the Echo name and attacked Daredevil at the Kingpin’s order. However, she eventually learned that the Kingpin was actually the one who killed her father, which turned her from a life a crime and sent her on a very different path. 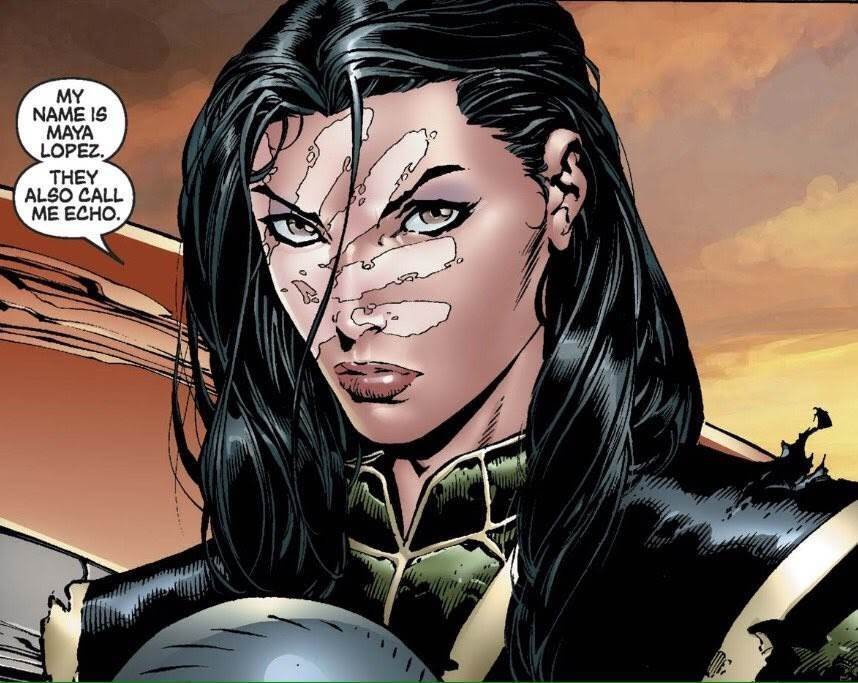 Eventually, Echo went on to wear that Ronin suit we saw in the first couple episodes of Hawkeye. She used it to infiltrate the evil ninja organization known as The Hand and assist the Avengers in a mission. She has also gone on to work with heroes Moon Knight, Luke Cage, Doctor Strange and many others. She also goes on to play big roles in stories like “Secret Invasion” and “World War Hulk.”

Currently, Echo has actually picked up another title: The Phoenix. The ultimate cosmic force in the Marvel Universe has chosen Echo as a host, which is not likely to be see something we see in the MCU, but it definitely says a lot about the character.

As for the MCU version of the character, we know we’re going to be seeing a whole lot more of her. Not only does she have a big role to play in Hawkeye, but she will also be getting her own series, as we learned on Disney+ Day. With this series possibly leading to her altercation with the Kingpin, it will certainly be very interesting to see where her own series takes us.

You can get a glimpse of Echo in the first two episodes of Marvel’s Hawkeye on Disney+ now and check out new episodes every wednesday to see more of this great character.