This year has been a plentiful one for Disney pin releases from Disney Studio Store Hollywood, Mickey’s of Glendale, D23, Disney Employee Center, and all of the Disney Parks around the world! As the year comes to a close, join us as I count down my top 10 favorite pins of 2021! This open edition collection was released at EPCOT in Walt Disney World and depicts all eleven countries of the World Showcase in brand new and unique designs that correspond with each country. While some countries have a few different designs every nation is represented in beautifully detailed pins. A personal favorite of mine from the collection is the “Brilliant” corgi pin representing the United Kingdom! 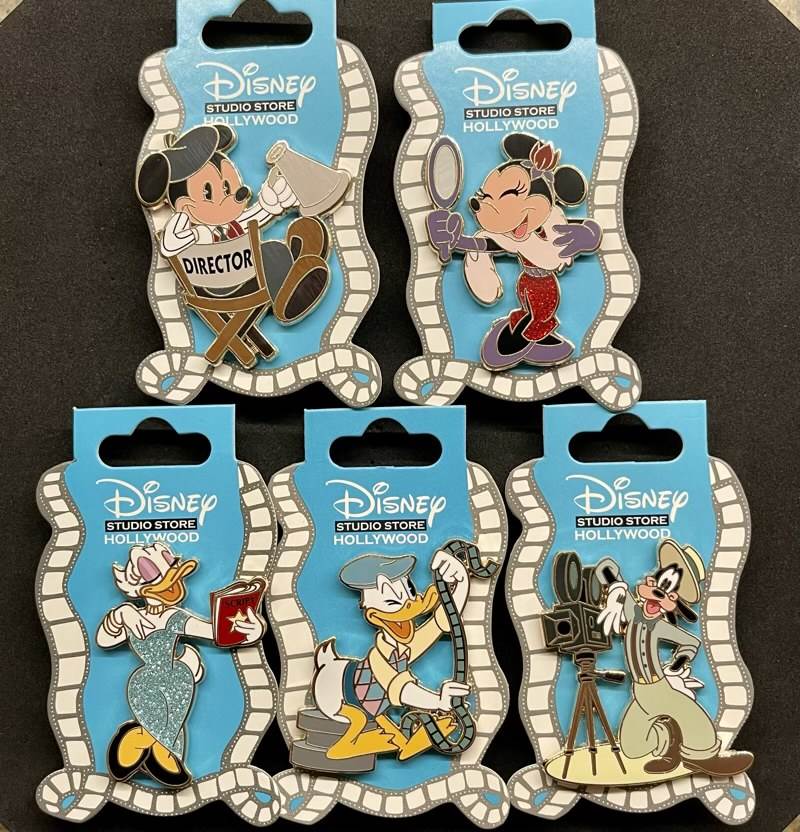 Another open edition pin collection was released this year and come from the Disney Studio Store Hollywood. These pins were released earlier this year and have a very vintage reminiscent art style to them. Each pin shows Mickey, Minnie, Daisy, Donald and Goofy are all dressed in their own Old Hollywood glam. My favorite from this set would have to be Daisy for the classy glitter enamel on Daisy’s dress. 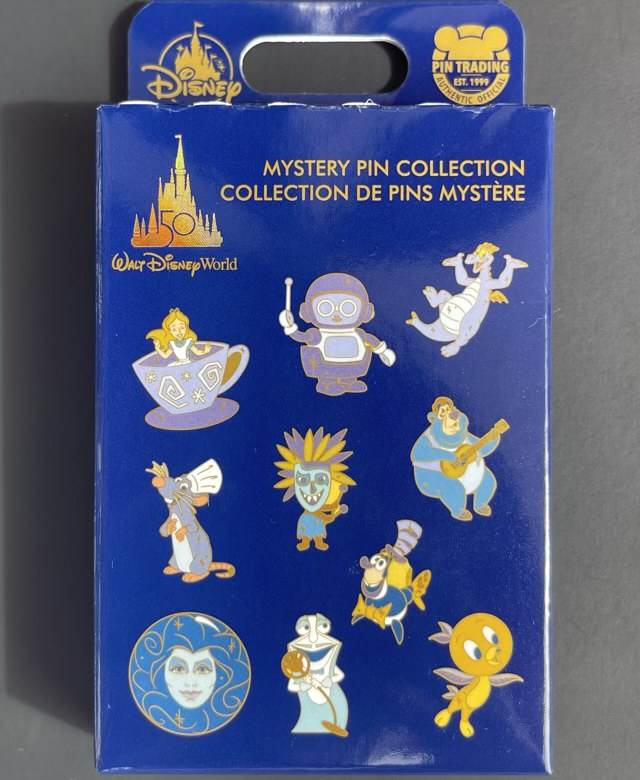 The Employee Center at Disney Studios in Burbank, California released these stunning Mother’s Day pins of some of our favorite disney characters and their moms along with a gorgeous frame that fits along with the story of each character. The pins are each a limited edition of 250. One of my favorites from this collection is the Frozen pin that depicts a younger Anna and Elsa with their mother, Queen Iduna. 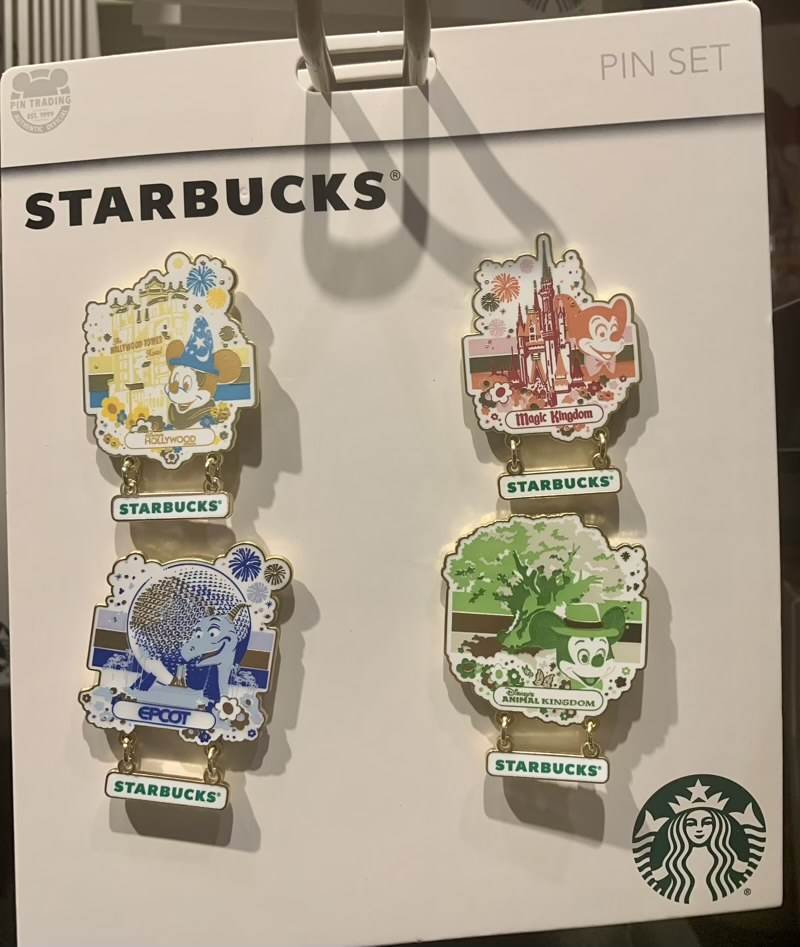 This open edition 4 pin set, also released in time for the Walt Disney World 50th Anniversary, consists of 4 different retro looking designs for each park along with the starbucks logo dangle attached to the bottom of each pin. I love the way the icons appear on the pins alongside a different style of Mickey Mouse, besides EPCOT that utilizes Figment as it’s icon. The designs were also used on travel mugs sold at the Starbucks in the parks

4. D23 Most Magical Kingdom, Vacation Kingdom of the World, Galactic Journeys, All Started by a Mouse and D23 Gold Member Welcome Gift

While the next pins are actually five separate 5 pin sets, I couldn’t help but to include all of them as one because of how cool these sets are. These D23 member exclusive pins represent stylized characters of the past and present. The pins were designed by artists Kevin Kidney and Jody Daily. 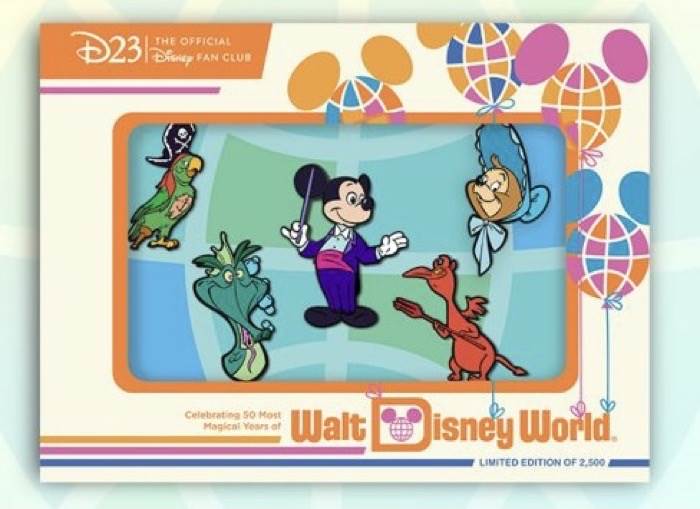 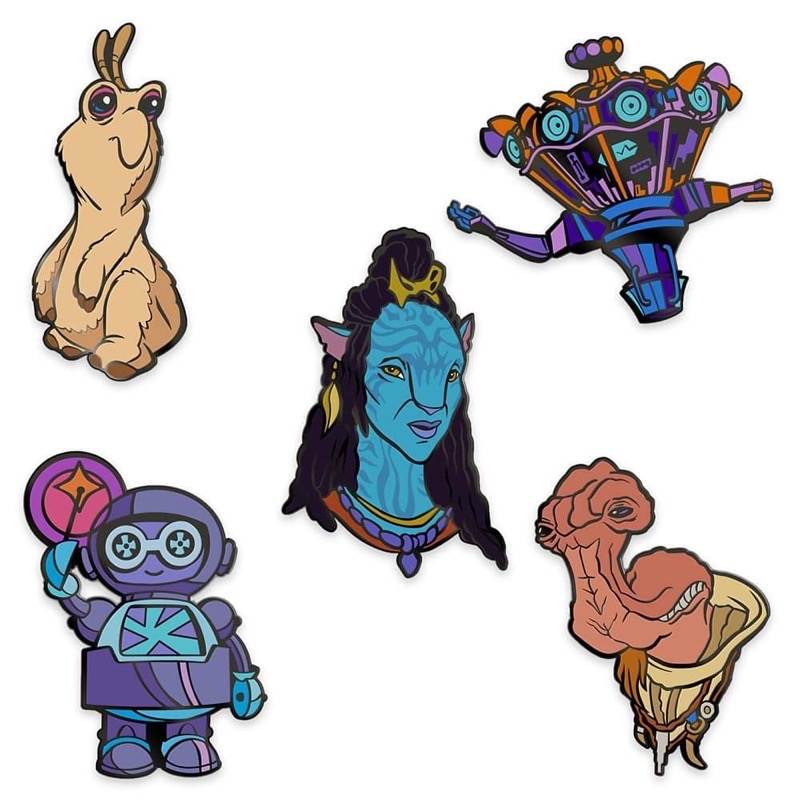 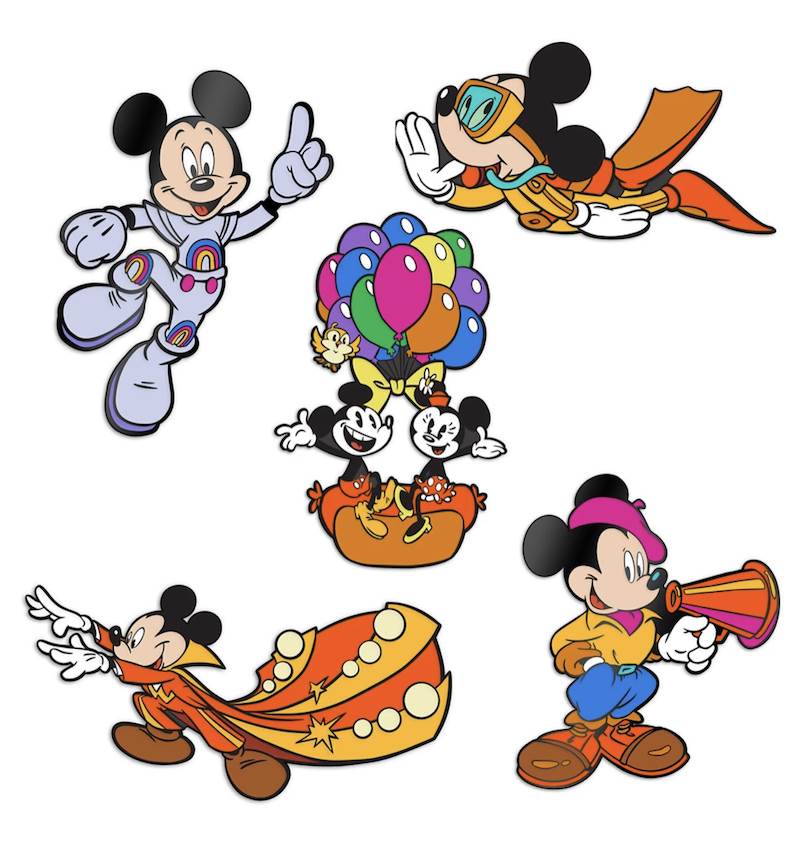 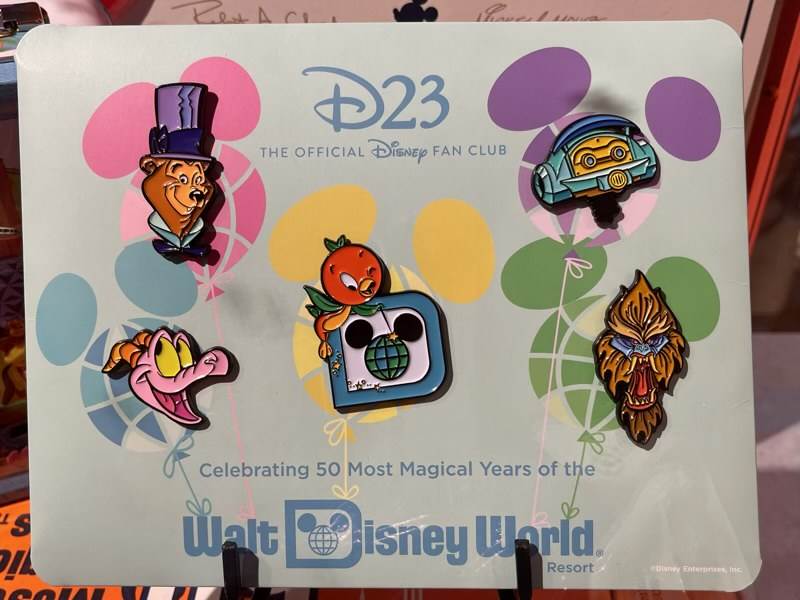 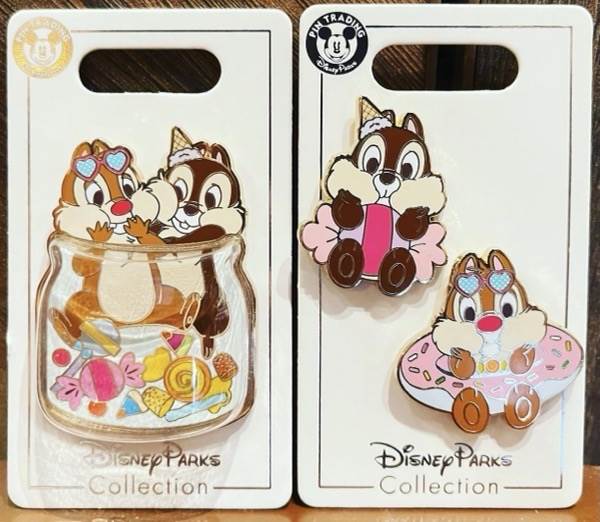 The next pins on the list come from Shanghai Disneyland. The first pin is Chip and Dale in a glass jar of sweets and treats, the pin itself has a plastic front to create the look of a 3-D jar. The second pin released simultaneously is a 2 pin set of Chip, adorned with an ice cream hat and holding a large piece of candy, and Dale with heart sunglasses sitting inside of a sprinkled donut. While several Tiny Kingdom series were released in both Disneyland and Walt Disney world, my favorite this year was the Second Edition Series 2 set. The limited release boxes came with 3 pins per box, and they’re about the size of your average Mickey head pin back that come on all Disney pins. The collection included 24 tiny pins, a few of my favorites being The Dino Institute logo from Dinosaur! In Animal Kingdom, The Imagination Pavilion from EPCOT, The Wilderness Explorers logo from UP!, a Disney Skyliner gondola, the now closed MouseGear store logo from EPCOT and the MuppetVision 3D logo from the attraction in Hollywood Studios. Last but not least, my number one favorite pins of this year were the D23 member exclusive Muppets Haunted Mansion pins that depict Kermit and the gang in their fun costumes from the Muppets Haunted Mansion Movie that premiered on Disney+ this year. The pins are a ghoulish limited edition of 999 each. Personal favorites of mine from this collection are Kermit and Miss Piggy dressed up as one another and Fozzy as the iconic Hatbox Ghost! That’s a wrap on my top 10 favorite Disney pins released in 2021, I look forward to seeing what other fun collectible pins that Disney releases in the New Year! 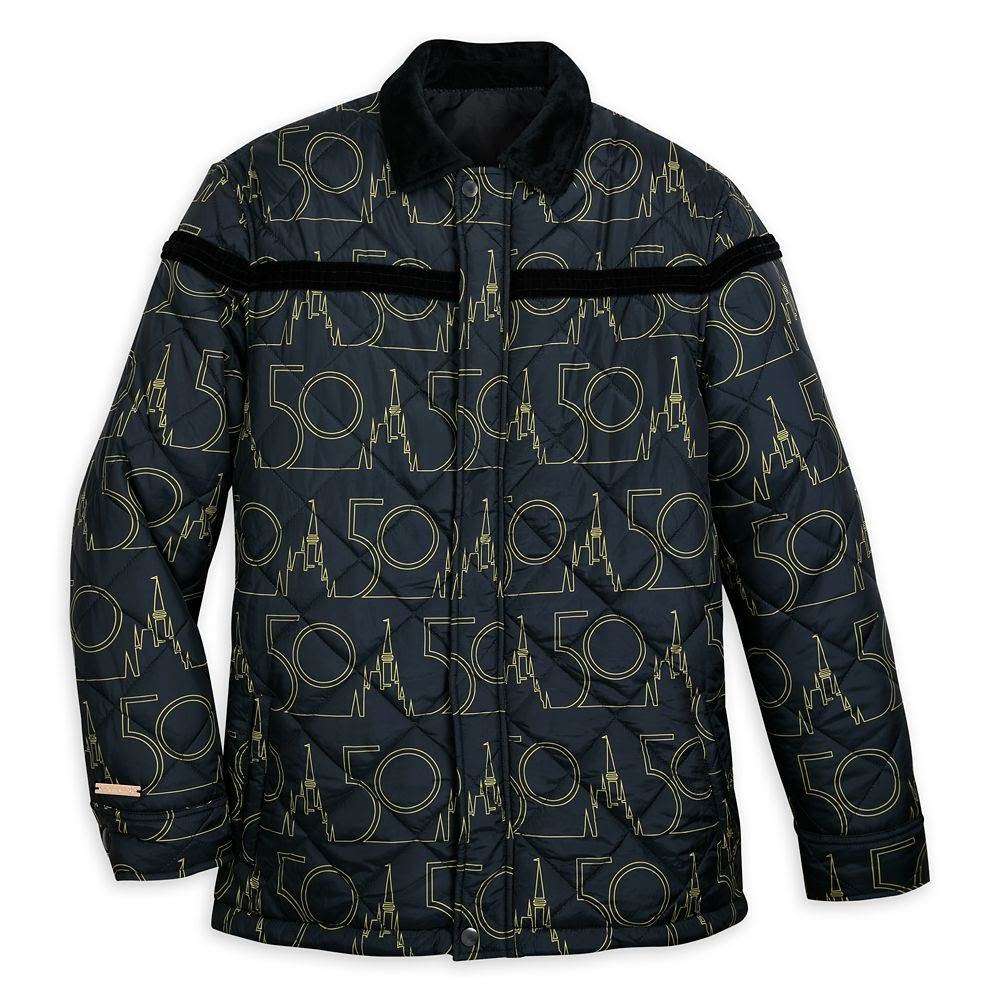