This weekend, Disneyland Paris kicked off its 30th anniversary celebration. While this event includes several new offerings, merchandise, treats, and more, one of the highlights I was personally looking forward to was the debut of Disney D-Light. This new pre-show to Disney Illuminations might not sound that exciting based on the most basic of descriptions but it gets a boost from the mention of one emerging technology: drones. Sure enough, seeing these glowing flying machines take to the sky was nothing short of magical. 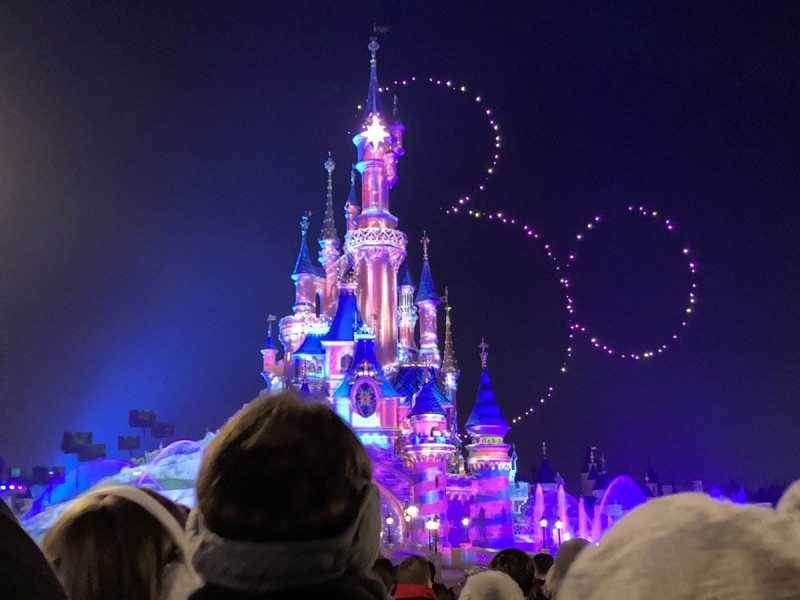 Before we get to “the moment,” let me set the stage for Disney D-Light. Like many recent Disney entertainment offerings, the pre-show mostly utilized projection mapping — in this case, utilizing the already-gorgeous Le Château de la Belle au Bois Dormant as its palette. Accompanying the imagery (which utilizes the 30th anniversary’s color scheme and other motifs) is a slower, more emotional version of the anniversary theme “Un Monde Qui S'illumine.” Fun fact: this rendition was actually recorded at the world famous Abbey Road Studios in London.

Now for the part you’ve all been waiting for. After a brief moment of near total darkness, seemingly from out of nowhere, the drones light up to reveal a giant “30” in the sky (keen observers may notice that the 30 doubles as a mickey icon). I had the chance to see Disney D-Light twice and, both times, there was an audible gasp of delight and amazement from the crowd. Then, after hanging there for a few moments — even after the lights return to normal — the drones sparkle and fade… for now.

In total, Disney D-Light runs for less than five minutes. Yet, its impact (namely that last magical moment) lasts far longer than that. Of course, for me, that makes Disney Illuminations a bit disappointing by comparison, but the show is still extremely popular among guests.

Luckily for people like me, however, Disneyland Paris has another surprise in store. After Illuminations concludes, a post-show sees the return of the drones. In fact, I’d consider this show a bit of a curtain call for the bots and a chance for them to show off what they can really do.

With a few twinkles, this time around, we get to see the drones as they make their formation. I should also note that the tone of the post-show is far different from the main Disney D-Light as it features the normal, upbeat version of “Un Monde Qui S'illumine.” After striking their 30 pose, the drones engage in some light choreography (pun intended), moving the two numbers apart and back together as well as making them appear more “3D.” Lest there be anyone in the audience not yet seeing the “hidden Mickey” in the logo, the drones also take a moment to give the castle Mouse ears, simply by tipping to the side. Finally, in what to me was the most impressive effect, the drones form a sphere with a rotating “30” in the center as if it.

On an operations note, while it’s awesome that Disneyland Paris has a surprise tag of sorts, it does make for an… interesting… crowd experience. When we watched the show on March 6th, hordes of people flooded down Main Street as Illuminations ended, leaving those who knew about the post-show to either try to push forward upstream or get out of the way. Of course, at some point, the horde reversed and a sea of cell phones returned. I presume this bit of chaos will correct itself in time as more guests get word of the full experience, but it was something to behold for sure.

Ultimately, while Disneyland Paris might not be the very first Disney Parks resort to feature a drone show (remember the Disney Springs one?), they are the first to feature the technology in the park and on a regular nightly basis. For my money, I think they made outstanding use of them, delivering guests a breathtaking and surprisingly emotional moment to celebrate the park’s 30th anniversary. Meanwhile, the post-show gives us a glimpse of what could be possible if other Disney Parks were to implement drones in a larger fashion for future entertainment. Sure, the novelty may eventually wear off but, for now, all I can say is that Disney D-Light is absolutely delightful.