As a big fan of the Marvel Cinematic Universe, it’s downright abhorrent that I hadn’t been to an Avengers Campus until today. Incidentally, that Campus was not the one in California but the brand-new one at Walt Disney Studios Park  — which will officially open on July 20th. After having a chance to preview the land this afternoon, I have a few thoughts about this much-needed addition to Disneyland Paris’s second gate.

Let me start with this: Avengers Campus is not only a major upgrade for Walt Disney Studios Park but the area is almost unrecognizable from its former self. It really wasn’t until I stood in front of Avengers Assemble: Flight Force building (formerly Rock ‘n’ Roller Coaster avec Aerosmith) and looked across to what is now Stark Factory that I finally got my bearings and recalled exactly where I was. On that note, it’s kind of amazing that this area went from having what I believe was the ugliest attraction facade in a Disney Park — more fit for a Sam Goody store than a theme park — to having one of the most visually pleasing displays. It is further enhanced with the presence of F.R.I.D.A.Y., who occasionally speaks but also communicates in moving lights and patterns upon the building. Alas, I didn’t actually ride Flight Force as the coaster is a bit above my thrill threshold. However, I’d be remiss if I didn’t note the impressive Iron Man Audio-Animatronic in the pre-show, which now has the distinction of being one of the most advanced in the resort.

From one of the attractions to the other, there’s also Spider-Man: W.E.B. Adventure. While, as I noted, I’ve never been to the Disney California Adventure Avengers Campus to ride this attraction’s counterpart, I have to believe it’s mostly a clone — especially since it includes a scene that seems remarkably similar in aesthetic to Guardians of the Galaxy – Mission: BREAKOUT! Nevertheless, I found the ride to be fun despite it not exactly being the E-Ticket many would have hoped for from a Spider-Man attraction (you know, like the one found at Universal Islands of Adventure). Meanwhile, as a silly American, I did find it funny that, although Tom Holland does reprise his role for the ride, you won’t hear his voice in this version as Spidey speaks fluent French instead.

Beyond the rides, one of things I enjoyed most about my time in Avengers Campus was that there was nearly always something cool happening. When Black Window and Black Panther weren’t fighting off Task Master, Star-Lord and Gamora were dancing to Queen. If that wasn’t happening, the Dora Milaje were marching through the land — or Thor and Loki were testing guests with Mjolnir to see if they were worthy — or any number of characters were riding through on the Avengers Deployment Vehicle. Basically, if you don’t see any superheroes around you, give it a minute. Alternatively, during our visit, guests could meet Ant-Man or the Wasp near the land’s entrance while the Training Center had even more “Heroic Encounters.” In our case, we had a chance to chat with Spider-Man and got to check out the new-multi camera “freeze frame” effect during our meeting with Captain Marvel.

As for downsides, while the main thoroughfare at Avengers Campus looks great, the intersecting street (beyond the Training Center) leaves something to be desired. While this stretch is home to two food trucks and a diner, it’s a huge letdown in theming when compared to what’s literally around the corner. Perhaps this area will look better with time and when it connects to the rest of what will be a reimagined Walt Disney Studios Park. But, for now, it’s not a whole lot better than what was there before. 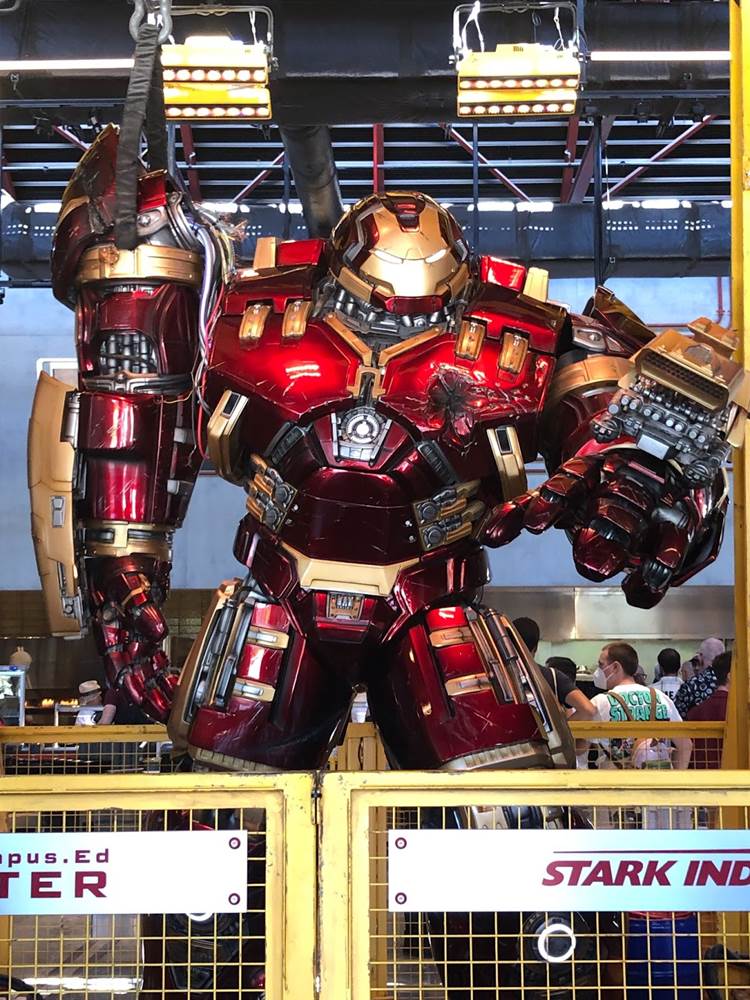 While we’re talking about food, though, I did have a chance to sample a couple of dishes from Stark Factory. Of them, the arugula and prosciutto pizza would be my pick. While the pizza itself was far from the best I’ve ever had, the prosciutto was delicious and made the dish for me. On top of that, the dessert (which was a chocolatey carmely moose type thing) was tasty, albeit with a strange-ish texture. Sadly, Pym’s Kitchen was not available to us during this preview but we hope to check out the buffet in the future.

Overall, the five hours I spent in Avengers Campus Paris made me finally see what I was missing having not been to California in some time. However, what’s interesting about the Campus concept is that, as we’ve seen at DCA, there will be plenty to miss as the characters that appear have regularly been updated as new MCU entries arrive. As a result, while I already find this area of the park to be an awesome place to hang out, I can only imagine it getting better. On that note, the addition of Avengers Campus also makes me want to spend a lot more time in Walt Disney Studios Park — which, let me tell you, hasn’t always been the case. Aside from special events and today, I think my record for consecutive time spent in that park would be 90 minutes. In other words, while it may not be perfect yet, I think Avengers Campus is a big win for Disneyland Paris and its fans.