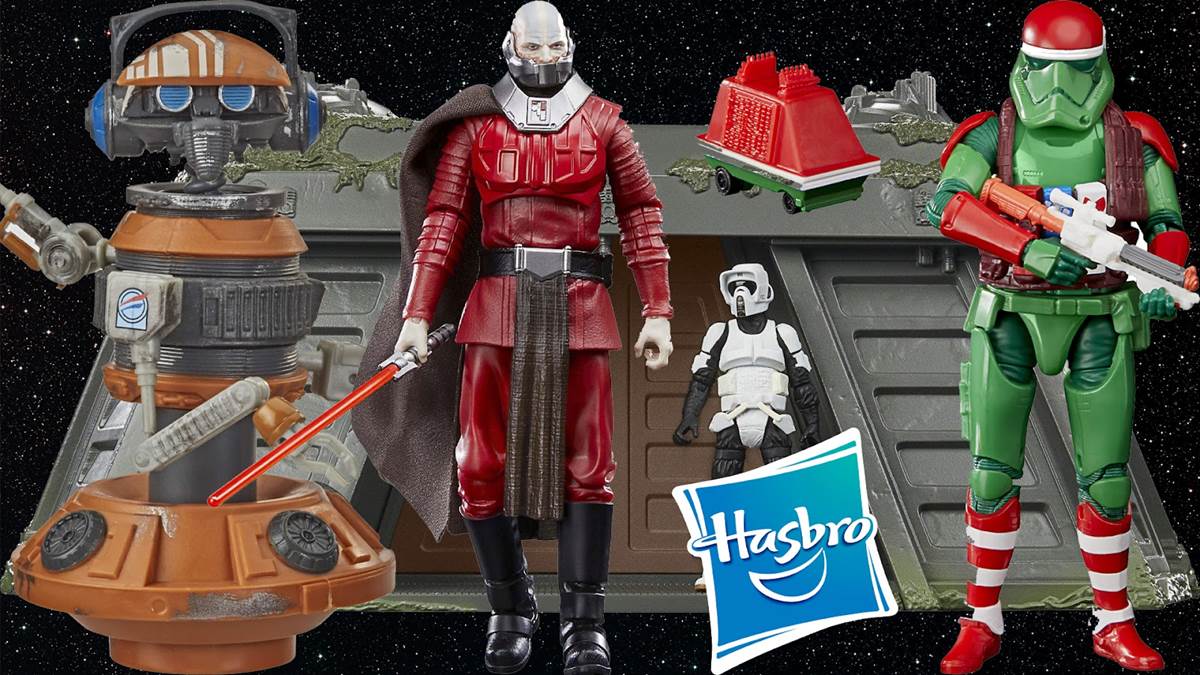 Over the years, Hasbro has proven itself as one of the most reliable licensees when it comes to Star Wars products inspired by the movies and other media set in A Galaxy Far, Far Away. And recently the company revealed a number of new action figures and other toys via Lucasfilm’s “Bring Home the Galaxy” merchandise campaign.

Today I had the wonderful opportunity to speak with Jing Houle (Global Manager, Brand Development & Marketing) and Chris Reiff (Product Design Manager) from Hasbro’s Star Wars team about the recent reveals, their working relationship with Disney Parks, holiday figure repaints, Legends characters, and Return of the Jedi’s 40th anniversary during a virtual roundtable interview. Below are the four questions I got to ask during the session and a bonus fifth I borrowed from another outlet. 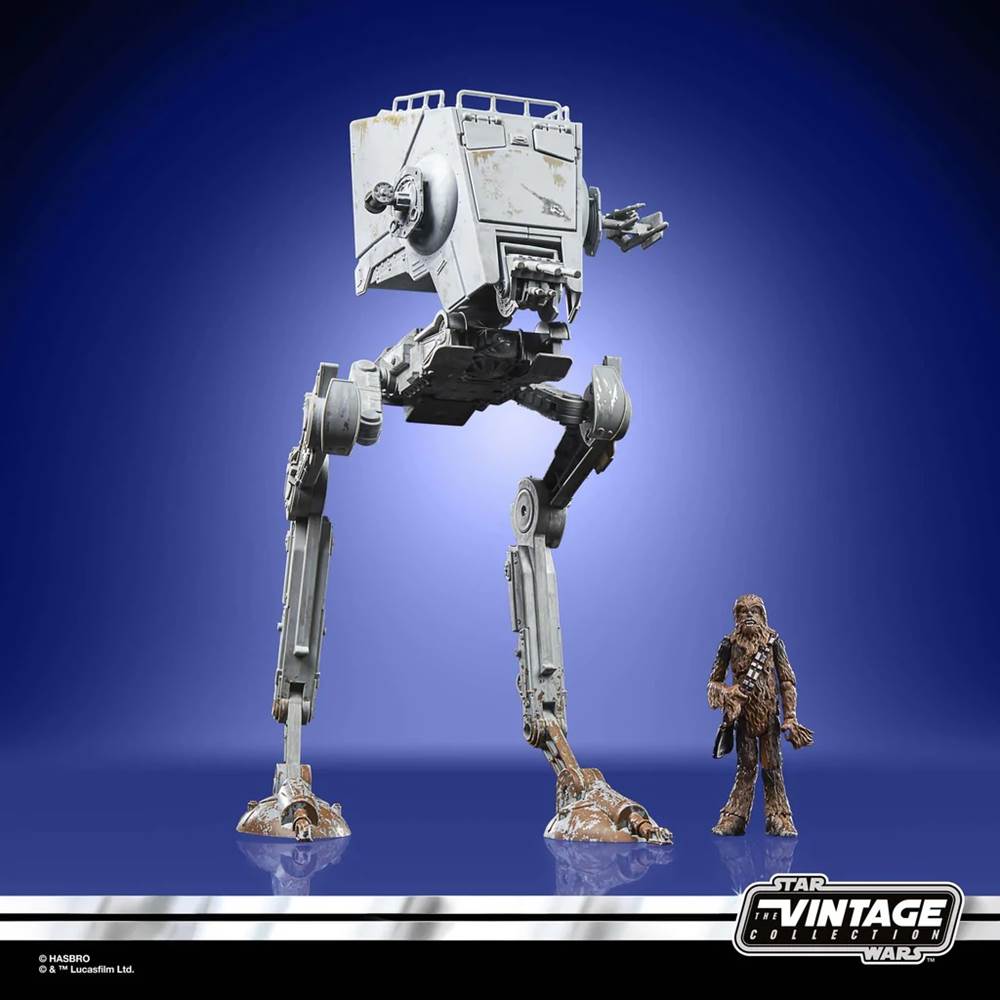 Mike Celestino, Laughing Place: Now that it’s 2023, the actual year of Return of the Jedi’s 40th anniversary, can you expand upon your plans for that celebration, including recent announcements like the Vintage Collection AT-ST with Chewbacca? What is Hasbro’s overall strategy for the Return of the Jedi line?

Chris Reiff:  The overall strategy is to get you guys a lot of amazing Return of the Jedi stuff. [laughs] The things that we’ve revealed like the [Endor] Bunker– we’ve pipeline revealed a lot of stuff, but it’s a big year, and there’s a lot more of the year coming. [There’s] stuff that we haven’t told you guys about yet… exciting news down the way a little bit. There’s big stuff: the Bunker playset and Speeder Bike and AT-ST, that stuff and characters to build out that scene. For [The Vintage Collection], that’s kind of a centerpiece to really celebrate Return of the Jedi in a fun way. But like I said, lots more coming, so no fear. You haven’t seen the end of it. Jedi is a big part of Star Wars for a lot of us, and we’re gonna do it justice. 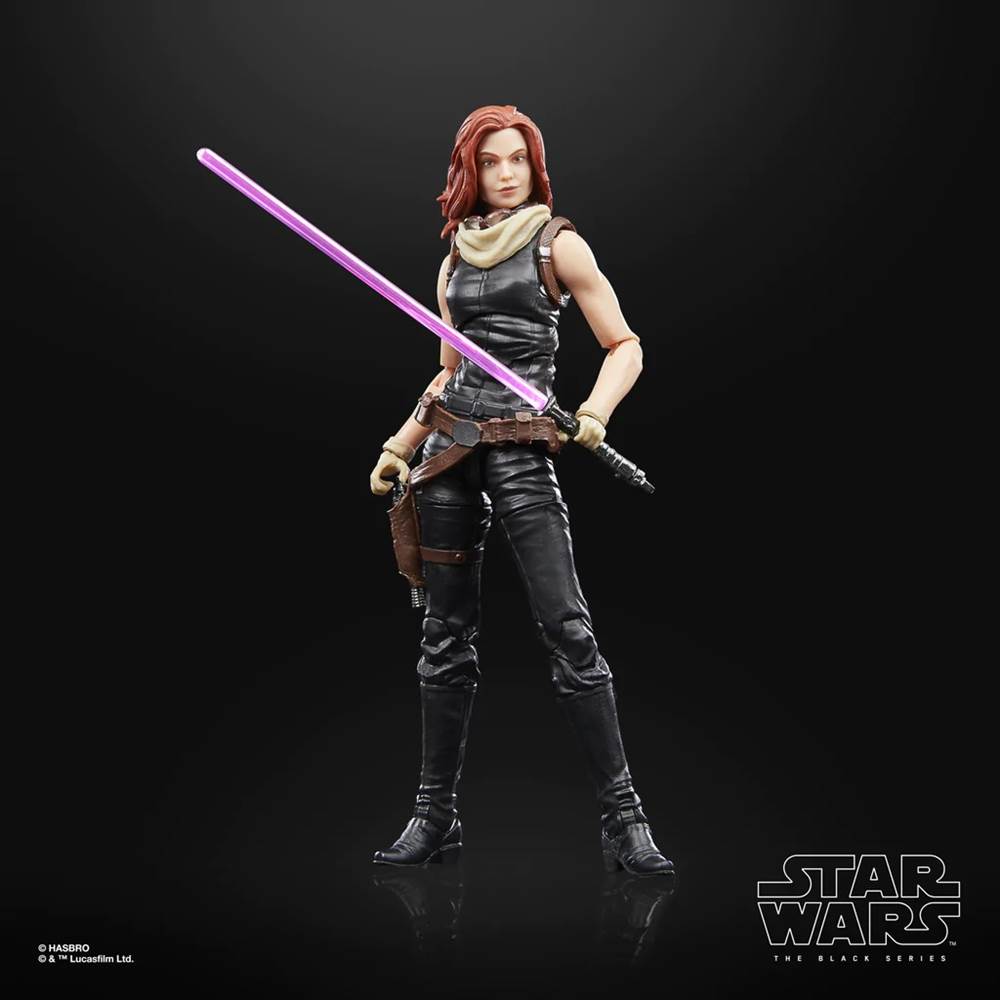 LP:  I’ve noticed a lot of recent announcements from the Legends timeline– Mara Jade, Bastila Shan, and Darth Malak are all coming to The Black Series. How has fan enthusiasm kept Hasbro returning to the Legends timeline and Lucasfilm Publishing in general?

Houle:  The fans obviously drive our business. I am not joking when [I say that] we scour the internet for your comments and your feedback, so when [fans] are enthusiastic and [they] buy figures that [they] love and [that] we put out, that tells us loads. That gives us so much information and so much data, so keep having those enthusiasms. There’s so many Star Wars fans on the team, working on [the toys]. They have their own affinities, but we love it when fans love what we think are awesome figures to put out, and it definitely drives future demand and future conversations [about] putting figures out along those lines.

Reiff:  The best thing we can do is give you guys exactly what you want. [laughs]

Houle:  Yeah, that is always the goal.

Reiff:  We are not trying to not do that. We’re trying to do exactly that. So be vocal, be clear.

Houle:  Buy what you want, let us know. That definitely is something that gives us a lot of info. That enthusiasm goes a long way. 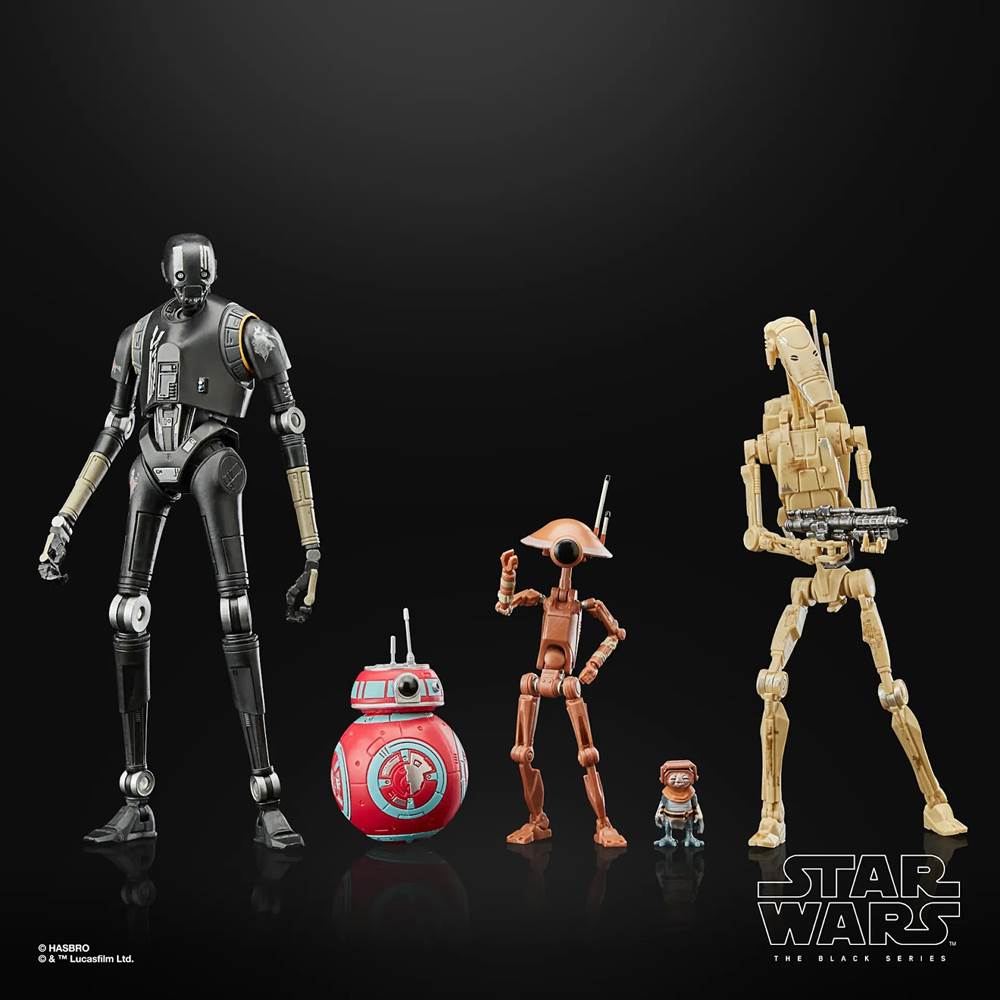 LP:  Can you talk about Hasbro’s relationship with Disney Parks? You’ve put out some great exclusives through the theme parks and shopDisney. I would love to see more of those Black Series three-packs– I’d love to see Vi Moradi and Dok-Ondar and Lieutenant Bek from Star Wars: Galaxy’s Edge– but can you tell me about that ongoing relationship?

Houle:  Absolutely. They are a partner of ours, just like a lot of the retailers. We have our meetings with them and we have our strategizing sessions, and we have our one-to-two-year forward-planning meetings as well. So for us it’s a close partnership, especially given that they are an arm of Lucasfilm and Disney. What’s great about that is just being able to talk about all of the different stuff that’s coming down the pipeline that they also have visibility to. It’s similar, in a lot of ways, to a lot of our other retailers, but it [has] the added benefit [of] having those robust conversations and meetings with them. For us, it’s continuing to make sure that we keep putting out those packs that they think are gonna be hot in the parks. We want to keep supporting that as much as possible. LP:  Out of curiosity, what has the response been to the recent holiday repaints of The Black Series Star Wars figures for the Halloween and Christmas seasons? How have those been performing?

Reiff:  They’ve been doing great. It’s fun that they’re tapping into a new group of fans– more casual fans, in a way. I think our core fans are still loving them– some go, ‘Oh, that’s not a stormtrooper’– but I think the large proportion of fans and casual fans are really loving those things. It’s a fun design exercise for the team, and just tickles all the fun buttons, I think.

Houle:  Yeah, they get to flex their creative [talents]. Eric on our team does a great job with it. He just comes up with [ideas] like, ‘I’d love to see him with a scarf’ or ‘He would be great with ears.’ [laughs] It’s great. It’s a lot of fun, and it’s a great [way] to tap into those more casual fans, as well, and those that just want a fun stocking stuffer. 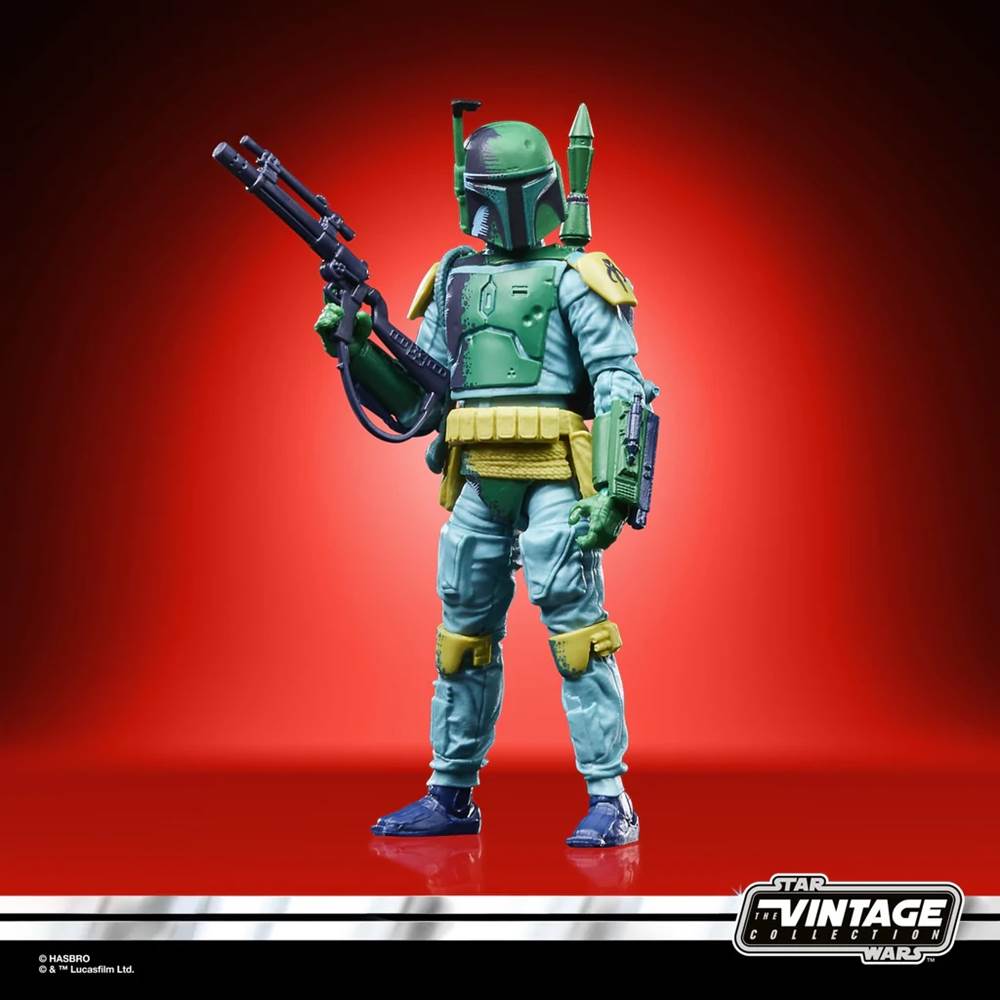 Lastly, I want to share a question one of my fellow reporters asked about the recently announced repaints of Boba Fett in comic book-inspired deco, which was something I was curious about as well.

Chelsea Coombs, Boba Fett Fan Club:  You’re doing a lot of new [Vintage Collection] repaints [of Boba Fett], especially for Target exclusives. Is there a reason behind that? I’m all for it, obviously, but I’d love to know if there are people at Hasbro who are like, ‘We love Boba Fett!’ I’m just curious about that.

Houle:  [laughs] Yes, there are people at Hasbro across all points of the team that have affinity for [certain characters]. I will say we know that there’s a limit to just rereleasing [existing figures], but there are versions of these characters that [we] have never done in [The Vintage Collection] before. The comic versions of Boba, we thought as a team, ‘That’s super cool.’ We thought that they would be great additions, to do them instead of a [standard] repack of Boba. There’s these awesome versions and colors and decos of Boba that we’ve seen in Star Wars lore, so that’s what we wanted to get out there.

Reiff:  Like Jing was saying, instead of just doing another copy of Boba Fett just like you already have, here’s a fun new expression– a new way to look at him and to celebrate some of his history. Those couple comic-book [looks], those were fun and kind of quintessential versions of him, we thought, and told a nice story about his history. 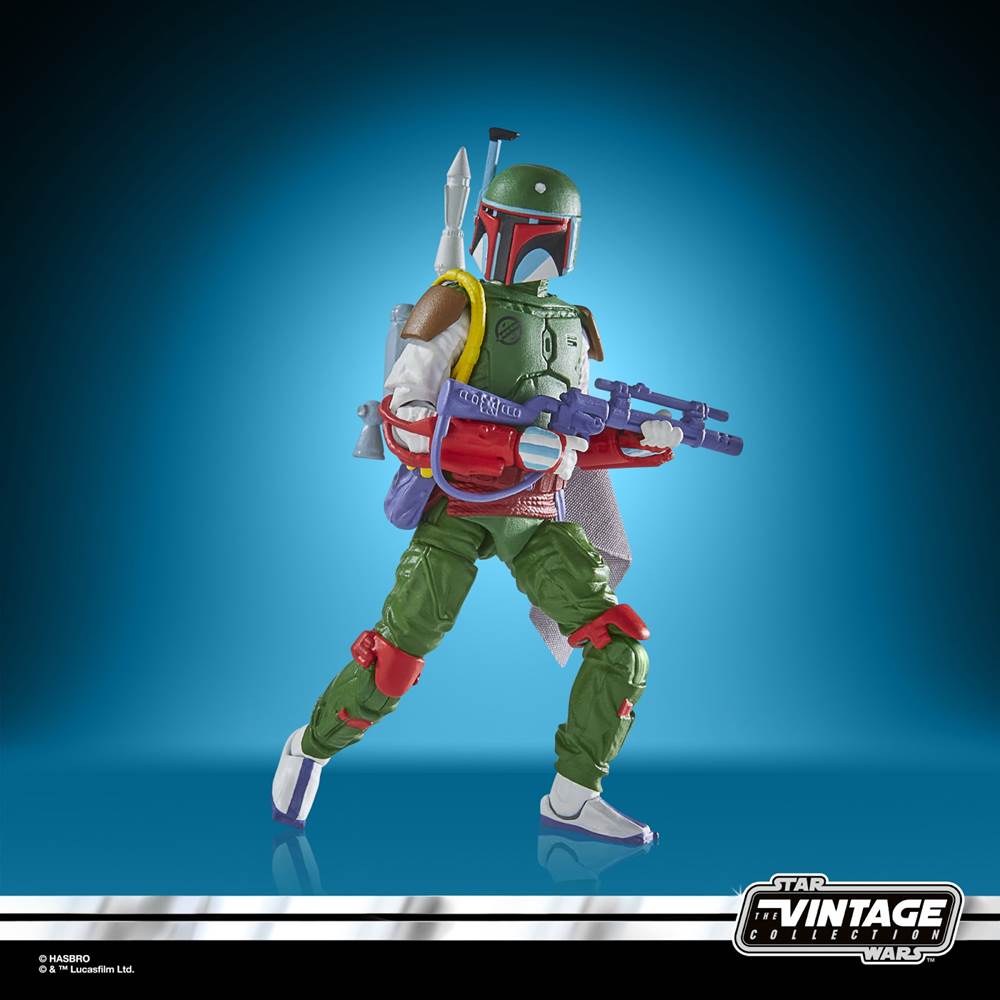 For more information on Hasbro’s Star Wars collection and to purchase toys directly from the source, be sure to visit HasbroPulse.com.