With the highly-anticipated opening of Star Wars: Rise of the Resistance literal hours away, media from around the globe have descended upon the Walt Disney World resort, so it should be no surprise that Disney has taken this time to give us some much wanted (or needed depending on your level of fandom) updates to other projects (and maybe a surprise or two) around the resort. Star Wars: Galactic Starcruiser will begin transporting guests from Walt Disney World Resort in Florida to a galaxy far, far away beginning in 2021. This is a new type of immersive vacation – a two-night, cruise-style itinerary where guests will become the hero of their own adventure in an experience that surrounds them 24/7 in Star Wars storytelling.

From the Starcruiser Terminal, guests will enter an exclusive launch pod for travel up to the Halcyon, their starcruiser in a galaxy far, far away. Through the pod’s viewports, it looks as though you are traveling through space to approach the massive ship that is much too large to land on any planet.

A “spaceport of call” to Black Spire Outpost is included in the itinerary, where special passenger transports take passengers to the planet Batuu (also known as the destination for Star Wars: Galaxy’s Edge at Disney’s Hollywood Studios). Back on Hollywood Boulevard, the Chinese Theater is getting ready to premiere it’s newest feature! Mickey and Minnie’s Runaway Railway is opening March 4, 2020. This will be the first Disney ride-through attraction featuring Mickey Mouse and Minnie Mouse, that will draw guests inside a Mickey cartoon for a fun-filled adventure where anything can happen! Not too far from the Chinese Theater, the new Mickey Shorts Theater will also open in March of 2020, making 2020 a big year for Mickey Mouse at Disney’s Hollywood Studios. As you can see from the new artist concept rendering below, the interior of the theater will evoke the same wacky fun of the Disney Channel cartoon series. Here guests will see an original short (presumably titled “Vacation Fun”) in this same style, plus have the chance to take their picture in special photo locations. Speaking of Disney Channel animated series’, Disney’s DuckTales World Showcase Adventure is coming to Epcot!  Join Scrooge McDuck, Donald, Launchpad, Webby and the nephews in search of priceless treasure. Using the Play Disney Parks mobile app, guests take a trip around World Showcase discovering exotic destinations, exciting mysteries, and maybe even a few thieves, villains and supernatural guardians of ancient artifacts. This will be the next iteration of a popular interactive scavenger hunt around World Showcase, and no official opening date has been given yet. 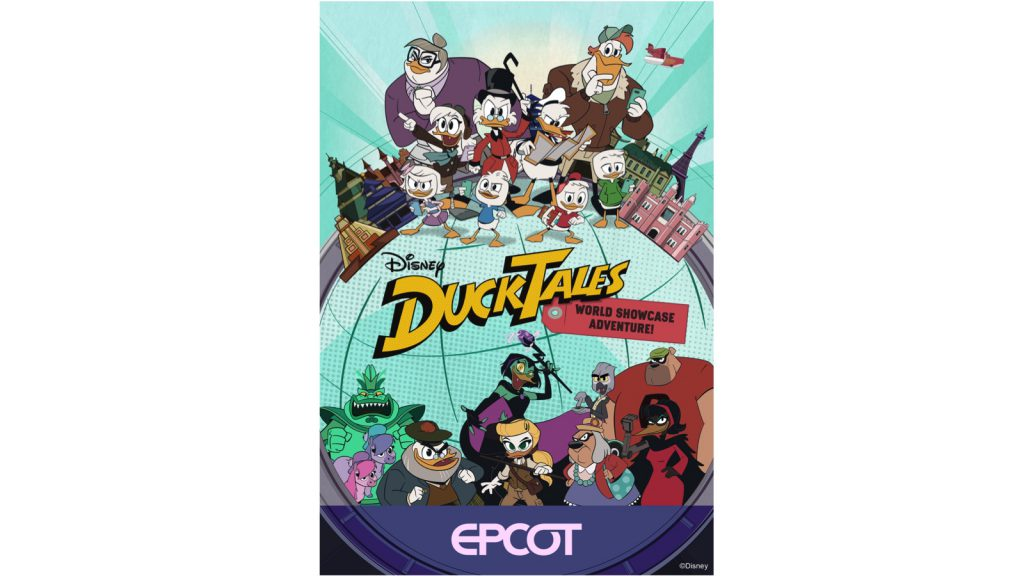 Over in the France pavilion, Remy’s Ratatouille Adventure is planned to open in summer 2020. Based on Disney and Pixar’s hit film, Ratatouille, this family-friendly attraction will invite guests to shrink down to the scale of a rat for a culinary adventure with Chef Remy, racing across Gusteau’s kitchen floor aboard special trackless ride vehicles, which you can see in the image below – just released today – as Disney Imagineers work on bringing this attraction to life. Also in the France pavilion, directed and produced by Don Hahn, producer of the animated and live-action Beauty and the Beast films, Beauty and the Beast Sing-Along invites guests to participate in a twist on a tale as old as time. It also features narration from Angela Lansbury, who played Mrs. Potts in the original film. The new sing-along will run in rotation with “Impressions de France,” which will receive an upgrade to 4K projection. The film will debut with the opening of this year’s Epcot International Festival of the Arts on January 17th, 2020. Also debuting on January 17th, 2020 with the Epcot International Festival of the Arts, “Awesome Planet” in The Land pavilion showcases the Earth’s beauty and diversity in a 10-minute film featuring spectacular imagery, in-theater effects and an original musical score from Academy Award-winning composer Steven Price. “Canada Far and Wide in Circle-Vision 360” in the Canada pavilion is an update to the previous “O Canada!” film with new scenes, a new musical score by Canadian composer Andrew Lockington and new narration (sorry Martin Short fans) by award-winning actors Catherine O’Hara and Eugene Levy. Hungry yet? Space 220 Restaurant debuts this winter!  Space 220 is a new table-service restaurant at Epcot next to Mission: SPACE. When guests enter the restaurant, they’ll step into a special space elevator that will take them 220 miles above the earth’s surface and offer incredible celestial views. They’ll feel as if they’re traveling straight up into space to dock next to the Centauri Space Station suspended just beyond the orbit of Mission: SPACE. Roundup Rodeo BBQ Restaurant coming in 2020 to Toy Story Land at Disney’s Hollywood Studios is a new table-service restaurant that invites you to a rootin’, tootin’ rodeo right in Andy’s backyard! A new artist concept image released today (below) emphasizes the theme of the new dining locale constructed from Andy’s favorite larger-than-life playsets and games. Regal Eagle Smokehouse: Craft Drafts & Barbecue is the new fast-casual restaurant opening this winter at The American Adventure in Epcot will serve classic barbecue and home-style craft brews. Guests will be greeted by the enticing aromas of barbecue coming from a large smoker located in the center of the outdoor bar and seating area. Regal Eagle Smokehouse: Craft Drafts & Barbecue will celebrate American backyard barbecue with flavors from different regions around the United States. The next few years will be particularly eventful at Walt Disney World, and we look forward to sharing all of it with you! Stay tuned!