It may be Christmas in July, but there’s nothing like the real thing and Disney has been releasing some of their Holiday 2021 plans today in celebration of the “Halfway to the Holidays” marker. Among them were a few announcements that included new ornaments from shopDisney, a new Spirit Jersey collection, new Pandora charms, and a summertime event called “Disney’s Nightmare Before Christmas Halloween Town Beach Club.” 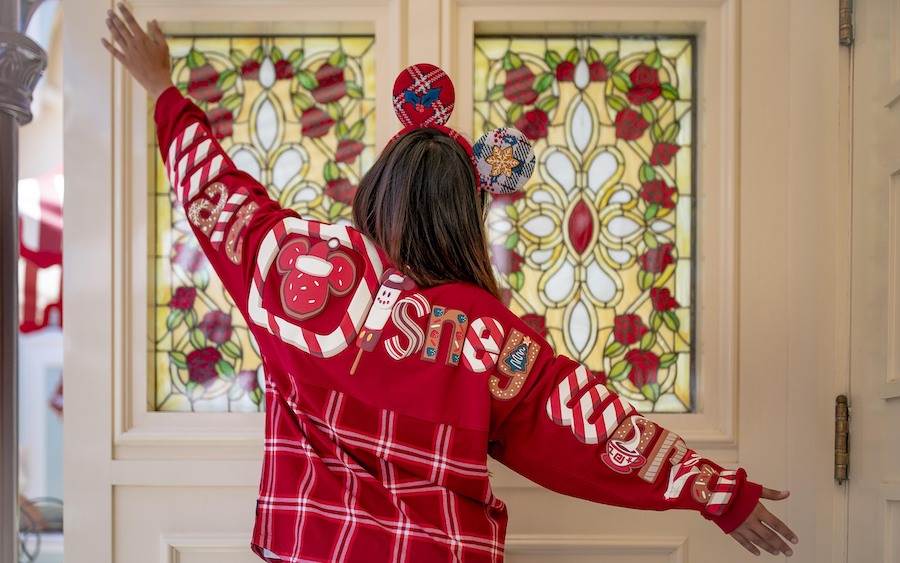 This year’s holiday Spirit Jersey celebrates the sweetness of the season with a red and white plaid jersey. The lettering looks like some of your favorite holiday treats including peppermint candy canes, gingerbread, sugar cookies, ribbon candy, fruitcake, hot cocoa, and a Disney Parks marshmallow treat. Yum! 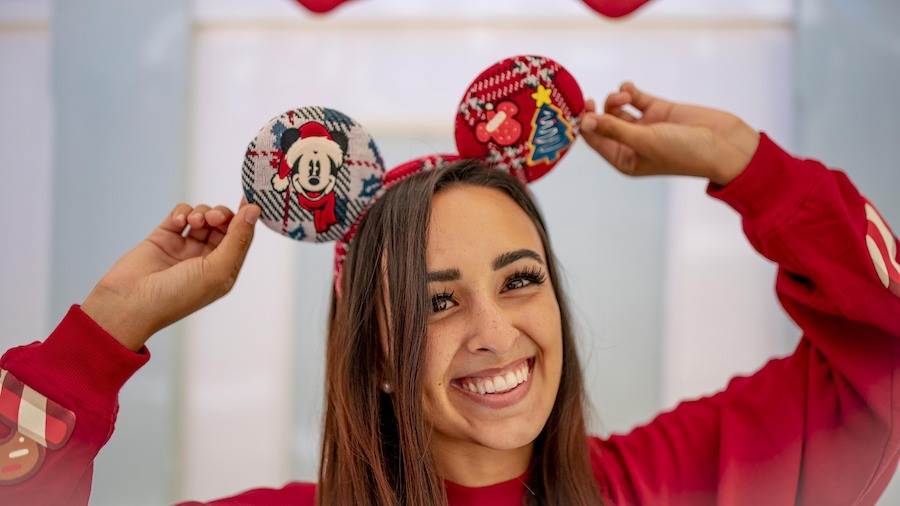 Compliment your Spirit Jersey with a pair of themed mouse ears, which include the same red and white checkered pattern in addition to a pop of green and white. Holiday Mickey has been sewn onto one of the ears, while the sweet treats theme extends to the front and back.

Both the Holiday 2021 Spirit Jersey and matching mouse ears will be released this fall at Disneyland, Walt Disney World and shopDisney. 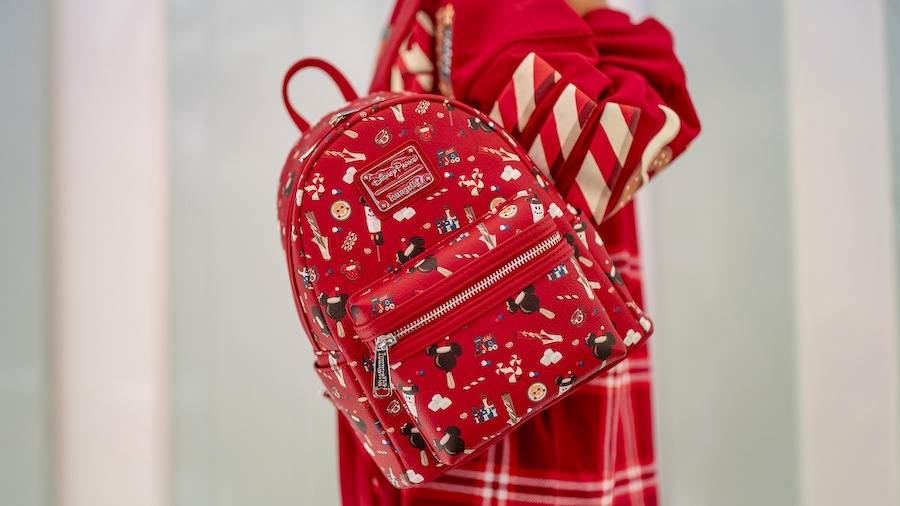 Whether you’re pairing this delectable mini backpack with your new Spirit Jersey and ears or just enjoying it on its own, it brings together some of the sweetest moments of holidays at Disney Parks. Sugar cookies decorated like castles, trains, and a small world clock face, Mickey Premium Bars with Santa hats, holiday churros, hot cocoa, ribbon candy, peppermints and more decorate the sweetest holiday backpack on earth.

The Holiday 2021 Loungefly mini backpack will be released this fall at Disneyland, Walt Disney World and shopDisney. Pandora wishes you “Happy Holly Days” with three new charms. A dangle is decorated with a holly wreath around that phrase, where some of the berries create Hidden Mickeys. Looking for charms that are a little more obvious? Santa Mickey and Santa Minnie are also coming. And in case you didn’t notice, the colors of these charms pair perfectly with the items above.

The Holiday 2021 Pandora charms will be released this fall at Disneyland, Walt Disney World and shopDisney. 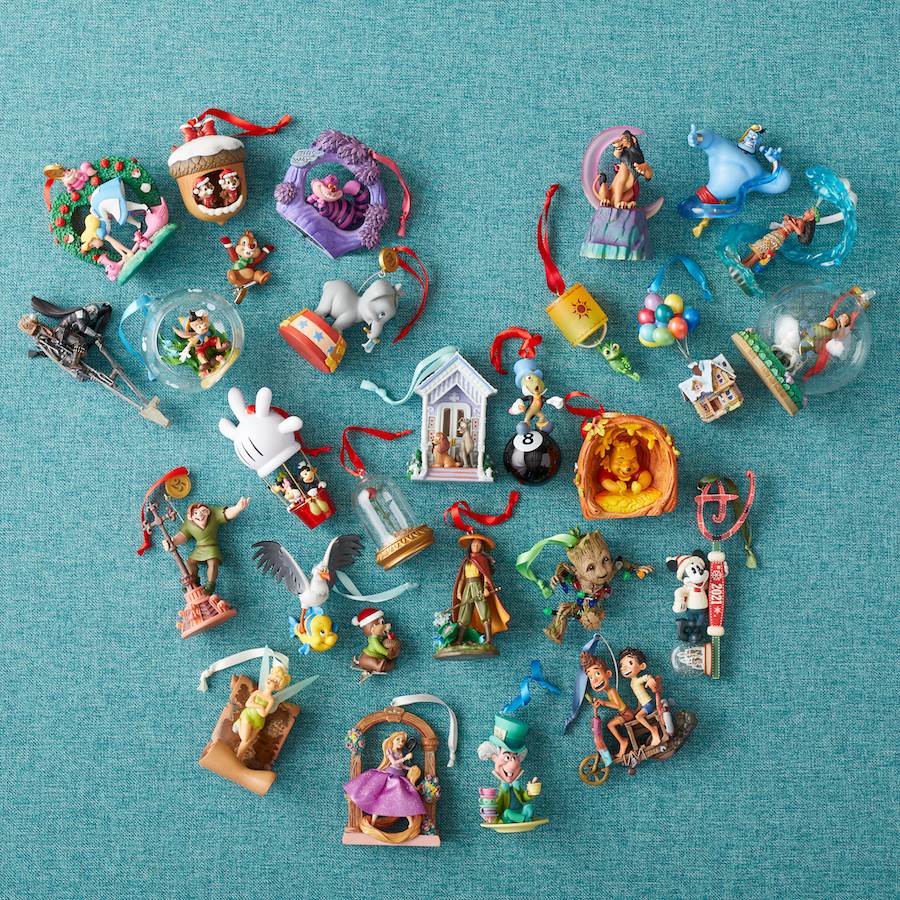 Hallmark recently announced their 2021 holiday ornament collections and while shopDisney hasn’t put out a comprehensive list yet, images released from Disney Parks Blog give us a hint at what’s to come. In addition to celebrating milestone anniversaries of films like Dumbo, Alice in Wonderland, 101 Dalmatians, The Many Adventures of Winnie the Pooh, and The Hunchback of Notre Dame, we’re also getting ornaments based on recent hits. Luca and Alberto ride their handmade Vespa from the new Pixar film, while Raya is posed for an adventure in Kumandra. Stay tuned for more ornament announcements from shopDisney.

What’s this? Last summer, Box Lunch debuted a collection of summer attire where residents of Halloween Town went on a summer vacation. It appears that concept is coming to Disney Parks in the form of an event called “Disney’s Nightmare Before Christmas Halloween Town Beach Club.” The Disney Parks Blog teased the event in the same post where they announced some of these new merchandise collections. Here’s what they said:

Speaking of Tim Burton’s The Nightmare Before Christmas… we all know Jack Skellington for his merry misadventures during Halloween and Christmas, but even The Pumpkin King needs a holiday every once in a while. This July, Jack is headed on summer vacay — and you’re invited to join in on the frightfully fun festivities.

Since it’s already July 12th, we hope they’re ready to announce this experience any minute now. The post doesn’t specify if this is going to be at both Disneyland and Walt Disney World, or if it’s just for one of the two resorts. Rumors are already flying around, with the event’s title suggesting that this would be located at Disney’s Beach Club Resort, although it sounds more plausible that it would be held at Disney’s Blizzard Beach water park where more Guests could enjoy it (the pools at Disney’s Beach Club are reserved exclusively for Guests staying there and at Disney’s Yacht Club).

Which of the new Disney Parks holiday items are you most excited about? 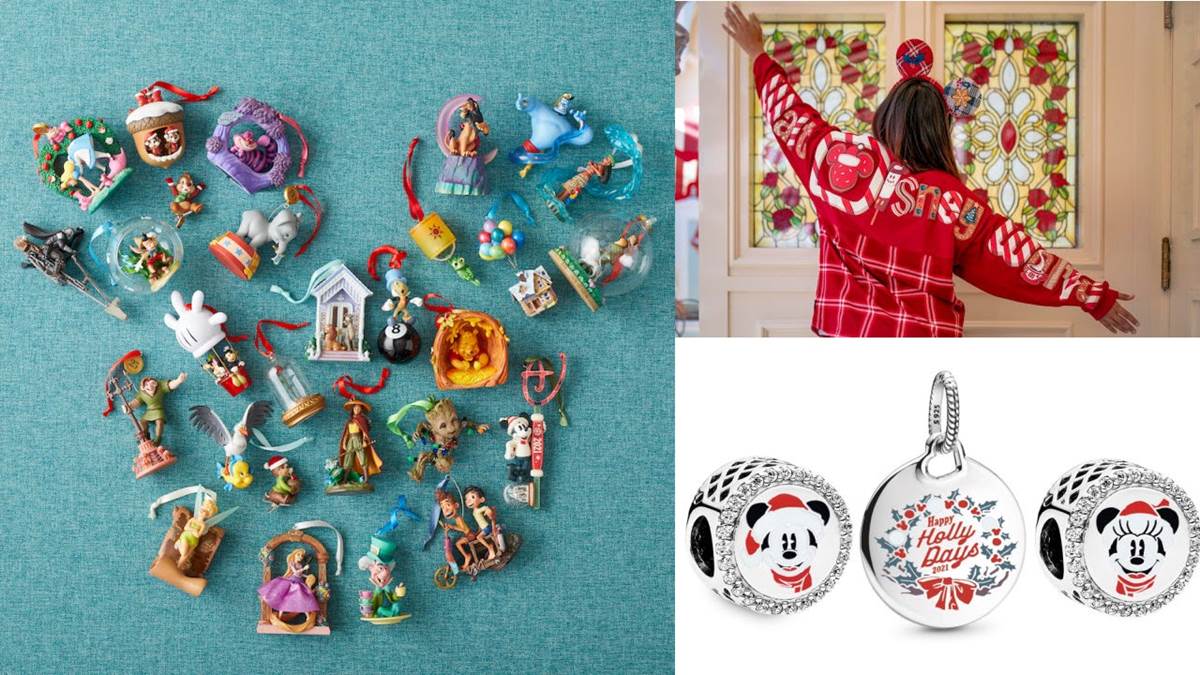