Everything Coming to Hulu in December 2021

Hulu has revealed all of their December 2021 new additions including new exclusives, new and returning fall TV shows, plus tons of exclusive content you’ll only find on Hulu. Here’s everything coming to Hulu next month. 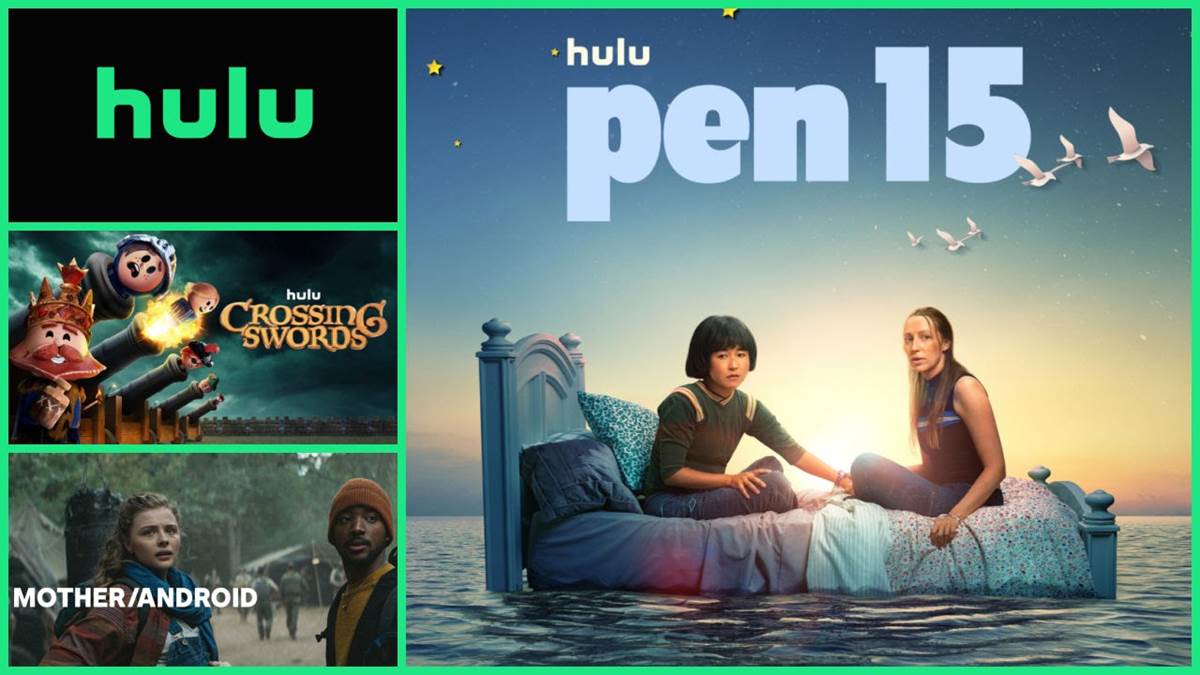 “The challenge – create a life-size house made of …CANDY!  Watch as Candy Queen Jackie Sorkin and her team of candy artists design, glue, melt and shape hundreds of thousands of sweet pieces to build a fantasy come to life….just in time for the holidays.”

“Pen15 is an R-rated ‘traumedy’ set in middle school as it really happened in the year 2000. Anna Konkle and Maya Erskine play versions of themselves as thirteen-year-old outcasts, surrounded by actual thirteen-year-olds. In this world, seventh grade never ends and the pains of growing up are inevitable.”

“Another ten episodes of bingeable mayhem, representing the next chapter in the adventures of Patrick the long-suffering squire (Nicholas Hoult) as he climbs the ladder of knighthood in the service of the volatile King Merriman (Luke Evans). There are new friends to make, new enemies to vanquish, and new horrors to scar Patrick for life; including bloodthirsty leprechauns, an island of killer monkeys, and a shadowy villain who could destroy everything Patrick has ever known! From creators John Harvatine IV and Tom Root, and Stoopid Buddy Stoodios, the producers of Robot Chicken and Marvel’s M.O.D.O.K.!”

“In a ground-breaking new spin on the true-crime genre, the documentary film DEAD ASLEEP produced in association with Sky Crime, flips the traditional thriller narrative to explore a deeper and more troubling mystery – did a remorseful Randy Herman Jr. really commit a brutal murder in his sleep, or was it a convenient cover story? Pulse Films has secured exclusive access to Herman and his family, the defense and prosecution attorneys, journalists who covered the case, forensic psychiatrists and world experts in violent parasomnia (sleep-walking) to give viewers an inside look at the shocking twists and turns of the controversial crime.”

“Set in the near future, MOTHER/ANDROID follows Georgia (Chloe Grace Moretz) and her boyfriend Sam (Algee Smith) through their treacherous journey of escape as their country is caught in an unexpected war with artificial intelligence. Days away from the arrival of their first child, they must face No Man’s Land – a stronghold of the android uprising, in hopes of reaching safety before giving birth.”

“Set 1,300 years after the events of HOW TO TRAIN YOUR DRAGON, dragons are now just a legend to the modern world. When a geological anomaly opens up an immense, miles-deep fissure in the Earth’s surface, scientists from all over the world gather at a new research facility to study the mysterious phenomenon. Soon a group of misfit kids, brought to the site by their parents, uncover the truth about dragons and where they’ve been hiding — a secret they must keep to themselves to protect what they’ve discovered.”

“The residents of Letterkenny belong to one of three groups: the Hicks, the Skids, and the Hockey Players, who are constantly feuding with each other over seemingly trivial matters that often end with someone getting their ass kicked.  In season 10, McMurray and Wayne do some dickering, the Hicks attend a sausage party, the Hockey Players and Skids have a video game battle, the men of Letterkenny receive head to toe physicals…and that’s just for starters, buddy.”

“The record-breaking 15th season of It’s Always Sunny in Philadelphia is its most ambitious yet. In the seismic wake of Covid-19 and all things 2020, The Gang stands at a crossroads in this strange new world. The rules are changing quicker than anyone can keep up with, despite herculean efforts from Mac (Rob McElhenney), Charlie (Charlie Day), Dennis (Glenn Howerton), Dee (Kaitlin Olson) and Frank (Danny DeVito) to continue business as usual. Now, they must face the music and decide who they’ll become in the cultural upheaval that is 2021. Across the span of eight episodes — and the Atlantic Ocean — we find them answer in a way only they could think to.”

“Inspired by actual persons and events, Godfather of Harlem reimagines the story of infamous crime boss Bumpy Johnson (Academy Award®- winner Forest Whitaker), who in the early 1960s returned from ten years in prison to find the neighborhood he once ruled in shambles. With the streets controlled by the Italian mob, Bumpy must take on the Genovese crime family to regain control. During the brutal battle, he forms an alliance with radical preacher Malcolm X (Nigél Thatch) – catching Malcolm’s political rise in the crosshairs of social upheaval and a mob war that threatens to tear the city apart. Godfather of Harlem is a collision of the criminal underworld and the civil rights movement during one of the most tumultuous times in American history. While this story is inspired by actual events, certain characters, characterizations, incidents, locations and dialogue were fictionalized or invented for purposes of dramatization.  With respect to such fictionalization or invention, any similarity to the name or to the actual character or history of any person, living or dead, or any product or entity or actual incident is entirely for dramatic purpose and not intended to reflect on an actual character, history, product or entity.”

“Three police officers died in a shootout at a drug house in Alabama. One man was sentenced to death for the shootings, even though he was never accused of even touching the murder weapon. This is the story of Nathaniel Woods.”

“In the not too distant future, a viral plague has swept the earth. In a matter of weeks, it killed 99% of men. The 1% were sent to The Facility in New Zealand but didn't survive. Or did they? “Creamerie” picks up eight years after the near-mass-extinction.”

“SWAN SONG follows retired hairdresser and local bar performer icon Pat Pitsenbarger (Udo Kier) who has given up on life from the confines of his small-town Sandusky, Ohio nursing home. But when Pat gets word that a former client's dying wish was for him to style her final hairdo, he sets out on an epic journey across Sandusky to confront the ghosts of his past – and collect the beauty supplies necessary for the job. SWAN SONG is a comical and bittersweet journey about rediscovering oneself, and looking gorgeous while doing so. Written and directed by Todd Stephens, SWAN SONG also stars Jennifer Coolidge, Linda Evans and Michael Urie.”

New On Hulu in December