Hello and welcome to another Disneyland Resort Update! Today we’re looking at some of the new details at Pixar Pier, some shopping updates at World of Disney, the newest Meet and Greet at Disney California Adventure and so much more! Scroll down to check out what’s new at the Happiest Place on Earth! 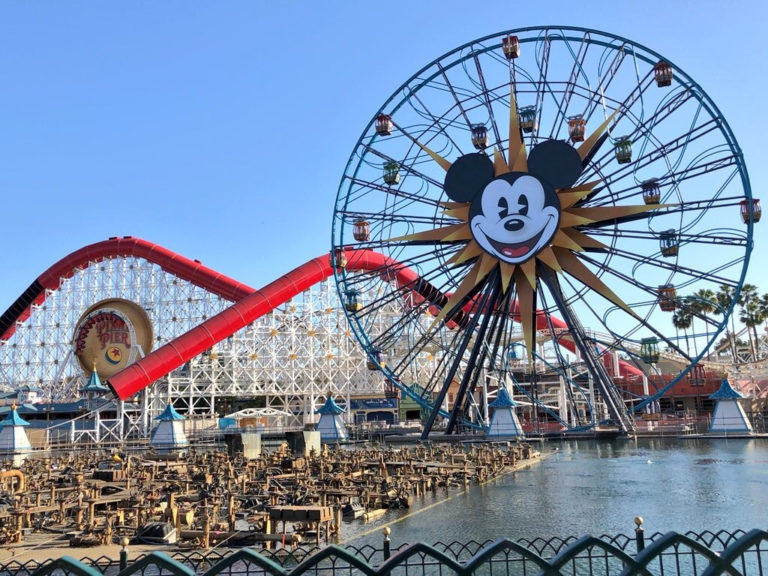 Lots of exciting things are happening at DCA! With Pixar Pier just weeks away from opening, the Imagineers and Cast Members are working hard to put the finishing touches on the updated land. And speaking of Pixar, Incredibles 2 is about to arrive in theaters on June 15th! Finally, Marvel’s Sorcerer Supreme has stopped by for a visit and will be meeting fans for limited time this summer.

Pixar Pier is finally about to open and we can’t wait. On June 23rd the transformation of Paradise Pier will be complete and we’ll get to visit four Pixar “Neighborhoods” featuring all of our favorite characters. If you can’t wait that long, Disney is offering a VIP Preview on June 22nd. As of now, Incredicoaster testing is well underway; game booths around the Pier are almost complete; the gondolas have been added to Pixar Pal-A-Round; and characters are hidden under the walkway as you enter the Pier. How many Pixar friends can you spot?

Disneyland Resort Annual Passholders are living the good life during Pixar Fest! Each week Disney is offering a special small gift to AP’s such as limited edition buttons or stickers. If you’re an AP, be sure to stop by the AP Corner at DCA to get your exclusive gifts before they’re all gone. And since Pixar Fest is celebrating friendship and beyond, Disney is encouraging AP guests to take a moment out of their day to write a special note to the person(s) that make your life special. Whether you’re sharing a memory or just saying, “thanks for being awesome,” let someone know that your world is better because they’re a part of it.

Back in May, Disney announced that guest would be able to catch a ten minute sneak peek of Incredibles 2 at DCA and Hollywood Studios (in Florida). We posted some pictures a few weeks ago from both locations, and here are a few more!

The latest Avenger to come to DCA is none other than Doctor Strange. The Sorcerer Supreme will be visiting for a limited time this summer until he’s called back to the Sanctum Sanctorum to you know, protect the world. Bonus: Thor!

Visiting Artists at Off the Page

We we’re delighted to see two amazing artists at DCA’s Off the Page. James C. Mulligan was working on this Moana and Maui picture when we stopped by. Isn’t it a great paining? Heather Theurer was also there showcasing her unique Disney inspired artworks.

Across the esplanade, Disneyland is also seeing some changes. The natural beauty in the park is always remarkable and its a constant reminder that spring is here. In other parts of the park, we’re getting ready to say goodbye to Hyperspace Mountain.

Look at all the lovely flowers surrounding the Matterhorn! We love that Disney incorporates nature throughout its parks. It’s so nice to discover beauty in unexpected places.

Hyperspace Mountain went away on Sunday, but we’re sure it will be back for more galactic adventures. For now here are a few pictures for around the attraction.

“it’s a small world” parade gate looks amazingly like the attraction. The lighting in the queue for the ride is lovely and adds a magical feel as dusk settles over the park. Don’t you wish you could visit all the time?

Disney is aways introducing fantastic new merchandise and this time they have some fantastic items from Up!, a new Mickey Mouse inspired dress, rainbow Minnie ears and more!

The Disney Dress Shop has many wonderful offerings including skirts, tops, dresses, and accessories. Now they are also selling neckties that are inspired by Disney attractions, characters, and movies. So grab your partner, friend, family member, or fellow Disney fan and find some fun matching outfits!

Well that’s it for today! Thanks for joining us for this Disneyland Resort Update. Stay tuned as we bring you more exciting news from the California Parks and Pixar Pier.