It’s here! Today, the Disney Skyliner officially opened to guests at Walt Disney World. Given this momentous event, we decided to book a room at Disney’s Art of Animation so we could get the full resort guest day one Disney Skyliner experience. So how did it go? Let’s take a look at our thoughts on this new form of resort transportation, including some of our travel times. 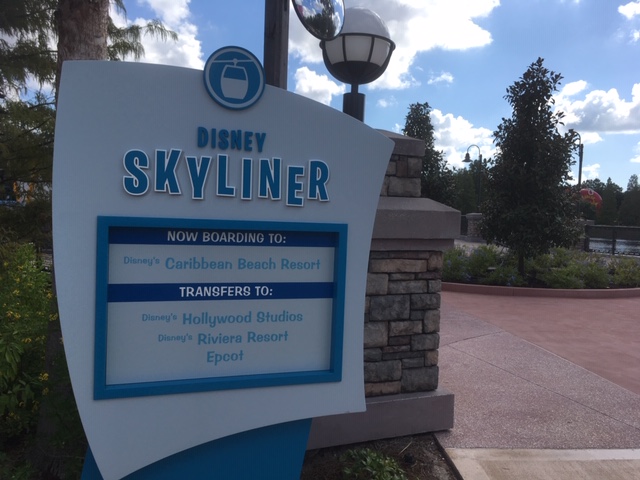 Our Day One Disney Skyliner Experience

Even before we set out to try the Disney Skyliner for ourselves this morning, we could sense the excitement from other guests at our hotel, as they were snapping up merchandise and talking with Cast Members about the new addition. Naturally, we were excited as well and have been keeping pretty close tabs on the transportation options, from announcement to development to dedication. Still, we weren’t 100% sure what to expect.

As any casual Disney fan will tell you, one of the largest concerns people had regarding the Skyliner was the lack of A/C. Yet, as others have noted, the breeze picked up in the cabin is significant and I don’t think I manufactured a drop of sweat during any of our flights. I’ve also seen some guests say that they felt slightly motion sick while onboard but, while I live in fear of such things, I can honestly say I felt 100% fine on all of my trips (although I do understand how it could cause some to feel ill — especially in the character cabins).

Speaking of the wrapped gondolas, while great-looking from the outside, they’re not enjoyable inside. I realize this isn’t a hot take as many other have observed the same thing, but it’s true. The small dots that appear thanks to the wrap not only make it difficult to see the sights but can also be a literal eyesore if you stare at them. Instead, I found myself looking out to the clear side or just down at my phone the numerous times we were in one of these vehicles. 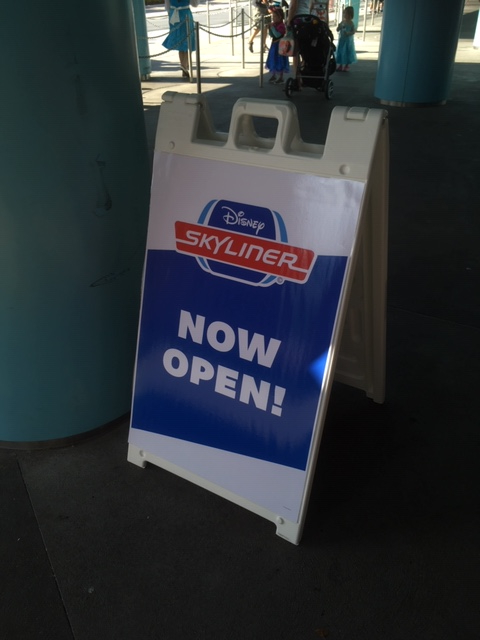 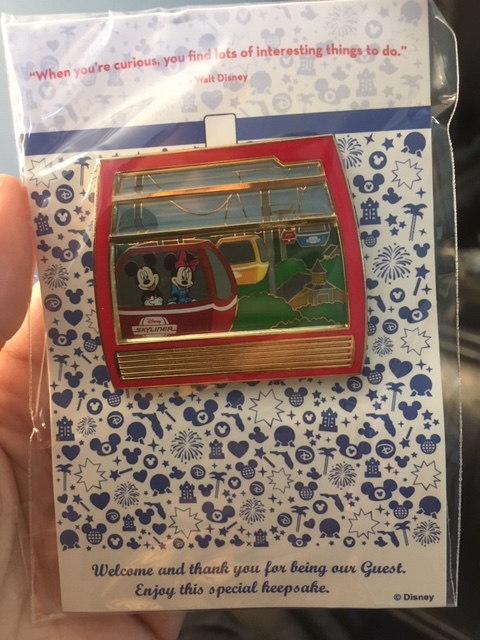 Yet another question I often heard asked before the Skyliner opened was “how many people will it seat?” Officially the answer is 10, but the most-crowded cabin we had found us joined by 7 other guests (for a total of 9). Even at near-capacity, I never felt cramped or crowded. Plus, for most of our trips, we had 6 or fewer people in our gondola at a given time, so it really just depends on the size of the groups around you when boarding.

With all that out of the way, perhaps the biggest question surrounding the Disney Skyliner involves travel times. Sure, Disney announced Point A to Point B figures months ago, but that doesn’t exactly account for queueing time and the like. Therefore, being the good little reporters that we are, we decided to take a few test flights and break down how long each part of the journey took: 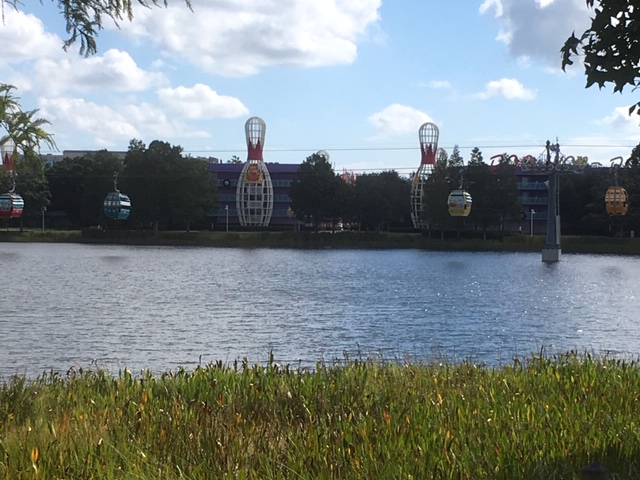 For our first voyage aboard the Disney Skyliner, we decided to keep things simple and head to one of the theme parks. The first thing that caught my attention was that there was practically no line at the shared Pop Century/Art of Animation station. Granted, it was about 10:30 a.m., so not a peak travel time, but then again it is opening day. In any case, we were able to board our gondola in less than a minute.

In order to get to Disney’s Hollywood Studios (or Epcot, for that matter) from Art of Animation, you need to transfer at Disney’s Caribbean Beach Resort. Luckily for us, this transfer was also quite quick, taking about two minutes total. Unfortunately, soon after we were airborne, our cabin came to a stop, swinging gently in the air for a little bit. However, the delay was only for a (literal) couple of minutes and we were on our way shortly.

Soon enough, we arrived at Hollywood Studios. Our total travel time from Art of Animation to the park was 15 minutes and 2 seconds — not bad! After most people arrive at a theme park, I imagine that they’d stay there for a bit — but we aren’t most people. Instead, we turned right around and got in line for the Skyliner once again. Of course, before we could do so, we needed to find the end of the line, which continued to grow. By the time we were able to claim our spot, the line was nearly to the vending machines in the bus area.

Despite the lengthy line, boarding moved quickly and we were in a gondola about 7.5 minutes later. Once again, a transfer is required at Caribbean Beach, so another line greeted us there. Just like at DHS, the line looked pretty long but took just over 7 minutes.

The thing about the Epcot line is that it does also service a station at Disney’s Riviera Resort. That said, unlike at Caribbean Beach, you don’t need to exit and transfer. Instead, guests can just remain seated and wait to take back to the sky. This whole process takes about 2 minutes. By the way, it’s unclear what will happen once Riviera actually opens but, for now, Cast Members just have any guests who do come to the station board when there is an opening.

Onward to Epcot! Another interesting aspect of this line is that it includes a turn station to send you off the correct direction. Unlike Riviera or other stations, though, the cabin doesn’t need to slow down too much and really doesn’t really add much time to your travel.

We arrived at Epcot’s International Gateway 32 minutes and 24 seconds after getting in line at Disney’s Hollywood Studios. This included a total of 15 minutes of waiting in line, but no other delays this time. Also of note, this still wasn’t what you might think of as “peak time,” although it’s hard to say how the wait times compare to the average at this point. 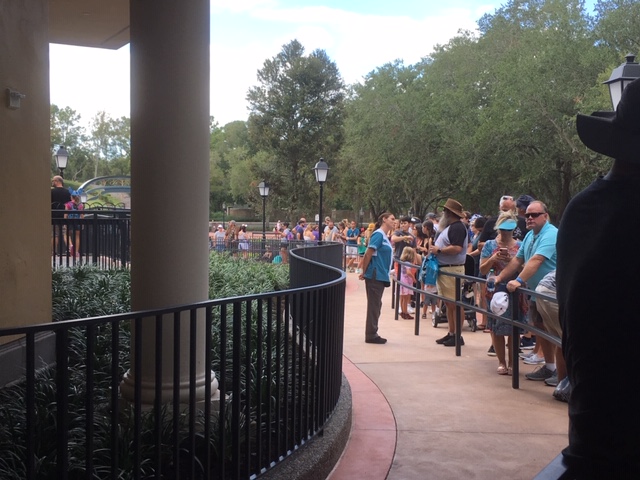 Before calling it a day on our Skyliner adventures, we decided to really put this new transportation option to the test. So, while I set off to join the line and board a gondola back to Hollywood Studios, my wife decided to hoof it over instead.

Funny enough, things did not get off to a great start on my end. While the line was short when I joined it, a temporary stoppage caused the queue behind me to grow significantly. Rides did eventually resume, but it was 12.5 minutes from the time I joined the line until I got into a gondola.

When I arrived at Caribbean Beach to transfer, I noticed that the line for those headed to Epcot was utilizing an extended queue, likely due in part to the downtime. As for the Hollywood Studios line, I all but walked onto the gondola, waiting less than a minute. Despite that speedy departure, my wife had already arrived at Studios before I even left for my final leg of the trip.

I landed at Hollywood Studios after a total trip of 33 minutes and 50 seconds — remarkably similar to the reverse of my trip. Meanwhile, my wife made the walk in just under 21 minutes, keeping an average pace of 17 minutes and 32 seconds per mile (and it was a total distance of 1.17 miles). That means that, had I not had to wait for the Skyliner to resume operations, I probably would have arrived about the same time as her. C’est la vie. 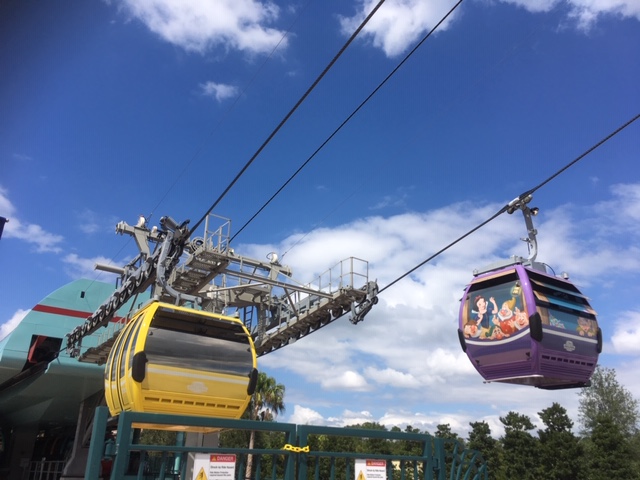 Last but not least, I figured I should spend some time (and drink some coffee) at Caribbean Beach, so we headed back there. This time the line actually looked shorter at Hollywood Studios but managed to take a bit longer. In fact, it took more than 10 minutes before we were seated in our gondola.

From there, it was a short trip from the park to Caribbean Beach — about 6.5 minutes. Thus, if you’re staying at this particular resort, you could potentially get from your room to the front gate in about 10 to 15 minutes (depending on where your room was located and what lines were like of course). That’s pretty sweet and, to me, seems like the kind of perk that will make this hotel one of Walt Disney World’s most popular from here on out.

My Thoughts on the Disney Skyliner 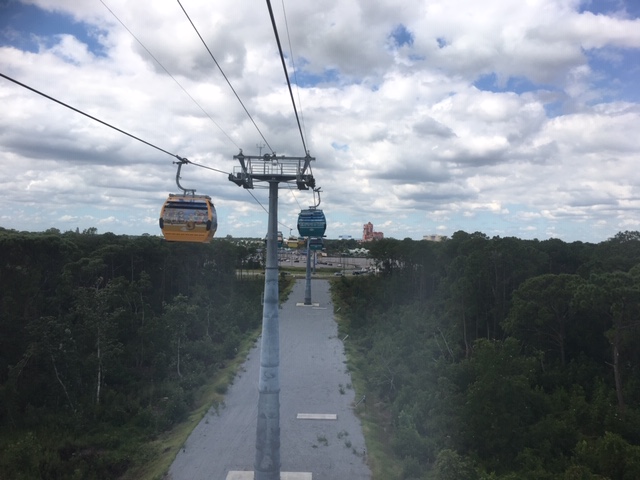 First of all, while I found it fun and interesting to time my different travels on the Disney Skyliner, it’s undeniable that there’s an element of luck involved in how long you’ll actually wait. As I just mentioned with my walk vs. Skyliner trip, had the line been operational when I approached, the trip time could have been closer to 20 minutes instead of 30. On the other hand, I imagine that trying to travel in a certain direction in the morning or after park close could add significant queue time — and I don’t even know what happens in inclement weather.

What I’m getting at is that it’s hard to say whether or not the Disney Skyliner is the fastest mode of transportation Disney has to offer when it comes to park hopping or traveling from your resort to the parks. That said, personally, I’m thrilled to have it as an option. In terms of traveling between Epcot and Hollywood Studios, I think I’d likely choose it over the Friendships but might ultimately decide to just walk instead. At the same time, if I were heading to either park from Art of Animation, Pop Century, or Caribbean Beach, there’s almost no way that I’d opt for anything other than the Skyliner due to its rapid loading line, nice breeze, and fun views.

In conclusion, I give the Disney Skyliner a thumbs up and look forward to many more high in the sky travels.