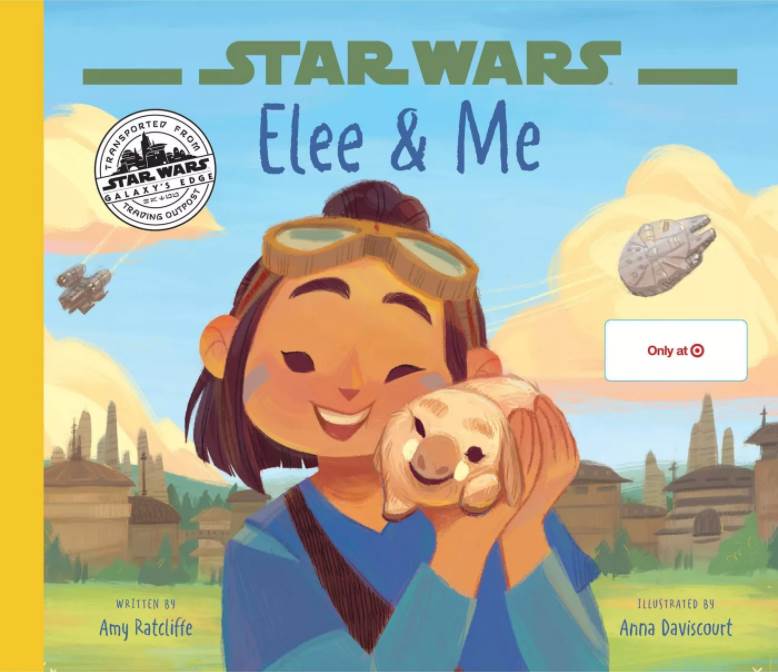 Author and entertainment journalist Amy Ratcliffe is having a busy year in A Galaxy Far, Far Away. She contributed her first prose writing to the Star Wars fictional universe in the short-story anthology From a Certain Point of View: The Empire Strikes Back, brought mindfulness and meditation practices to the space-opera saga in Star Wars: The Jedi Mind, and now has released her first children’s book, inspired by the Star Wars: Galaxy’s Edge themed areas at Disney Parks, entitled Star Wars: Elee & Me.

Elee & Me tells the story of young Salju, who eventually grows up to be the proprietor of Black Spire Station, a repair shop on Batuu. One day Salju’s galaxy-hopping father brings her a gift upon his return– a tiny boar-like creature called a therii, which she names Elee. Salju takes Elee to the local Creature Stall in Black Spire Outpost’s marketplace, where its owner Bina helps her figure out how to take care of her new pet. After that, the two become inseparable, and we follow Salju and Elee as they romp around Batuu and have adventures, all while Elee begins to grow to enormous proportions. Salju must decide what’s best for her companion as Elee gradually outgrows the home they share.

This book would make a wonderful introduction to the world of Star Wars: Galaxy’s Edge for very young readers. I could see kids getting very excited to visit Disneyland or Disney’s Hollywood Studios to see Black Spire Station for themselves after reading about the exploits of Elee and Salju. Beyond that, Star Wars: Elee & Me is a touching, fun tale that will likely have children reflecting on their own relationships with their pets and the responsibility they take on in adopting a furry friend. Plus, for the attentive Star Wars fans among the kids who read this book– not to mention their parents– Ratcliffe and talented artist Anna Daviscourt (The Secret Garden) have hidden some fun Easter Eggs in the pages and on the cover, like the Millennium Falcon and the Razor Crest ship from The Mandalorian.

Coming soon to Target (on 11/3) as part of their Galaxy’s Edge Trading Outpost collection: my first children's book, #StarWars: Elee & Me with art by Anna Daviscourt! Set on Batuu, it's about Elee and Salju and their very special bond. I adore both of them and hope you will too. pic.twitter.com/6AgFLVokLC

Star Wars: Elee & Me is available now, exclusively from Target.