It’s hard to believe that the Walt Disney Family Museum has been closed for a year, going dark after March 5th, 2020. With the exception of 24-days in November, during which they were allowed to safely reopen, members and fans have only been able to access their experiences virtually. But what a year of online content it’s been and on March 5th, the 1-year anniversary of the start of the shutdown in San Francisco, they hosted their latest Happily Ever After Hours event with writer Dave Reynolds. We’ve been covering them since the beginning and while we’re counting and celebrating milestones, this is our 41st Happily Ever After Hours event recap. 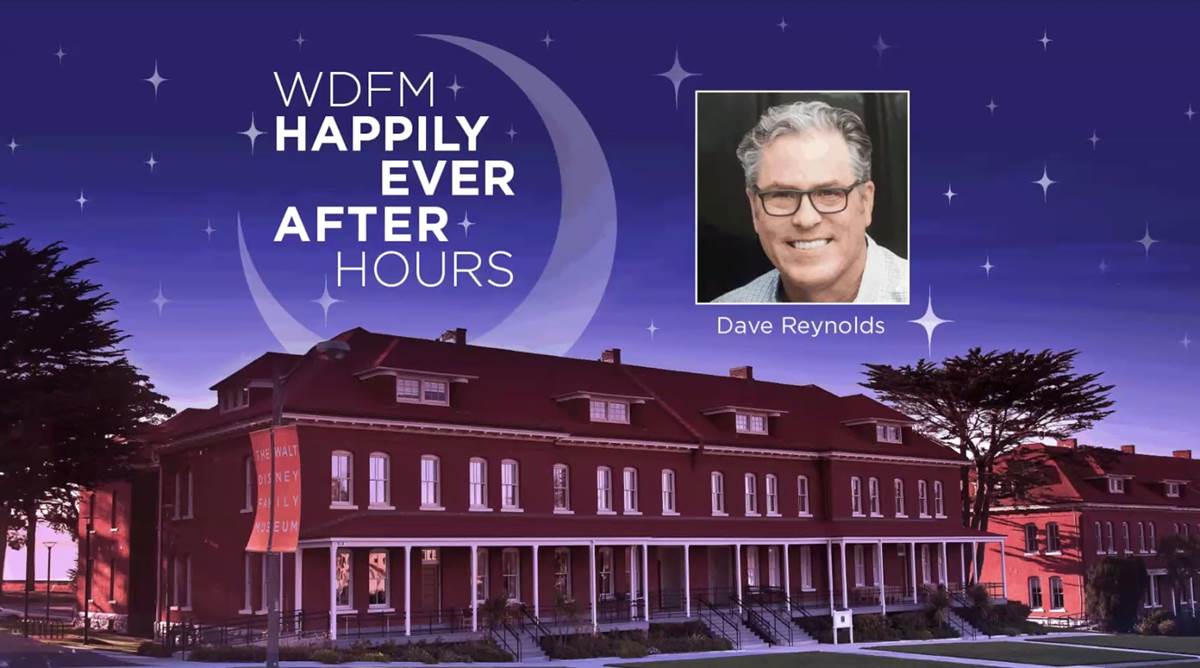 1. Dave Reynolds Thought He Would Be a TV Writer

Although Raiders of the Lost Ark was the film that inspired Dave Reynolds to get into writing to begin with, his ultimate career goal was writing for TV. Starting in 1993, he became one of the original writers on Late Night with Conan O'Brien and his agent was working to get him a job with a sitcom. “While I was waiting, my agent said ‘Would you like to go over to Walt Disney Feature Animation and do dialogue punch-up?’” Starting with Tarzan, Dave found that in animation, a writer has complete control over what makes it to the screen. “There are no mistakes in animation because somebody had to approve it.” While he continued to write for Conan, he stuck around Disney for a while.

2. He Took Over Writing Atlantis: The Lost Empire

“When Kirk [Wise], Gary [Trousdale] and Don [Hahn] asked me to come on, Tab [Murphy] worked on the front end of it,” Dave explained about his work on Atlantis: The Lost Empire. “once they had the story straightened out, then it was just flushing out characters.” Because the cast of characters was pretty big, Dave had to work extra hard to make sure each of their lines gave the audience a lot of information about their characters. With the sci-fi action animated film, in some ways Dave felt like he was making a James Cameron or Ridley Scott movie.

3. Atlantis Was Ahead of Its Time

“We thought it was a great, solid movie, but there was an impression of what a Disney movie is,” Dave explained about the underwhelming box office performance of Atlantis: The Lost Empire. “It just didn’t seem like a Disney movie, although it was all Disney. It was exactly what Disney makes, those big, otherworldly movies.” He added that many of the creators and animators on the film had worked on films that audiences thought of as Disney including Beauty and the Beast and The Lion King. “Unfortunately, I think at the time, people were like ‘What is this?’ But now, it’s such a solid movie, the visuals are so cool, you could remake it tomorrow.” You can trace the legacy of films like Atlantis to the movies Walt Disney Animation Studios makes today, big stories like Big Hero 6, Zootopia and Raya and the Last Dragon.

4. He Helped Turn “Kingdom of the Sun” into The Emperor’s New Groove”

“It was this massive, cinemascope [film] set in Incan culture and it had six original songs by Sting and it had this beautiful tapestry look to it,” Dave shared about Kingdom of the Sun, which had been in development for a long time with a different writer. Producer Don Hahn asked Dave to come on board just to punch up some dialogue, but he had a greater impact on the future of the project. “That’s when I met Mark Dindal, who was co-director of ‘Kingdom of the Sun.’” At a certain point, the executive team realized that the project wasn’t working and requested that it be retooled. Mark and Dave sat down with Chris Williams and set a few of the characters from ‘Kingdom of the Sun’ in a new story inspired by Chuck Jones humor. Several groups presented their ideas, but their pitch was chosen and the film became The Emperor’s New Groove.

While Disney approved the new story, they were unwilling to move the release date back. The team had just 17 months to do the same amount of work typically done in 4 years and a minimum of 9 months would be needed on the animator’s end.  “I grabbed a yellow legal pad and I went into a conference room with Mark Dindal and Chris Williams,” Dave recalled about the day they got the news. “We were writing, recording and animating the movie at the same time, so there was no room for error in that process.” At the same time, because they were on such a tight deadline, Disney’s executives left them alone. That’s part of how that project yielded such a unique film.

Disney is known for their synergy and during the compressed production on The Emperor's New Groove, ESPN made a request. The sports network was going to start broadcasting Double Dutch Championships and wanted the sport to be featured in the film. Because the film was already so out there, it wasn’t hard to find a place for it. “It was one of those movies where you could do that… We could justify it being in the movie.”

7. There Was Never a Script for New Groove, But The Walt Disney Archives Needed One Anyway

“When the movie was over and it was about to be released, a guy comes and knocks on my door,” Dave shared about an unusual part of the process he wasn’t prepared for. It was someone from the Walt Disney Archives asking for a copy of the script for their records, a practice followed on every film made by The Walt Disney Company. The only problem was, they made the film so fast that there wasn’t a script. “Our script supervisor and a couple of interns took all the scenes from the movie and collated them and turned it in with my name on it,” he joked, sharing that the Archives got their script two weeks after the film had been playing in theaters.

Dave Reynolds soon found himself working at Pixar Animation Studios alongside Andrew Stanton on Finding Nemo. He recalled that Ellen Degeneres had already been cast as Dory and the director had Albert Brooks in mind for Marlin, so the actor was invited to the studio in Emeryville and given a tour. While there, he got behind a microphone and improved, sending them into stitches. But when he found out another comedian was already on the project, he told the director and writer that they already had their comic relief. He was able to be persuaded, but after Brooks left, Reynolds had a moment of realization. “I went ‘Oh my gosh, Andrew, he can’t be funny at all. His son’s been kidnapped, he can’t do what he just did on the tape to us.’”

9. He Feels it’s Important to Be Present During Recording Sessions

While not every director allows it, Dave Reynolds finds that a lot of time can be saved by having the writer sit in on the recording sessions with the actors. “I feel that you rework about 1/3rd of the audio that you hear,” he shared, adding that he often rewrites dialogue to better fit an actor’s voice and that it also helps being present when spontaneity arises. On Finding Nemo, Marlin originally had a speech of hilariously awkward dialogue to share with Bruce and the sharks, but when Albert Brooks started improvising a breakdown of a joke that took 10-minutes to get through, it ended up completely changing the scene and requiring setup for the joke earlier in the film.

“We didn’t want people to get tired of Dory forgetting things,” he shared, explaining that a lot of rewrites happened in the studio with Ellen Degeneres, turning questions into dialogue that implied that she didn’t understand. One of his biggest concerns was in the final act when she actually meets Nemo for the first time and doesn’t know who he is. He had heard that test audiences loved it, but he confessed to having paid to see it with a real audience and waiting 90-minutes to hear the response for himself.

“Michael J. Fox was just as cool as you’d think he would be,” he added, going back to Atlantis. “He loved Milo, so it wasn’t hard to get him bouncing around on the soundstage.” While working with the actor, he shared with Dave that when he first came to L.A., he had been told he wouldn’t make it and he should go home. Recording the voice of the lead character in a Disney animated feature was a gratifying experience for him.

10. On An Animated Film, Writing is Not a One Person Job

“I believe my first draft of the script starts the process,” Dave shared about the teamwork required to create the story of an animated film. From his script, the storyboard artists interpret it and make an animatic, that then gets rewritten continuously until the story is finalized, often done in sequences rather than the whole script all at once. And ultimately, the story has to be right for the director, who usually gets the final say. He added that at Pixar, there’s a rule in the story room that if you shoot down an idea, you have to have a new one to offer. It keeps the story sessions positive and starts a dialogue.