How do you take one of the most evil villains in the Disney pantheon and somehow get us to root for them? We’ll find out in the upcoming film, Cruella,set to open in theaters where available and on Disney+ Premier Access on May 28th. 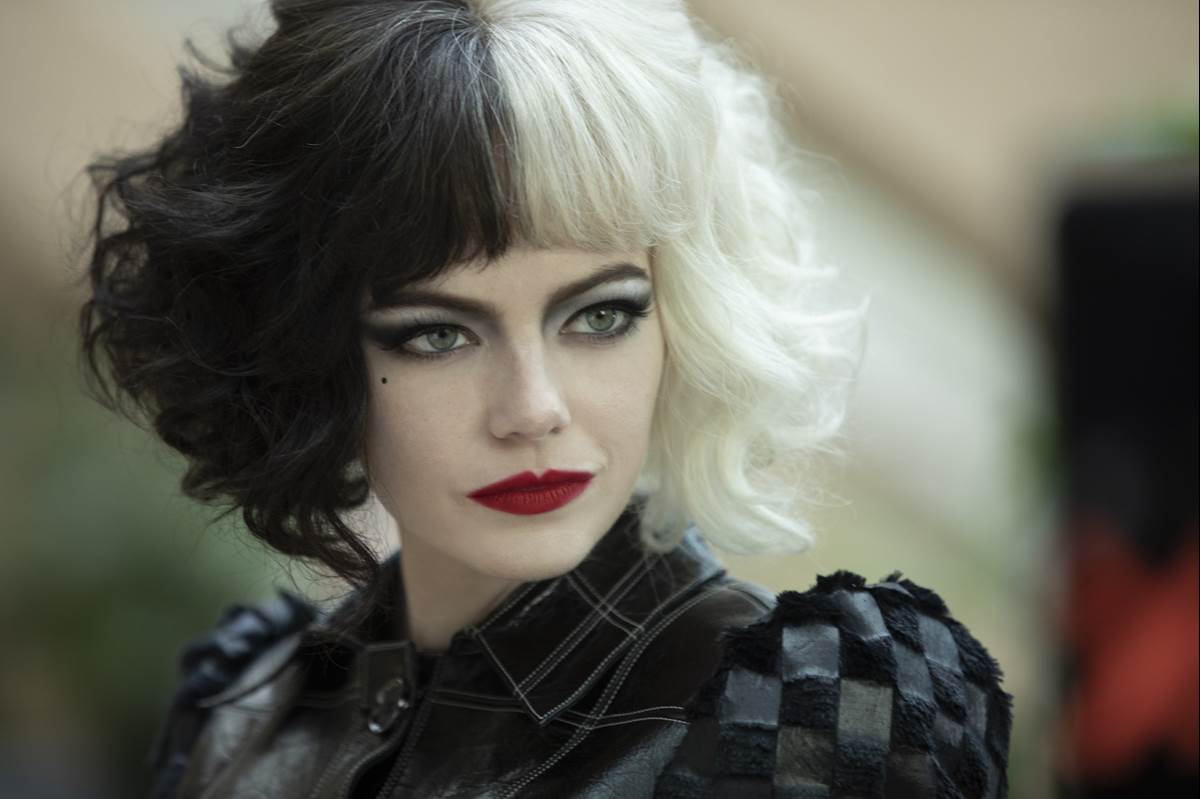 First, as I so often do, a little history about the character, Cruella De Vil. Debuting in 1961’s 101 Dalmatians, Cruella De Vil (voiced by Betty Lou Garson) was the main villain of the film, an old schoolmate of Anita Radcliffe’s who has a stylish taste for furs and fashion and assigns two bumbling bandits (Horace and Jasper) to steal Anita’s 15 dalmatian puppies to add to her existing 84 (which she allegedly purchased) to create a line of exquisite dalmatian fur coats. 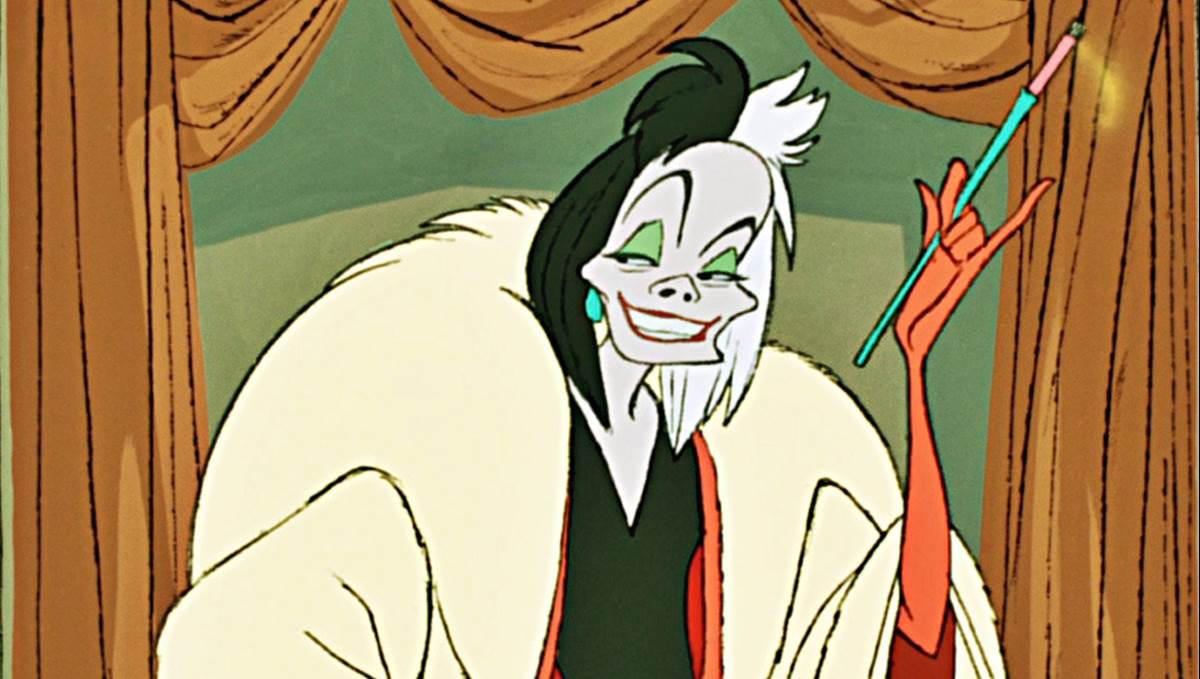 Unlike many villains before her, she does not possess any special powers, nor does she plan out any kind of elaborate scheme. Animated by the legendary Marc Davis, many of her traits carried over from the original novel including her signature 50/50 split of black and white hair. But that wasn’t the last we saw of the character. She also appeared in the direct-to-video sequel, 101 Dalmatians II: Patch’s London Adventure, where she once again tried to steal the dalmatian puppies, this time for a painting before going mad and demanding a fur coat yet again. She was also a recurring character, like similar classic characters, on House of Mouse. She also appeared in live action form, this time played by Glenn Close in the 1996 live-action remake of 101 Dalmatians, where the plot (and her character) stayed mostly the same as the original animated feature. There was also a sequel, 102 Dalmatians, which sees a reformed Cruella (who now loves dogs) revert back to her fur obsession and embark on a story that follows a similar plot to the prior film. 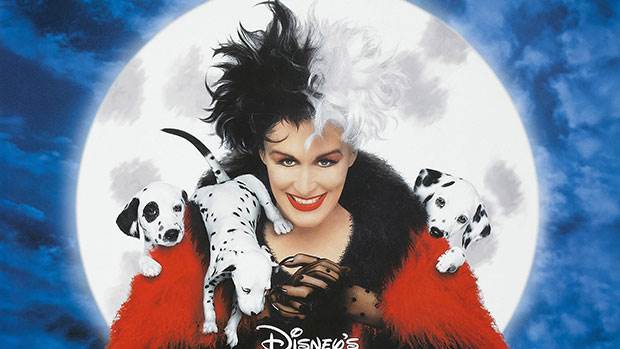 The upcoming Cruella, however, is not a remake of the original animated film. It was back in 2011 when we first heard  about a live-action version of an origin story for the character, channeling the success of Maleficent. Under the title Cruella, we also knew that the film was being penned by Aline Brosh McKenna, who previously worked on the live-action Cinderella, but was also widely known for adapting The Devil Wears Prada. Over time, the film would see more writers come on to develop more final versions of the story, all while Glenn Close had returned as one of the Executive Producers.

In early 2016, the big news. Emma Stone (who would later win an Oscar for her performance in La La Land) is now attached to the project as Cruella herself. But the project still didn’t have a director, until they landed on Craig Gillespie, director of the critically acclaimed I, Tonya, who had previously helmed both The Finest Hours and Million Dollar Arm for Disney. We also now have a more final script thanks to Tony McNamara. But Cruella isn’t a villain yet, right? In fact, she’s not even Cruella… Stone will be playing a young grifter named Estella, a clever and creative girl determined to make a name for herself with her fashion designs. 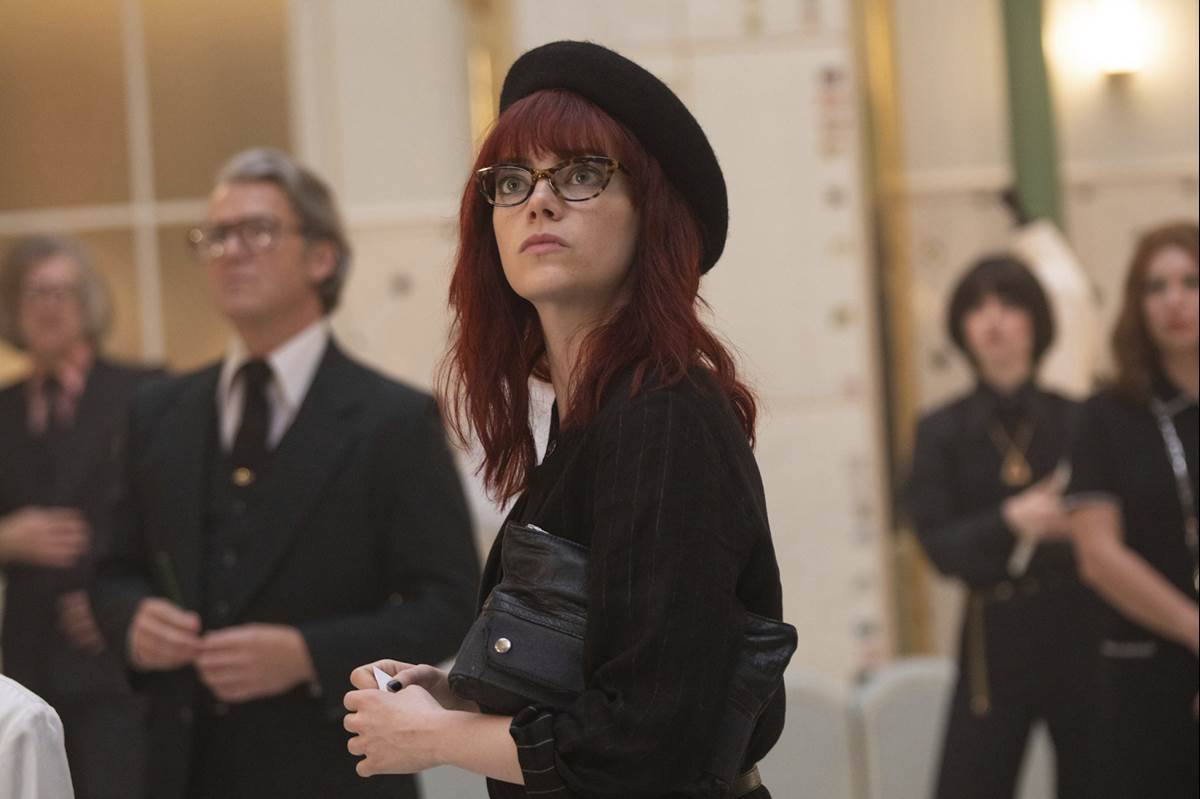 At D23 Expo 2019, it was announced that principal photography had already begun on Cruella, and an image was released (below) that revealed not only would we see Estella/Cruella in the film, but that she would be joined by her two bumbling burglar buddies, Horace and Jasper. 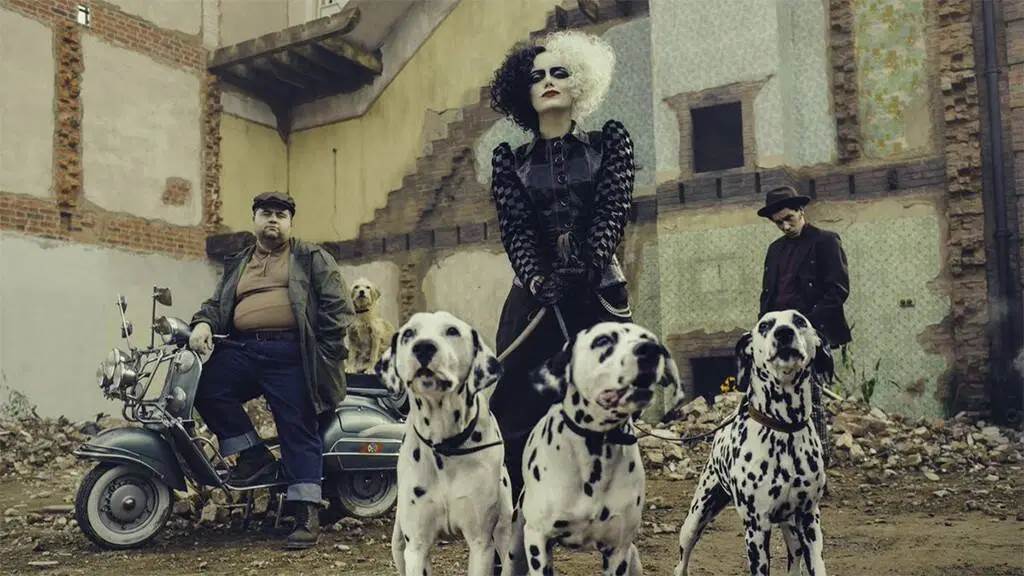 Game of Thrones’ Joel Fry, who we’ve also seen in Yesterday, 10,000 BC, and Love Wedding Repeat, is set to play Jasper, and I. Tonya’s Paul Walter Hauser is playing Horace. Estella befriends this pair of young thieves who appreciate her appetite for mischief, and together they are able to build a life for themselves on the London streets. 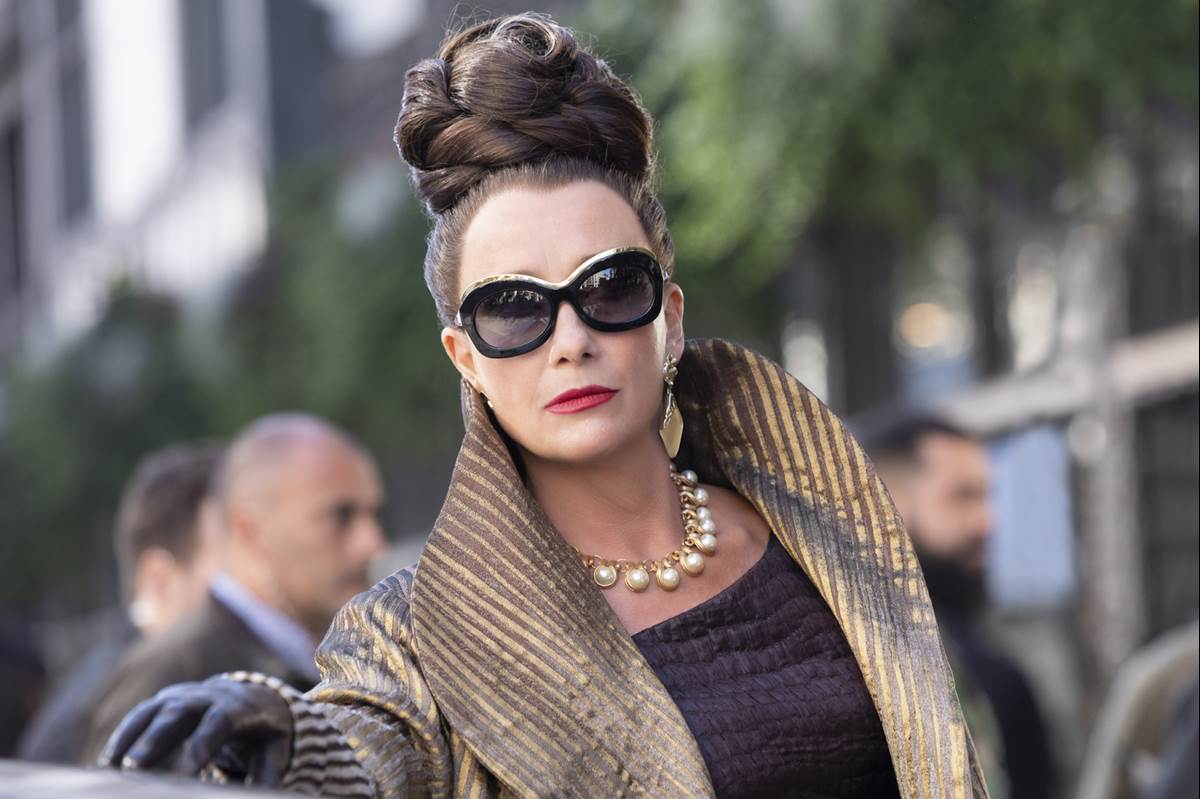 Estella’s flair for fashion catches the eye of the Baroness von Hellman, a fashion legend who is devastatingly chic and terrifyingly haute. Playing Baroness is Academy Award winner Emma Thompson, whom we know knows how to play the eccentric creative type as we’ve seen in her turn as author P.L. Travers in Saving Mr. Banks. Serving as the antagonist to who would become one of cinema’s worst villains, the relationship between Baroness and Estella sets in motion a course of events and revelations that will cause Estella to embrace her wicked side and become the raucous, fashionable and revenge-bent Cruella. Also joining the cast of the film are Mark Strong, Kirby Howell-Baptiste, and Emily Beecham. With a specific setting in place and time, and with a legendary character who is driven by fashion, the film is also full of costumes that are characters in their own right. 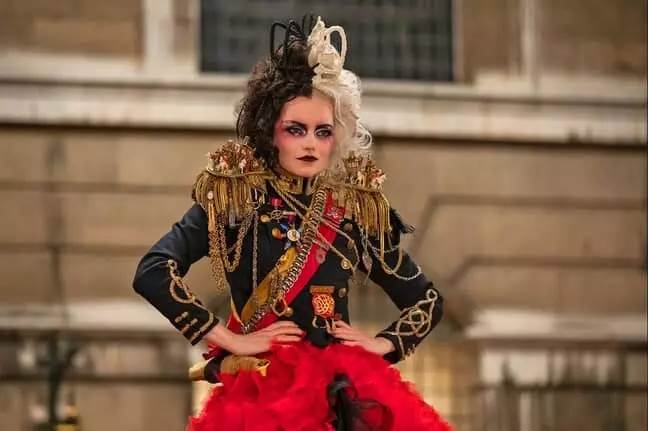 Designed by Academy Award winning costume designer Jenny Beavan, the costumes needed to be beautiful but also make the audience say “I want that.” Beaven even pointed out that some of the inspiration in the designs came from the story itself, saying “"It's quite clear in the story how [Cruella] develops, so you've got a good arc to her life in clothes…as she becomes crueler and Cruella-er, she becomes sharper and more tailored." 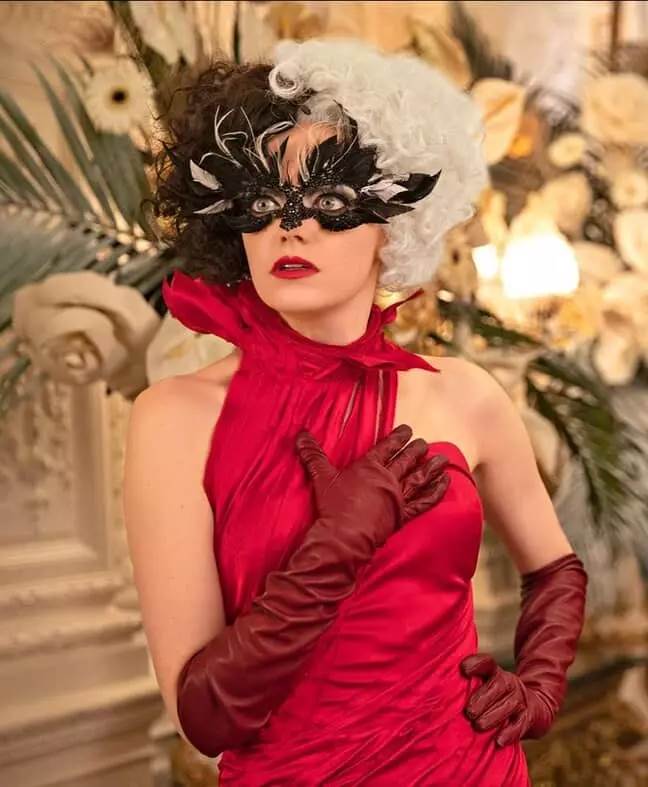 Filming wrapped in late 2019 with a debut set for 2020, and soon after we started getting teasers and trailers for our look at the origins of our favorite foul, fur-covered, fashionista.

After several delays due to the global pandemic, we are very excited for the release of Cruella in theaters where available, and on Disney+ Premier Access on May 28th. 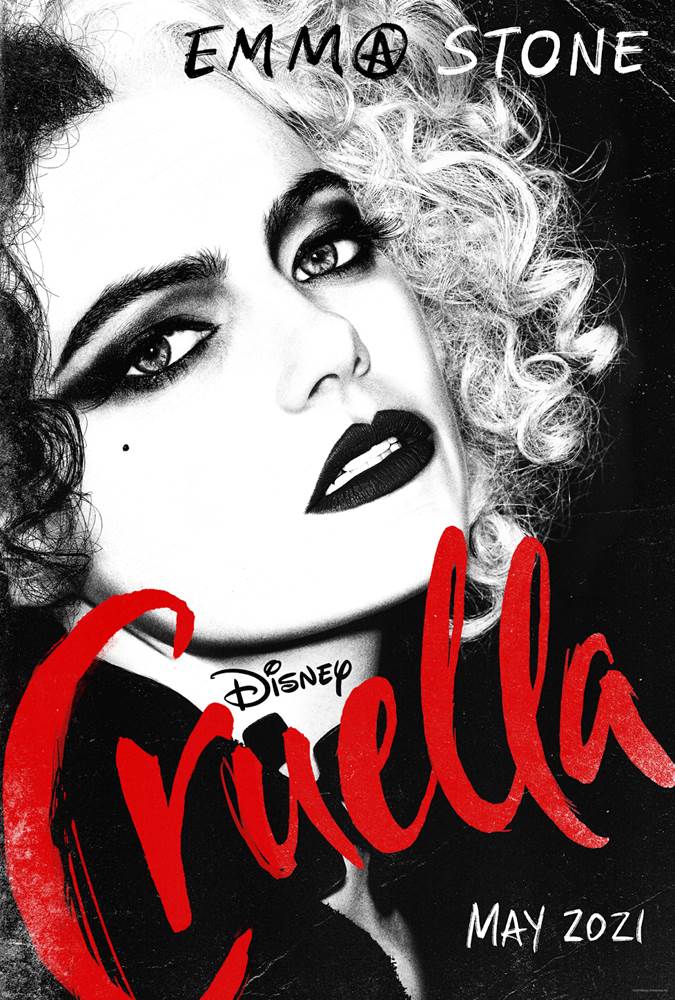