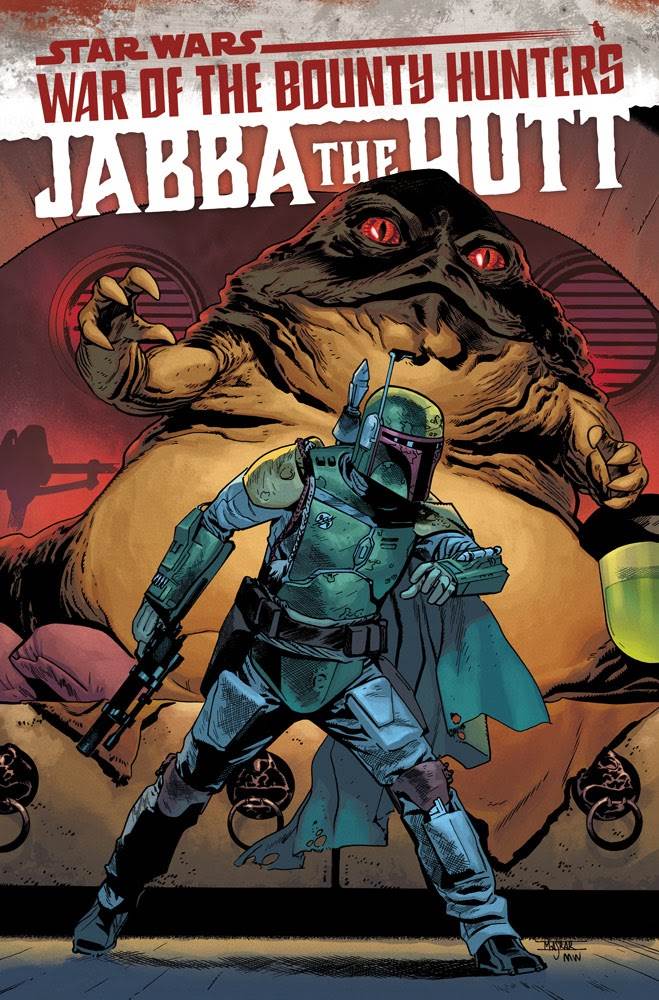 Over the past few years, author Justina Ireland has been making a name for herself in A Galaxy Far, Far Away via middle-grade and young-adult novels such as Star Wars: Lando’s Luck, Star Wars: Spark of the Resistance, and two recent books in the Star Wars: The High Republic multi-platform initiative from Lucasfilm Publishing.

And today, Ireland stepped into the world of Marvel comic books with the newly published one-shot Star Wars: War of the Bounty Hunters: Jabba the Hutt. It’s a bit longer than the average Star Wars comic (not to mention a dollar more expensive), but the title is a bit misleading as Jabba the Hutt is more of a supporting character in this issue. Instead, the story focuses on a new bounty hunter character named Deva Lompop, whose interactions with Jabba and fellow hunter Boba Fett go back years prior to these events set between The Empire Strikes Back and Return of the Jedi. 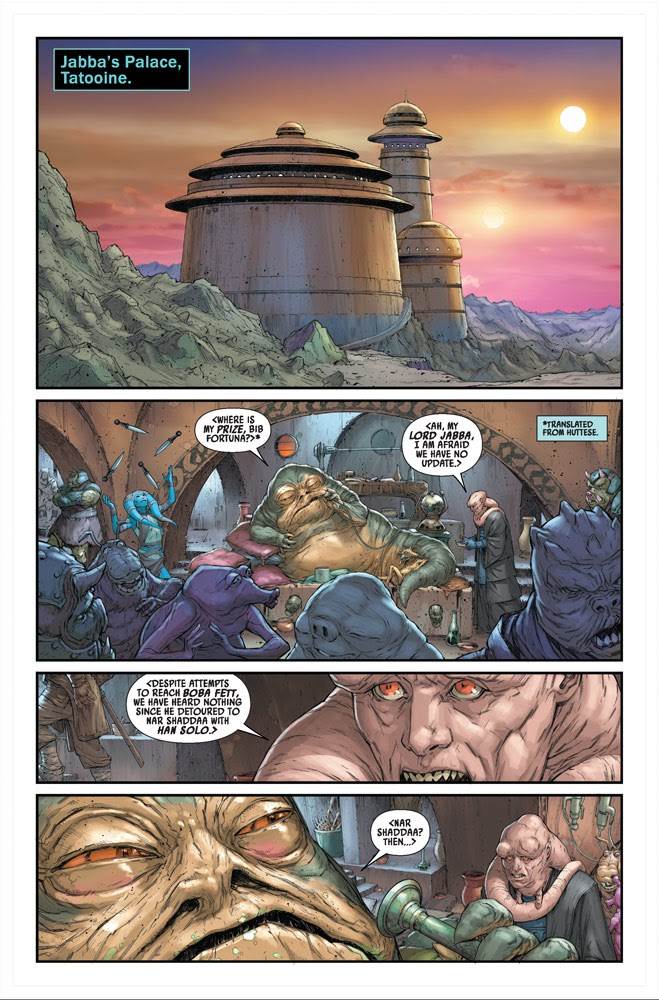 War of the Bounty Hunters – Jabba the Hutt actually takes place a bit earlier in the cronology of this summer’s ambitious Star Wars crossover event, while Boba Fett is working as a gladiator arena combatant on the smugglers’ moon of Nar Shaddaa. Fett is late in delivering the carbonite block containing smuggler and Rebel Alliance officer Han Solo, so Jabba has Bib Fortuna call in the evidently long-lived Deva Lompop– a member of the Shani species invented by Ireland to appear in both the Original Trilogy and High Republic eras– to track him down. We also see flashbacks to Deva’s first interaction with Boba Fett, when the two hunters were paired by the Hutt to capture a Zabrak named Jarm Brock whose allegiances are in question. In the “present,”  Lompop travels to Nar Shaddaa and seduces the Besalisk technician Doc Ragon, filling in some of the blanks regarding just how exactly the crime syndicate Crimson Dawn came to discover the whereabouts of the carbonite-frozen Han Solo during Boba Fett’s unplanned pit stop. 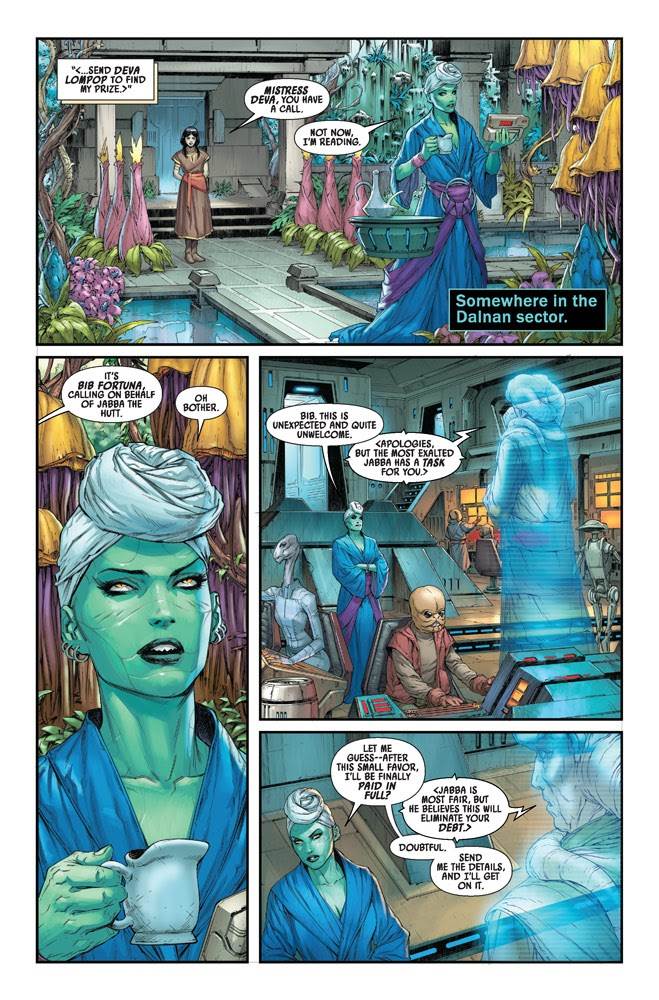 Then in the past (designated only as “some time ago”), we see the results of Fett and Lompop’s uneasy alliance as they visit the desolate Tatooine settlement known as Mos Entha, demonstrating Deva’s willingness to betray those she’s working alongside, even if it means putting herself– and her paycheck– at risk. She’s a fun new character with some cool weapons, unexpected abilities, and a lot of potential as she starts to get weaved into these tie-in issues before eventually popping up in stories set hundreds of years earlier in the timeline. I’d say Ireland’s initial foray into Star Wars comic book writing is a successful one, though I was kind of hoping the Jabba the Hutt title would more heavily feature Jabba the Hutt himself, and I found it just a tiny bit frustrating that we had to take a step backward in the narrative, but I understand why the powers that be wouldn’t want some of this stuff to have been revealed earlier. The artwork by Ibraim Roberson and Luca Pizzari (tackling the present-day events and flashbacks, respectively) is eye-catching and evocative, and I liked seeing a younger Boba Fett playing second banana. It’s another solid effort in Marvel’s expansive War of the Bounty Hunters output this year, and as always I’m looking forward to reading more. 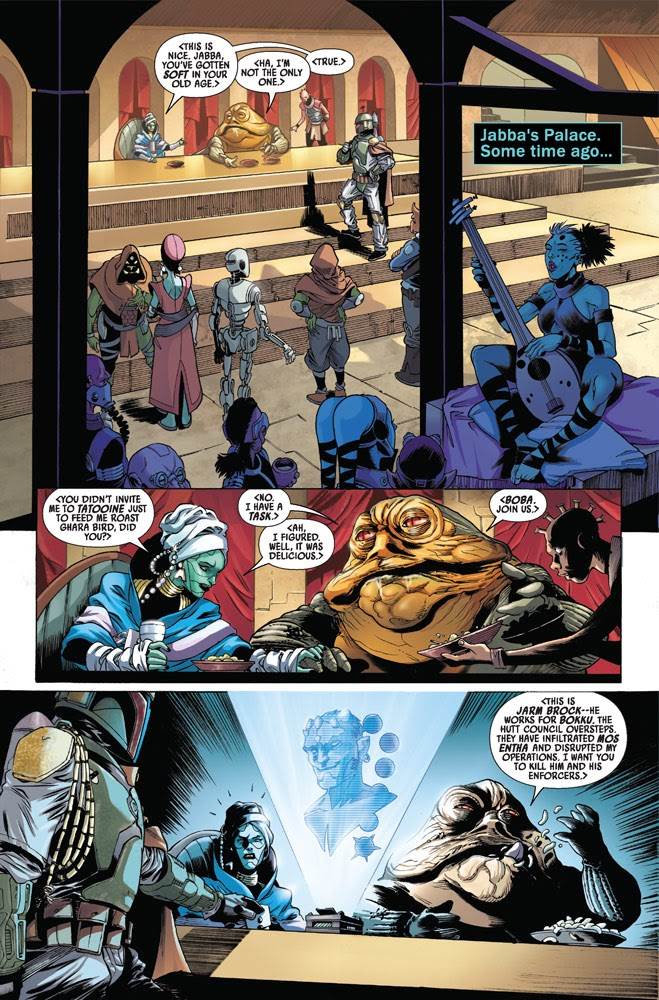 Star Wars: War of the Bounty Hunters – Jabba the Hutt is available now wherever comic books are sold.