Now that Triple Force Friday has come and gone and we are a scant two and a half months from the release of Star Wars: The Rise of Skywalker, Lucasfilm Publishing has begun releasing printed fiction leading up to the events of that highly anticipated new movie, Episode IX in the larger Star Wars saga. One of the first installments among that batch of ancillary materials is the junior novel Star Wars: Spark of the Resistance, which stars the heroes Rey, Poe Dameron, Rose Tico, and BB-8 as they answer a distress call on an Outer Rim planet called Minfar.

Set after the events of 2017’s Star Wars: The Last Jedi and marketed as part of the “Journey to Star Wars: The Rise of Skywalker” multimedia project, Star Wars: Spark of the Resistance opens with the above-mentioned protagonists collecting supplies for the regrouping Resistance forces when they are called to intervene on an off-the-beaten-path world populated by a furry green rabbit-like species called the Zixon (an obvious callback to the non-canonical character Jaxxon the Lepi from the original Marvel Star Wars comic books), who are facing a small-scale invasion by the menacing First Order. 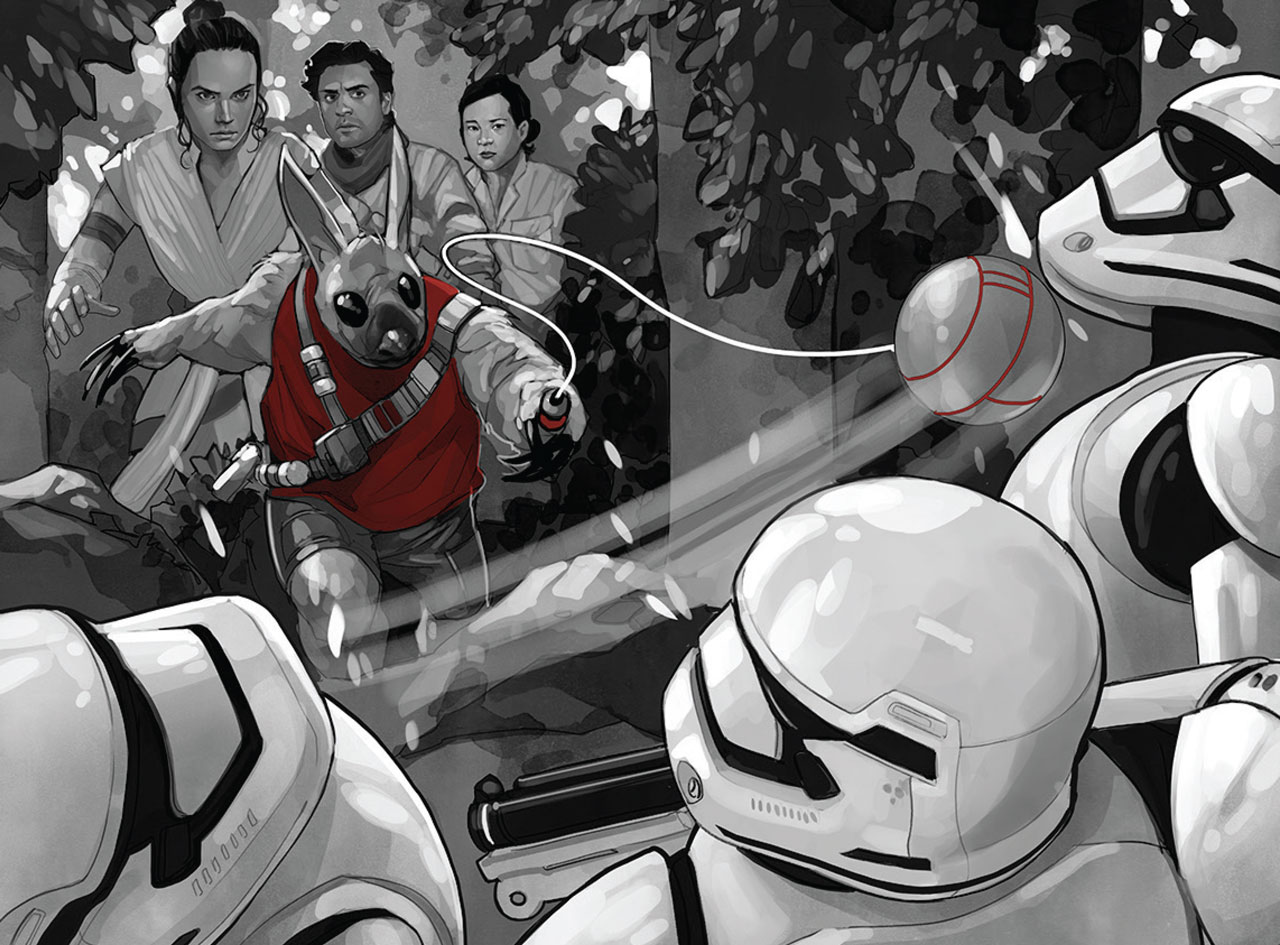 The First Order, accompanied by a mysterious scientist named Glenna Kip, is searching for an old experimental Imperial weapon called the Echo Horn, which can control the will of certain species via audio signals. And the weasley Commander Spiftz wants to be the officer who gets his hands on the device so he can climb the ranks of the evil galaxy-conquering military dictatorship. Fortunately for the Zixon, Rey and friends show up just in time to help the little critters fight off the armored forces and try to stop the baddies from acquiring such a dangerous implement. And perhaps they will find help from another unlikely source along the way.

Star Wars: Spark of the Resistance definitely lives up to its categorization as a junior novel, and I would recommend it most to reader between the ages of around 8 to 12. Author Justina Ireland (Dread Nation, Star Wars: Lando’s Luck) utilizes very simplistic prose to get across the extremely straightforward story of Resistance pals coming to the rescue of an adorable new species in the Star Wars canon. Older fans of Rey, Poe, and Rose may be interested in some pleasant interplay between those characters, but be forewarned: Finn and Chewbacca are off on another mission, so they’re only briefly mentioned in these pages. Otherwise we don’t really learn much about what the Resistance is up to between Episodes VIII and IX, except that they are gradually amassing a new fleet of ships and attempting to rebuild their forces. It’s unlikely this story aimed at much younger audiences will have much of a bearing on the overarching Star Wars narrative, unless the Zixon show up later on to help their newly formed Resistance allies. 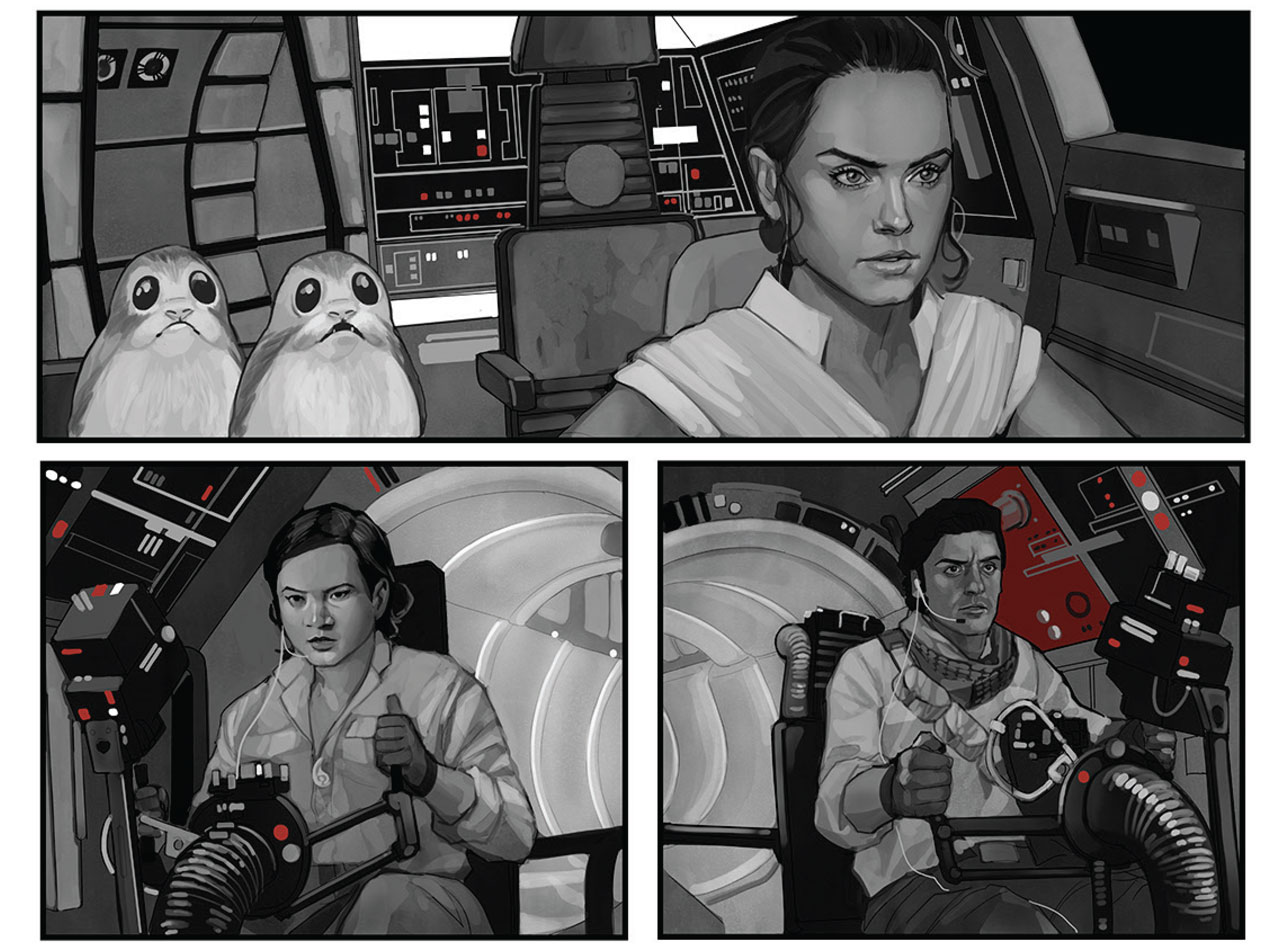 This book also features some funny appearances by the porgs who have made their new home aboard the Millennium Falcon after The Last Jedi, as illustrated in the above evocative artwork by Phil Noto (Star Wars: Lost Stars, Marvel Comics’ Black Widow), which is peppered sparingly throughout the novelette. Star Wars: Spark of the Resistance is a light, fun, probably mostly inconsequential side quest story spotlighting some familiar and popular sequel trilogy characters, and it will likely be best enjoyed by grade school enthusiasts of A Galaxy Far, Far Away.

Star Wars: Spark of the Resistance is part of “Journey to Star Wars: The Rise of Skywalker” and is available now wherever books are sold.