In the past, the Green family from Big City Greens has gathered together to celebrate various shorts from every arm of the Disney Channel with Shortsgiving. Well, this year, they’re back but this time trying to raise the spirit of Halloween with a group of shorts with Shortstober! 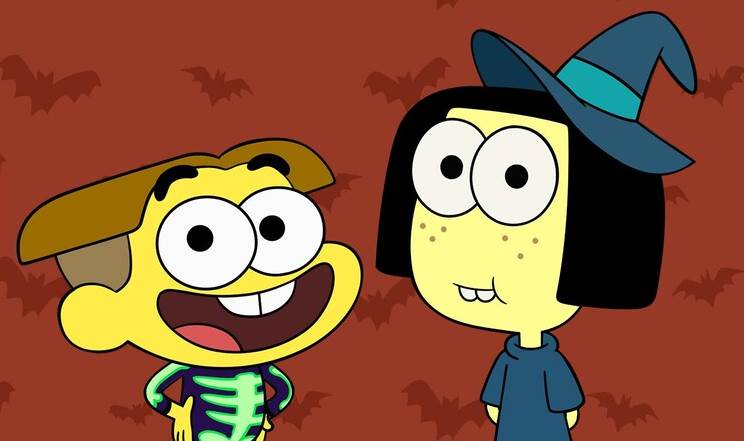 With Bill running the projector in full werewolf costume while Cricket and Tilly host the festivities, creating spells to conjure the spirits, they first pull up some Chibi Tiny Tales shorts based on the popular Disney Channel franchises, Descendants and Zombies.

They also dive into the newest animated series on Disney Channel with new chibi shorts based on The Ghost and Molly McGee. One of these shorts will also look terribly familiar to fans of The Haunted Mansion located at Disneyland and Walt Disney World, as it sees Scratch (the ghost) head into the landmark mansion with human pal, Molly.

It’s then into another few rounds of Theme Song Takeover with the cast of Amphibia, with both Sasha and Marcy (Anne’s friends who got transported through the music box with her) taking over the theme song and telling their own version of the story. These shorts offer a very quick summary of what’s going on for anyone who wants to jump into the series at this point, offering a surprisingly good catch-up for their characters.

As the Green kids continue their presentation and Bill grows more and more uncomfortable in the werewolf costume, they decide to reflect on some of their more successful attempts at talking to spirits. For example, the kids are great at making phone calls, and Tilly has made a ghost friend, Cricket has contacted Zombies, and both were able to learn some secrets about Area 51.

The season premiere of Big City Greens has also got a song stuck in our head during their Halloween episode, “Squashed!” which had the catchy tune “Monster Man” playing throughout. Thanks to a Broken Karaoke short, we now know about the origins of that singing doll, and the full song about Dan the Monster Man.

After the song, another Chibi Tiny Tale retelling the story of Halloweentown is shown before the official premiere of a new chibi short based on The Ghost and Molly McGee that sees Scratch go trick or treating throughout town and rampaging on a sugar high.

Spoiler Alert: Eventually, the kids are able to raise the spirit of Halloween (or did Bill just finally get out of that Werewolf outfit) and the fun for the night gets scared away. Perhaps more holidays will bring more short compilations in the future.

To watch the full compilation of shorts as presented by Cricket and Tilly Green, check out Shortstober on the DisneyNOW App, or on Disney Channel YouTube below!