It’s been a long (really long) wait but finally The Owl House has returned! And they are wasting no time in reminding us something big is about to happen as all the action today is set around the Coven Day parade. 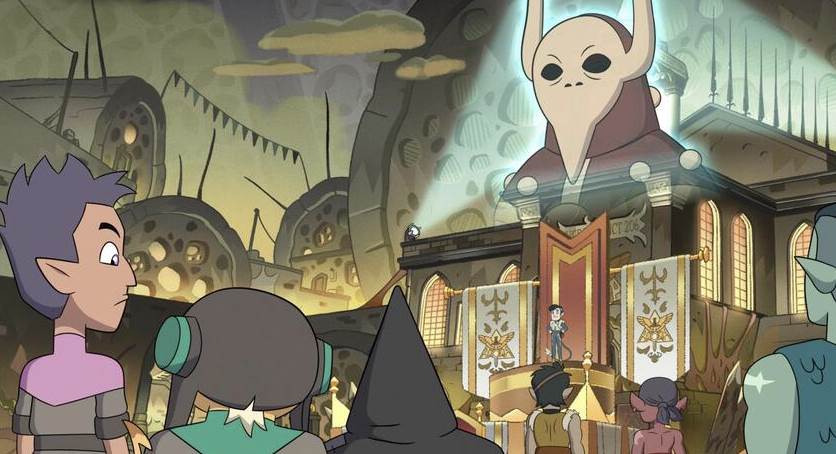 Follies At The Coven Day Parade

Just like at the beginning of the season, Luz makes a video for her mom kind of catching us up on everything that has happened so far. If you recall from the last episode, “Yesterday’s Lie,” Luz was able to kind of get back to the human realm and talk to her mom where she promised that she’ll come home and leave the demon world behind… despite the fact that she doesn’t want that.

Conveniently, Kikimora is nearby talking on a crow (which is a phone in this world) with her mother where she has to choose between her job at the Emperor’s side and her family. Luz sees the parallels between their situations and discusses with Eda before offering a hand to one of their arch-enemies (complete with recap of everything Kiki has done) concocting a scheme to kidnap both Kikimora and Raine Whispers, Eda’s ex, during the celebration.

All the while, Amity, who is now Facebook official (or whatever we call it on this YA animated series) with Luz, can tell that something is amiss with her girlfriend and thinks she isn’t telling her everything. Which, we know, is exactly the case because Luz’s promise to her mother has been something she isn’t sharing with anybody. As much as she tries to hide it though, the truth is bound to come out since she accidentally left her phone (where she was making those aforementioned videos to her mother) on the school steps for Amity to find.

Together, with the help of King and Hootie (in his Port-a-Hootie form) and Amity’s brother and his fireworks, Luz and Eda concoct a scheme to distract the crowd during the parade and kidnap both Kikimora and Raine. This way, Kikimora can still keep her job but go visit her family for the reunion under the guise, and Eda can find out what happened to Raine since the last time we saw them, they were being petrified, yet “saved” for the upcoming Day of Unity.

While Kikimora is alone and doubts the plan will work, Raine is back (unpetrified) and is acting very oddly before the reveal of the head witch of the plant coven, Tara Snapdragon, who has been helping Raine heal since they had been “sick” with a special tea.

Kikimora is well aware of the plan and how Tara can interfere with it, but before she can alert the others, the parade is about to begin.

Hootie and King are disguised in a giant float paying tribute to Emperor Belos which begins launching fireworks and the plan is in motion. At first, the mission seems successful, and everything goes to plan. Eda gets a chance to speak with Raine who seems to not remember anything that has happened recently, including their battle that ended with them being put into that contained state, saying that they haven’t seen each other in years. Promising to get through to them in some way, Eda whips out her glyphs and spells ready to break them, but Raine has their trusty violin which is their instrument of defense as well. Luz is running away with Kikimora when they are cornered, even while invisible, by Tara who is mocking them wondering out loud where Kiki could be, she is very important to the Emperor and even has a promotion waiting for her.

Right as Tara makes her move, an abomination shows up and stops her growing vines, caused by Amity who knew the whole plan thanks to their shared knowledge of the Good Witch Azura Books, book #5 to be precise.

In the alley, Raine and Eda are still battling when Raine finally cracks and says Eda needs to leave, and for old times, they’ll let her go, and even suspiciously says to travel for a bit. But why?

Luz and Amity set Kikimora on her way, but almost predictably, she turns on them but only because of this newfound promotion she is set to receive. She decides to try and attack Luz and Amity and bring them back to the Emperor as a thank you present, but Tara shows up and stops her. She wasn’t there to look after Raine, she was sent by the Emperor to watch over Kiki and test her loyalty. While yes, the promotion was real, there are no added benefits and really only means that the Emperor will spare her life.

As Tara and Kiki leave, Tara tells Luz that the Emperor is looking forward to meeting her. Wait…what? Luz has already met the Emperor in previous episodes. What does that mean?

Amity finally gets a moment with Luz to discuss what has happened with her portal door and she shares everything but back at the Coven Day parade, Raine sips their tea while Kikimora addresses the crowd under the watchful eye of Tara saying this year is particularly special since the Emperor wants to make an announcement.

He appears via broadcast, sharing that the Day of Unity is nearly at hand, and the Coven system is being perfected as the Titan has intended. A journey to the head of the isles will take place at that time, and a new utopia is set to be inherited by the worthy and will be free of wild magic.

During the broadcast, we catch a glimpse of Lilith at home with her and Eda’s mom watching the broadcast via crystal ball, it’s just a passing glance but definitely serves as a reminder that they are both still very much in play.

Before the broadcast ends, Belos also takes off his mask and reveals his face, claiming the strength of his supporters allows him to do so.

The speech serves up a lot more questions than answers, how do they plan on ensuring a society that will be free of wild magic? What does that mean for Eda and Luz, who practice wild magic? Was there a greater reason that we saw Lilith for that moment?

And now, a little bit of fun. If you take the first letter from the title of each episode, each season spells out a message. For season one, that message was “A WITCH LOSES HER TRUE WAY.”  With the return of The Owl House after their extended hiatus, we are now well aware of the remaining episode titles of season two and can decode this season’s phrase:

“SEEK THE KEY FEAR THE LOCK”

This episode of The Owl House is now available on Disney Channel and the DisneyNOW App. You can also catch up with previous episodes and seasons on Disney+.