At long last Freeform’s Motherland: Fort Salem is back! Our trio has turned into a quintet with the addition of Scylla and Adil (sextet if you include Nicte Batan or Khalida) and they’re hiding out in the midwest. Meanwhile a high ranking U.S. official has aligned themselves with the Camarilla; and back at Fort Salem the deadly Witch Plague may be gone but something mysterious/sinister remains. We flash back to 136,455 years ago. A group of six unknown witches are singing seeds causing the sky to fill with lightning. At the end of their song they embrace then go their separate ways.

In the Midwest our brave fugitives are working and living with other witches/dodgers at a “shipping and receiving facility” that also is magically housing them too. Raelle (Taylor Hickson) and Scylla (Amalia Holm) are finally able to spend some time together even if it is while they’re supposed to be working. Of course they’re not the only ones here as Nicte Batan (Arlen Aguayo Stewart) went with the group into hiding, per Tally’s (Jessica Sutton) insistence. She’s using her Spree work to disguise her face and wants the trio to change their looks too.

Back in the Capitol, Vice President Silver (Victor Webster) does an interview on the news, and names the girls who killed his daughter, Penelope. The reporter wants to know what he’d ask them. His response: “Why did it have to be her?” He then mentions unregistered witches living in the U.S. and says he’s gathered funding for a genealogical research project to “identify those with unknown witch ancestry…so we can protect them.”

Following the news report, the runaways meet with the dodger leader, Mac. He tells them most of the others believe them (himself included) about their innocence and attack on the Fort Salem base. But now that the VP is making public statements, Mac asks them to be careful. There’s a lot at stake. He wants to give them a safe space, but “make us safe with you.”

Anacostia (Demetria Mckinney) talks via farspeech with Silver’s security officer, Sterling Woodlot (Luc Roderique). Even he knows his boss is up to something, and it’s probably dangerous.

At Fort Salem, the newly named General, Petra Bellwether (Catherine Lough Haggquist) is walking the grounds and talking with her science advisor, Izadora (Emilie Leclerc). Groups are busy clearing the Witch Plague from the base. She tells the General that the markings on trees remain harmless, but a low pressure weather system is in the air.

The young girl Tiffany (who Scylla and Anacostia rescued) is once again in Scylla’s care. *I thought she was in the Cession with Quinn and Rae’s dad, Edwin?* Tiffany (Ava Marchfelder), tells Scy that she’s heard when witches change their face its that of someone they murdered. Scy is quick to tell her that is not true, it's simply your own work. Suddenly a bell sounds and a mysterious group is coming to the shelter. Mac tells them not to worry, it's a group of former Spree looking for a safe haven.

Raelle and Scylla are back to sharing a bed and they’re happy. Raelle says that for the first time she feels like she has a future to dream about. Scy says she loves her and she returns the sentiment.

During their breaks and down time, Tally takes up combat training on the roof with an undisguised Nicte. Nicte once again brings up altering their faces, “you’re nuts not to change your looks.” Tally’s not sure. As they train Nicte continually bests Tally. She tells the young soldier that she has talent but lacks prey drive. Nicte says she has limited sight—about a minute—in the future and can see what moves Tally plans to make. Tally has the ability too and starts to exercise her skill, but not before a bird poops on her head…as Nicte predicted.

The girls continue to talk about changing their looks, but Abigail (Ashley Nicole Williams) is absolutely against it. Also she really wants to talk to Petra, but they can’t. The phone lines could be monitored and potentially put everyone in jeopardy. As they chat, a girl from the new group, Vera, shows up and is very friendly with Scylla. She also knows Nicte even with her different face.

In Washington, Ana and Sterling are using magic to watch Silver. He’s meeting with an heiress known only as Kara and Alban Herst (the man who tortured Raelle). Sterling recognizes Herst from Fort Salem.

Unable to handle the distance, Adil and Abigail leave the facility to call Petra using a phone booth (what are those?). Nearby an officer on security duty for the Not Our Daughters (NOD) movement is checking supporters by scanning them with a flashlight-like device. He sees Adil watching. Adil interrupts Abigail’s conversation and leads her away. The guard scans the area with his device but sees nothing. Adil and Abigail use magic to hide.

Anacostia reports their findings to Petra who asks what President Wade’s position is on all that’s happening. She’s not blocking Silver’s genealogical project, but have they swayed her? After they talk business, both admit that they miss Sarah Alder.

Raelle’s mad that Adil and Abigail went off on their own. The group could get kicked out if they’re not careful. Abigail tells them about the flashlight device and how the guard was checking faces for work. “They’re getting closer.”

The next day, Tally is honing her new found sight skills to train with Nicte. As she attempts to grab her teacher’s lighter, she steps too far backwards and almost falls off the roof. Nicte catches her. Crisis averted. Almost. A pedestrian sees Tally’s near fall and reports the activity.

With nothing else to do while laying low, Khalida (Kylee Brown) shares her vast knowledge of magic with young dodger kids. She teaches them Mother Tongue and says it’s the root of all the world’s languages. Was this the group of women we saw at the beginning?

Anacostia calls a meeting with soldier M (Ess Hodlmoser). They discuss the tough year she’s had losing many of her trainees in the battle against the Spree and now the Camarilla. She needs a distraction, a new challenge. Ana agrees and assigns her a covert mission.

Adil and Abigail pause from working to flirt as their alter egos, “Dwight” and “Shelby.” “Dwight” says his feelings for her are growing and he thinks it's time to start a family. Abigail breaks character and says “Shelby” doesn’t know how to feel about that. He asks what Abigail thinks but before she can answer, the cops show up.

The officer from the NOD rally says they received a complaint that someone was messing around on the roof. A disguised Scylla handles the situation taking the officers on a tour of the facility. But the lead officer splits from the group. The gang hides and watches as he uses his flashlight device to reveal their housing. Everything is compromised and it’s Tally’s fault. The guilt weighs heavy on her.

Mac returns and is not happy to learn they’ve been found out. He tells everyone they have to leave. Scylla leaves a distraught Tiffany (“this place was nice, they had bathrooms and school”) in his care. She takes off with her fugitive friends.

Meanwhile M and Ana scope out a meeting VP Silver is having with Herst and Co. M enters the building through a rooftop air duct.

At Fort Salem, Izadora is conducting (Witch Plague?) inoculations outside. She holds up a spiral device to Petra’s neck and sings a seed. Suddenly they are interrupted as a thick black rain falls from the sky. But that’s not all, Peneolpe’s voice can be heard loud and clear singing they hymn “How Great Thou Art.” Her phantom voice addresses the group, “I suppose it’s a little late for me.” Izadora’s device drops and the glass shatters.

M crawls through the duct until she reaches a ceiling vent that looks in on the room. About 12 people are gathered   and Herast and Silver share their plan to drill into the Mycelium at Fort Salem and poison it. “We have secured their end.” 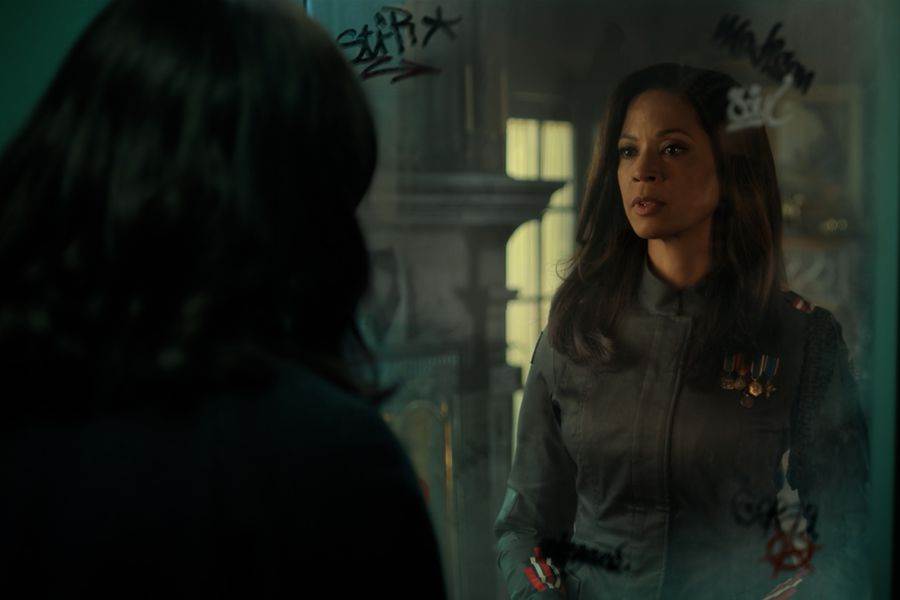 As the gang looks for another place to lay low, Tally bemoans their situation. A sympathetic Abigail states that she broke the rules too, only she didn’t get caught. Scylla offers a solution for helping Abigail talk to Petra, but it’ll require Spree work. At an empty rest stop, Abigail uses a bathroom mirror to contact her mother. They fill each other in on what’s been going on and Petra tells her about Herst’s warning to prevent the “Union of Earth and Sky.” They ponder if that means combining their work, handfasting, or bringing forth new life…

Somewhere in Basque Country a stranger sings a series of seeds and raises a body from the Mycelium. It’s Sarah Alder (Lyne Renee). The Mother of All.