After a brief hiatus in the middle of season three to let Amphibia conclude and the current seasons of The Owl House and The Ghost and Molly McGee wrap up, Big City Greens is back and packs some laugh out loud moments into a friendly courtship with Bill, and a not so friendly competition with insects and a robot. 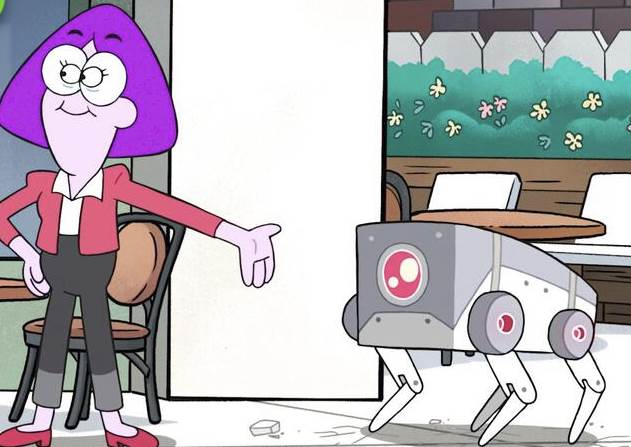 A new neighbor is moving into the apartment building next door to the Green family farm, and Bill sees a potential friend in need and an opportunity for a good deed to help him move his belongings. A bit of banter and we quickly see how much Bill and Doug Perkins have in common, including a fondness for fishing. Turns out, Doug Perkins’ fishing buddy isn’t as dependable as he would have liked, so Bill desperately tries to win Doug over and become his new fishin’ buddy for a competition.

At the cafe, Nancy, Cricket, and Remy are giving Bill advice. While Nancy says Bill should just go over and ask to be his fishing buddy and Cricket agrees, Bill interprets this as he should go over and prove his dependability. Saying that he was just fixing stuff around his own home, Bill heads over to Doug Perkins’ apartment and asks if he needs any work done. Turns out, his whole apartment needs rewiring. Personally, it takes me a lengthy amount of time before I’d ask a friend to help move or even take me to the airport, but I guess since this is one half of a 22 minute episode, we have to get things done pretty quickly around here.  Bill doesn’t quite seem to know what he is getting himself into, but he climbs into the attic (of the apartment?) and gets to work.

Over at the laundromat, Tilly has lost a sock, and inspired by Gramma’s true-crime podcasts and conspiracies, dives into a full investigation into the disappearance of her sock, knowing that there must be something bigger at play. She starts asking the other locals at the laundromat and discovers missing socks happen all the time, but all these missing socks from the same location must surely be connected. Andromeda arrives on scene to help the investigation, and together they interrogate the owner of the laundromat, Mr. Fluffenfold. He seems to not know anything about these particular missing socks, but also suggests that socks go missing at every laundromat around the world. Uh oh. The pair of children now know this conspiracy must be way beyond this little laundromat in Big City.

Back at Doug Perkins’ apartment, Bill has found himself in quite the wiry mess, and ends up falling through the roof thanks to an infestation of possums. Bill knows he can fix it, and runs home getting all the parts he needs. When he gets back to Doug’s place though, he is refused entry. Seems like Doug is going to call a dependable professional instead. Bill heads back to the cafe to talk about what has happened with Nancy and Cricket, when it’s suggested by his son that the only way to fix what he has started is by now posing as the repairman, fixing all the wiring, and then revealing his act after he has proven his dependability. Nancy knows this is trouble and advises against it, but shortly after, William Yellow the Repairman has shown up at Doug Perkins’ apartment.

After successfully completing the job, Bill does reveal himself much to Doug’s shock and horror (predictably). Lesson learned. Never trust a Cricket scheme. To cheer him up, Nancy, Cricket and Remy decide to take him out fishing.

Tilly and Andromeda have come up with a theory to present to Gramma that is just so big and crazy that it’s got to be true. Big Sock. Big Sock corporations must be working together to steal individual socks so that consumers keep buying them. Of course, their theory is a bit more drawn out than how I just presented it, but that’s the short version. Suddenly, Tilly’s sock reappears and she calls off the investigation. They might be onto something though, considering it was Mr. Fluffenfold who sneakily put the sock in a place where she would find it. Bum Bum Bum.

On the lake, Bill and co. pull up alongside Doug Perkins’ boat and Nancy insists that Bill talk to him and try and make things right and just ask him to be his fishing buddy, but Doug would not like that…he would LOVE it.

The Gloria + Green Cafe offers a delivery service, and guess who makes the deliveries! It’s Cricket! He has a whole routine, complete with regulars and he knows each of their orders. The favorite clearly seems to be Ms. Torres, who always gets Cricket wrapped up in a game of ping pong. Back at the cafe though, Cricket’s rounds seem to be taking so long that Gloria is overwhelmed and needs someone or someTHING to make her deliveries faster. Luckily(?) for her, Gwendolynn Zapp just happens to be the customer she is helping, and considering her life goal is the end the world, um er, automate the world, she has just the invention that the Gloria + Green Cafe needs – The DeliverNator.

An automated robot designed to take the jobs of delivery workers everywhere, the fact that the machine never tires, wastes time, or unionizes is appealing to Gloria, but is more concerned about the cost but Gwendolyn in her….efforts…is quick to just give her the robot. Tragically, this means Cricket will no longer be on delivery duties, and he’ll get stuck doing inventory. To retain his original position, a challenge has been created: deliver faster than the robot, and he’ll still be a delivery boy.

Next door, the Green house is filled with the pleasant and delicious aroma of something special – Gramma’s cinnamon buns. Bill and Tilly are so excited they can barely contain themselves but they run into the kitchen and find that they weren’t the only ones attracted to the sweet smell. ANTS! A full infestation, with so many that they carry the full plate of cinnamon buns away. Bill doesn’t care, the ants would just be extra protein. Gramma declares war against the bugs and look out, because she has that sword and is ready to start slicing and dicing. Tilly reminds her of a fact she learned once that for every ant they see, a thousand more lay in wait. Ominous foreshadowing?

Back at the cafe, the challenge begins. The DeliverNator takes off but playing on Team Cricket, Remy and Vasquez are hot on its tail keeping tabs on the machine to make sure Cricket wins. Cricket makes his rounds, but his service is subpar when compared to what we’ve seen so far, but it's still better than the automated service the robot provides. Cricket just finished his first delivery but the robot has already done its second one! Is he going to make it?

The ants are taking over the house and Gramma is destroying the place violently with her sword. Bill is ready to patch up the holes that they are coming in through, but that will just trap the ants inside the house! Gramma does what she can to kill all the ants and takes a well deserved nap, ignoring Bill’s requests for more cinnamon buns.  She wakes up to the ants crawling all over her. What about the sword? Nope. The ants got that too. She soon finds herself outside with Tilly who is already aware that the ants have literally taken over the house. Gramma is coming up with a plan to get the house back, but Tilly suggests a method that doesn’t use violence. So, Gramma decides to whip up more cinnamon buns, much to Bill’s enjoyment. Too bad he won’t be getting any. These are for the ants. She takes the plate around the house, gathering up the bugs and leads them out to a nearby dumpster. B Storyline over.

The DeliverNator has made its final delivery, but Cricket isn’t done yet. He still needs to visit Ms. Torres. Fortunately, he has Remy on his side who throws himself in front of the robot to stop it. Fearing a lawsuit for hitting the child, the robot immediately begins shooting out money for his silence. As the robot takes off again, Cricket is there and rolls a hot dog cart into it, destroying it instantly. Or did it? With the robot destroyed, he has all the time in the world now for ping pong with Ms. Torres. Remy calls him and tells him the robot is beeping, and he should probably get back to the cafe. Cricket tries to go, but Ms. Torres thinks he’s joking and looking to get out of their rematch. Mid-game, Remy calls again— The DeliverNator has rebuilt itself. Remy and Vasquez can’t do anything to help, as the robot has trapped them as a threat. Cricket leaves Ms. Torres’ house but leaves his hat behind in his haste.

He gets to the cafe and finds a proud Gloria standing alongside the returned robot, ready to take him off delivery duty. Ms. Torres pops in at just the right time to return his hat, but Gloria apologizes and says that Cricket will no longer be on delivery duty. Other customers overhear and praise Cricket and defend him, but Gloria realizes that he has a connection to people that will be better for business than just speedy deliveries. Only question now is who will do the inventory? Luckily, Bill has a serious craving for cinnamon buns and will do anything to get them.

This episode of Big City Greens is now available on Disney Channel and the DisneyNOW app. You can also catch up with previous seasons on Disney+.