Welcome back for another recap of Freeform’s Motherland: Fort Salem. While the group prepares to meet with the Council of the Great River, Alder and Khalida find a place to lay low before seeking out other stewards of the First Song. 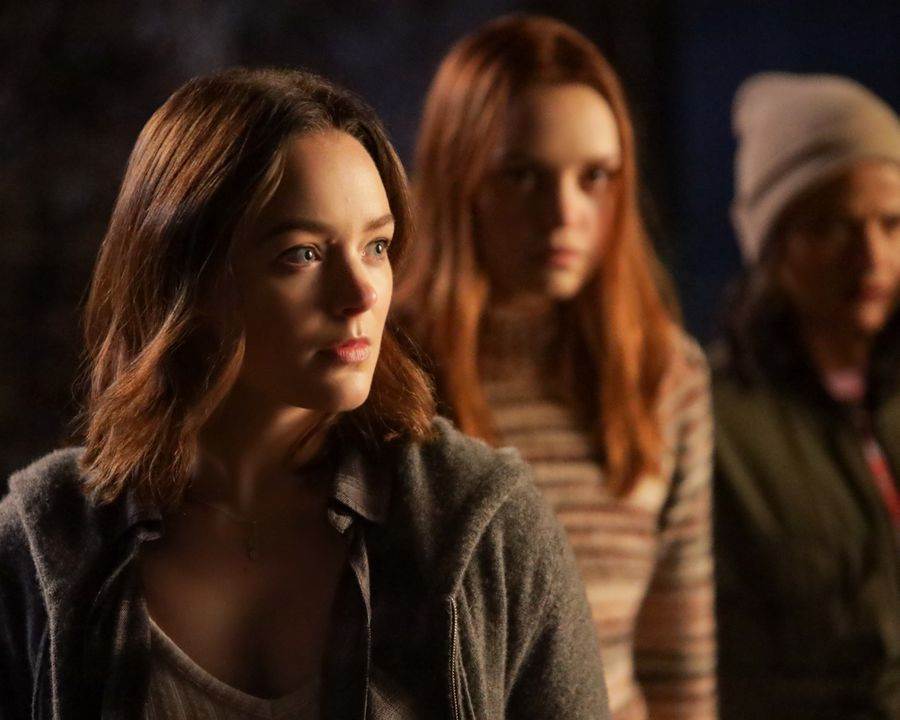 It’s morning at Fort Salem and two cadets are on their way to Mothertongue class. As they arrive at the building their instructor walks out, followed by Colonel Jarrett from the Civilian Oversight Committee. Mothertongue is officially canceled. One of the cadets asks why and Jarrett says he’s here to see that witches are no longer seen as a separate society, and that they shouldn’t have a secret language. The instructor disses Jarrett and crew in Mothertongue then says “enjoy your day.”

In the Cession, Scylla (Amalia Holm) thinks they should tell the Council of the Great River the truth about President Wade, but Tally (Jessica Sutton) says no. Abigail (Ashley Nicole Williams) insists they must prove their innocence. Nicte (Kandyse McClure) tells the group she’ll be leaving them and will sneak out once the wards are lifted. She’s Spree, there’s nothing for her here. Tally asks where she’ll go, she says not to worry about her, “I always land on my feet.” The Council arrives and Scylla informs the others that they're made up of seven language groups each with their own traditions. It’s like a nation within a nation. They tell the gang they'll be summoned shortly.

Following what should have been a fatal stabbing, Sterling Woodlot (Luc Roderique) wakes up strapped to a table with a collar around his neck. Anacostia (Demetria Mckinney) is on the table next to his. She said the good news is she fixed him, the bad news is the Camarilla are going to cut out their throats.

Abigail is growing impatient as it’s been an hour, and the Council has not yet summoned them. Tally takes this time to tell her about her vision of Raelle. She saw Raelle use the witch bomb to destroy everything. Abigail isn’t convinced that’s going to happen. She suggests that perhaps missing Raelle is scrambling Tally’s sight. Even she dreams about Raelle every night. She asks if Tally has ever tested her sight. Has she seen something and tried to prevent it? Tally looks to the future and sees one of the group knock a glass off the table causing it to shatter.

Nicte says brief goodbyes and asks if Scylla is coming with her. She says she is with the Bellwether unit now, her place is with Raelle. “I really hope you get her back,” Nicte states before taking off. The group is finally summoned and Abigail says to follow her lead. Someone bumps the glass Tally saw fall, but this time she catches it. Maybe Abigail is right.

Abigail thanks the Council for giving them the opportunity to prove their innocence. Adil (Tony Giroux) then steps forward and greets each member in their native tongue. They’re impressed. Abigail states that they respectfully ask to be sheltered in the Cession, but one of the members, Thelma, corrects her. They're not here to listen to their plea, they’ve made up their minds. “We’re sending you back to Washington DC.”

The gang wants to know why the Council even bothered meeting with them if they’re already decided. Pauline says they want answers. Why did the group destroy private property (at the chemical plant)? Abigail says they didn’t want to but they had to stop the Camarilla. Thelma isn’t buying it. The Camarilla is a fairy tale. “No,” Abigail insists. They wreaked havoc in India and Fort Salem, “we’re trying to prevent that from happening again.” The Council says they have a treaty to uphold. The U.S. government wants them back for assassinating the President. The Council knows it couldn’t have been them—the group was in their custody—but they want to know why the U.S. thinks they killed Wade. Tally says President Silver is Camarilla, and he even killed his daughter to sow discord amongst citizens about witches.

Two surgeons, a male and female, prepare to perform surgery on Ana and Sterling. The man removes Ana’s collar and puts his knife blade to her throat. She hisses at him twice and he lifts the knife… then cuts her restraints. The female asks what he’s doing but he attacks her. They fight with their tools and kill each other. Ana frees Sterling and says she picked up a thing or two from her time with Scylla. She holds a lighter to the dead man's face and breathes in the smoke.

Tally tells the Council that the great war isn’t coming, it’s already here. She says they can help the Cession fight the Camarilla. One of the Council members suggests to the other that if this is true, sending the group back to the U.S. is a death sentence. They argue amongst themselves and Pauline stands up. It appears the Council is no longer in agreement about extraditing the group. They’ll have to re-vote. Scylla offers another suggestion. She says her parents were dodgers and she spent her youth in the Cession, it was her home. It’s also the home of the woman she loves. “Let us go and help us get out, we’ll leave immediately.” Where would they go? Tally says California.

Alder (Lyne Renee), Khalida (Kylee Brown), and Noodin—three stewards of the First Song—find refuge in a cabin that seems to be laced with purple magic. A young man enters and he looks like the person who was present when Alder arose. He asks if Khalida is a shepherd. She says no. Khalida asks where they are. Alder says it's where she grew up and she brought them here to keep them safe. She says, “It’s the last place where I knew what that felt like.” She tells Khalida the story of her family and home and how her parents were murdered. The young witch sympathizes. Every spring she and Adil would go to the mountains to see snowdrop blossoms. The last time they went they returned to find their parents dead. She didn’t even have time to greve them. We’re survivors Alder tells her. It was only a matter of time before we earned each other's trust.

The Council will allow the group to leave the Cession and even offers to give them what they need. However, there's one condition, none of them can ever return. The ruling applies to Raelle too.

The male surgeon from the operating room walks into a control room where several computers and monitors are set up. He and another man watch a video of the imprisoned witches from the Inauguration dinner. The second man says they’ve picked up more subsonics of the witches' voice/work and that Hearst’s implant is better than their models. The technician says Hearst is a hero to have witch parts put in him. He’s willing to make any sacrifice to rid the world of them. Sterling walks in the room startling the tech and the doctor puts him in a choke hold. With Ana’s voice he says “you’re going to show us the way out.”

As the Council leaves, one of the members says, “You seem like good kids, I was in your corner.” Thelma has been assigned to get the group across the border. Her guards will be back later that night, but they're putting the wards up so no one leaves. Then she collars everyone. A frustrated Abigail leaves the room bumping the table from earlier, breaking a glass. Tally is unsettled.

Abigail and Adil sit in their room discussing their situation. This isn’t a win, she says. Not even close. They did their best and told the Council about the Camarilla, but it still isn’t enough. Abigail talks about training to be a soldier but all she can think about are the people she’s failed to protect. Suddenly she hears a strange noise and follows it into the hall. An intercom speaker beeps and it sounds like Anacostia’s voice saying “I’m gonna get you out.” She and Adil head downstairs. A masked figure walks the hall behind them. Downstairs another figure lies on the ground knocked out, but there’s no sign of Ana. The figure on the floor jumps up and says Anacostia is not gonna make it. More figures enter the room and the group attacks, taking out three Camarilla. They need to get out now. As they call for Thelma, old phonograph music starts playing, and elevator doors open. Alban Hearst (Bob Frazer) steps out singing along with the song, both on and off key. He hisses at them, knocking everyone to the ground. 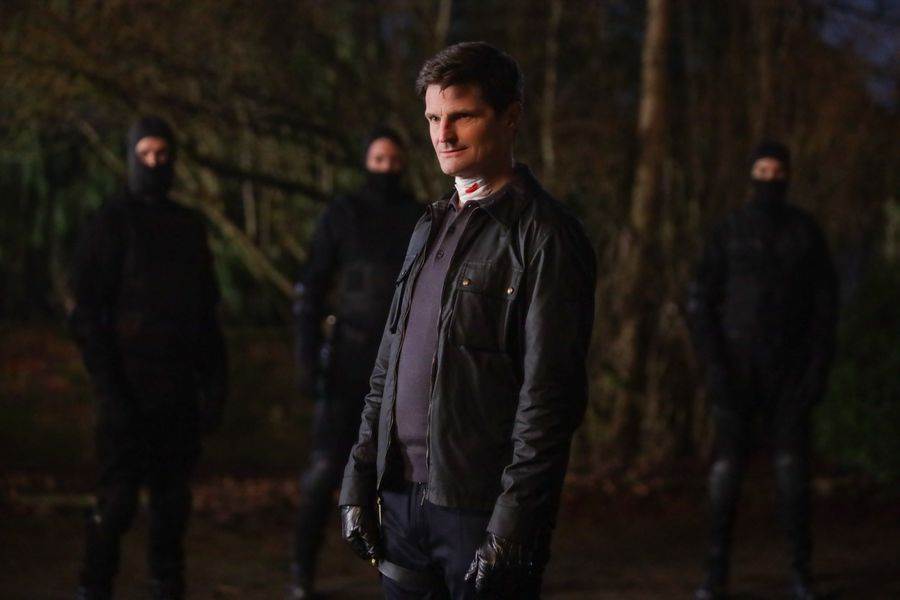 Outside, Thelma arrives and attempts to remove the wards from the door as two masked figures emerge behind her. A bloody knife stabs through the door and Hearst smiles. With his new voice, he asks the group if he can join their club? Adil grabs the mushroom from Khalida, sending purple dust into the air. Abigail says, “let’s hope it works.” Surviving the outdoor distraction, Thelma comes in and dodges Herst’s attack. She hollers at him, and he’s temporarily stunned. She frees Abigail from her collar and the soldier runs after Herst.

In the cabin, purple dust falls on the inhabitants and Khalida says Adil’s in danger. Alder tells the others to stay safe and she will take care of it.

Abigail comes back and says Hearst is gone. Thelma says she believes the group about the Camarilla and the Council will avenge the spilt blood. Just then, Hearst's voice taunts the group, “Sisters, come see this.” A group of masked Camarilla are outside and one is holding Raelle’s dad, Edwin, hostage. Hearst says if they all surrender he’ll let Edwin go. As they hesitate, the man holding Edwin presses a blade to his neck, but before he can attack, tendrils pop out of the earth and take over the guard. Suddenly, Alder is there and then on down the line taking out every guard. Hearst is shocked. It’s not possible! He looks down and the tendrils stop at his feet. He grabs his throat and runs. The Alders start to disappear until only one is left. Scylla goes to Edwin, Tally to Alder.

With the technician in tow, Sterling and Ana (back as herself) come to a room requiring security clearance. The man says it’s the end of the line, he doesn’t have access, but Ana twists his wrist and he opens the door. He tries to push an alarm button, but Sterling is too quick and kills him. They get out, but as they walk away, Ana stops. “We need to know what they’re doing here.” Sterling nods and they venture back in. 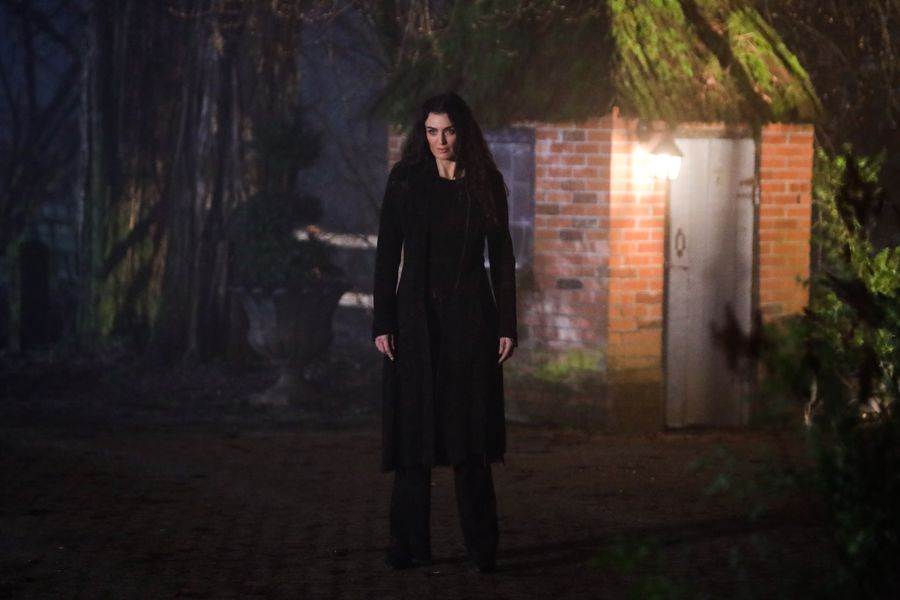 Edwin is going to be okay. He and Scylla catch up and she tells him about Raelle. Thelma asks Abigail if every day is like this. Yep. They’re going to have to fight together, but right now she wants to know how the Camarilla knew they were there? Alder grows weak, the poison on the Mycelium is affecting her. She tells Tally it’s getting worse. Tally asks about Raelle, but Alder passes out.

Ana and Sterling discover a large field where a whole army of Camarilla soldiers are standing at attention. “Goddess,” Ana whispers. A voice shouts out commands and the entire company moves and marches in unison.