This week on Freeform’s Motherland: Fort Salem: with the Marshals hot on their heels, the group splits up. Scylla has no luck contacting Raelle, but the others encounter a surprising ally. In Washington, the President is ready to publicly oppose her VP. Ready? Let’s go! 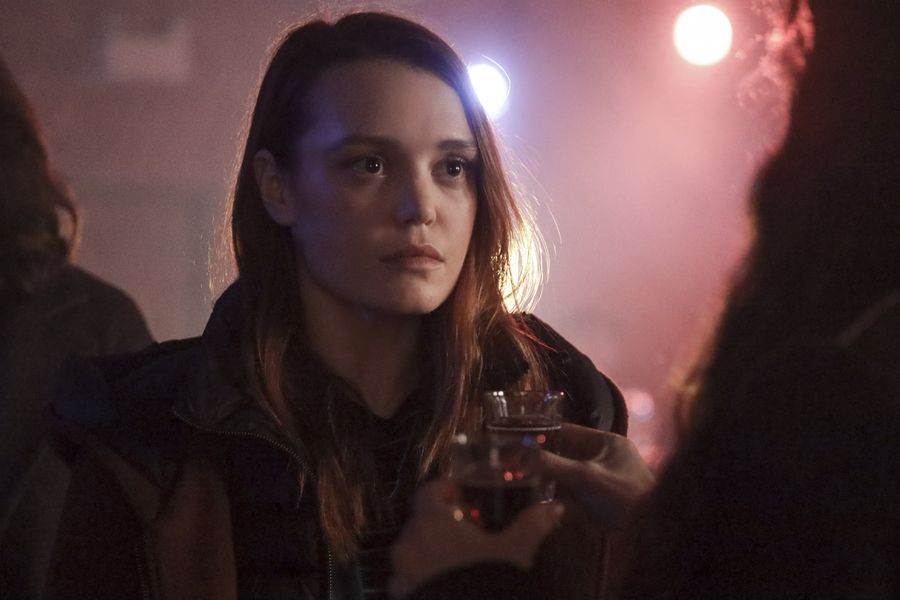 The group is on the run trying to escape the Marshals but they come to a dead end. The only way forward is jumping off a cliff. As they’re stopped, Adil (Tony Giroux) worries because they haven’t found Khalida, he’s going to have to rely on the blood compass to find his sister. Tally (Jessica Sutton) tries looking into the future but her attempts aren’t helpful. With the Marshals getting close, Scylla (Amalia Holm) reveals she has some Silva (a substance that allows the user to fly), but not enough for everyone. She and Nicte (wearing a different face, played here by Kandyse McClure) continue on foot, while Tally, Abigail (Ashley Nicole Williams) and Adil jump off the cliff right before the Marshals catch up. The trio lands safely, and Adil uses the blood compass. Khalida is headed north.

At the White House, knowing she’s on their side, Anacostia (Demetria Mckinney) and Izadora (Emilie Leclerc) tell President Wade (Sheryl Lee Ralph) that her Vice President is working with the Camarilla and had his own daughter killed. Wade wants to address the nation that night and publicly veto his bill about genetically testing for witch ancestry. They warn her she’s already on the Camarilla’s radar, but Wade says she’s not afraid of a fight. An aide interrupts and says someone from the Cession is here about the incident at the chemical plant. The President tells Anacostia to stay.

After arguing about what to do, Scylla and Nicte disguise themselves as men and board a bus for the Dakota border. Sometime into their journey, the bus pulls over and Marshal boards. “How did he find us?” Scy asks. “He hasn’t found us yet,” Nicte says. The Marshal approaches and lets out a whistle revealing their magic. They break a window and run.

The President’s guest is Pauline, a council member in the Cession. She states the Bellwether unit is responsible for the attack at the chemical plant. Yes, the security footage they have is dark, but Vice President SIlver was convinced it was them. He’s even offered all assistance to bring them to justice. Ana requests the Army be granted access to the Cession and promises to personally bring the girls back. Wade gently reminds Pauline that the U.S. and Cession “help each other to flourish.” Pauline agrees with her statement but says not all on the council do. She says they’ll contact the President when they’ve apprehended the girls.

The Blood Compass shows that Khlida is still on the move. Could the Camarilla have her? Abigail asks Tally to look into the future to where Khalida is going next. Tally’s not sure she can, she’s only seen her own future. Abigail suggests looking to when they find her and working backwards, begging Tally to try. She looks and sees a bard called Two Rivers Roadhouse. Her vision takes her inside where a tipsy, happy Abigail tries to hand her a shot. Everything looks blurry then Khalida appears, smiling and says, “Abigail you may want to slow down.” She’s okay.

A bruised Alban Herst (Bob Frazer) shows up late to a meeting with Kara (Emilie Ullerup) and she’s not happy. He seems slightly scared of her as he admits it took longer to get out of the Cession. He says the group caught them unaware, and he has no idea how they knew about the processing (of the poison). “You swore running our operation out of the Cession would be less trouble!” He admits he failed her and the cause. She scolds him before taking off. Clearly upset he yells then makes a call, “prepare the operating room. Bring the top specimen. It’s time.”

Scylla and Nicte have managed to evade the Marshals for now and hide out in an old barn. Scy says they should rest, but Nicte wants to move on. She eventually gives in and Scylla takes the first watch. She sees birds in the rafters and finds one dead on the ground. She prepares to do some Necro work. 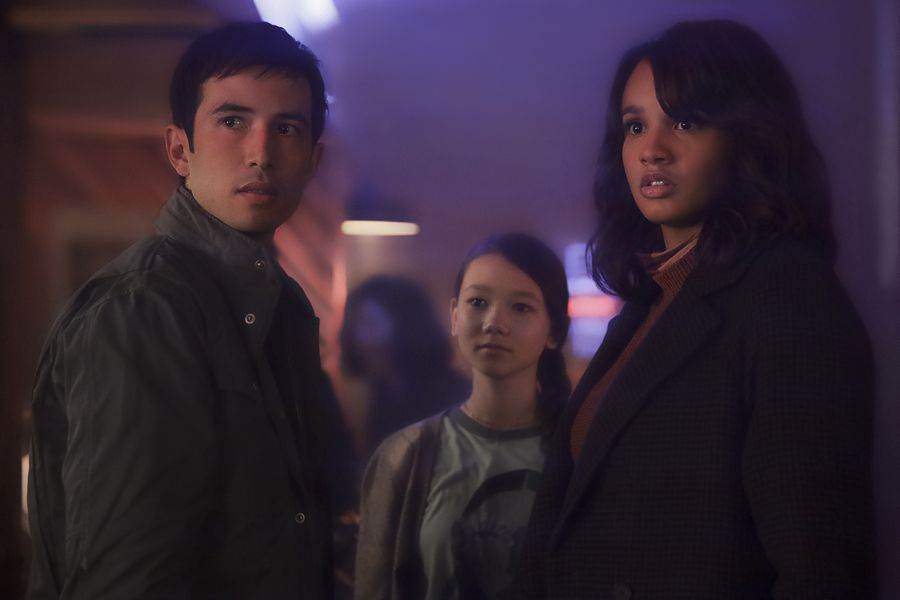 Adil, Abigail and Tally find the Roadhouse and everything is exactly as Tally saw. There’s even a singer, Elayne, scheduled to perform that night. As they look around, they hear Khalida (Kylee Brown) requesting a straw. They run to her and ask what happened. She looks past them and as they follow her gaze, they see a very much alive Sarah Alder (Lynn Renee). Tally especially is shocked and Alder offers them shots, “drink this it’ll make things easier,” before she sits down to enjoy a massive plate of nachos. “How are you here? We saw you die,” Tally declares. Alder tells them there’ll be time for questions, but now is not the time. Still not taking the hint, they ask why bring Khalida here? Just then, Elayne takes the stage and starts singing. Everyone in the bar is really into her song, and Tally shrugs off her coat to join Adil and Abigail in dancing. A strange scratching sound can be heard as she sings, though no one seems to notice. Khalida and Alder watch what’s happening, seemingly unaffected.

Night has settled on the Cession and Scylla is still trying to do work to tap into Mycelium and get in touch with Raelle. The Marshals appear in the distance and Nicte says they followed their vocal signatures. Scylla spots one of the birds and gets an idea to use the birds to distract the Marshals, giving them a different echo to trace.

Elayne has the roadhouse jammin’ and Tally’s having a great time, her mark (haven’t seen since season 1) is glowing! She and Abigail dance and reach for a drink when Khalida comes over and tells them to slow down. As they’re released from the spell, Tally demands that Alder tell her what’s going on. The former General says, “let’s go talk to Elayne.”

Herst has made it back to the lab and is strapped down on an operating table. A terrified teenage girl is secured to a table next to him. She’s gagged and crying. A technician asks if Herst is sure they should go through with this and suggests a “less permanent” option. Herst calls himself the “destroyer of the unclean” and then continues says, “I'm sent in the midst of wolves, undaunted for I’ve become the lion and learned the ways of the beast.” He knows the risks and he’s not afraid. He grabs a scalpel and puts the blade to his neck. The teenager cries out.

Tally and Alder follow Elayne out back to her trailer and Alder asks her about protecting her piece of the First Song. She says she has no idea what they’re talking about. Alder’s eyes change color and she looks scary for a second. Elayne screams and takes off. Alder leads Tally into the trailer and says she’s not concerned with Elayne, but rather the song she stole. As they look around the small space, they see dozens of vessels containing songs. Tally asks Alder how she’s alive. The Mother, the mycelium, brought her back. She says they have to find the pieces of the First Song and it will heal the world. Tally asks about what will happen to Raelle. Will she be okay. In true Alder fashion, she replies, “If it’s the mother’s will.”

Inside the bar, Kahlida tells Abigail and Adil what happened. Alder walked into their camp and asked for help, so she agreed. She says that she and Alder are stewards of the First Song. They both have a piece (of six total) and Khalida knows Alder’s mission is pure. She also refers to Abigail as a sister and says I know you’ll be by our side.

At the barn Scylla sings her seed over the dead bird and a mushroom starts to appear on the body. Not feeling it, Nicte comes over and destroys the work. She tells her searching for Rae is going to get them killed, but Scy is certain it’s because of Raelle that she’s alive. “I’m trying to help you!” Nicte says. Scy sees it differently, “I could have reached her!” Bitch fight. It’s on. No sooner do they get physical then the worst thing happens, a Marshal finds them. Before he apprehends them, he tells Scylla he’s impressed, “it’s been decades since someone pulled something over on me.”

Back in Elayne’s trailer, Tally tells Alder that the Camarilla are after the First Song too. As they search the space, Khalida calls for them and Tally steps outside only to see they’ve been caught by the Marshals. She returns to the trailer but Alder is gone. Tally has a vial—a piece of the First Song?—and pockets it. She emerges from the trailer with her hands in the air.

President Wade is practicing her speech, while a camera crew sets up and checks the lighting. Sterling Woodlot (Luc Roderique) tells an aide that no one is to enter the room but him. M (Ess Hodlmoser) follows him out and he reminds her to check in frequently. He goes downstairs to a control room where Ana tells him everything is ready. She asks him to stay close. She says she hates this part, waiting for the enemies to attack first.

A bartender from the Roadhouse sees Elayne’s trailer door is open. He calls to her and when she doesn’t answer, lets himself in. He finds her dead body on the floor with her voice box cut out.

The Marshals take Scy and Nicte to what looks like an estate and it turns out they aren’t the only ones there. The gang's back together but they’re not going anywhere. This place is secure. They tell the Marshals they never intended to bring trouble into the Cession. “That’s exactly what you did.” As they’re left alone a devastated Scylla admits that she couldn’t get ahold of Raelle. She starts to apologize to the group and Tally and Abigail (!) comfort her.

In the White House, M checks in using Farspeach, but Sterling and Ana are silent. After a few more attempts, she leaves her post only to find the control room empty and blood on the floor. She finds the body of an unknown officer in a closet, voice box cut out. She runs upstairs to the President and calls out in Farspeech that the breach has occurred— it’s the camera crew (again)!

Outside on the White House lawn, a reporter starts their live coverage right as an explosion sets off. Back in the house President Wade lies on the floor in her office, her fate unknown. Glowing red mushrooms fill the room.