Welcome back for another recap of Freeform’s Motherland: Fort Salem. The Bellwether Unit stands trial for the alleged crimes. The Camarilla gain ground in the mission to destroy all witches. 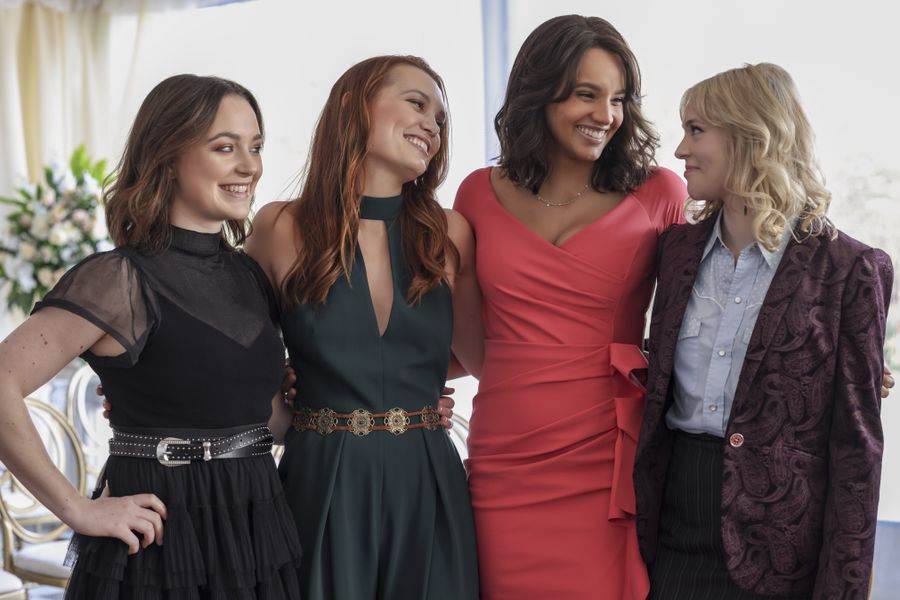 Please note this recap contains spoilers for season 3, episode 9 “But I Don’t Even Have A Dress”

Now that the girls have been apprehended, Petra (Catherine Lough Haggquist) has a few moments with them before they’re taken to prison. Speaking as a mother and General, she says she’s proud of them. Abigail (Ashley Nicole Williams) says this was the only way. Their last free moments aren’t for long, President Silver’s troop is on the way.

President Wade wakes up in a cabin and she’s injured. M comes to her side and says there was an accident. The Marshal was driving, but suddenly veered off the road and they believe one of his Marshals died. M tells her the Marshal’s are connected like Alder was to the Biddies. Wade looks across the room he’s laying down, alive, but hurt. Wade asks about food. M says they have none and only one day’s worth of firewood.

Tally (Jessica Sutton) is led to a cell where Abigail, Raelle (Taylor Hickson) and Scylla (Amalia Holm) are being held. She’s just been interrogated and tells the others she was asked about Petra’s plan, Alder’s return, where Raelle went and the First Song. She’s certain the First Song is important if the Camarilla are doing everything they can to destroy it. The girls notice that the guards are being careful not to leave visible wounds. They assume this means a public trial or worse, execution. Raelle and Syclla tell the others they were planning to get married and ask if Abigail and Adil would agree to a double wedding. Moments later a guard enters the cell with uniforms and tells them to put them on.

President Silver (Victor Webster) and Kara speak with their team and he stresses that he wants to control the narrative during the trial, which will be televised. Kara points out they need to be careful, because they could still lose the war. Ultimately, their goal is to have the Bellwether speak to their crimes so there’s reason enough to execute them, but they must not be made to look like martyrs. Silver and his team aren’t concerned about getting a guilty verdict, they want the American people to fear witches.

The girls are taken to a courtroom and put in a glass box for their hearing. Several camera crews are there and the trial is being broadcast across the nation. Silver’s lawyer starts off saying that the Bellwether unit has committed crimes almost too numerous to mention, but she does bring up killing Penelope and President Wade, aiding and abeting known terrorists, and destruction of private property.

At Fort Salem, Petra, Izadora, and Sterling (Luc Roderique) discuss Penelope. Izadora says she’s not getting worse, but she’s also not getting better. Revealing her publicly like this would only hurt the girls.

Silver’s lawyer questions Tally about calling the Right of Proxy to save Nicte’s life, and asks if she considered what her action meant to the people who suffered at the hands of the Spree.

Trapped in the cave in Germany, Alder speaks to the frozen witch, eventually asking, “should I sing for you?” Before she starts, she says the song could bring the mountain down on their heads. Alder stands and sings her part of the First Song.

Back at the trial, the lawyer asks how they decide who lives and dies, Abigail states that the Army does “everything we can to prevent tragedies.” The lawyer presses further and Abigail declares that Silver is Camarilla. The lawyer makes a motion to strike the statement and Abigail asks the judge if they can speak without interruption. Silver nods to the judge who says one of them can make a statement. They all agree it should be Raelle, she has a foot in both worlds as both a civilian and Army. She starts off by saying that Wade is still alive. She continues adding, this trial isn’t just for them, it’s being used to persecute all witches. She tells of her upbringing and that she didn’t want to join the military, but she spoke the words and pledged her oath, and then her opinions changed. “We are no different than you.” Silver looks at the Judge and signals for him to cut it short. As a guard comes to lead the girls away, Petra enters the courtroom with Wade, Anacostia and Colonel Jarrett. All of this is caught on camera. Silver says to cut the feed then tells Jarrett to arrest them, but he looks at his former boss and says “this is for Penelope.” He calls them imposters and Wade slaps him. She offers to have him check her fingerprints.

An unknown amount of time has passed and President Wade is publicly addressing the nation with M, Thelma and the Marshal by her side. She’s been reinstated as Commander and Chief and announces she’s exonerated the Bellwether unit. A montage shows the Civilian Oversight Committee being removed from Fort Salem, and Silver being arrested.

The girls are back at the base with Anacostia (Demetria Mckinney) and discuss how fortunate it was that Nicte’s bats were able to find M as they were out collecting firewood. Ana asks about who’s handling wedding plans and Abigail says she’s in charge. In the meantime, Raelle and Scylla are going away for some alone time…perhaps to a lighthouse?

Alone on the grounds, Tally touches the earth and sings her newly acquired part of the First Song. Adil (Tony Giroux) hears and tells her it’s beautiful. She’s worried that she sacrificed her sight for nothing and that the song won’t work without every part. They’re interrupted by Gregorio, who has just been released from prison for being associated with the Bellwether Unit. Tally apologizes for his suffering, but he says it was a badge of honor.

Raelle and Scylla are finally alone at the lighthouse—temporarily away from the madness, and happy to be together before their wedding. At Fort Salem everyone is getting ready for the wedding. Raelle and Scylla are back and greet Nicte Batan (Kandyse McClure) who happens to be in the neighborhood, she’s going to stick around for the fancy food. Quinn and Edwin show up and he tells Scylla in a few hours she’s going to have to start calling him Dad.

Sterling and Ana walk the grounds and she shares her anxiety, “there’s still a threat. I can’t help but feel it.” He agrees and tells her “tomorrow we hunt it down, today we celebrate our friends.” She’s grateful to have him with her and he promises he’ll always be around. As they’re talking, Alder and Khalida arrive. Alder explains that Khalida heard her singing and literally moved a mountain to get to her. Alder says Khalida might be the strongest witch. An emotional Ana embraces the former General.

Gregorio and Adil are adding the final touches to their wedding looks and Adil cannot figure out his tie. Gregorio helps him but they’re interrupted by Khalida who happily greets her brother.

Abigail is running over the final wedding details when the girls tell her they have an addition to the guest list. She sighs, but turns around to see Khalida. “Did you miss me?” Khalida asks. “More than I can say.” Now that everyone is back together, Scylla and Raelle ask for a double wedding. “It's what we want,” they insist. Adil points out their whole family is here. There’s one problem: Abigail doesn’t have a wedding dress. The girls tell her to go see her grandmother. 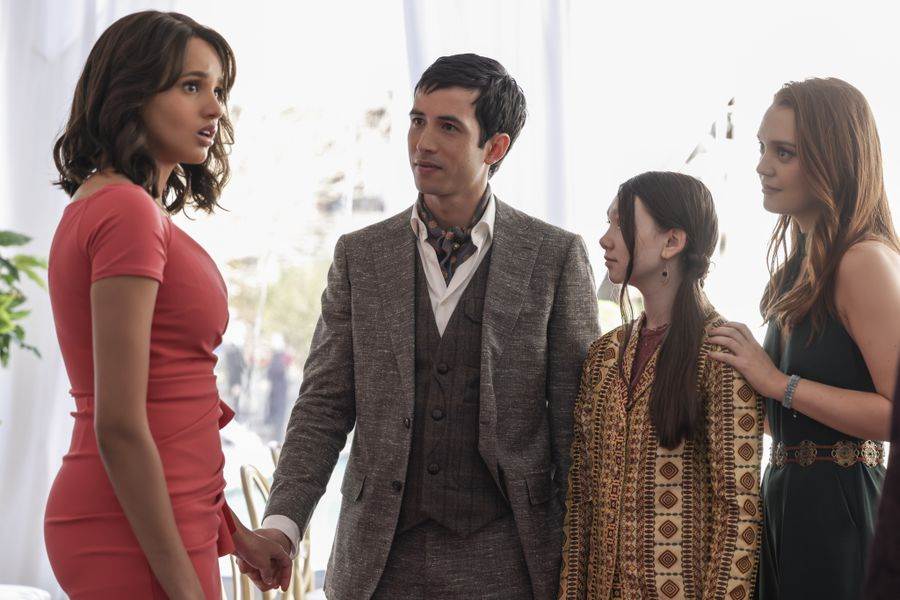 Grandma has a vintage family wedding gown all ready for Abigail. She says it’s beautiful and wonders why she’s not seen it before. Minerva says she has and once as a child put it on. Minerva mentions how so much of the history has been taken from them, but this dress remains. She says she cherishes it, just like she cherishes Abigail.

Tally approaches Alder, who isn’t staying for the wedding. She’s going to Africa to continue her search for the First Song. Tally wants to go, but Alder says she should celebrate with her family while she can.

Edwin escorts Raelle down the aisle followed by Petra and Abigail. President Wade is waiting at the altar to perform the ceremony. A montage shows the couples reciting their vows as two new unions are formed. After the ceremony  everyone celebrates with food and dancing. Wade sees Nicte at the bar and approaches and expresses thanks for helping in her rescue. She remains stern and says “there are things you have to answer for. Your day of reckoning is coming.” Nicte says she won’t run and everything she did was meant to save witches. Wade understands but says a pardon is off the table.

Tally and Gregorio slip out of the party and have their own little celebration in a private corner.

Raelle and Edwin talk about Willa and how proud she’d be of her daughter. He says he can’t be mad at her for leaving, she was just trying to protect Rae. Raelle disagrees, they can be mad at her, “she did a terrible thing to us.” But she suggests they both have to figure out a way to forgive her.

Abigail, Minerva and Petra approach the painting of their ancestor Jem. Abigail says maybe the portrait will finally speak to her. She tells Petra that ever since she tried Jem’s work she felt something growing inside of her. She felt it on the airfield and in the Cession too. Petra mentions the Razor Hail and says no one in the family has ever done that. But Abigail isn’t so sure. Just like Minerva said so much has been taken from them. Why else would the Camarilla hunt their family? Petra says they’re afraid, but through it all one thing they could never take was their work.

Silver is lying in his cell when suddenly the guards are tossed in the air by work. It’s Alban Hearst and a crew of Camarilla. They unlock the cell, “I hope you’re feeling rested Mr. President. We have a lot to accomplish.”

The newlyweds and their friends (Ana, Sterling, Tally and Gregorio) sit around a campfire enjoying each other’s company. They ask if Tally knew any of this was coming and she says no, but it was a nice surprise. Abigail pulls out Raelle’s guitar and the group asks her to sing. She obliges but focuses her attention on her wife.

Two soldiers are stationed at the gates to Fort Salem. All is quiet but they expect things to be busy once troops return from the Cession. Without warning, the wards lift. They call to the other gate, but no response. They sound an alarm. Inside the lab, Izadora grabs her scourge and finds a place to hide. She motions for Penelope to get down. The door bursts open and Hearst and several Camarilla walk in. He sees Penelope and just stares at her through the glass. Izadora attacks without work fighting hand to hand. She holds her own at first, but eventually one of the Camarilla overpowers her and cuts her throat. As she lays gasping for breath, Hearst opens the door to the Mycelium wall, “Hello. Mother.” he whispers.

Back at the campfire, the group senses something is wrong and Ana picks up a message. “Fort Salem has fallen.” Raelle walks away from the group then stops. Tally calls her name but she doesn’t respond. They’re back Tally says and Raelle’s eyes turn icy blue as blood pours from her mouth.