We’re back for another recap of Freeform’s Motherland: Fort Salem. The Spree leader Nicte Batan has been captured, but this victory could mean the end of things for Alder. Meanwhile, Scylla discovers a new skill and Raelle learns more secrets about the Mycelium. 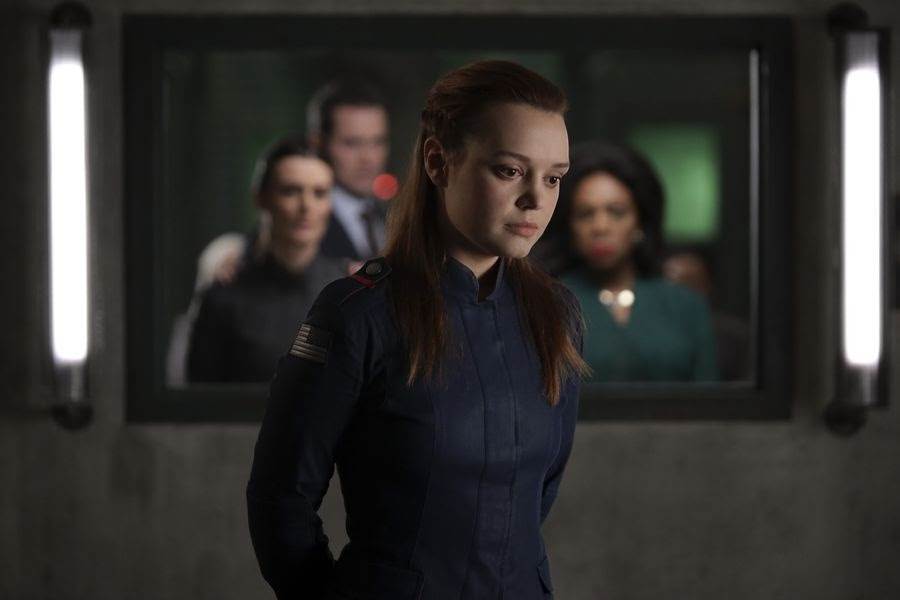 Please note this recap contains spoilers for season 2, episode 9 “Mother of All, Mother of None”

Vice President Silver and President Wade arrive at Fort Salem and are greeted by Alder. She’s surprised they’re both here as Petra didn’t warn her the Commander in Chief would be present for the interrogation. Nicte is cuffed and being held inside a cell as Alder, Petra and their guests watch. A witch in the cell with Nicte attempts to link with her and read her thoughts, but she catches on fire. Nicte blasts her backwards and the woman is reduced to a pile of ash. Nicte agrees to tell them what they want to know, but she’s going to use her voice. She has one condition, Tally Craven needs to be the one asking the questions.

Officially home from their fall “break,” and with their long journey behind them, the trio drinks with Anacostia and enjoy a few moments of peace. Raelle thanks Anacostia for whatever she and Scylla were doing that led her back to her mother. She toasts to Anacostia who toasts to Willa. The group is interrupted when Petra says Nicte wants to speak to Tally. Abigail says they're coming too, but Petra stops her. Tally assures her unit she’ll be fine.

Kahlida is meditating in her room, when Adil returns home. She’s happy to see him and asks where he’s been. He tells her he was making the world a safer place. She picks up on the fact that he’s killed someone and determines that he liked that power. She says violence isn’t the way, but he argues that sometimes it’s the only way. He tells her the Camarilla were holding girls her age in cages and that they’re taking witches' voices and using them as weapons. She says they should stay silent even if it means their people die. And peace will die with them. Angrily, she yanks the vial of her own blood that he wears from his neck.

Raelle calls Scylla who tells her that Edwin is really good with Tiffany and that Quinn is trying to find the girl a new home. Scylla asks if Edwin knows about her past and Raelle says he knows not to ask too many questions. Scylla looks out the kitchen window and black raven with a white chest approaches the glass. Scylla tells Raelle she thinks she’s made a new friend but doesn’t elaborate. 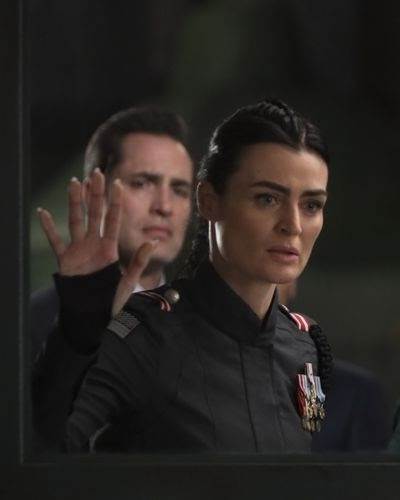 Petra brings Tally to the integration and Alder gives her the chance to opt out. But Tally is firm and says she thinks they should hear what Nicte has to say. She enters the cell and steps on the ashes of the last witch. She starts asking questions, but Nicte isn’t giving her much. She tells Tally there’s a tenacity in her that Alder has marched out yet and that she’d be better used serving the Spree than civilians who want her dead. Tally says that civilians might like witches more if the Spree stopped killing them.

Nicte asks how many witches die in military engagements every year and to run those numbers against the Spree civilian body count. Tally reminds Nicte that she’s there to ask questions and to start giving answers. Nicte says she asked for Tally because she’s interested in the truth. Alder doesn't like this and tells Tally she's dismissed. Tally kneels down to Nicte’s level and asks how many died in the first Spree attack. Nicte says one for every one of Esterbrook’s rebels that died in Liberia. Tally states the rebels killed themselves. “Because General Sarah Alder forced them,” Nicte says. Alder used her work without telling her against innocent people, then Nicte used that same work to start the Spree. President Wade turns to Alder and asks to have a chat about the General’s future.

In Alder’s office President Wade recounts Alder’s 300+ years of service and the sacrifices she’s had to make. Alder stands by her tough decisions and lives she’s saved. Wade points out she also led to the creation of the Spree. Wade asks about the other things she’s done such as sending untrained cadets into a battle with the Spree, “puppeting” the President and later “pushing” her to open witch testing centers. She tells the General now that she’s successfully captured Nicte Batan she’ll step down as military leader with distinction. Alder is visibly upset by this order. 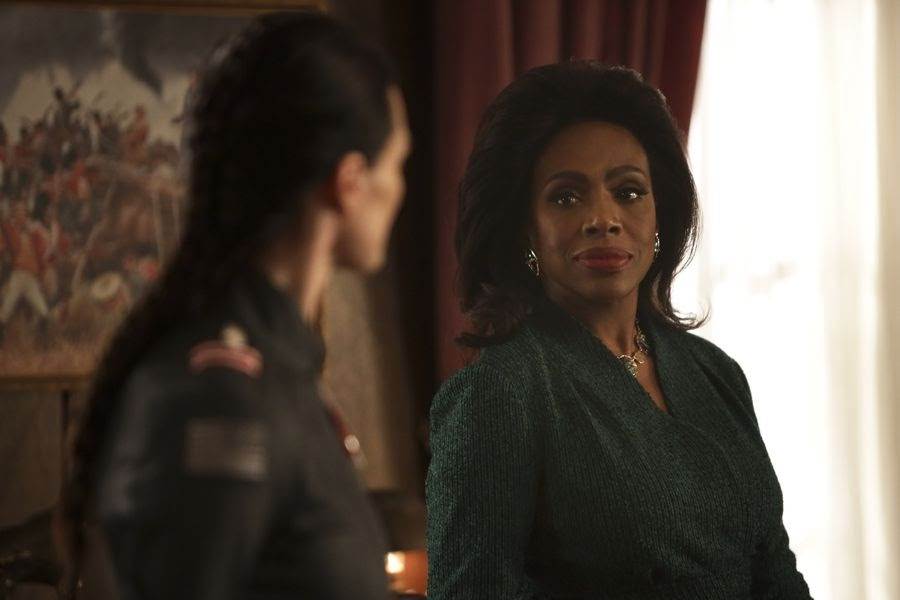 Raelle shows Abigail the Mycelium wall and Abigail asks if she can touch it. Raelle says it’ll stop her if it doesn’t want to be touched. Abigail sticks out her hand and the Mycelium reaches back, but before they can connect, Izadora walks in. She tells the girls this is a confidential project. Raelle says she was sent for and figured that Abigail deserves to know where the witchbomb comes from. Izador gives Raelle a file that says she’s being taken off active duty, her talents are needed elsewhere.

Temporarily back together, the trio walks the grounds and Raelle says her new assignment is to travel the country and stop at different testing centers, talk with the press about recruiting future witches. The girls tease that she hardly seems like the poster child for conscription. As they joke they see a cadet crying and others gathering in groups. They ask M what’s going on and she tells them Alder is stepping down. Tally asks why. M says they brought in Batan and Alder is leaving on a high note. Tally says that’s not the whole story.

Tally goes to see Nicte and tells her Alder is stepping down. Nicte knows. It’ll be right after her execution. Tally’s upset that no one will know the truth. Nicte tells her her death will inspire new Spree and that at least Alder’s not calling the shots anymore. She sees that as a win. She tells Tally to find something to live for, that this isn’t her story. Tally is frustrated and there’s nothing she can do, she wants to change the system and she tells Nicte they have to stop fighting each other and focus on the real enemy before it's too late. Nicte says that will never happen.

Petra meets with Alder and briefs her on what’s going to happen after Nicte’s execution. She’ll assume Alder’s role as General. Alder asks about the Biddies and Petra says they’re retiring that program. She asks Sarah if she knew what she was doing when she undercut Nicte. Alder says not at first but then it was advantageous to have a common enemy to fight instead of each other. She holds back tears as she tells Petra she doesn’t know what she’s in for. Alder talks of her history, the 28 intelligence commendars she’s appointed, the battles she’s led, all the horrors she’s seen. She calls Petra “ambitious” and “foolish.” Petra replies that she’s human and she thinks Alder forgot that is too.

Ahead of the execution, Tally is frantically searching through books when she’s approached by Penelope Silver and her unit. All three are eager to start Basic training. Penelope approaches Tally and says the execution is weird and that there hasn’t been one in 200 years. Tally says it’s really quite something. She turns back to her books and comes to a page and section about “Right of Proxy.”

Abigail comes to congratulate her mother on the new position. Petra graciously accepts then tells Abigail to return to class. Abigail says she’s not going, she’d rather be on the front lines in the fight against the Camarilla. Petra says she’s not letting her daughter skip her training asking how that would look. Abigail says it would look like she’s acknowledging the true threat. Abigail then gives her the voice box she took of the Camarilla who killed Charvel. Petra asks what Abigail needs to get started on her new mission.

Raelle goes to see Izadora, but she is in the middle of teaching. Raelle hears something and goes to the Mycelium. It holds out a hand, a physical hand. She takes it and it turns to flesh, then her mother’s face appears and the two are no longer in the basement. Willa says she wants to show Raelle how the Mycelium came to be. Raelle looks around and sees dozens of bodies tied to posts, burned to death. Then she sees Alder. Willa says the General had helped the British keep their enemies at bay and when she returned her whole family and people were destroyed by the Camarilla. Alder starts to sing a song of grief and the bodies disappear. Underground are skeletons and the fibrous, pulsing Mycelium. Willa says Alder built Fort Salem on this very spot so she’d never forget about “Us.” “The Mycelium is dead witches” Raelle realizes. She asks if this is where they go when they die. Willa tells her witches live on through the Mother who lives on through Raelle.

In the Cession, Edwin and Scylla are at diner and Quinn is introducing Tiffany to a family of Dodgers. Scylla asks Quinn to go for a walk, she wants to show her something. In the town people are going about their daily lives when a bird flies overhead and screeches. Everyone stops what they're doing and as if in a trance, turns to their neighbor and starts dancing in perfect synchronization. The bird flies down to Scylla and Quinn asks what she calls that. “Morrigan's Whisper.” And it seems like she has an idea on how to use it against the Camarilla.

Nicte’s execution is at hand and the president and military have gathered to be witnesses. Alder addresses the group and says she takes no delight in ending the life of a witch. She calls Nicte a murderer and then pulls out her scourge to strike the Spree leader thrice. One for the heart, one for the head, and one for the soul. As she’s about to attack, Tally screams “stop!” She speaks to Alder in Mothertongue invoking Right of Proxy— offering her life in place of Nicte’s. Alder hesitates and Tally attacks. The women fight until Alder is about to take Tally out. Now Raelle calls Right of Proxy for Tally, followed by Abigail, Gregorio and M. Alder stops. Raelle calls out Nicte’s wrongs and that she should be punished, but not this way. Anacostia approaches Alder who nods and then apologizes for leading the military to warring with the Spree. A humbled Alder turns to Petra and hands in her medals and markings. Nicte will live another day.

The trio, Adil and M are riding high on what happened. “Did we just change the world?” Raelle asks. The group is in good spirits when suddenly the power goes out and an alarm sounds. Someone runs in calling for a Fixer and the group heads outside where a cadet is choking. Raelle steps close and then pauses. The cadet is getting worse and Raelle tells everyone to run. The witch collapses to the ground spitting out the Witch Plague.