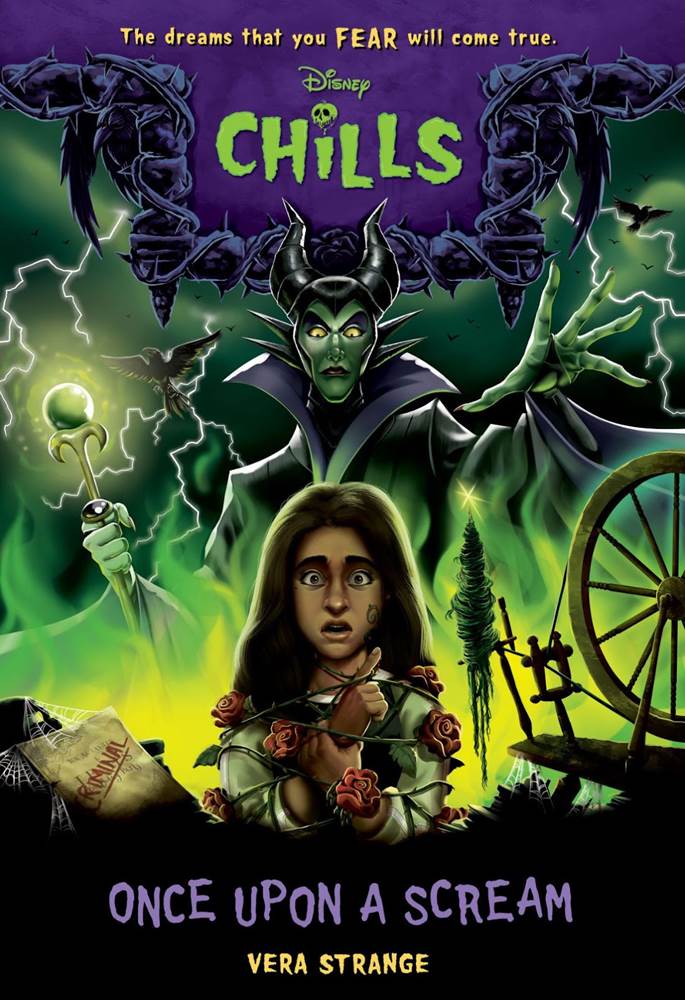 What is the Disney Chills series?

Disney’s answer to R.L. Stine’s Goosebumps – namely, the Disney Chills series – has been successfully spooking us since the first book, Part of Your Nightmare, dropped in early 2020. Since the debut of book one, Disney and author Jennifer Brody (under the pen name Vera Strange) have rapid-fire released several subsequent novels in the series. We have been keeping our nightlights on thanks to book two (Fiends on the Other Side), book three (Second Star to the Fright), book four (Be Careful What You Wish Fur), book five (Liar, Liar, Head on Fire), and now book six, Once Upon a Scream. We had better keep some backup lightbulbs handy because these Disney Chills books keep on comin’.

What is book six, Once Upon a Scream, about?

Dawn misses the big city. Torn away from her favorite place in the world and shipped off to live with her two cooky aunts in the countryside, Dawn is miserable in her new life. While her parents see this as a chance for her to be away from the bad influences that kept getting her into trouble, Dawn sees her new dumpy town of Castletown as a sticky and smelly prison with way too many bugs. But no one seems to care what Dawn wants, so she’s stuck helping her aunts in their dusty antique shop and finishing the year out in a new school filled with mean girls. One day while cleaning some of the junk in the shop, Dawn accidentally pricks her finger on a broken spinning wheel, awakening none other than Maleficent. In exchange for keeping the spinning wheel safe, Maleficent will make sure Dawn’s remaining time in Castletown is smooth sailing. But as kids from her class start coming down with a mysterious sleeping sickness, Dawn starts to realize there is more to this deal than she imagined. And it’s going to take more than just a dream for Dawn to take on the Mistress of All Evil.

Dawn’s story is “dark Disney” at its finest

Where to begin with all the things I loved about Once Upon a Scream. First, there are so many Sleeping Beauty easter eggs in this story that I lost count. Not only are they a great homage to the classic film, but they are also included in a way that cements Strange’s reputation as a wickedly talented, exceedingly creative, writer. They go beyond simple chapter names and add critical elements to Dawn’s story while simultaneously providing fan service to lovers of Sleeping Beauty.   Second, this story is almost like an unofficial sequel to the film. It takes place long after the 14th century in which Sleeping Beauty is set and operates as a modern-day “part two”. Dawn learns about the film’s events via books, tapestries and her friend, Philippa – and Philippa’s dog, Samson. (A charming nod to Prince Phillip and his horse, Samson. Isn’t it great?)   Third, Once Upon a Scream is an ode to book nerds. Philippa’s love of books and fairytales assists immensely in Dawn’s quest, and Dawn expressly acknowledges that “book nerds really are the heroes.” This was another part of the story where Strange cultivated the traditional Sleeping Beauty fairytale in a different way while introducing us to a new chilling adventure. Plus, I found this heartwarming and endearing, and as if Strange reaches through the pages and thanks her readers directly via storytelling. An in-story shoutout. Brilliant.   Fourth, like earlier books in the series, the protagonist is not a reimagined Disney princess. Dawn is no princess and is very much her own person: a fiery teen who has been grounded for shoplifting after, according to her parents, falling in with the “wrong crowd.” Such grounding consists of being sent to live with her aunts Fleur and Aunt Merry (again, fabulous, isn’t it?) until the year’s end. Interestingly, the school bully in this story is the one who takes on the physical Princess Aurora traits, perhaps educating young readers that looks aren’t everything and things are not always as they seem.   Fifth, the spook factor is ever-present and there is no getting used to these alarming endings. There is a lot going on and no one envies Dawn. Nightmares, mazes, crows, curses, thorns. Oh yes, and a famous dark fairy that turns into a dragon. While not quite as unsettling as prior books, the ending to Once Upon a Scream remains intentionally disconcerting. Despite fans of the series living through five Disney Chills novels to date, they don’t get more comfortable. After all, this is no fairytale.   Sixth, the underlying themes of Once Upon a Scream (and the other books in the series) are important. Dawn learns from her mistakes and grows throughout the story. “But like some things in life, the past could not be undone. It could only be endured and maybe, one day if you were lucky, righted by your future choices.” Such messages encourage readers to recognize that we are more than the worst thing we have ever done and that there is always room for improvement. While Dawn’s fate makes future choices a little tricky for her, readers should factor such sentiments into their own happily ever after.   Thus, Disney Chills reaches new heights in the multilayered, antithetical fairytale that is Once Upon a Scream. Readers will not want to sleep on this one.   Once Upon a Scream was released on August 2nd, 2022.
Halloween 2022 coverage is presented by shopDisney