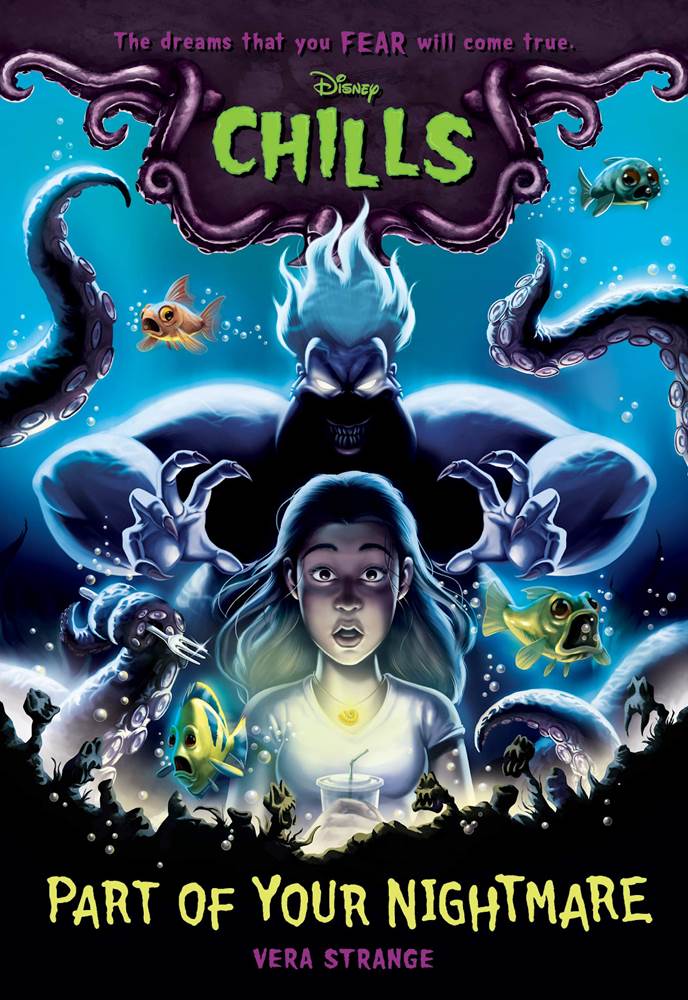 Do you love Disney Villains and scary stories? If the answer is yes, then Disney Chills is the book series you’ve been waiting for. This middle-grade chapter book series premieres on July 7th with the first book, Disney Chills: Part of Your Nightmare. From author Vera Strange, the series promises that “The dreams that you fear will come true.”

Shelly is an eleven-year-old living in Triton Bay whose divorced parents own and operate the local aquarium. Shelly has a hard time making friends at her new school and believes that if she can become the fastest swimmer on her swim team, the skill will advance her popularity. But when the opportunity to make a wish presents itself, Shelly learns the hard way to “Be careful what you wish for.”

A glowing nautilus shell that Shelly finds becomes an unexpected portal to an underwater lair where the sea witch Ursula from The Little Mermaid is scheming up a way to get her hands on the Trident. Ursula grants Shelly’s wish to become the fastest swimmer, but just as she did to Ariel, the terms of the deal are stacked against her. What’s worse, Shelly finds herself in a position where the entire world could end up in danger if she complies with Ursula’s demands.

This premiere entry in the Disney Chills series was a nostalgic read for me, reminding me of a childhood obsessed with R.L. Stine’s Goosebumps series. This series reads like an homage to the Scholastic classic while marrying it with the Disney Villains we love to hate. The well known characters will serve as a great entry point for kids and while the book definitely has a creepy factor, there’s nothing that should downright scare the target audience inside it.

Kids won't have to wait long for a follow up, with the second and third books in the Disney Chills series spaced three months apart. Disney Chills: Fiends on the Other Side is scheduled for release on October 6th starring Dr. Facilier and Second Star to the Fright with Captain Hook will arrive on January 5th. There’s no better time to start this new series that will keep kids turning each page to find out what happens next. Disney Chills: Part or Your Nightmare will be released on July 7th from Disney Press.