Between getting a first look at Annecy and interviewing the cast at San Diego Comic-Con, I was skeptical that there would be anything new to learn about Disney Channel’s new animated series Hamster & Gretel during their D23 Expo presentation. I was wrong. The panel not only included two voice actors who weren’t at the previous two events (Thomas Sander and Karina La Voz) but also had the benefit of following the show’s August 13th premiere, so the audience Q&A was a lot more specific this time around. Here is a recap of what I learned during this hilarious panel. 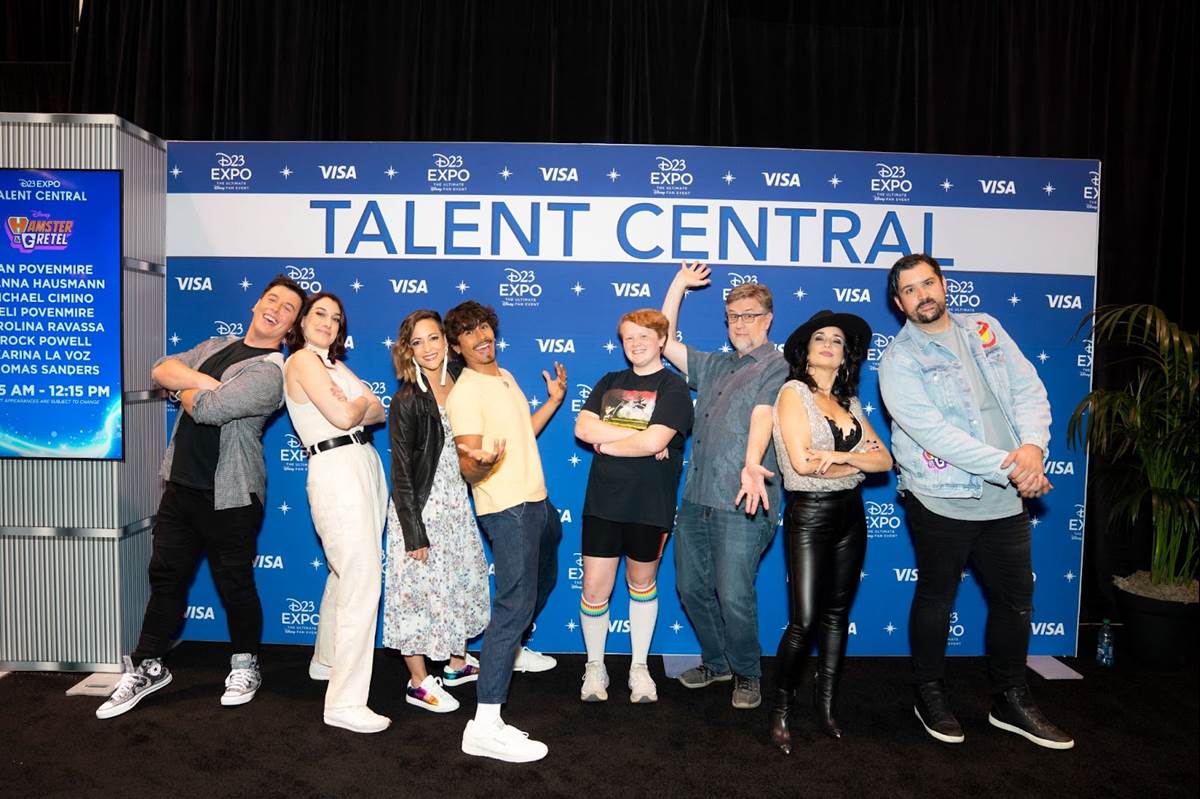 Moderating the panel at the Anaheim Convention Center was a bit of a homecoming for Brock Powell, who voices several characters, including Lyle (aka FistPuncher) and Big Baby. 15 years ago, he was working in entertainment at the Disneyland Resort. It became a full-circle moment later in the panel when Dan Povenmire was asked about having his characters represented in Disney Parks. He said that one of the coolest moments of his career was when he signed off on an event called Phineas and Ferb’s Rockin’ and Rollin’ Street Party at Disney California Adventure. He remembers getting an email saying the show had debuted and that he could stop by to see it anytime, but he was so busy that he forgot about it. About two months later, he was at the park with his family and suddenly remembered that there was a show based on his work. He kept it a secret from his family and surprised them with it. He remembers hugging his wife, who was tearing up at the sight of Phineas, Ferb, Perry the Platypus, and the Fireside Girls represented in the Happiest Place on Earth (Click here to watch a video of the show from 2011). Getting back to Brock, he was a performer in the show when it ended its run in 2014. Dan and Swampy went back to celebrate the show’s long run and met the aspiring voice actor, which led to their working relationship.

“I’ve never played a vegetable in my life,” joked Karina La Voz, who voices La Cebolla, which translates to “The Onion.” Dan Povenmire met Karina on a flight once and, recognizing that she was Venezuelan, introduced himself because his wife is Venezuelan. Karina revealed that she was a soap opera actress and was Venezuela’s biggest pop star in the 80s and 90s. It turns out that Dan’s wife was a fan of hers, joking that it was the equivalent of asking his wife if she had ever heard of Madonna. Creating characters with showrunner Joanna Hausmann, La Cebolla gave Dan the opportunity to write his first tango to introduce the character, which was also Karina’s first time recording a song in that genre. We were treated to the character’s introductory song from the episode “La Ballad of La Cebolla.” 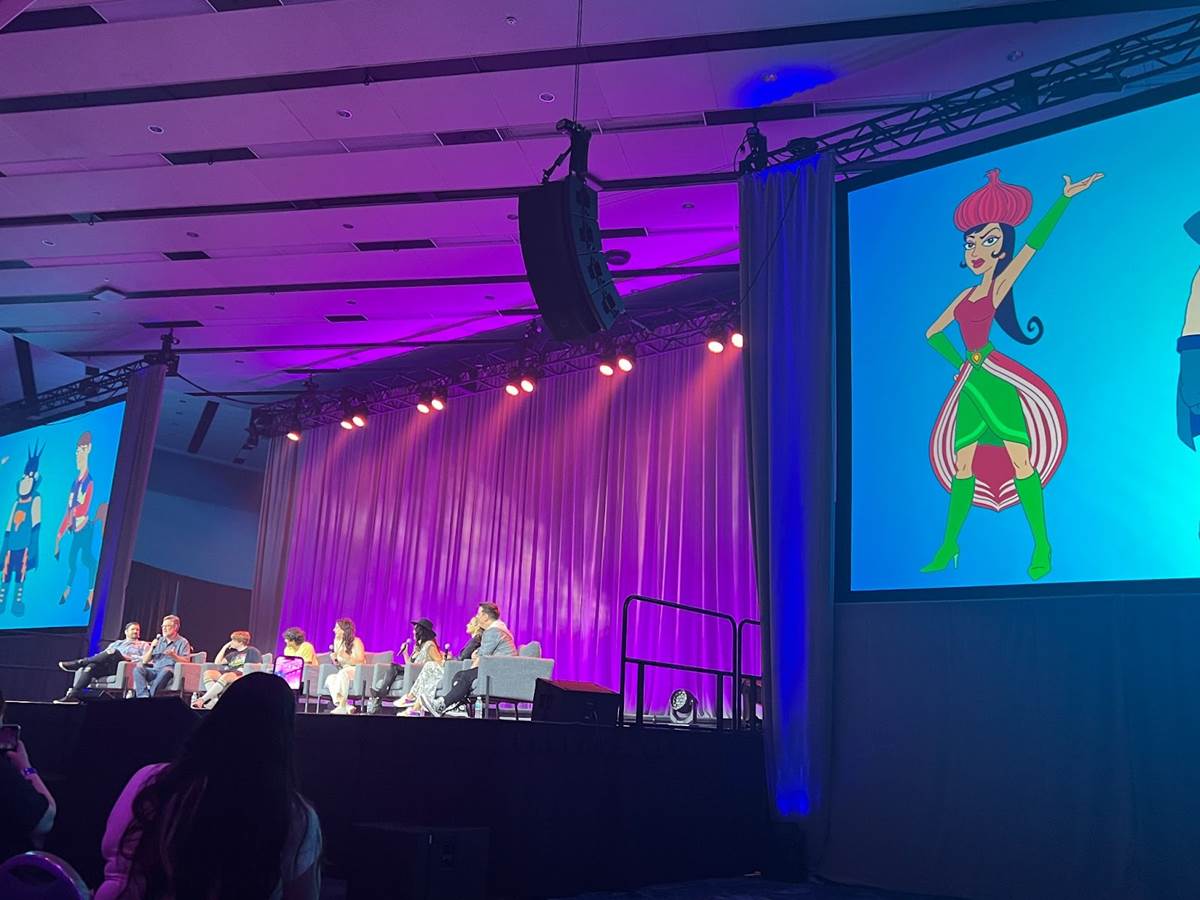 Thomas Sanders is a Florida-based voice actor who has always wanted to be a Disney Villain, so voicing Neighslayer is a dream come true. He landed the role on a Zoom audition when he was asked to do a menacing laugh as a half-horse/half-human and nailed it. Mele Povenmire, who voices Gretel and is Dan’s daughter, shared her love of engaging in a rap battle with Neighslayer, a workaround for Gretel’s promise to her brother not to get in a physical fight. We got to see the musical clip from that episode as well, titled “Neigh it Ain’t So.”

We also got a tease at what’s to come in the rest of the season, which was extended. Fans of Hamster & Gretel will learn what the aliens have been up to, the ones who gave Gretel, Hamster, FistPuncher, and La Cebolla their powers. As of now, the only people who know that Gretel has powers are Hamster and her brother Kevin, but Dan also revealed that someone else in her life will find out about them. But they weren’t dropping any hints as to who, so you’ll have to tune in to find out. 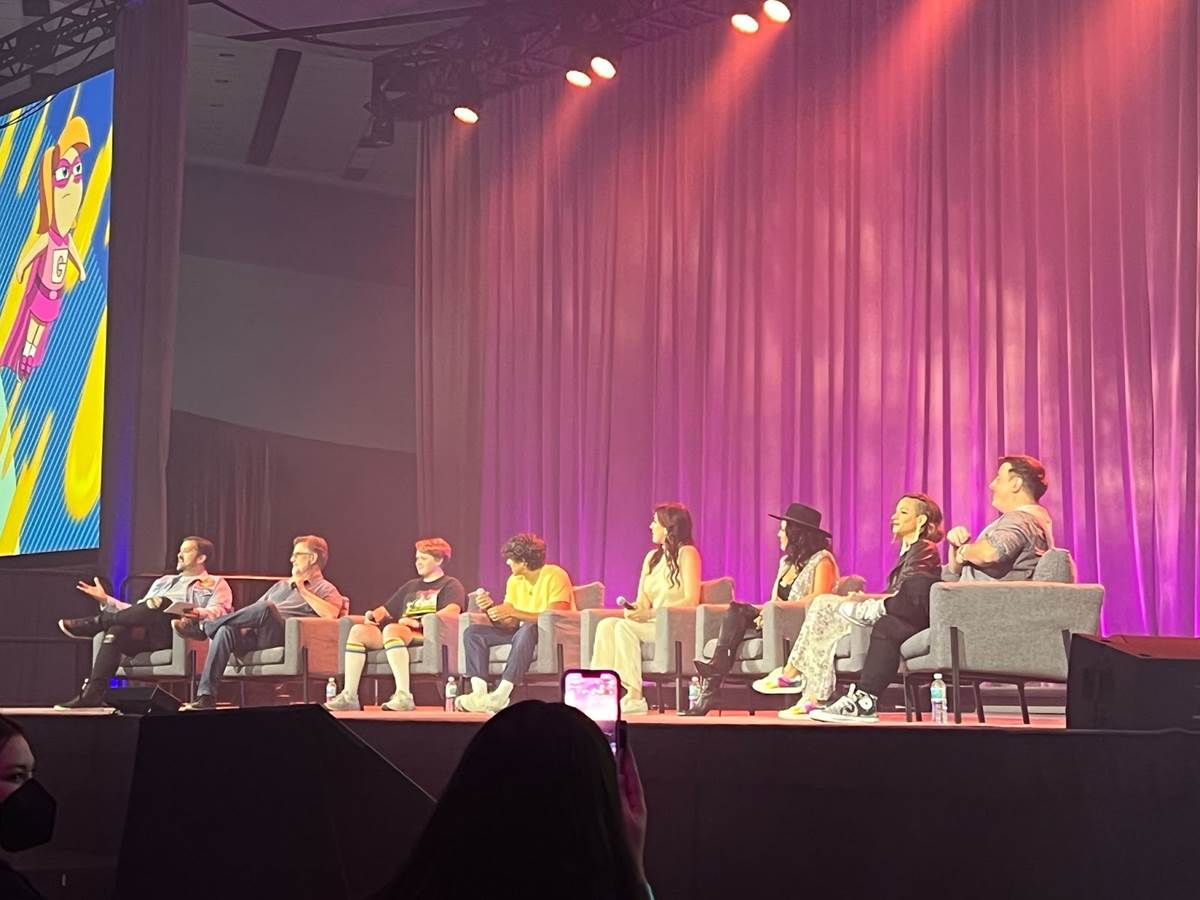 As an added bonus, I got to interview Dan Povenmire and Jeff “Swampy” Marsh, the co-creators of Phineas and Ferb and Milo Murphy’s Law, on the red carpet before their appearance in the Disney Branded Television presentation. While they didn’t have any news to share about future Phineas and Ferb projects, they were hilarious to talk to. And you can see their performance in character as Dr. Doofenshmirtz and Major Monogram below.