This week’s Hamster & Gretel sees an honorary member added to their crime fighting team while also taking on a supervillain with a pretty useless ability of her own. 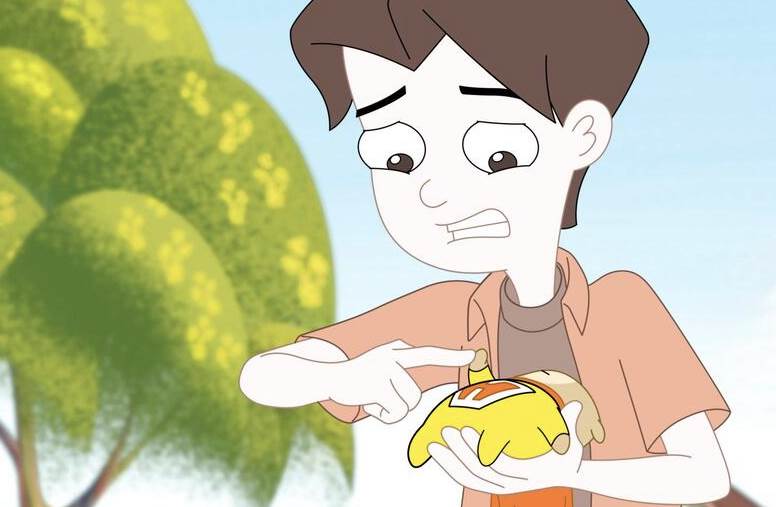 A string of bank robberies is taking place throughout the city, and Fred and Kevin figure out through many of the moves that the culprits use that they are cheerleaders. Too bad their skirts also reveal their color scheme, and they are traced back to students at their high school. That was easy enough. And luckily, there are cheer tryouts tomorrow, so Fred is being sent undercover to join the cheer squad to gather more evidence.

Turns out Fred used to be a cheerleader and was really into it, until she was told she had to smile, in which case she quit. Kevin also takes the opportunity to spend some more time with his crush, Hiromi and goes shopping for an outfit while back at home, Gretel and Fred are diving deep into their favorite anime, Yuko Cheerleading Warrior Attack.

It’s time for the cheerleading tryouts, and the coach sounds an awful lot like Community Sue from Big City Greens. Fred auditions and wows everyone with her skills, including a physics professor who is also explaining everything to Kevin. She’s in, and has to learn a super complicated routine by tomorrow afternoon, which gives her the chance to question all the other cheerleaders about their interests…in crime.

Fred, Hamster, and Gretel are going through the lockers in the locker room when the coach and rest of the cheerleaders come in. They hide in a nearby office where they can still see everything and find out that the coach’s whistle is a hypnotizing device and plan on taking over the whole town.

The pap rally is taken over and the crowd is hypnotized. Fortunately Fred finds her whistle patent very easily and discovers its only weakness… The hypnotic power is canceled out by loud rhythmic music. Cue the episode’s musical number.

The town is saved during the catchy tune, and Fred has made friends with the cheerleaders by saving them, but cheerleading is not for her but she’dl totally be down to watch anime together sometime. An enjoyable message about stereotyping in the public school system.

Kevin and Gretel are grocery shopping for their mother, which is already a task considering how their mom phrases what she wants. Of course, the search for “The perfect onion” leads to an encounter with a supervillain – who introduces herself through song.

Her backstory – she was a telenovela star who was written off her show because she couldn’t cry on command, so she tried many different onion treatments until one day a light from the sky gave her the power to talk to onions and now she will make the entire world cry. Her name: Camilla Cebolla.

It’s a great musical number – but only generates laughter from Gretel and Kevin. They both mockingly start to talking to other produce at the store, but Camilla clarifies that the onions also LISTEN to her too, and form a rolling pedestal on which she is carried away. Though no actual crime is committed – the duo must now also chase her down to get the onion they need for their mothers remedy soup.

They encounter Camilla again and this time it's a bit more serious – her onion amplifier needs power and the only way to recharge it is by draining the powers of a superhero. She captures Gretel and knocks out Hamster with her super onion breath. Knowing his mom is the keeper of the remedies, and gets a cure for bad onion breath from her, which may or may not include revealing a deep, dark, secret into a cup.

Gretel is trapped still and the onions of the world are being summoned through the onion amplifier, with the plan of bursting them all simultaneously to drown the people of the world in their own tears. She calls the onions her underlings, though she never asked them what they think of her plan. We already know that they listen to her, and now they don’t like what they hear and retreat to the fields, crops, and burgers from which they came.

Hamster and Gretel are ready to head back to dinner but Kevin keeps dwelling on her origin story. Powers that came from the sky. Sounds a bit familiar, doesn’t it?

We see the alien ship and voices from within from the first episode hovering saying that their experiment had been a failure, and that talking to onions being a superpower wasn’t a winner.

This episode of Hamster & Gretel is now available on Disney Channel, the DisneyNOW app, and Disney+.